There is a fabulous little movie out now that should be seen by anyone who’s ever been to Northern California Wine Country, ever drunk Northern California wine, has any interest in wine or just wants to see a sweet little film with engaging quirky characters. It’s called Bottle Shock, named after the short-lived flatness that happens to a bottle of wine after it’s shook up.
In this case, the Bottle Shock wasn’t short lived. The film leads up to the historic Judgment of Paris in 1976 when France’s premier wine critics gathered for a blind taste test pitting the best they had to offer with the wines of Northern California. I won’t be giving anything away if I tell you that California won and won triumphantly. The event toppled the idea that only the French could produce good wine and opened the door for quality wines from all over the world. (And probably lead to the migration of many UC Davis Vinoculture grads who suddenly found themselves in demand in French wineries.) Even in France, it may have precipitated the rise of the Garagistes, renegade French winemakers who made quality wines on a shoestring and thumbed their noses at the old Chateaus.

But I digress. I won’t attempt to review the movie. I’ll let the inestimable Roger Ebert do it. I’ll just tell you what I loved about it as an amateur winemaker with a fledgling vineyard in Sonoma.

First of all, don’t be swayed by the nitpicky critics who say there are some composited characters, fictional characters and key characters who don’t appear. For instance, the winemaker at Chateau Montelena — the winery that won the white category and the winery that is the main focus of this story — was the famous Mike Grgich. He’s not in it. He refused. So who cares? He would have been one character too many as the focus was on the rocky relationship between father and winery owner, Jim Barrett, and his hippie son, Bo, who eventually became the winemaker at Chateau Montelena. 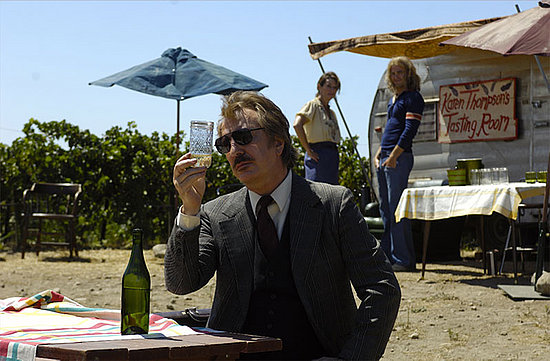 Alan Rickman, as Steven Spurrier, samples Napa wine in what was a not atypical tasting room back then.

What the movie DOES get right is the way Napa was back before all the gentrification and hoopla. The people who made the wines were first and foremost farmers, secondly unpretentious but passionate, and you could always find a world class glass of wine in the dustiest cowboy bar. Back in the mid Eighties when we first arrived in California and started visiting Napa, here was the typical tasting scenario (unless you went to Mondavi or Beaulieu Vineyards). You’d get directions at a convenience store and drive down some windy dusty road. You’d probably end up at a barn or the back door of a farmhouse. Around the corner would come a guy on a tractor who would turn out to be the owner. He’d bring you into his kitchen, pour you some of his wine and chat about his “Cab”. There were precious few gift shops and no $40 dollar tastings (with the souvenir glass). You learned about the wine from the guy with dirt under his fingernails.

Things have changed. In Napa! I’m here to tell you that you can still find this down-to-earth farmer spirit alive and well in Sonoma. It’s no accident that in virtually every scene in Bottle Shock, Sonoma County stands in for Napa. In fact downtown Sonoma even stands in for Paris in one scene. Look closely at the wine shop run by Steven Spurrier (played by the brilliant Alan Rickman). It’s Della Santina’s Enoteca and Della Santina’s Trattoria just off Sonoma Square. The vintage cars were provided by one of Sonoma County’s many car clubs. (Note: if you are dragging along a gearhead who has no interest in wine, Sonoma’s the place to go to see cool cars.)

Chateau Montelana? Not. It’s Buena Vista Winery just down the hill from our property. In fact, we were convinced you could see our land in some of the shots. We’re in Bottle Shock!

But more importantly, the spirit of this movie is alive and well in Sonoma. While in Napa, you’ll sit in bumper to bumper traffic, be awed by fantastic multi-million dollar tasting rooms filled with art and fight through tour buses full of people. In Sonoma, you won’t have to go very far to find yourself traveling down a dirt road to meet some guy on a tractor. If wine isn’t your scene, Sonoma has diversified to be one of the largest and most passionate proponents of organic and heirloom produce and artisanal products. So skip the wine and do a goat cheese, heirloom tomato, Crane melon or Gravenstein Apple tasting. Or try any of the free-range beef, lamb or duck products made by people with the same passion and hands-in-the-earth attitude as the characters in Bottle Shock.

Should you think going to Sonoma means you aren’t really at the epicenter of the wines that changed the world, I should also note that the grapes from that award-winning Chateau Montelana Chardonnay that shook up the French were actually grown in Sonoma.

So I’ll see you in Sonoma. And if you get up here quick enough, you can see Bottle Shock the way it should be seen: on the Sonoma Square, in the historic Sebastiani Theater, surrounded by locals yelling out: “I remember when that happened.”

I’ve got to reveal the best line in the movie, courtesy of Alan Rickman as Steven Spurrier, the priggish, English Francophile wine shop owner:

For exact filming locations (and Google maps to find them), check out this site from the Sonoma County Website.