I wasn’t expecting much from the BlogHer ’08 Conference. Just by the nature of Blogher — “The Community for Women Who Blog” — which is basically an advertising network. I thought I’d be surrounded by Mommybloggers, Craft Bloggers and “women’s issues”. Not that there is anything wrong with that, but it’s just not what I’m into. But I got in so cheaply with my student ID (and the whole conference, which was underwritten by multiple sponsors, was pretty cheap to begin with) that I thought “One or two good technical tips and I’ve got my money’s worth. I could even skip the second day if it’s boring.”

Well folks, I will be going back for that second day. And probably wishing that my cheapo student pass would get me in for the third day. It was that good. Although it wasn’t an auspicious beginning.

Actually the immediate beginning WAS auspicious. The first person I talked to was someone whose blog I’ve actually read and enjoyed: Boobs, Injuries and Dr. Pepper. Check it out. You’ve got to love a Southerner named Crystal who describes herself as “Not Even Remotely Famous and So Much Fatter Than Dooce.” And it was kick to see someone I’ve known in Cyberspace materialize in the flesh in front of me. So to speak. 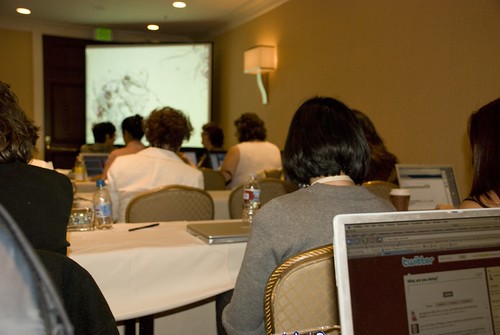 Amazing how many people were Twittering, Facebooking, blogging and MySpacing
during the conference. Hey, stop tapping and listen. The speakers had a lot of Top Tips.

No, that part was good. Then after the welcome address, the organizers did something they called “Speed Dating for Bloggers“. Which meant two of us from every table had to get up, move to another table and introduce ourselves. Luckily most of the people at my table were cranky and refused to move, so people came to us. And most of them were Mommybloggers or PR or Corporate people who were apparently there in swarms to get a handle on “this woman blogger thing” and pick our minds about ways to get us to buy more Schtuff. Then there were the announcements about the “Lactation Lounge” and the playgroup sign-ups (lots of kids in evidence).

I started evaluating how soon I could leave. But the first break-out session advertised itself as technical so I thought I’d stick around for that one. Glad I did. It was worth my price of admission alone. In the first 20 minutes. Between the three uber-techie CyberGals who led it, I figure I gleaned enough good technical tips and links to cool blogging tools that I saved myself weeks of research and months of tears. Then we broke out further into platform-based subgroups. There Tech Goddess Shazia Mistry gave me enough information about WordPress (the platform I’ve been meaning to migrate to for six months) that I’m getting that done by next week. She was generous enough to give us all her card and Twitter address. Hope she knows what sort of Pandora’s Box that’s going to open. But I’ll certainly be visiting her website for Top Tips. 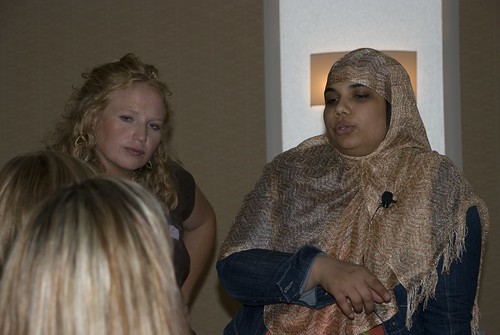 Shazia Mistry, on the right, (www.shaziamistry.com) really explained WordPress.
The woman on the left, God Bless Her, was that conference person who always asks
the dumb questions so you don’t have to.

The next break-out session on “Content Syndication and Promotion” gave even more time- and tear-saving insider info. It all ended with a rousing “Writing Workshop” led by the most excellent Amy Gahran (finder her at www.contentious.com) which was less “workshop” than redirecting, motivating kick in the pants. Good, good, good.

There were also some nice little touches that I tend to think only a conference run by women would include. Like a recycling area where you could dump the stuff from your Swag Bag that you didn’t want. It served a three-pronged purpose: 1) you didn’t have to lug home stuff just to throw it away 2) you could put it somewhere where whoever wanted an extra one of those rip-off Magic Eightball thingies could get it and 3) it alerted advertisers, by the returns, of just what crap was really crap (like those Magic Eightball thingies.)

And did I mention the free lattes and mochas they had on offer? Maybe I’m jazzed because I got way overcaffeinated. But it was definitely a worthwhile time expenditure. 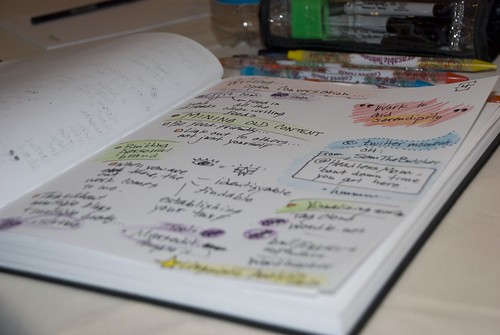 Haven’t seen this sort of color-coded note-taking since I dated a guy in law school.
These notes are from Kate Rutter who sat next to me at the last break-out session.
See her blog (with the same sort of doodles) at www.intelleto.com)

So what did I learn?

1) Twitter is an incredibly powerful community building tool for driving readers to your blog. (Not the simple updating service I’ve been using it for.)

2) There’s a definite hierarchy of bloggers. And people like me who are still on Blogger/Blogspot are at the very bottom. (NOTE TO SELF: Get sorted out with WordPress and a dedicated domain name.)

3) I have pages and pages of links to services, widgets, plug-ins, etc. that I still need to investigate. And real world feedback on what worked when and for whom.

4) Take more cards. I went through all my Moo cards in the first four hours.

5) Take public transportation! Do you have any idea what the Union Square Garage charges for six hours of parking? Hint: more than I paid for the conference.

6) It’s really not cool to take an image from a Google search and use it in your post without attribution. Doh! I thought the attribution was coded in. (Okay, top-most image stolen from www.concurringopinions.com)

Oh, and I met some really interesting bloggers. Now I need to compile a blogroll of all their blogs.

Excuse me now. Got some blogs to read. 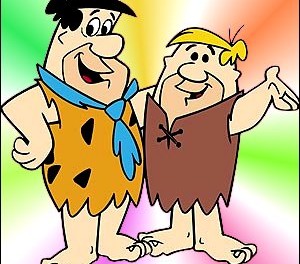