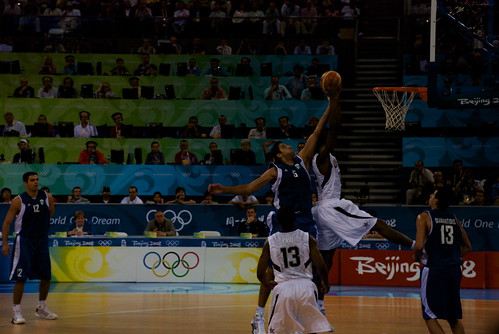 This post is going to be a challenge for me. Tonight’s scheduled event was Men’s Basketball. Now in the interest of full disclosure, I know less than nothing about basketball. I went to a game once. It was back in Ninth Grade. I had a friend on the team. I brought a good book. My husband is English. That speaks for itself. But a good blogger should never let total ignorance get in the way of good reporting. So here’s my wrap-up of Olympic Men’s Basketball: USA vs. Greece.

Now the US Team, I’d heard something about them. I think it was something about a couple of guys getting arrested for assault and rape. Oh those boys. Anyway, I’m not here to dwell on that. I had heard that a few of the USA Team members were sort of good at this game. I had my doubts about Greece. Could they find any tall Greeks? (Note: I needn’t have worried on that score. Those were some Big Frickin’ Greeks.) 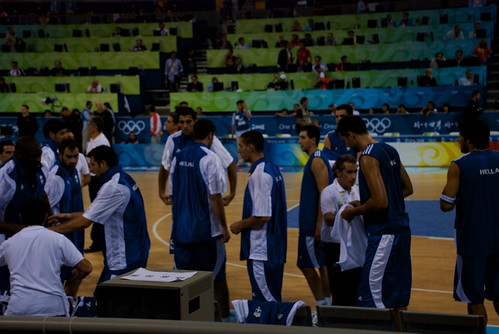 I wasn't kidding. Look at the ref. These are BIG Greeks.

Basketball was held in another venue from the ones in Olympic Village. I’m not sure of the name or nickname of this one, but it looks like a giant block of Tofu. Or those dehydrated noodles that come in a clump, so you can just add water. No matter, our seats were astounding! As we walked in, the US Team was practicing and I could reach out from my seat and give Kobe five everytime he passed on his way to the hoop. 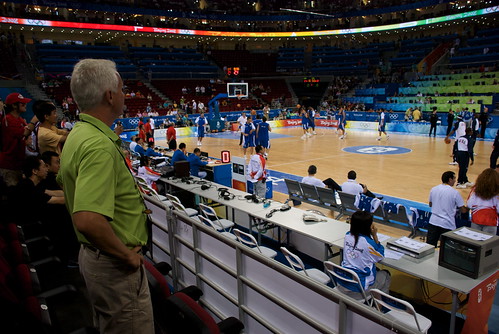 These are the seats, my friends. We were high fiving Kobe!

The game started, and right away, a penalty was called against Greece. From what I could tell, it was for swearing. I’m not sure how anyone could tell, in Greek, that what they were saying was swearing. But I’m pretty sure there is no swearing allowed in basketball. Certainly not at the Olympic level. Which made me notice that Sting appeared to be the referee. And that a guy named Bosh had some very cool dreadlocks. 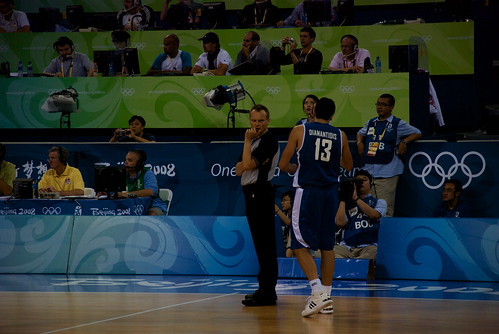 So, on to the game, yes. Guys from both sides were putting balls through the hoop. The Greeks even got two points ahead for one brief moment. But what really fascinated me is that every time a player fell, at least two young Olympic volunteers in their little white and blue T-shirts would come running out and wipe up the floor with official Olympic towels. I guess the players were sweating buckets and the perspiration was a slipping hazard. 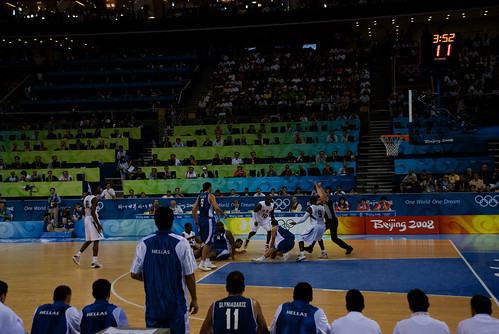 I did not know that there was so much falling down in basketball. 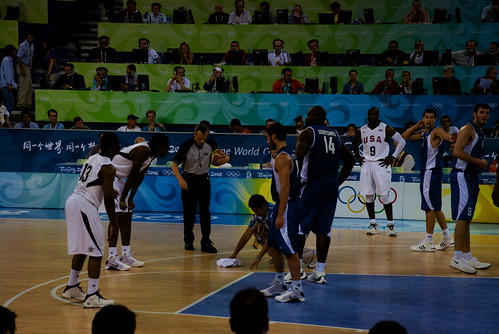 Luckily they had these great Towel Boys who mopped up every spill.

Before you knew it, it was the end of the quarter (or is it called the period in basketball?) I braced for those damned Fuwa to come trundling out. Instead out ran a contingent of women wearing nothing but chiffon scarves who proceeded to do a provacative version of a Greek Taverna dance to the Zorba the Greek theme. 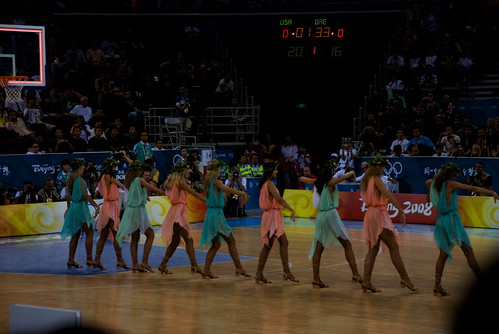 A lovely interpretive dance to the Zorba the Greek tune.

Then more balls dumped in hoops and guys running from one end of the court to the other.

Now it’s after the second period, and again, I braced for the Fuwa. Nope, out came what looked to be the Chinese Hooters Girls who did a sexy routine to Miserlou. The Pulp Fiction surfed up version. 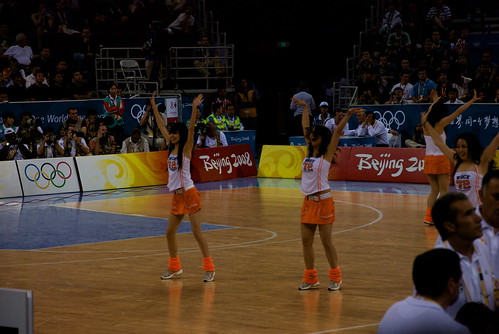 More running up and down the court and throwing of basketballs into baskets. By this time, the Greeks were so far behind, it wasn’t even kind to make note of it. However, they did continue to score now and then, so kudos for that.

Now it’s Half-Time or whatever the middle part is in Basketball. Again, I’m looking for those pesky Fuwa, who so far haven’t made a peep, even on the Jumbotron. Nope, some really interesting acrobats come out and proceed to jump on trampolines, turn somersaults and dunk baskets all to Rap songs. Let’s see Kobe Bryant try that one. Then three of the tumblers left the scene while the others proceeded to bounce up and down. The three came back, dressed in jumpsuits with a hose and proceeded to dance to the Ghostbusters Theme. Not quite sure what that had to do with anything. Maybe since the Greeks got Zorba and Miserlou, this was a nod to our culture. 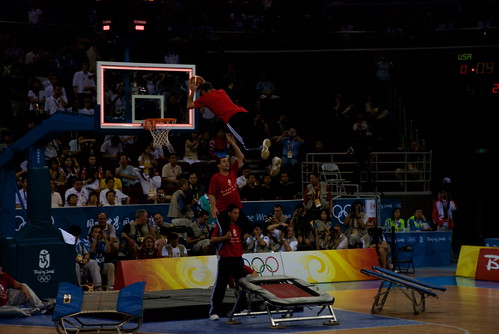 This may have been a nod to our culture. Tumbling dunkers who performed to rap songs.

Play starts up again. More balls in baskets. Then a brief moment of excitement as the Jumbotron shows us that Evander Holyfield is in the audience. Except, his seats weren’t as good as ours!

Back to the game and the Greeks are struggling bravely on as the point spread starts to multiply. But they are game as are their incredibly vocal fans. One contingent of Greek fans was way up in the nosebleed section, but they were screaming and waving Greek flags at everything that happened. Even the Olympic Towel Boys were working overtime at this point.

Now the third period (Quarter?) ends and I’m thinking I after the first two acts, I’m starting to feel nostalgic for the Fuwa. Out come the Vegas Hooker Cheerleaders and the Chinese Hooters Girls run back in shaking their pom poms. 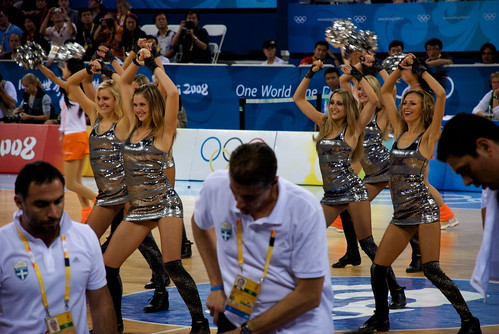 The Vegas Hooker Cheerleaders strut their stuff. The poor Greeks are too focused on strategy to watch.

Then the tumblers come back, but since they can’t set up their trampolines with the game set to resume soon, they just ogle and gyrate with the girls. I’m thinking maybe the Fuwa aren’t so bad, when. . .wait for it. . .out comes the inflatable Fuwa! (Now if you read my last post, you know that the Chinese seem to have many versions of Fuwa, each appropriate to their sport. We had Tumbling Kung Fu Fuwa for Gymnastics and Inflatable Pool Toy Fuwa for Swimming. I was hoping for Really Tall Fuwa for Basketball, but it looks as if they had to borrow the swimmers’ Fuwa.) 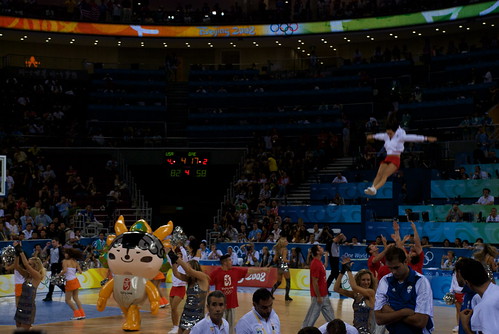 For the grand finale, we had it all. Jumping Cheerleaders, tumblers, Chinese Hooker Cheerleaders. . .AND FUWA!

So final quarter of ball throwing, free throws, balls through hoops and it is mercifully over. Mercifully for the poor Greek coach. He was well on his way to a coronary, yelling at his players, arguing with the judges. He looked like he would have been a lot happier with a small restaurant back in Athens serving Moussaka to tourists. Still, I’m giving him and his team kudos. They played their hearts out and did score 69 points against Kobe and Friends. That’s something to brag about. 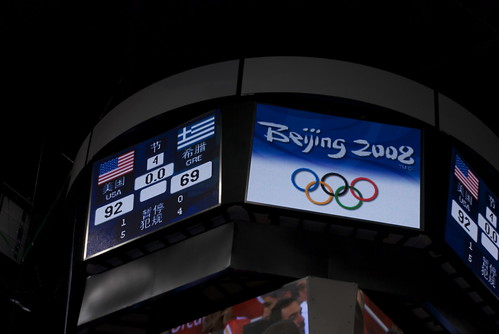 The Final Score. Who saw THAT coming?

So there you have it, commentary unlike anything Bob Costa could give you. But I know that’s why you come to this blog. 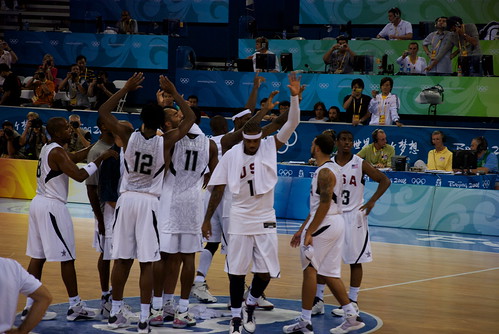 Tomorrow, Women’s Individual All-Round Gymnastics Finals, then in the afternoon, Women’s 10,000 Meter Final and Men’s Shot Put Final. So I’m assuming, I’ll be seeing three medals ceremonies. What a way to close our trip to the Games!

See all the pictures from my Basketball Experience here. 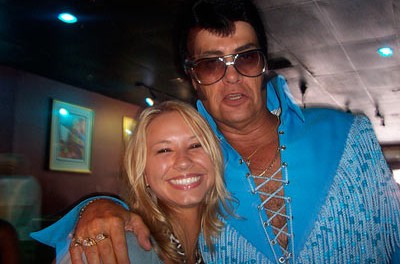 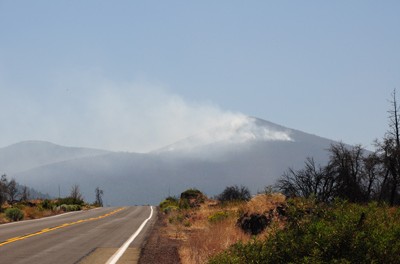 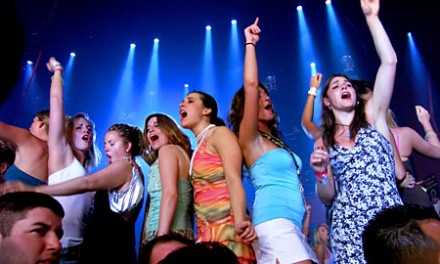