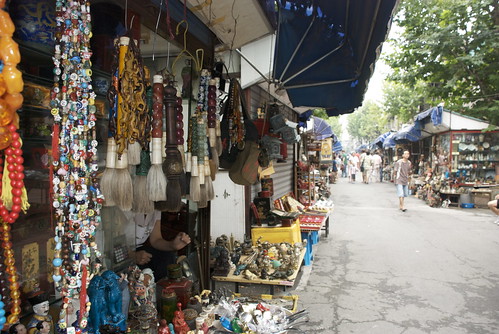 The Olympic portion of our China trip is over, but I feel like we saw everything. We saw Michael Phelps swim, Bolt run, the US women gymnasts medal and Kobe and crew trounce their opponents.  So we set off for a two day stopover in Shanghai before heading home. And we landed right in the middle of the REAL China or at least the China that resembles what I’ve come to think is typical of much of Asia.

Beijing was almost too good to be true: everything new, up to date and modern, not a speck of trash on the street, everyone friendly and smiling. I’d heard that the Chinese government had agreed to crack down on street vendors who sold unlicensed knock-offs. But you couldn’t buy ANYTHING on the street. There were no postcards to be had, no stands selling Olympic stuff. There was one licensed “SuperStore” that sold official Olympic gear but it was miles away from the venues.

Then Shanghai: noisy, dirty, unbelievable wealth next to unimaginable squalor, street vendors everywhere, aggressive panhandlers hassling you to buy fake Rolexes, and millions of people living out loud and living in the streets. It’s what we’ve come to expect– and kind of enjoy about Asia– after visiting Malaysia, Hong Kong, Indonesia and Thailand. I’m not sure why it’s so different here. Has the Chinese government remade Beijing, but not bothered with Shanghai? Or are Beijingers naturally like the reserved, quiet Lutheran Minnesotans while Shanghainese are like loud New York Italians? (Count the stereotypes in that last sentence.) I’d heard that the government was encouraging Beijingers to ensure that foreigners had a good Olympics. And I’d seen the vaguely Big Brotherly affirmations posted on walls throughout the City: “Maintain the Olympic Spirit”, “Make Your City Proud with Olympic Attitude”, “Practice Olympic Courtesy”. But as one of our UPS hosts said, who’d been here off and on for a year preparing for this, “You just can’t fake this kind of warmth forever.” So I’m going to believe that the Beijingers may have followed orders in small things  — like refraining from eating garlic and not pushing in subways — but that the friendliness we experienced was real.

Shanghai is a whole different story, but not a bad one. First of all, we’re back to being about the only white faces on the street. And the street vendors and beggers are convinced we’ve got loads of cash and are ready to spend it. We strolled down to the Bund, the elevated waterside pedestrian avenue that is the favored hangout spot for everyone and his cousin. Children were pointing and staring at us, flocks of people tried to shine Andy’s shoes (even though he was wearing Tevas) and everyone had a fake watch to sell us. 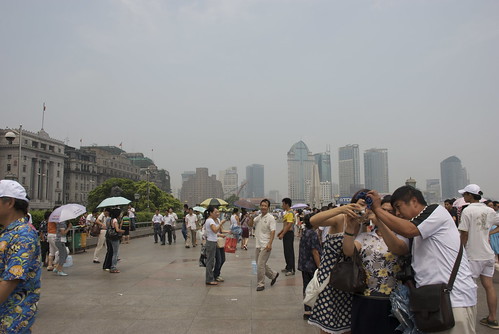 The Bund is where everyone hangs out. You can see Old Colonial Shanghai on one side. And sleek modern Shanghai across the river.

However, I did become someone’s “Western Friend”. A woman walking with her husband, daughter and mother came up to me and asked me if she could take a picture of me with her mother. She explained that her mother was from the provinces and had never been to a big city before. There were three things she wanted to do: spend time with her granddaughter, walk on the Bund, and have her picture taken with a “Western Friend”. Well, that’s what the woman said. Her mother probably said, “I want my picture taken with one of those funny foreigners.” But I cheerfully posed for pictures and even grabbed Andy so they’d get two for the price of one. And gave everyone a Fuwa pin. Now I guess my picture will have pride of place on some wall in Sichuan Province. 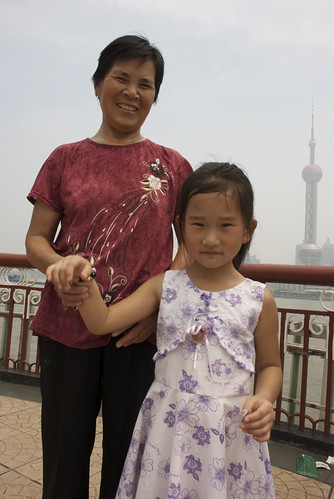 Mom just wanted her picture taken with one of those crazy foreigners. The little girl wasn't so sure, even after I gave her a Fuwa pin. 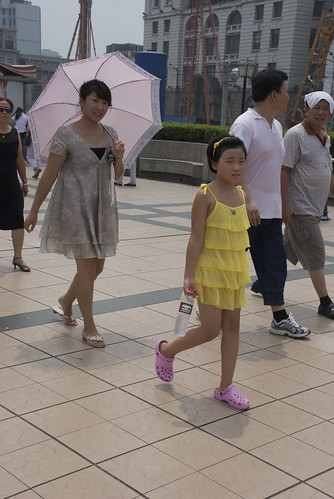 Crocs are the kids' shoe of choice here. And there are two ways to keep cool: an umbrella or a handkerchief.

Next stop was Shanghai’s famous street markets. There’s one for everything you can imagine: pets, antiques, fish, meat, clothes, sex toys. . . 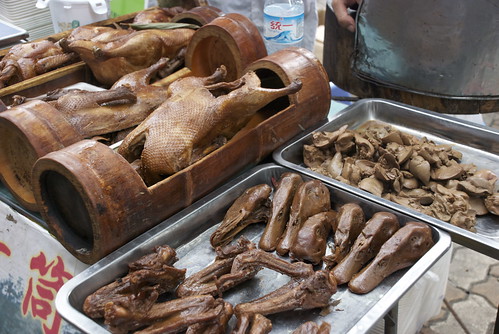 Whole, heads or livers. You can get anything at the Shanghai street markets.

Two things that immediately struck me. The meat market didn’t smell as bad as you’d think it would given that people had probably been gutting fish and poultry for hundreds of years and throwing them in the open drains. Well, the market smelled and we disinfected our shoes after walking in it. But when you got close to the produce and meat, it was the freshest I’ve seen outside of the Sonoma farmer’s market. Each vendor seemed to bring only what they thought they could sell that day. Most of the animals were brought in live then “processed” there. So no refrigeration, no coolers and no one seemed to be getting sick. 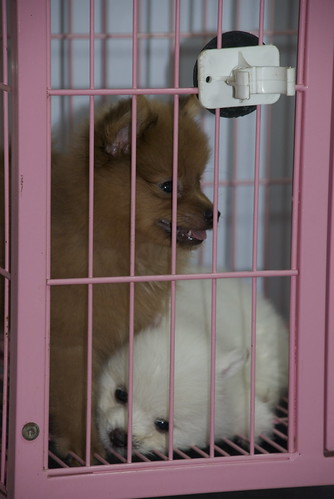 There were miles of aisles of animals at the Pet Market. But the most popular were crickets and birds.

Second thing that struck me: the Shanghainese seem to be cheerfully ignoring the government edicts against shoving, spitting and especially against men taking their shirts off. Apparently, the government thinks this is high on the list of things that will offend foreigners. The Shanghainese don’t care. And at 98 degrees and nearly 90% humidity, who blames them. 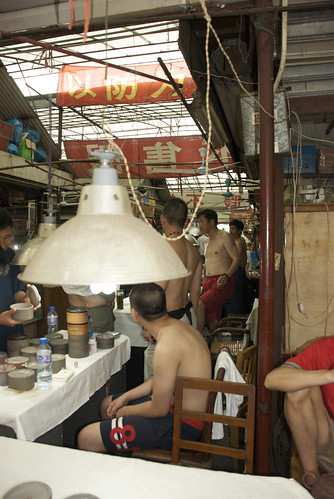 The government says "Keep your shirt on". The Shanghainese say, "Fuggeddaboutit".

As I said, there is a market for everything. But the very best one is the Mao Memorabilia Market. Imagine miles and miles of stands selling the best Mao kitsch ever. We stopped at one stand to buy a bag and a porcelain statue. The proprietress could see immediately that we were connoisseurs and took us up what must have been three hundred year old stairs to view her secret stash of the best Mao stuff ever. Andy suddenly had “shop lock” and couldn’t decide between the large seated smoking Mao or the statue of Mao subjugating the oppressors of the people. He settled for a copy of The Little Red Book. Some light reading for the plane. 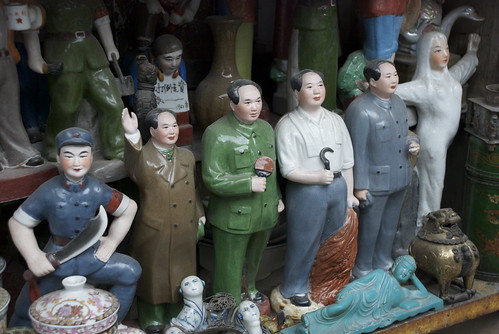 I could have spent all day and all my money at the Mao Market. 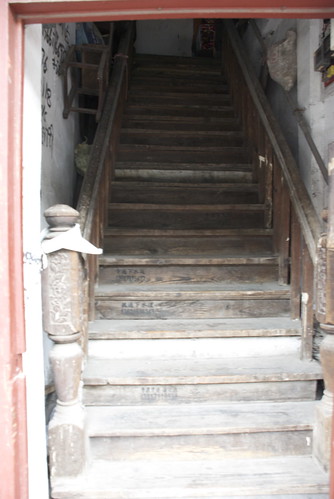 Up the rickety steps to the Secret Mao Annex. 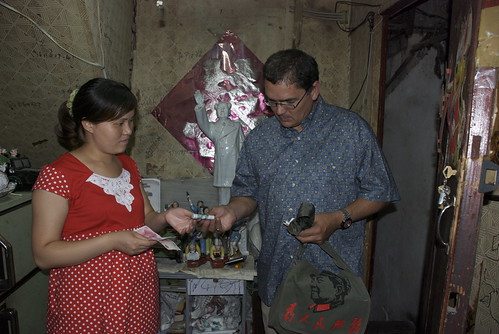 Making a purchase in the Secret Mao Annex. 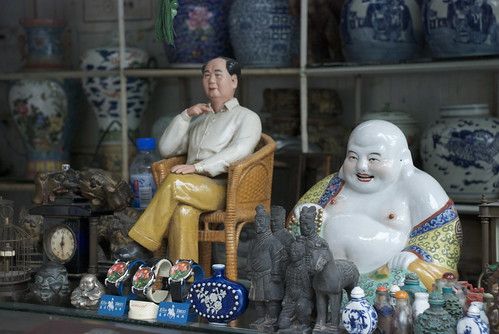 I still say we should have bought the one of Mao having a relaxing cigar.

That about wraps up Day One in Shanghai. Next up, Ming Dynasty era gardens and more of Old Shanghai. See my pictures from Day One here. 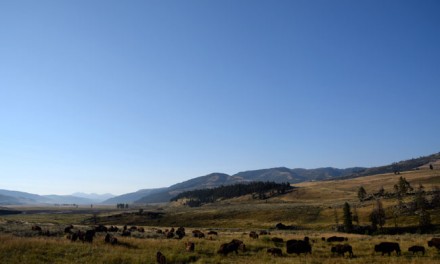 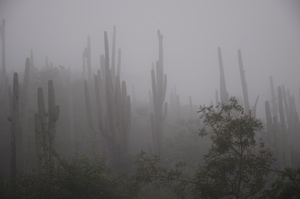