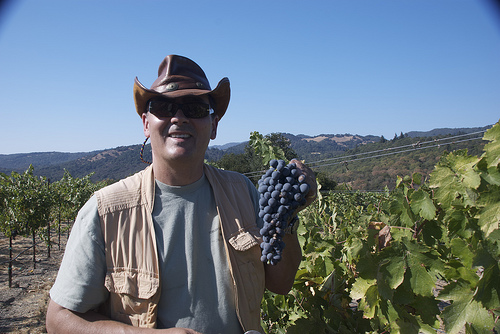 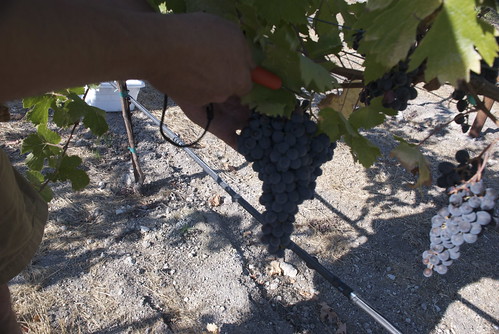 Just as we feared, the unusually warm spring and summer in Sonoma have cause the harvest to happen early and way too quickly for us as we are still putting the final touches on our crush pad. On a routine check of the Brix level Sunday, we suddenly found that our Cinsault was ready NOW. Nothing to do for it but drop everything and start picking.

Of course, that meant no time to get a crew together, so it was Andy and me and the two terriers (not that the terriers were much help.) Luckily the Cinsault is just a blending grape (there are five grapes in Rhone style varietals) and accounts for the smallest number of vines at Two Terrier Vineyards. Smallest still meant hours of backbreaking work as we raced through the rows, picking and sorting grapes, then carting them down the hill to the crush pad. There they were loaded into the crusher/destemmer then transferred into the primary fermentation vat. Add to that starting this process at noon so we were working through the hottest part of a hot Sonoma day. 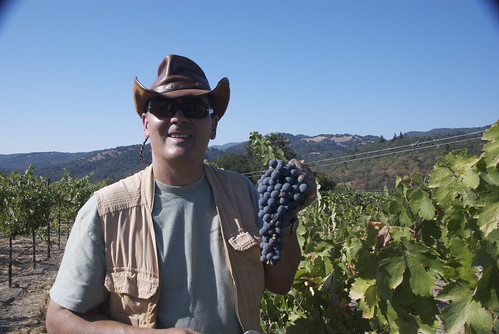 It’s early in the harvest. Which is why Andy is still smiling!

All I could think about as we were stooping, cutting and groaning was that we were taking jobs away from illegal immigrants. Please, open up those borders and let these people in. Please direct them up to Sonoma. Believe me, there are no Americans standing in line for these jobs. We own the vineyard and WE don’t even want this job.

One thing I’ve learned about owning a vineyard: don’t count on friends to help you out. It may sound romantic to come pick grapes, but these things, as we’ve demonstrated, can’t be scheduled. The Brix shoots up, the grapes have to be picked at a moment’s notice and your friends are nowhere to be found. 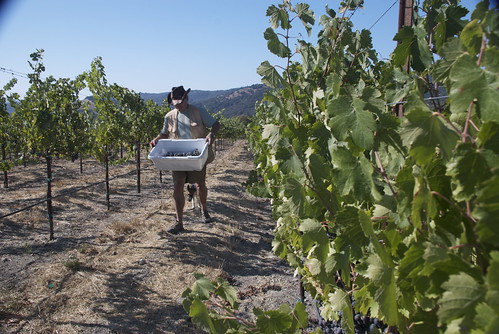 The romance of the harvest: you cut grapes bunch by bunch in the hot sun. You haul them, bin by bin, to the ATV. You take load after load down to the crush pad. Even Oscar looks done in here.

In any case, we did it on our own. And there is a certain satisfaction and pride in that. The crushed grapes are safely sulfited which gives us about half a day to rush to the winery store and get our yeasts which we didn’t even have on hand. Thank all the stars and terriers that our fermenting vats arrived three days ago. Otherwise, I guess the crush would have gone in the bathtub in the barn. 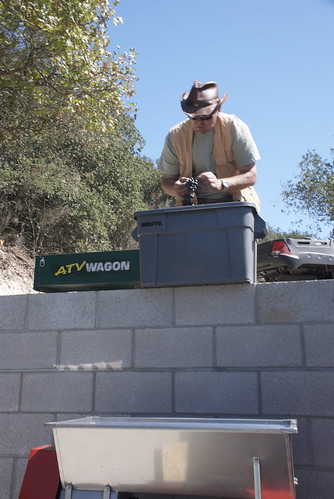 Don’t be fooled by Andy as the model here. As in past harvests, I was the one transferring a quarter ton of grapes from bins to crusher/destemmer. As a physics major, he operates the machinery. Damned Management!

Now I’ll be in Sonoma every day for the next week anxiously taking readings and making desperate calls to the company that is supposed to organize our picking crews. That is if we have any grapes to pick. Somehow, at least three deer have managed to breach the perimeter and get into the vineyard. Best case scenario, they sneaked through the gate as the workman constructed our crush pad. Worst case, they’ve got climbing gear and are rappelling over the fence. In either case, a few deer can strip a vineyard clean in no time. We threw all the juicy stems from the crusher/destemmer out into the vineyard as a decoy. In past years, we’ve noticed that the crusher/destemmer byproduct is Deer Crack, so hopefully we’ll be safe until we can gather a crew to chase them out. Then they can go back to nibbling on my corn which they can do conveniently from the patio in back of the barn.

Speaking of varmints, who or what has been eating all my melons? The teeth marks look too big to be a rat or a squirrel. My money is on a fox as we’re seeing evidence of them around the barn. Once again, where is that terrier instinct when you need it? Oscar was quite happy to cause us to rip up the deck to save him from his standoff with a raccoon, but he’s shown no interest in my marauding melon eater.

That’s the latest scoop. And unless I can scrape the sulfite, grape skins and juice off me and get down to Sonoma’s Barking Dog Internet Cafe, you may not be hearing much from me as harvest continues.

I’ll leave you with the good news: the Cinsault juice tastes incredible. We have high hopes, although a lot can happen between the crush and the bottle. Here’s the bad news: Andy has scheduled an International Sales Conference this week (yes he still has a day job), so it may be just me and whoever I can bribe picking and crushing these grapes. Again, I’m begging: someone open up those borders and point the signs to Sonoma.