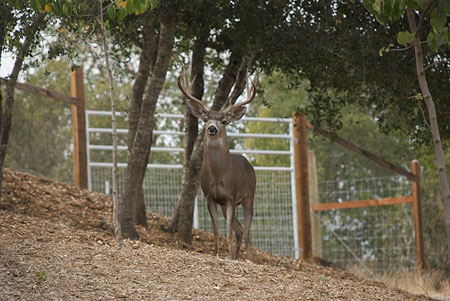 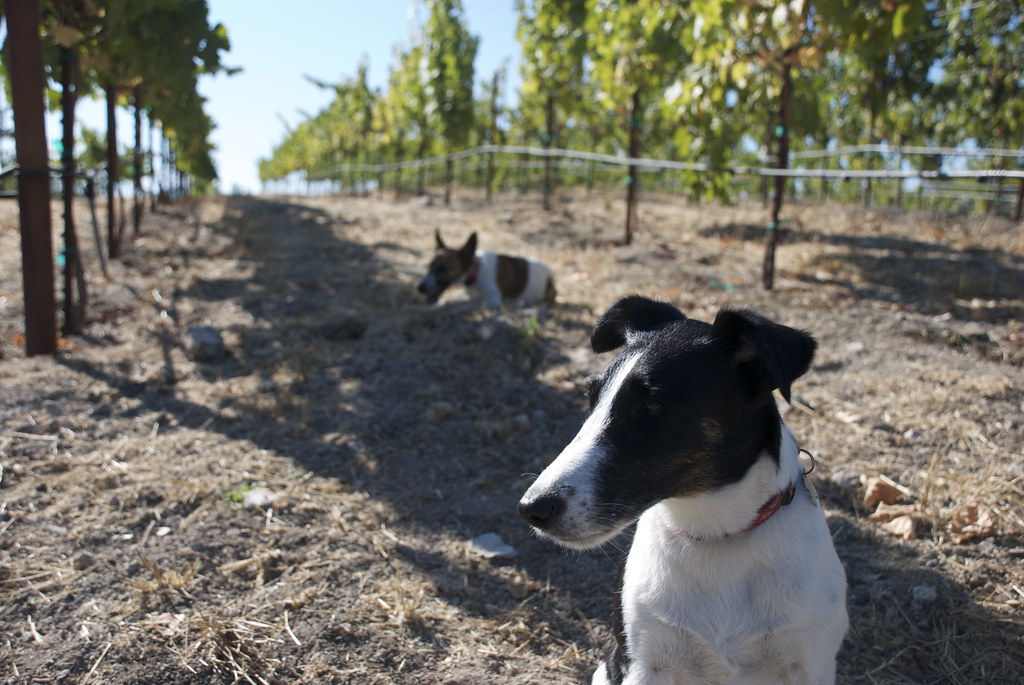 This little section of Sonoma is alive with wildlife, probably thanks to the State parkland trust just over the way. In addition, the small pond we put in on the edge of the woods has acted like a watering hole on the Serengheti. It’s drawing wildlife from everywhere.

After listening to the shrieks, caws, whooos and calls of unidentified animals everywhere, I decided I had to lock the terriers in the barn and get myself to town before I went stir crazy.

I’d barely gotten 20 yards from the barn on the way out the gate when I saw the huge buck that has been leading his harem down to the pond every morning. (Which sets up a huge amount of howling from the dogs. Howling that is roundly ignored.)

This time the buck was alone and just standing in the shadows next to the garage. Of course, it would be one occasion where I would  have no camera with me, but I stepped out of the car to see how close I could get to him.

I kept walking, walking, walking until I could, as they say, see the whites of his eyes. Still no movement. Since I’ve been up here long enough that I’m in early Dr. Doolittle stage of lunacy, I decided to talk to him.

“Hey, shouldn’t you be afraid of me?” No reaction.

I walked closer. “Hey, what are you doing.” Nothing.

Finally I started clapping my hands. If a deer can shrug, this one shrugged then ambled slowly off toward the pond.

It was only then that I took stock of how big he was and how many points he had on his antlers. He certainly had no reason to fear me. I also took his calm as a good sign that whatever animal noises we’ve been hearing at night aren’t from anything that would pose a threat to a deer, a terrier or me. 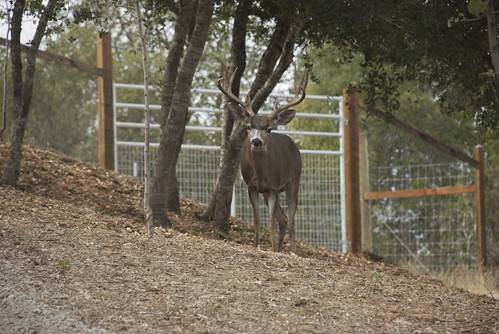 Later eating dinner at the bar at the Girl and the Fig, one of the barmen who recognized me as a semi-local was asking about the grapes.

I told him roughly and heard the old familiar local reaction.

“You know that’s around the area where all the kids used to go drinking.”

“In fact,” he added, “there’s a really cool mountain where you can get up and see all of Sonoma Valley.”

Knowing this was the heart of our property, I played it cool.

“Can you still go up there?”

“No, it’s got a gate blocking the road now.”

“But I’ll tell you about one of the last times I went up there. I was in an open jeep and looked over to the side as I went up that road. There was a Mountain Lion loping along beside the jeep. I don’t think I ever went up there again.”

And that was a nice wildlifey image as I pondered how much distruction an angry Mountain Lion could do to a Prius and how fast I could run from the car to unlock the barn door before three inch talons ripped into my back.

The Mourvedre is 20 Brix which doesn’t seem right as it was 23 two days ago.

The Grenache is 21.25 Brix which is right about where it was.

So the panic that these grapes might need immediate harvesting is off, especially as it’s been cool.

The Cinsault is bubbling along nicely. As it reached 1070 Specific Gravity, I added in a little food since the yeasts are quickly converting all the sugars to alcohol. 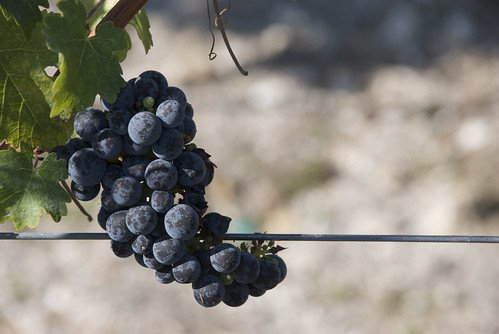 Compared to our Rhone style varietals, our Cabernet vines are real stragglers. These bunches are half the size of the Grenache and Mourvedre.

The temperature, which I’m measuring several times a day seems to be uniformly about 7 to 10 degrees higher than ambient temperature, so it’s generating its own heat evenly and regularly. 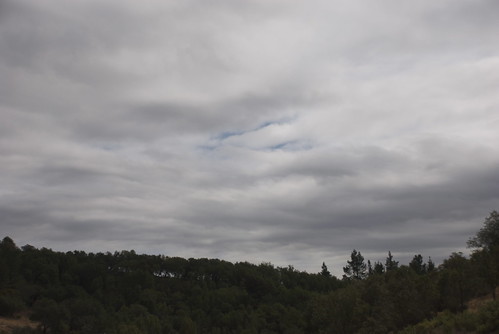 Clouds swept in this afternoon and brought a shower. Not exactly what we want this close to harvest.