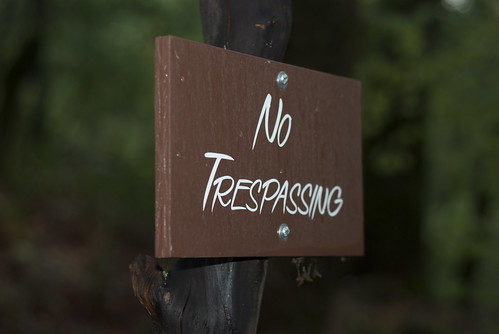 From reading my posts in the last six weeks, you probably think it’s all Cincault, Grenache, crushpads and winemaking here at Two Terrier Vineyards. Actually the winemaking section of TTV — in fact the whole “inhabited by humans” part of the property — is relatively small. You can’t landscape 40 acres. And why would you want to? We’re trying to keep as much natural as possible. The fact that our property butts up on a State protected wilderness area makes it that much easier. The critters are already here. In fact, it’s pretty much their world. We just live in it.

Since the torrential rains of the past few days have cleared. Let’s take a walk through some of the wilder parts of the place. 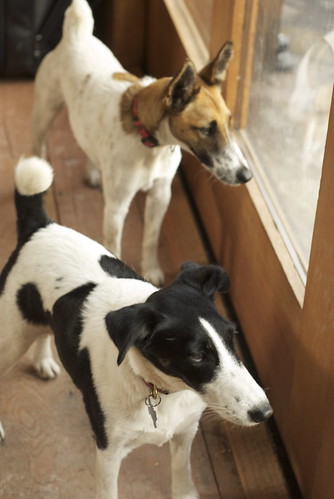 Ready to go? Oscar and Lucy are. 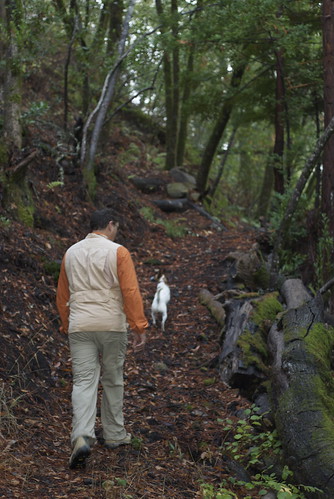 The trail leads down to a seasonal creek. The trails were cut from existing deer trails. Deer make pretty good trails. 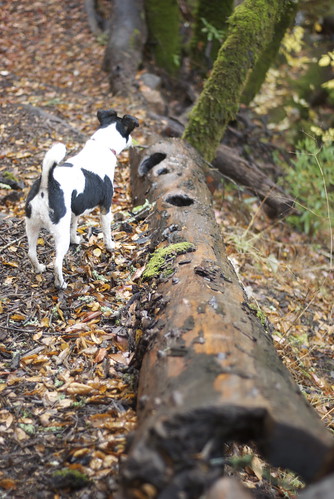 Existing fallen logs were used to mark the trail boundary. You must examine these carefully as small furry critters may be hiding in them. 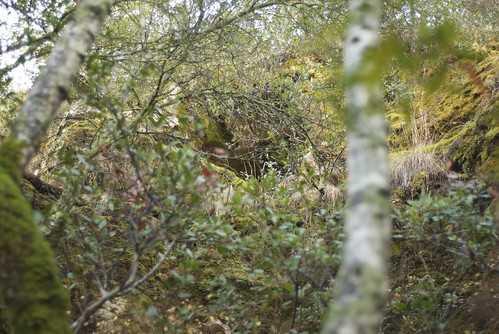 Speaking of furry critters, this cave is where we think a Mountain Lion lives.

Time out here to explain: We had an incredibly talented guy in to cut our trails. The crews working on the barn called him John the Baptist because he always wore sandals and had waist length blond dreadlocks that were full of twigs and leaves. We called him Tom Bombadil after the forest guardian in The Hobbit. John is a master at rearranging nature in a sensitive way so that you have a trail that looks as if it had always been there. Actually it had, because John tries always to make trails on existing deer trails.

John is also fearless. After stumbling over a few steaming, fresh-killed deer carcasses and seeing tracks, he decided a Mountain Lion had taken up residency. And he went to look for it. He thought this cave in the cliff overhanging the trail might be a good place to look, so he climbed up here and found more bones and cat prints. Suspicions confirmed.

Since the Mountain Lion’s preferred way of killing is to leap on you from a great height, I’m not sure how we feel about is lair being over the trail. Luckily, Mountain Lions have a range of about 100 miles so they don’t live in one place all the time. So, just in case he’s in residency, I always send small children and terriers down the trail first. Call it an insurance policy.

Now back to the tour. 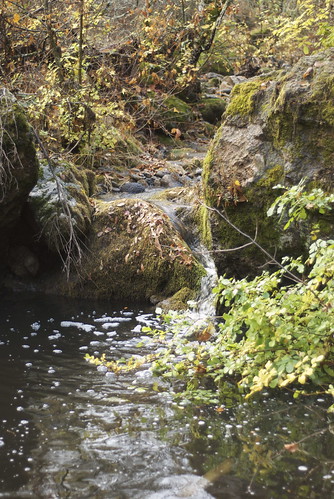 This seasonal creek was a trickle last week. Now it's well on its way to being the roaring river it will be in late Spring. 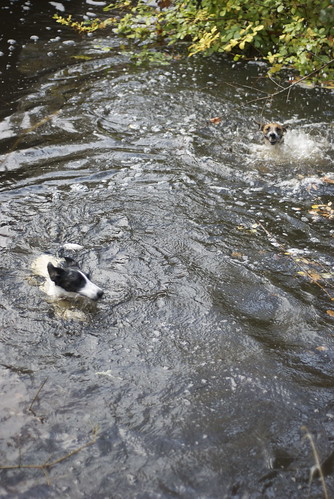 It's a great swimming hole for terriers. 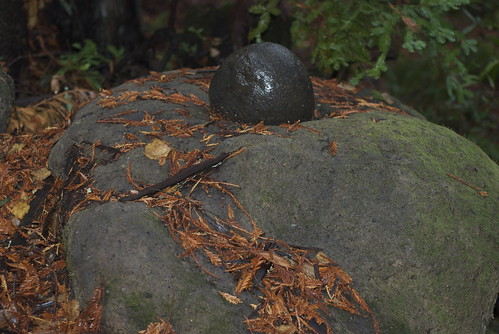 Further on is an old Indian grinding stone. We've found arrowheads down here. It may have been a Miwok migration route. 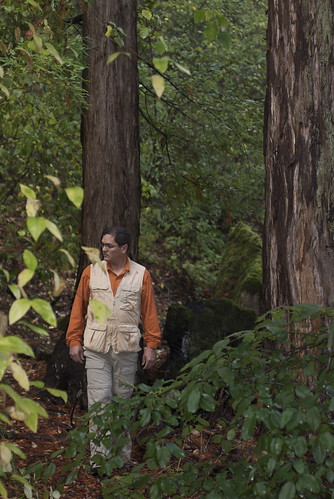 Further down is a stand of 500 year old redwoods. Andy was obviously dressed for safari. 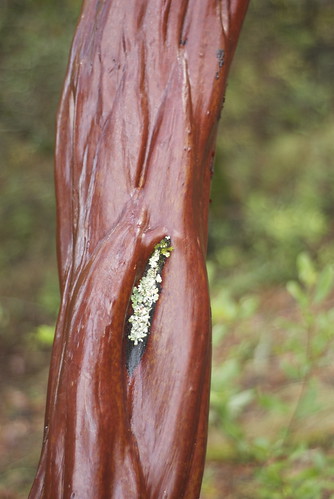 Manzanitas look even more sculptural in the rain. There are hundreds of them down here. 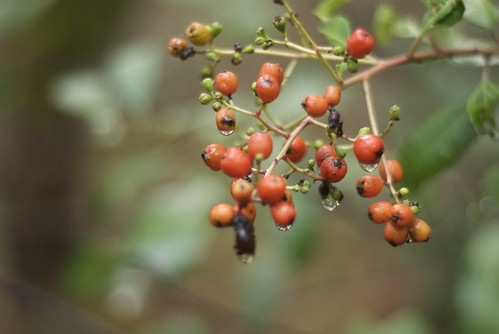 The Toyons are in berry, along with the Madrones. 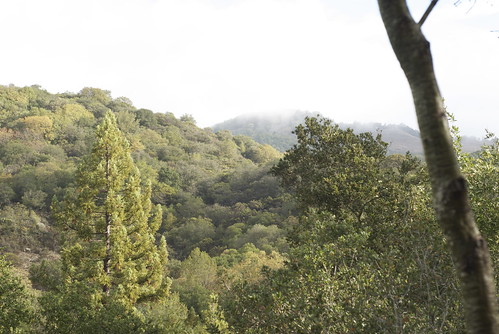 After the long climb up Terrier Mountain, you can see out to the Mayacamas. Well, you could if it were clear. 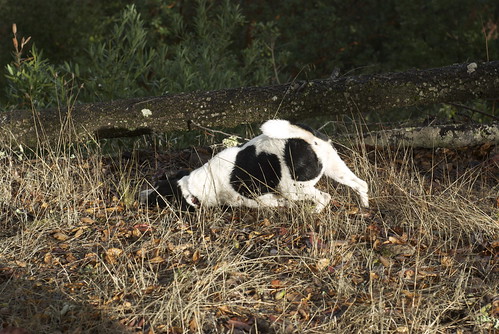 At this point, you might want to dry off on the grass, because we're ready to head back to civilization. 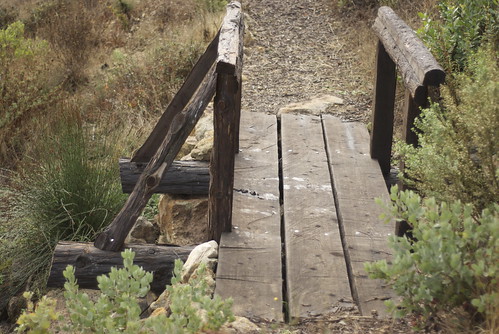 We'll be walking over the Hobbit Bridge that spans the small waterfall that feeds Lake Charles. 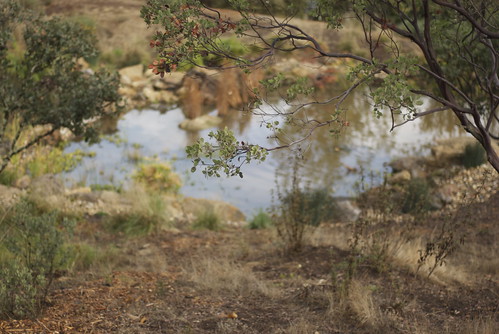 Here's Lake Charles, named after our founding terrier. (Sadly, no longer with us.) 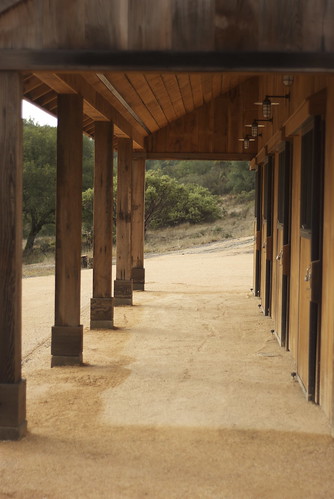 Thanks for joining us. And, if you are a horse, you'll enter the barn here.

Postscript: To find the saga of the 50 year old olive tree, read this. 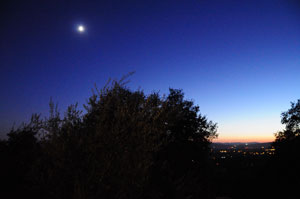