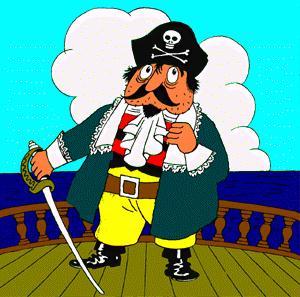 Being married to an Englishman, I often reflect on how lucky we are that Britain is surrounded by water. If it weren’t for the North Sea, the English Channel and the Atlantic, the rest of the world would have to dig a trench around England. Because they are eccentric to the point, sometimes, of batshit crazy.

One of the weirdest things about the English is how insanely attached they are to their crappy children’s programming of the early Sixties. I know there are legions of American Baby Boomers who wax nostalgic about The Brady Bunch and Leave It To Beaver, but at least those shows cost more than $1.98 per episode. Yeah, I know some American shows had shoestring budgets. Remember how Lt. Uhuru’s communications panel on Star Trek, upon close examination, wasn’t much more than a board with some randomly blinking Christmas lights tacked to it? But you’ve never seen cheap, low-budget TV until you’ve seen British programming from the Sixties. Remember the Daleks in Dr. Who? I think they were actually painted tin trash cans. The one thing that defeated them was that they couldn’t climb stairs. How’s that for avoiding the need for expensive special effects? Just film the whole thing near one of those tower block Housing Projects (or Counsel Estates, as the British would say) and — Hey Presto!– have your hero just run up the stairwell to defeat the Forces of Evil.

It wasn’t that technology was lacking in The Sixties. Bugs Bunny cartoons even from back in The Fifties are still masterpieces of animation. At the same time across the pond, my husband was watching the excruciatingly poorly drawn Caption Pugwash (see above.) This is animation so bad it looks like cardboard cutouts with some moveable joints. Was England really that poor compared to America that they couldn’t afford a few low-paid artists to actually, you know, animate their cartoons? Was it our Space Program that accounts for the marked technological superiority of our cartoons? At least when we produced something low tech, it was Gumby and Pokey. 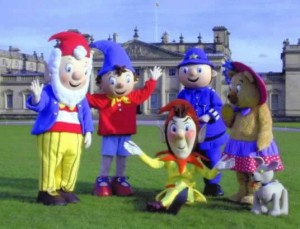 Long before the TeleTubbies, Brits were debating whether Noddy and Big Ears had an “inappropriate relationship”.

I guess what saves classic British television, and makes people like my husband and his British friends go all teary-eyed with nostalgia at the mere mention of a program or character, is the quality of the writing. If you listen closely to the dialogue, you can just tell there were subversive Liberal Arts majors from Oxford and Cambridge writing this stuff. So they probably were the scholarship boys and weren’t Posh enough to get into banking, but perhaps their class anger contributed to the snarkiness of their writing.

What I’m talking about is that British children’s programming was just CRAMMED with inappropriate references, gay subtext and double-entendres. Which brings me to the aforementioned Captain Pugwash. One of the things that I’m convinced forces every former British schoolboy to clutch the memory of Captain Pugwash to his heart is the widely held notion that his “crew” included characters such as Master Bates, Seaman Staines and Roger the Cabin Boy. (Check with a Brit friend if you don’t know what “Roger” means in Blighty.)

Our story reaches a dramatic turn about ten days ago on vacation in Puerto Vallarta. Andy and his oldest friend, after several tequilas, turned the conversation, as Englishmen will, to their crap children’s programming. A few minutes of trying unsuccessfully to explain Captain Pugwash to the mostly American group, led to Google. Where Andy and Keith were shocked to discover this article. Yes, the whole “dirty crew” of Captain Pugwash appears to be an urban myth. In fact, the writer of the series successfully sued the Guardian for referencing the myth. Turns out it was Master Mate not Master Bates. The cabin boy was Tom. And no one has any evidence that there ever was a Seaman Staines. Have you ever seen two Englishmen suddenly morph into 6 year olds who’ve just been told there is no Santa? It’s not a pretty sight. Even with a few tequilas under your belt.

Of course I know it’s dangerous to slam classic British children’s television. I know I’m risking having hundreds of Englishmen show up at my door to pelt me with soggy vinegar-soused chips. But I thought someone should say that the animated emperor has no clothes.

Not that I think this post will change anything. Faced with dozens of articles confirming that Captain Pugwash’s dirty crew did not exist, Keith turned to me, tears welling in his eyes, and said:

“You can’t believe EVERYTHING you read on the Internet.”

It’s just too painful for Englishmen of a certain age to contemplate a world without Seaman Staines. 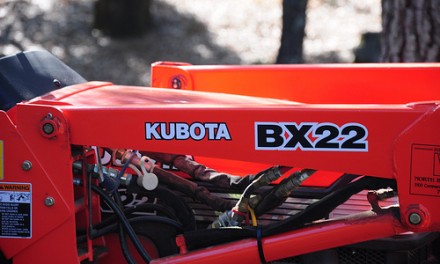 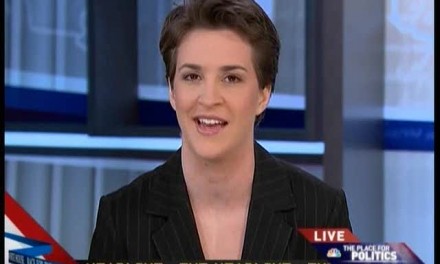