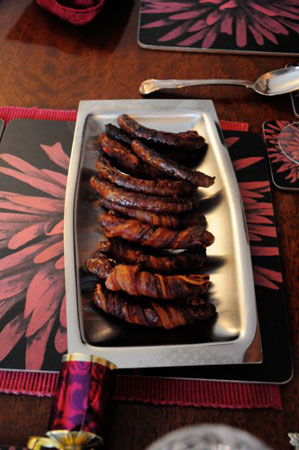 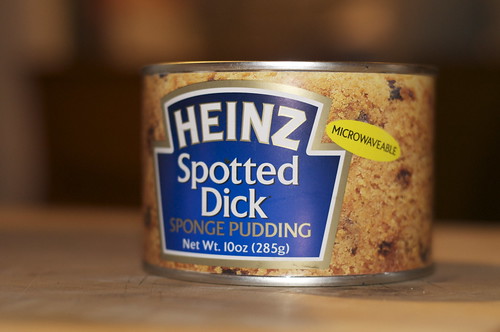 After more than 20 years married to a Brit, I’m still amazed at their eating habits. Not only do they eat strange stuff like Marmite and Lucozade, but they give it bizarre names. Like Spotted Dick, Toad in the Hole, Rumbledy-Thump and the the ever amusing Drowned Baby. Add to the confusion, the tendency they have to call every dessert, whether it’s cake or ice cream or a fruit tart, a “pudding”.

I’m still not used to Andy calling the evening meal “Tea”. It’s especially odd when he comes home and asks me: “Have you given the doggies their Tea?” One day he’ll find me serving Darjeeling to the terriers while Oscar wears a bowler and Lucy a large floppy gardening hat.

Oh, I could go on and on. And I’m just talking about the English here. Let’s not even bring in the Scots and their haggis, which is sort of an offal and oatmeal pudding cooked in a sheep’s stomach.

But the strangest thing to me about British eating habits, is not so much what they eat, but what they don’t eat. Every country has food that the rest of us think is odd. Ever seen grilled grasshoppers in Thailand? (Surprisingly good and crunchy.) Or abalone liver served in Japanese restaurants? (Not so good.)

No what is odd about the Brits is what they WON’T eat. Not just a thing or two, but whole food groups. Mainly vegetables. Any former student of a British Grammar School (which is sort of the American equivalent of an Advanced Placement School) will not, under any circumstances, eat beets. Now I can understand not eating beets the way the British cook them — boiled until they are a pulpy pink mess. But the way I was taught to cook them: choosing the tenderest organic beets of all colors and slow roasting them until the sugars caramelize. Well, it just criminal to avoid those. However, Andy cannot be persuaded to try one. In fact, if there is a speck of beet juice anywhere that is allowed to touch any of his other food, he can’t eat that. Recently, he announced he didn’t even want to smell beets on my breath. So beet cooking is going to become a stealth activity at our house, reserved for those occasions when he has a business trip. I’m planning to grow beets in my organic garden. I’m wondering if the beet ban will extend to any vegetables grown within a 2 foot radius of a beet.

While beets have got to be the most avoided vegetable in England, it should be noted that they aren’t really that keen on vegetables in any form. I grew up in a household where dinner was cooked by color. You always had an orange vegetable, a green vegetable and maybe a red or yellow one to balance it out. The British are quite comfortable having a dinner that is, at best, predominantly brown, at worst, a pale gray. Those pub dinner signs in England that advertise “meat and two veg”? By veg, they usually mean beans and potatoes. I once had a pub lunch and complained that I’d only been served one veg. I was told that the slice of bread was my second one.

We do quite a number of festive dinners which somehow tend to be dominated by our British friends. So far, the only colorful vegetables I’ve been able to get down a majority of them are peas and carrots which are unfortunately, the least nutritious and least interesting of all vegetables.

Oh, I’ve tried the health argument, the aesthetic argument and every other argument to promote vegetables. The British rebuttal always comes down to roughly the same thing.

“What can you Yanks tell us about food? You’re a nation that eats peanut butter.”