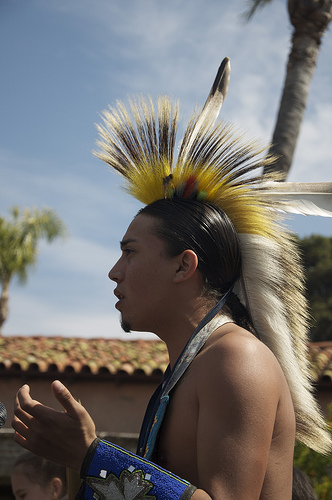 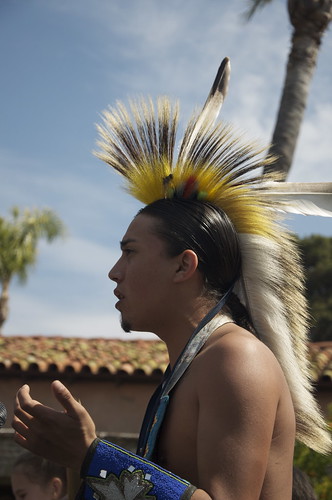 I was hoping the St. Joseph’s Day festivities at San Juan Capistrano would be more local festival than slickly produced event, and luckily it was. To celebrate the return of the swallows to the Mission, I think the town had corralled every school kid from 5 to 18 to be in the ceremonies. You had First Graders dressed as monks, parades of Kindergardeners in sparrow costumes, and high schoolers doing Mexican hat dances and Spanish fandangos. Then there were the Historical Society people, the town dignitaries and the Mission Docents, most of whom managed to get themselves kitted out as Vaqueros, Spanish grandees and their ladies. I got the impression that anyone who was anyone in San Juan Capistrano was affiliated with those groups. And good for them. They’ve done a great job preserving and promoting the “Jewel of the Missions”.

Too bad they were seriously upstaged by the people who probably have the greatest claim to the Mission: the original local residents, the Acjachemen (pronounced Ah-ha-shay-mon) Indians.

Full disclosure here: I’m always on the side of the Indians. While I have a thing about visiting the Missions of California, I quickly bypass the dioramas and exhibits talking about how tough the old Padres had it. Instead, my first stop is always the Mission burial ground. Every one of them has a large mound that is the mass grave for the Mission Indians who were coerced, converted and sometimes even enslaved into building the Missions. They died by the thousands of hard work, disease and sometimes heartbreak. The size of the mound usually gives the best indication who really had it tough in those days. 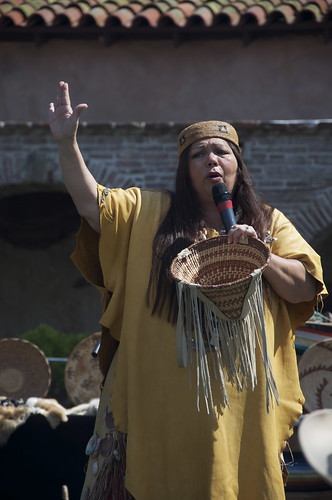 Jacque gets the crowd going with a traditional story.

That’s why I shoved my way through the monks, the sparrows and the grandees and headed directly for Jacque Tahunka-Nunez, who was leading a group of Acjachemen in full Native dress. Jacque’s website lists her as a master storyteller, teacher, singer, director, writer and cultural consultant. Let’s add to that electrifying personality, spiritual guide and inspirational speaker. At one point, Jacque took to the stage to tell traditional stories of Acjachemen life and spirituality. She managed to get several dozen kids from the audience on stage with her and organized them to chant, dance, do sign language and use Native American instruments in a respectful manner. The best part was the wonderful way she told a simple Acjachemen children’s tale but mixed in philosophy, codes of ethics and respect for the earth in such an organic way that the kids probably didn’t even know they were being “taught”. In fact, I can’t think of another storyteller who could pack that much meaning and depth into seemingly simple stories. Well, maybe that guy  in the robe who told parables. Okay, so I’m a big Jacque Nunez fan. (If there are any California teachers out there, book her quick. She travels to schools giving her presentations. And believe me, a half hour of Jacque is almost a semester’s worth of learnin’.) 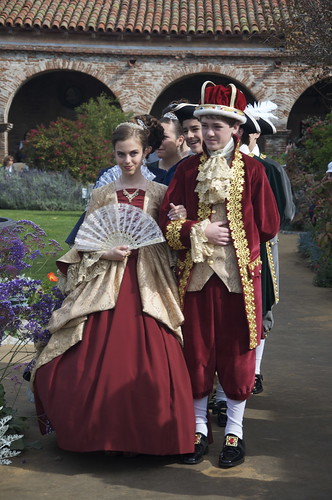 The Kings and Queens were cute, but totally upstaged by the Indians.

As I wandered around the huge Mission complex, no matter what was playing on the big stage, I kept running across the Acjachemen quietly injecting a note of spirituality and gravitas into the proceedings, something that was missing from the other scheduled events. One of the best moments was when Jacque and her group performed a sage burning and led the entire audience in saluting the East, North, West, South and then the Earth.

But I haven’t mentioned the birds yet, have I? Well, we were warned that the days of swarms of swallows overhead are long gone. As Capistrano has been built up, the fields and flowers that provided insect food are shrinking. In fact, our friend Juan at the gift shop told us of a Freeway overpass we should go to down by the creek where we’d see more swallows. 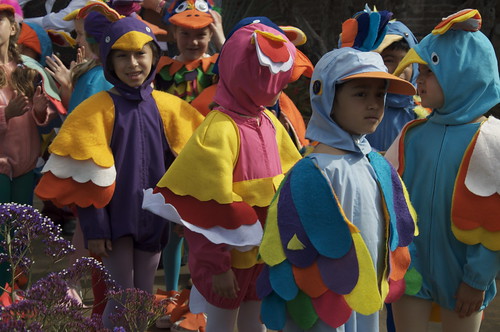 The swallows did return. They were a little more colorful than you thought.

So all during the morning, I scanned the skies, the walls and the palm trees for signs of swallows. I could hear them and every now and then I’d see one. But if you didn’t know this whole thing was about the swallows, you could easily forget about them.

With ONE notable exception. Every time the Acjachemen started chanting, swallows popped out and started flying around. How beautifully appropriate. Just like the Acjachemen were at one time, the swallows are being pushed, if not toward extinction, at least out of their traditional patterns. But don’t count the swallows out yet. 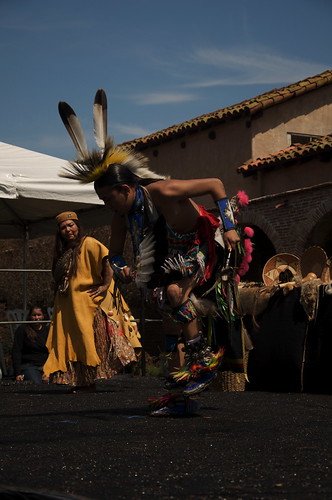 Jacque told a wonderful story about the discovery of a sacred Acjachemen relic at the Mission in the Seventies. The tribe was invited to celebrate the discovery. As part of the ceremony, they walked around and around the Mission courtyard chanting:

We are the people.

And we are still here.

Yes they are. I say Acjachemen and swallows unite. Keep the cute kids in swallow costumes, but let the Acjachemen run the St. Joseph Day festivities.

I did see more than the Native Americans. The Padres at Capistrano had a killer garden, one I’m going to copy. Although I still don’t think it will be fox-proof. They also made the first wine in North America at the Mission. You should see their crush pad!

I have hundreds of great pictures from the festivities here, but haven’t had time to label them. 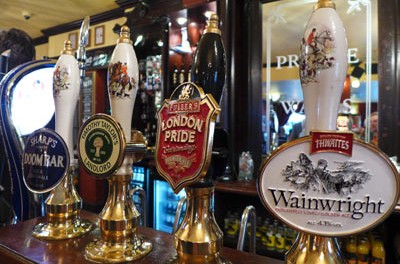 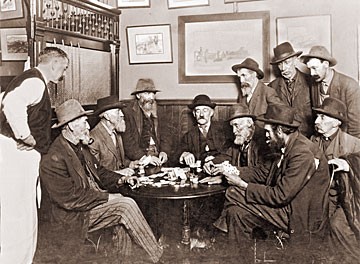