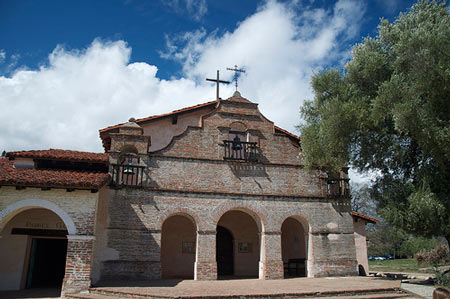 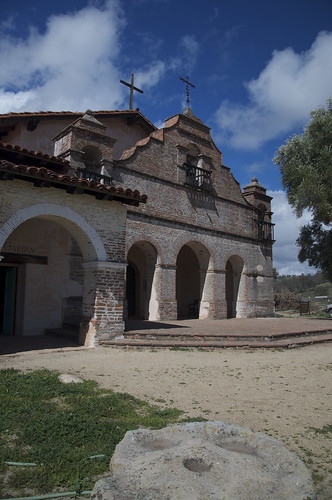 One of the highlights of the trip, the unscheduled stop at San Antonio de Padua, the one Mission that still looks much as it did in Padre days, thanks to its isolation.

Call me an unrepentant English Literature Major, but I always like to have a theme to my roadtrips. I strive for some contextual symmetry, a narrative line, a hero’s journey. Sometimes it works, sometimes it doesn’t. I’m not sure it did this time. But I always hope a trip sends me back home with a slightly different perspective. Or, at the least, exposure to something new. I do believe this trip accomplished that objective. But then, if you travel right, a trip always accomplishes that.

The germ that became this roadtrip started with a whim to see the swallows return to Mission San Juan Capistrano on the traditional St. Joseph’s festival day. Looking at the map, I noted, that on the way back, we’d be passing close to the Crystal Cathedral of televangelist Dr. Robert Schuller and Hour of Power fame. That gave the trip a vaguely religious flavor. Adding the Getty Museum to the itinerary fit right in, as you could say we’d be worshipping at the Altar of Art. At that point, I started calling the excursion, “The Get Religion Roadtrip” or the “Come to Jesus Tour”. Buck Owens’ Crystal Palace could be shoehorned into the theme if you look at Buck Owens as one of the founding Saints of Modern Country Music (and I do). But a stay at the Hotel Bel Air and the drive down through the Great Central Valley just didn’t really work into the program, although they were things we didn’t want to miss. The Nixon Library, which was a last minute addition, didn’t seem fit in anywhere. 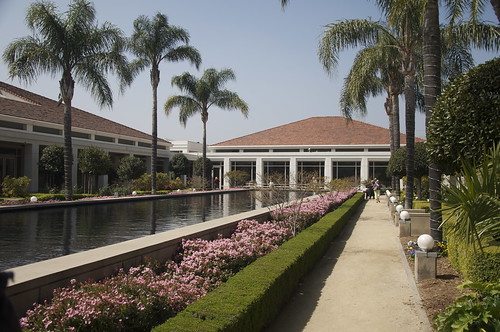 We had our perceptions of Richard Nixon realigned at the Birthplace and Museum. It’s heavy on the accomplishments, light on the scandals, but the man did preside over a lot of powerful history and did play an active role.

An unscheduled discovery, the beautiful Mission San Antonio de Padua, the most authentic of all the Missions in my book, tipped the balance toward the religious elements. But I’m still not sure this was really a themed trip. However, if we focus on what we learned or rediscovered, “JACKPOT”. Here are some of the highlights and our advice for anyone thinking of following our tire tracks: 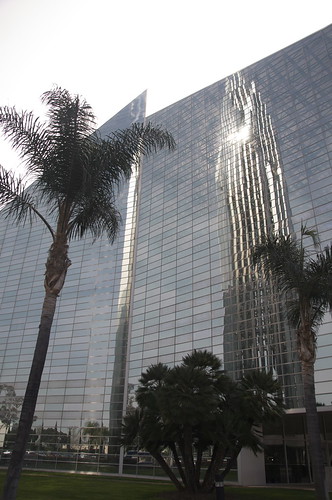 We tried to keep an open mind at Dr. Robert Schuller’s Crystal Cathedral.

*If you are in Northern California heading to Southern California, at least once, you have to take a route down through the Central Valley. Yes, I know the Coastal Route is spectacular and filled with sights, I’ve done it many times. (At least from Mendocino to the Hearst Castle and from LA down to San Diego. For some reason I always have missed the chunk between San Luis Obispo and LA.) But back to the Central Valley, it doesn’t have a wealth of what you’d call sights, but it’s something to see in and of itself: a massive agricultural bowl ringed with mountains that looks, when you are driving I-5, like you are in an ancient dried inland seabed. With the vast majority of our food coming from there, and the residents paying a high price for that bounty in terms of pollution and other byproducts of agribusiness, it’s almost something you have an obligation to see. Bonus: if you get off the freeway in any small town, it’s amazing how friendly and nice the residents are in a “Howdy Partner” Western kind of way. As an Eastern transplant, used to the steely-eyed suspicion of small town New England, I’m still amazed, more than 20 years later, at the frontier friendliness of the rural West.

*Do your research, but be open to having your mind changed. Or at least to looking at things in different ways. I included the Crystal Cathedral as an architectural point of interest. I wasn’t planning to comment on the politics and religion of Dr. Robert Schuller. However his appalling artwork did earn my censure and I quickly looked up his website to see if he was spending an equal amount on relief efforts and charities. Maybe he is. I couldn’t find any evidence and I was ready to condemn him for wasting money on self-aggrandizement. But I drew myself back and looked at him through the lens of history. Many of the great cathedrals of Europe were built and filled with priceless artwork as the villagers around them suffered grinding poverty. The builders believed that glorifying God was more important in the long run than handing out crusts of bread. Agree or disagree, Robert Schuller is following a tradition that dates from the end of the Dark Ages. We just left it at that. (Although we felt completely comfortable mocking his excruciatingly bad statues. At least the Medieval, Renaissance and Baroque eras gave us Chartres, Michelangelo and Caravaggio.) 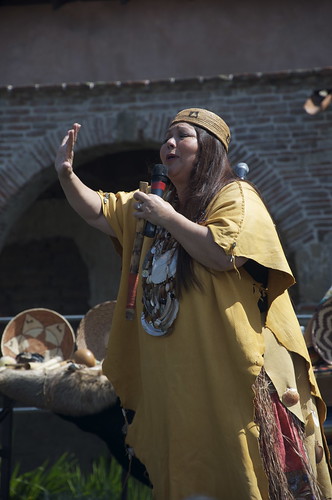 Storyteller/performer Jacque Nunez was a highlight at Capistrano. But in general, the Native side of the story at the Missions is always worth seeking out.

*See the Missions. See every one you can. They are all different. I have a vague goal to hit all of them and so far, I’ve counted down a pitiful seven out of the twenty one. Really sad when you consider that four that I haven’t seen — San Rafael, San Jose, Santa Clara and Santa Cruz — are right on my doorstep. The Missions, to me, are the best introduction to California history as Spain, Native Americans, Americans, Gold Rush immigrants and others all seemed to leave their marks on the Missions.

*LA Freeways are just as scary as you’ve heard. Don’t attempt them without a GPS. Ours helpfully told us which lane to get in for the inevitable point where your freeway merges and diverges into one or maybe three new freeways. We’d still be circling LA without our unit. Tune it to the British female voice (we call her Emily). Her calm and slightly snooty tone keeps you more centered than you would normally be in the situation.

*The Crystal Palace is definitely worth a trip from anywhere around LA, for the food, for the music and for the Buck Owens and other Country memorabilia. The Filet Mignon was one of the best I’ve ever had. The biscuits and Squaw Bread were fantastic. If you can’t hit a night with a headliner, Buck Owens’ son Buddy Allen and the remainder of the Buckaroos do a bang up job. 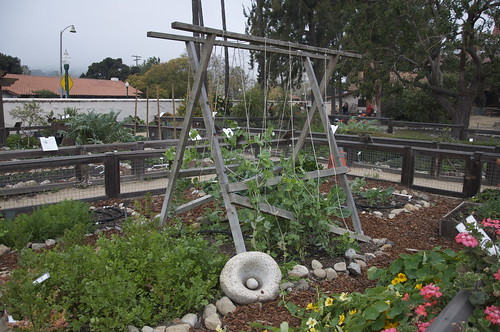 Unexpected bonus at Capistrano: completely recreated kitchen gardens of the Padres. I’m totally ripping this off for Sonoma.

*Talk to people. Some of the memorable characters who added to our understanding of the places we saw: the gentleman at the Frosty King Drive-In in Buttonwillow who took time out, when he saw our maps and guidebooks, to tell us about the history, geology and points of interest in the area. Juan at the Capistrano Trading Post (across from the Mission) who told us where we could REALLY see the swallows. (Under the I-5 overpass down by the creek.) Also Franki, an artist and docent who was a wealth of information about Mission San Antonio de Padua.

*Have a travel playlist. As I mentioned in this post, ours was full of Buck Owens (natch) and those influenced by him. As well as any songs that originated from or captured the spirit of The Central Valley, LA or Southern Coastal California. Get the music right and you’re in the right frame of mind to experience the place. 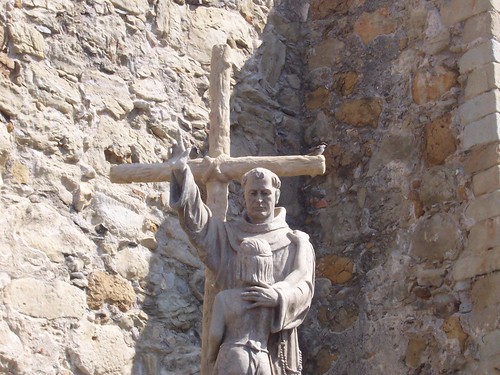 Even though the LA Times reporter who interviewed me wrote that the swallows didn’t return, they were there. And we certainly saw them all the way up the Central Valley. Here one of the little guys sits on the cross above Father Serra at Mission Capistrano. (Photo copyright MOM.)

*Pick a good traveling companion. One who’s attuned to experiencing the trip “between the sights”, one who is ready to take that unscheduled turn off and one who can roll with the punches when things don’t go according to plan. Mom filled the bill nicely. She was fascinated by the Central Valley scenery and indulged my desire to pull over to the side of I-5 and photograph every tumbleweed, oil derrick and orange grove. She encouraged the 22 mile detour to San Antonio de Padua which turned out to be the highlight of our trip even though it had to pre-empt the Steinbeck Center. And she’s still laughing over the horrible roach-infested motel we were originally booked into in San Clemente. (That adventure here.) There WAS that ugly scene over the chicken fried steak, but we’ll allow her one slip up.

The Big Moral? Just get out there. Go somewhere. Do a little research, but be prepared to find your preconceptions are wrong. Talk to people. Take detours. Expect and embrace the unexpected.

And get the music right.

NOTE: Here’s the link to the LA Times story where I’m interviewed as a Swallows Pilgrim. The reporter couldn’t find any swallows, but she obviously didn’t ask over at the gift shop, follow the Indians or drive back up the Central Valley. That’s where the swallows were.