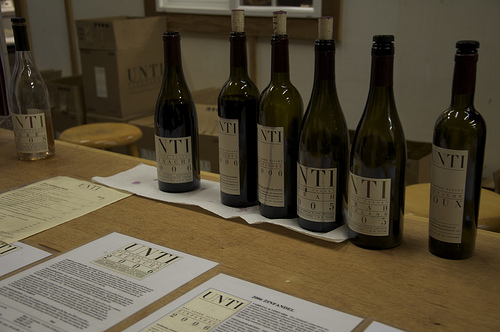 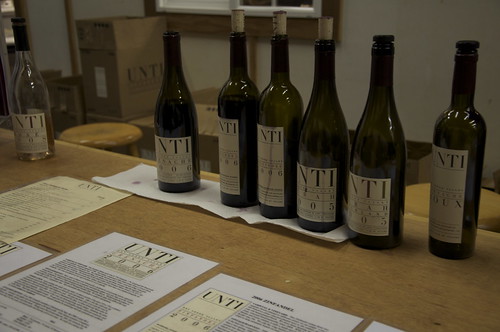 We’ve always had different criteria for wine tasting forays than your average bear. While most people coming to Sonoma and Napa gravitate to the large facilities with art and sculpture gardens, delis and gift shops, we’ve always sought out the little guys. It was much easier 20 years ago when we first arrived. Back then, I can remember traveling down an unmarked dirt road, standing around hopefully by a barn or shed until a farmer (who would turn out to be the owner) drove up on a tractor, jumped off and asked, “Do you want a tasting? Well c’mon in the kitchen.” And that was to taste at Caymus Vineyards whose wines by that time had already been featured at White House state dinners!

Things have changed mightily in Napa. For one, Caymus is now only open by appointment and most of its wines sell for around $100 a bottle. But the farmer-vintner still lives in most of Sonoma which is aggressively proud of its agricultural nature and has the manure-caked cowboy boots to prove it. So when we discovered Unti wines, we hoped their winery would be OUR kind. First of all because they were making a number of Rhone style varietals, which we aspire to produce. Secondly because they are the featured wines at two of our favorite neighborhood restaurants: Firefly in San Francisco and The Girl & The Fig in Sonoma town (which boldly serves ONLY Rhone and Rhone style wines.) And third, they’re doing it all organically and biodynamically. 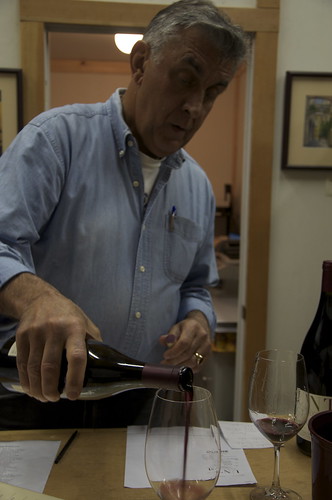 George Unti kept up a steady stream of sardonic commentary, all without missing a pour. Our kind of winemaker.

So today we packed up and headed north to Sonoma’s Dry Creek Valley to visit Unti Vineyards. It would be an understatement to say we were NOT disappointed. The tasting room is a modest building off to the side of the family dwelling, next to a crush pad and processing shed not too much larger than ours and smack dab in the middle of the vineyards. Even better, as we walked in, the pourers in the tasting room were dad George Unti, Mick Unti and their winemaker, Sébastien Pochan. There were about four other tasters there, but I was sure Andy could clear them out in under ten minutes. 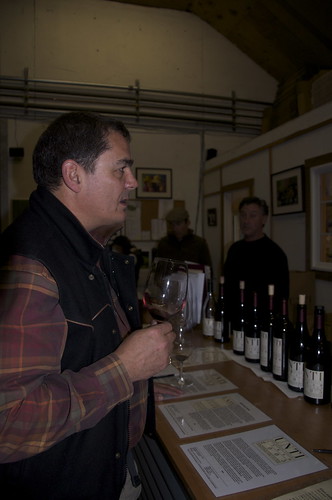 Andy asked enough nerdy questions that it took two Untis and the winemaker, Sebastian, to answer them.

Have you ever been on a tour and there is always that one person who asks the nerdiest, most archane questions and wants detailed answers, even as every other person on the tour is rolling their eyes and nudging each other? Well, on wine tours, Andy is THAT person. And here he had the full spectrum of people to answer all his questions: the farmer, the marketing person and the winemaker.

However Dad George Unti answered all Andy’s questions — often with a sardonic twist of his own — while he kept the varietals pouring for everyone in the room (no mean trick!) For instance, when Andy attempted to question him about why he didn’t have any Viognier (a white wine) blended with his Rhone styles as the French do, George answered that you don’t need Viognier if you have the soil and weather to get your Grenache ripened properly. Whew! A jab at the French all while pouring a superb Grenache/Mourvedre/Syrah blend and not spilling a drop.

Meanwhile Son Mick was a wealth of information on the differences or similarities between French, Spanish and American strains of the same grape stock. The drive up there was worth it for the point alone where he put our mind at ease about the Mourvedre we’d planted for the not very scientific reason that it was one of the Rhone blending grapes. The vineyard manager who put in our vines assured us that it would grow in our soil, but there’s a big difference between growing and growing into a spectacular wine grape. Silly us. We didn’t know enough at the time to question and investigate this. Then a local wine-maker told us Mourvedre here never tastes as it does in France. Andy had been moping around thinking we had a whole section of the vineyard planted with the wrong stock. However, that nay-saying winemaker is a Zinfandel Man. Mick Unti told us “Nonsense”. French and American Mourvedre is a lot closer in taste than many other grapes varietals, such as Pinot Noir. So, we’re looking forward to our Mourvedre with renewed enthusiasm. Besides, at Two Terrier Vineyards, we’ve got to love a varietal that the French sometimes call estrangle chien (“the dog strangler”). I’m assuming that’s because of its big bold flavor. (We’ll be sure not to let Lucy and Oscar drink any of it.) 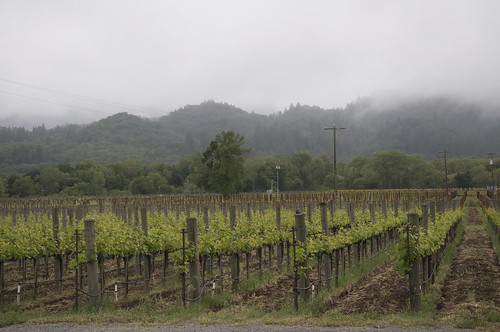 Andy asked so many winemaking questions, we didn't have a chance to question them on their biodynamic growing practices. Well, if they'll have us, we'll be back.

We left Unti with a mixed case of their excellent wine including a Grenache/Mourvedre Rosé with a surprisingly light color. We also had the benefit of George Unti’s detailed description of how they use a process for this wine called saignée or the “bleeding” of  juice from the tank immediately after crushing for minimal skin contact. Look for that technique to be attempted at Two Terrier Vineyards this Fall! Also benefiting from the saignée technique was a wonderful blend of 65% Grenache, 25% Syrah, 10% Mourvedre they call Couvee Foudre. But in this case the draining is used to intensify what is left for a big, bold flavorful Red. 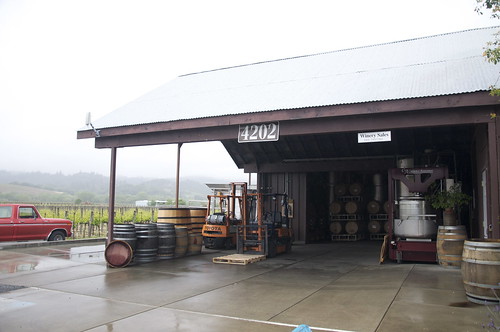 We were pleased to see the production they were getting from a crush pad not too many times larger than ours.

If you are in the neighborhood of Dry Creek Valley, I heartily recommend visiting Unti Vineyards. Tastings are by appointment only (as I suspect George, Mick and Sebastian have many other things to do besides pour wine and answer nerdy questions.) So call first at (707) 433-5590.

Meanwhile, you might want to sign up for their emailed newsletter. It’s not always about wine. In fact, they warn that their opinions, like their wine, are always unfiltered. Good read. Good people. Good wine.