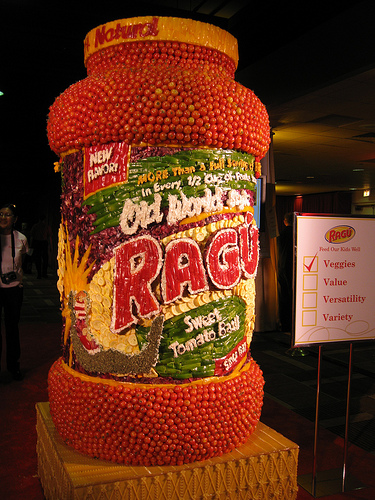 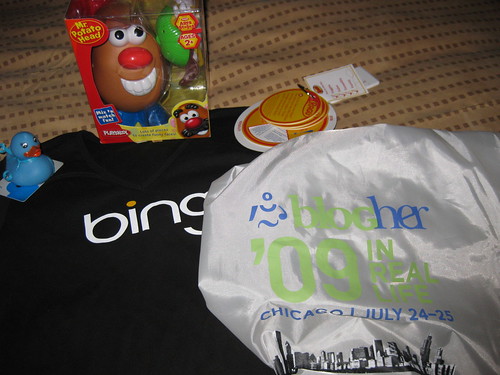 The BlogHer ’09 Conference has been so jam-packed I’ve barely been able to Twitter, let alone blog. But before we get started, let me first reassure you that it hasn’t been because I was one of the tiara and boa wearing girls passing out drunk in the lobby after way too many cocktails.

I met up with a fellow Mount Holyoke College alum last night who is a former Chicago Tribune editor. We were at a downtown Italian sidewalk cafe having just maybe one glass of Chianti too many and solving All World Problems. Although we must have bumped into each other in college, we really became acquainted on Facebook recently. It was astonishing to discover that Cassandra is the smartest person in the world. Why? Because she and I both have the same answers to All World Problems. Over Lake Huron whitefish and fava beans, we tackled racism in America, the education crisis, the media shakeout between print and web-based sources, journalistic ethics, Obama’s cabinet picks, the financial crisis and so much more. We shut that cafe down and by 12:30 were back at the Hotel still needing to finish formulating the solution for health care. So we stopped for a nightcap at the hotel bar. That’s when the tiara and boa wearing BlogHer party girls came screaming in. It’s a shame. The Riot Grrrrrrls were so loud and distracting, we never did put the final touches on the Healthcare Solution. Obama will be so disappointed. Blame it on BlogHer. 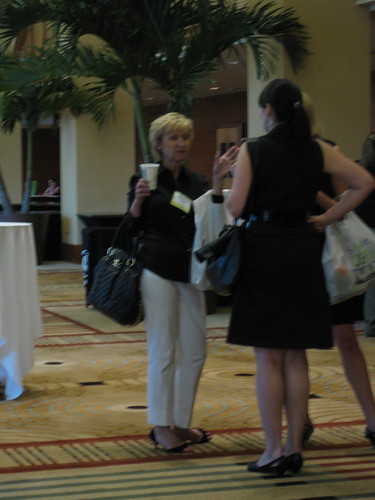 This is as close to Tina Brown as I could get. 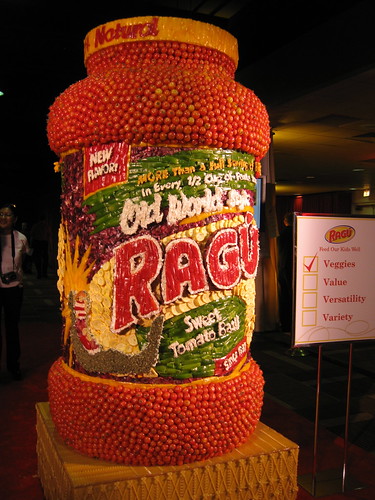 I was hiding behind the giant Ragu vegetable sculpture at the time.

Not to say that I’m an old grump who begrudges Gen Y the chance to turn BlogHer into one big Cosmo party. The way BlogHer is evolving, it seems you can have the kind of conference you want. They really upped the tech quotient with lots of intimate, hands-on sessions on special coding topics such as SEO, hacks, CMS, etc. Although there seem to be ever more Mommy Bloggers, you can avoid those sessions if you aren’t interested. In fact, the BlogHer organizers did a great job of really tracking things out, so you could mostly stick to your interests. They further tracked things by offering Birds of a Feather lunches so Travel Bloggers had a table, LGBT Bloggers had their table, Political Bloggers had their table. 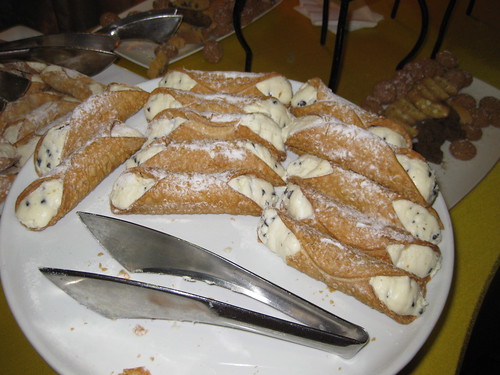 At the surprisingly good meals, you could take the Cannoli. (I left it.) 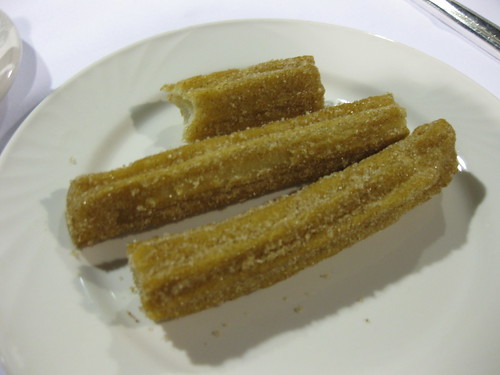 I took three churros. Wanna make something of it?

The problem is: I didn’t fit at any table. Where was the table for the bloggers who cover things like composting, winemaking, and terriers with occasional forays into political rants, pictures of coyote poo and musings on crap British TV programs. Worse yet (at least as far as me getting a seat at the Kewl Table), blogging seems to have grown up. Everyone was networking like mad, looking to monetize, aggregate and leverage. When the inevitable question was asked: “What do you blog about?” their eyes were glazing over before I could even get past “Well, it’s like Green Acres”. Clearly I was not A CONTACT. You could see the mental “NEXT”. Amazing that just last year, it seemed there were only two kinds of blogs, the Mommy Blogger or the wild and crazy category-defying conglomerate of opinion and rants (and the more disparate the better). Now everyone is focusing down, building a platform, seeking to own a niche market. I was a lot more popular last year. 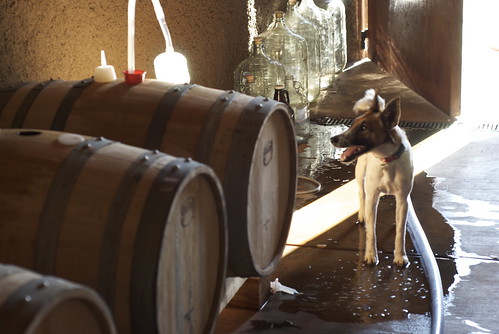 Where was the BlogHer track for bloggers who write about wine-making and terrier-wrangling? And coyote poo and eccentric British husbands and friends. And political rants and vampires and roadtrips.

Now I realize I should have worked on the Elevator Pitch instead of just laughing about it. This was really punched home when I found myself forced to participate in a role-playing exercise  in my first session. Before I could say, “I came to sit quietly in the back of the room”, I was paired off with twelve other bloggers to “own my expertise”. And I had to go first. I hate going first. It always makes you look like the dumb one.

Moderator: Quick finish this sentence: I’m an expert in [blank] because I have [blank] credentials and [add validating facts].

Me: I am an expert in hilarious clueless city to country transitions because three years ago I started a biodynamic winery and farm and I’ve made and learned from every mistake that can be made along the way. As a consequence, I now have a huge Albanian readership and I’m the number one result when you Google “horse cowboy sex”.

Clearly, I was wasting valuable space and time for people who were there to MONETIZE, AGGREGATE AND LEVERAGE.

Wait? Was I just complaining about the Party Hardy Crowd and now I’m griping about the bloggers who were too focused? There’s just no pleasing some people. I decided to just drop back, lose the agenda and wander around seeing what looked interesting. That seemed to work, and once again, I have to say that the information you get out of BlogHer is well worth the price of admission. 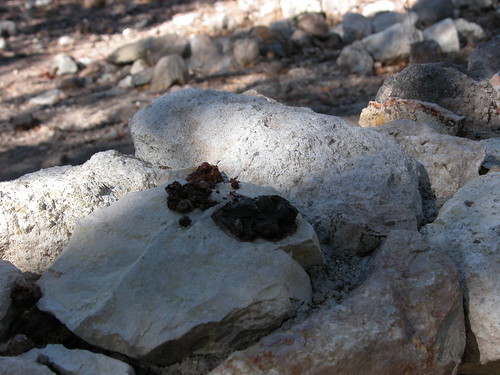 Is there another blogger out there who posts as many pictures of coyote poo? Talk about “owning your niche”.

But enough about my BlogHer experience. You really came here to see if I realized my BlogHer goal of becoming BFFs with Tina Brown and The Pioneer Woman. Tina Brown, not so much. I saw her in the lobby having a very animated conversation but got all shy and bashful. The best I could do was hide behind the giant Ragu Vegetable Sculpture and take a quick point and shoot picture. But her keynote discussion with Ilene Chaiken of The L Word and Donna Byrd of The Root was fascinating, provacative and crisply British. (When asked how she resists oversaturating The Daily Beast with celebrity pictures and news, even though such things raise stats, she replied: “It’s often the boys on the staff who want more celeb pictures. We girls just have to get very cross with them and get politics back on priority.”) Anyone older than me who feels comfortable calling herself a “girl” and can talk about an editorial decision as “being cross”, well, Tina, all is forgiven.

Now to The Pioneer Woman. Remember that redhead I saw get off the elevator the first day. It must have been her because she seems to be staying on my floor. Imagine my surprise, as I rushed to the elevator from my room after a midmorning break, and The Pioneer Woman comes up behind me to get on as well.

So of course I said: “Are you The Pioneer Woman?”

It was clear she hadn’t gotten the memo or had just skipped that blog post where I explained that we are just like Twins except I didn’t marry a cowboy and run over one of my dogs like she did.

I said: “I have a blog like yours. Sort of a Green Acres thing about clueless city people trying to become farmer/ranchers. Except our livestock are terriers. And it’s not really a ranch. It’s a vineyard.”

Now I have to note that Pioneer Woman isn’t the folksy cowboy boot wearing Western gal you might think. She’s soft-spoken and polite and sort of surprisingly Supermodel willowy. And she was very good at hiding what must have been alarm at being stuck in an elevator car with someone who might be a crazed stalker. One with terriers.

So she very sweetly said: “Oh, what’s your blog?”

That’s when I shamelessly pressed one of my cards into her hand.

And I can talk about this encounter because I’m sure she’s never going to show up here. In fact, at this point, she’s probably trying to find out how to block my IP address from all subsections of her site. And alerting the police in her neck of Oklahoma to be on the alert if a woman who looks like she might be a San Franciscan shows up with terriers.

But it could have all been so different. If I’d only worked on that Elevator Pitch like the BlogHer people told me I should. And if I’d brought up my impressive Albanian readership. And the top Google Search thing.

You know, I bet if I’d told her Donny Osmond liked this post so much he put it on the home page of his fansite, she would have been really impressed. 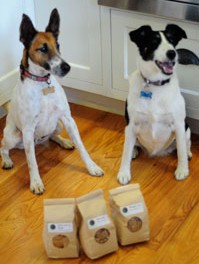 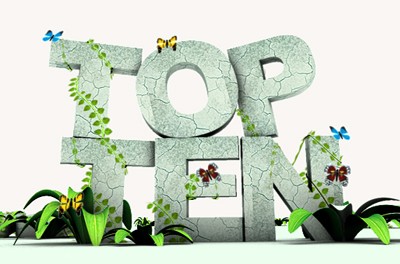 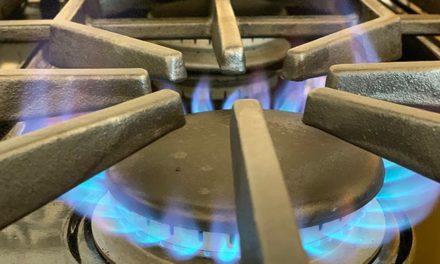