It was a food themed day today in ways we hadn’t imagined when we decided, on a whim, to run up to Santa Rosa to the Sonoma County Fair. Andy was on a mission to see goats and cows. I was more interested in burros and chickens. The Sonoma County Fair is a wonderful fair in the great old tradition, with pie and quilt making competitions, fresh scrubbed 4-Hers and their animals and good old country fun. Being Sonoma, there is a huge emphasis on locally grown, sustainable practices and organic produce and meat. So while the tradition of a fair would seem to indicate a need for fried dough and cotton candy, I had a turkey sausage from free-range, sustainably raised Willie Bird Farms just down the road. I shared it with Andy, was still hungry and went off for a Polish dog with saurkraut and cheese. But Andy, the sausage-eating, vegetable-hating Englishman, became so self-righteously health conscious, he spoiled the whole experience for me and I ended up dumping half of it and all the chips into the trash bin. As it turns out, the way the day ended, I would be glad I jettisoned it.

Meanwhile, it was time for the cattle judging for the Future Farmers of America, so we rushed over to the exhibition ring. Where I was able to gather further evidence for a special theory of mine which is being proven over several years of county fair going. That theory is that, certainly when it comes to the 4-H and Future Farmers of America, the best looking kids in the ring also have the best looking livestock.

May I Present Exhibit A 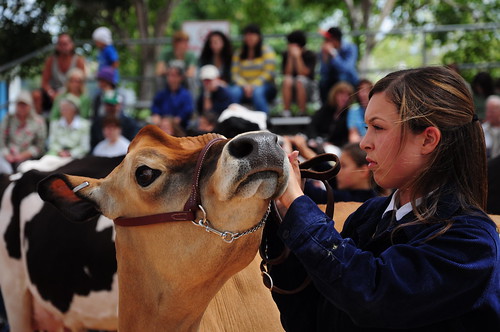 This cutie and her Jersey both had every right to look this haughty. They each knew they were the best looking things in the ring and they were struttin’ their stuff. Good for them! 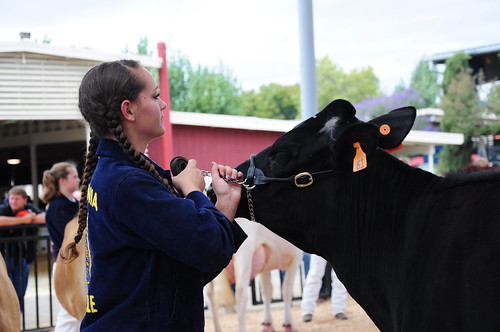 And how about this tall willowy braided beauty right out of a Diego Rivera mural? Her Black Angus was just as glossy and lovely. 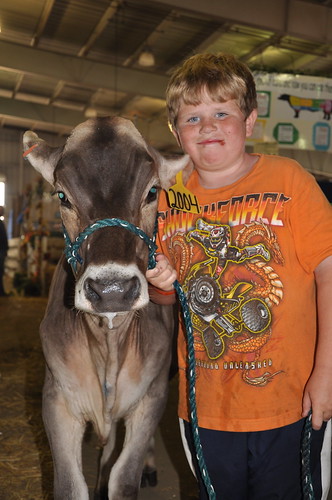 This tow-headed charmer was just as cute as his calf (even with cotton candy smears on his face.)

Is it livestock raising or is it participation in 4-H or Future Farmers that makes kids this nice and cute? How could anyone not draw the same conclusions? Apparently they don’t always. The announcer at the cattle judging was going on and on about how FFA and 4-H were under attack and “certain groups” were trying to force them out of the school system and off school property for some of their meetings. He was urging parents and concerned citizens to petition for support of these wonderful clubs. Now who could that villainous “certain group” be? No names were mentioned, but I’m guessing their initials are PETA. Sure these animals eventually get sold for meat, but if you could see how these kids care for, groom and pamper these animals, you’d be proud to eat a burger from one. 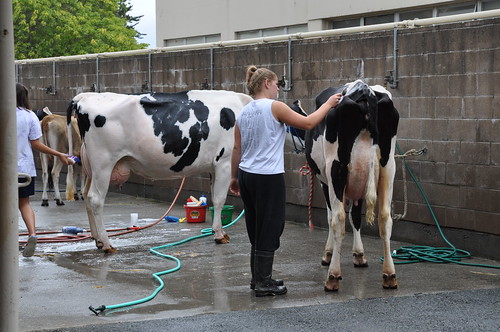 For instance, is your meat as clean as these cattle going through the “cow wash”?

Ever seen pigs this clean? 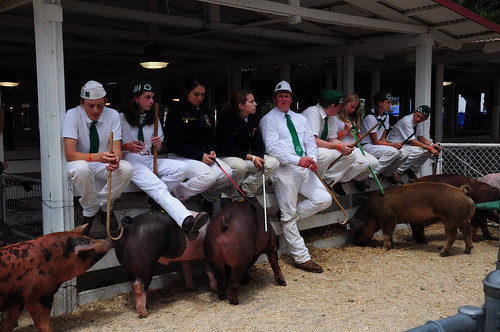 These are not fast food employees. The 4-H uniform is all white with the trademark green 4-H scarf or tie. 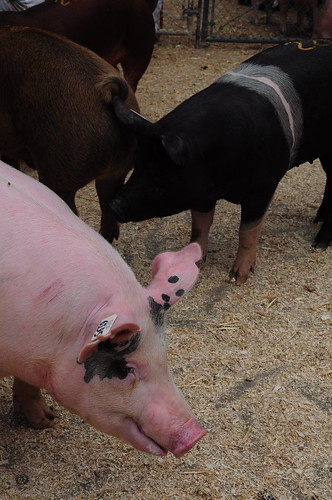 I’m telling you, these are some CLEAN pigs.

The clean pig thing came back to me in a big way during the second part of our day when we decided to catch the showing of Food, Inc. which was playing down at the Sebastiani Theater on the Plaza back in Sonoma. If you are someone who happens to eat, you must see this documentary which rips the ugly veil off the evils of big agribusiness. It would take a whole other post to review it or even just chronicle some of my reactions to it. You’ll be treated to horrendous hidden camera video of feedlots and heart-rending stories of small farmers sued out of business by Monstanto and other agribusiness giants for daring to do things like save seeds, plant organically or even just criticize these conglomerates for their practices. In fact, so intent is Monsanto and the other three or four conglomerates that control most of America’s food chain on quelling any dissent that they’ve got small farmers living in fear. Oh, you can criticize them if you are like Oprah and you want to spend several years and $1 million dollars to WIN your case. But even a mother who lost her son to E-Coli poisoning from a meat processor who had numerous violations before the one that killed her child, was hedging all her statements to the film-makers. She’s trying to push through Kevin’s Law, named for her son, which calls for strengthened food safety laws and regulatory punishment for those who violate them. She was happy to talk about the facts of the case, because it’s on record, but when the director asked her how she had changed her eating habits in response to her son’s death, she was afraid to answer the question. Seems even expressing a personal opinion such as “here’s how I eat and here’s why” filled her with such fear that Agribusiness would sue her for every penny, that she deferred the answer to her lawyer. 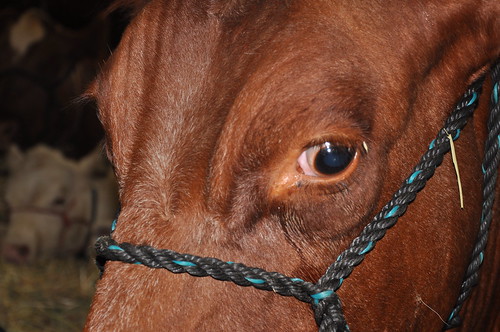 Even as a part-time farmer in the epicenter of the organic, sustainable farming world, I found Food Inc. an eye-opening documentary.

Okay, gotta save the rest of the Food, Inc review for another post. But just remember these things:

*Don’t eat anything with soybeans in it. Most are GMO and nearly all are owned by Monsanto which is intent on crushing small farmer dissent.

*Clarence Thomas is scum. He was a lawyer for Monsanto. Then ruled from the bench to support big agribusiness against the rights of consumers to know what’s in their food.

*People talk about NAFTA as if it hurt America at the expense of Mexico. But one after-effect of it was to allow cheap, government subsidized U.S. corn to flood Mexican markets. That, in turn, put over a million small Mexican corn farmers out of business. Large meat processing plants (which are all tied in with the corn industry) then started bussing these disenfranchised farmers up North to be cheap, poorly treated expendable labor in the most dangerous workplaces in America — their slaughterhouses.

*You can vote on where your food comes from — three times a day. Choose local, choose organic, choose sustainably farmed. It works. Consumer pressure has caused Wal*Mart, of all places, to stop stocking any milk treated with rBST growth hormone. And to start aggressively stocking organics, which their food buyers are saying are the next best thing.

Still, before I scare you off from this movie, it is ultimately uplifting and there are people who are fighting and winning. An unlikely hero of the film is an eccentric and enthusiastic organic farmer who heads the Shenandoah Valley’s Polyface Farms. Seeing him walking around his fields with his naturally grazing cattle and pigs, it struck me. His animals were as clean and glossy as the buffed, shampooed and blow-dried animals at the Sonoma County Fair. So maybe this is what happens when 4-Hers and Future Farmers of America grow up. You get farmers who respect the land, the animals, the consumer and have animals so clean, you’d probably sit down at the table and share a meal with them. That is if they weren’t the meal. But you understand what I’m saying. 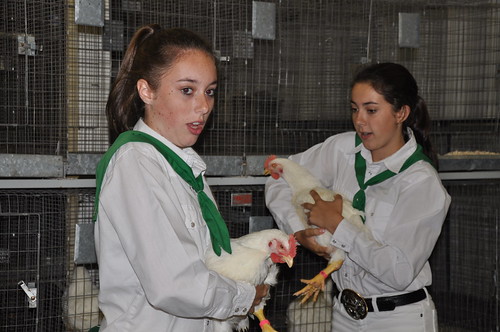 After all, who wouldn’t want to eat chicken raised by fresh-faced, well-scrubbed farmers like these? 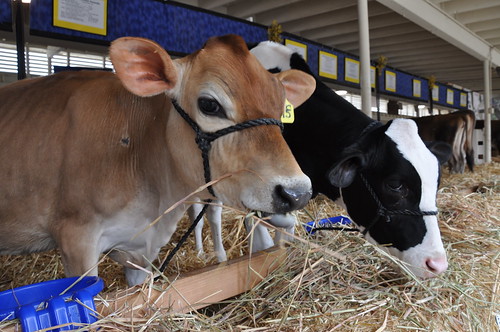 Or get burgers and milk from pretty, well-cared for cows like these? 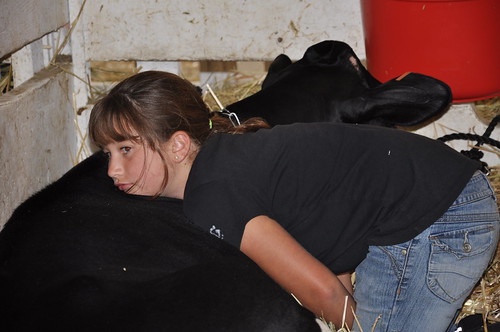 Or any food from farmers who love their animals as much as this? 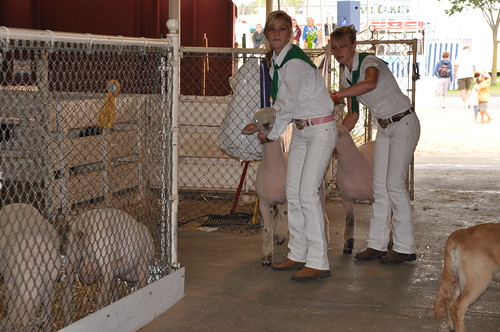 In fact, I think my pictures are proving my theory: the best food comes from the best looking farmers.

So after Food, Inc. I really, really, really regretted that half-eaten Polish dog. Especially when I found out I could have had great food at the area of the fair called The Mexican Village. 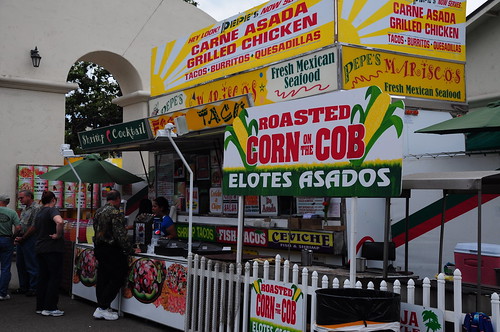 I could have had ceviche or fresh roasted corn on the cob! 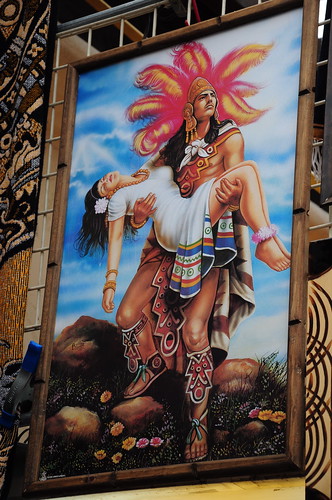 And picked up some great artwork. 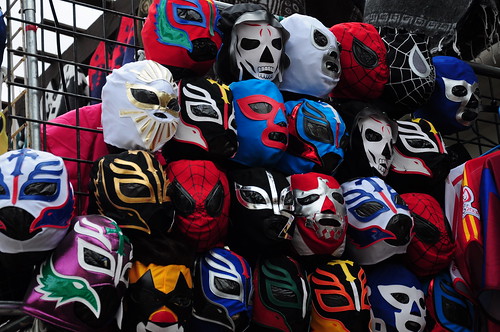 But that also is a whole other post. Find all my pictures of the fair here. 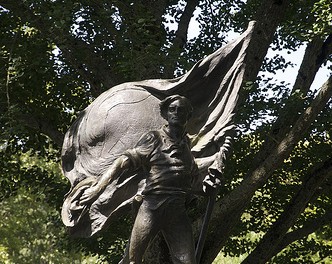 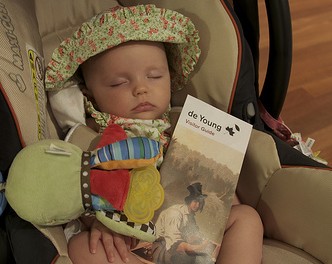