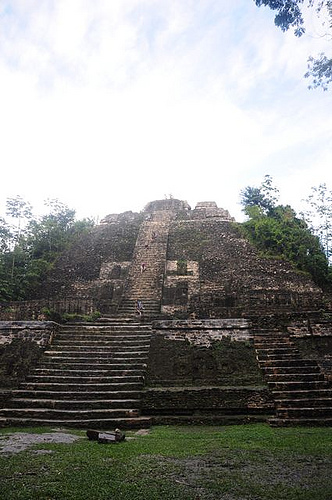 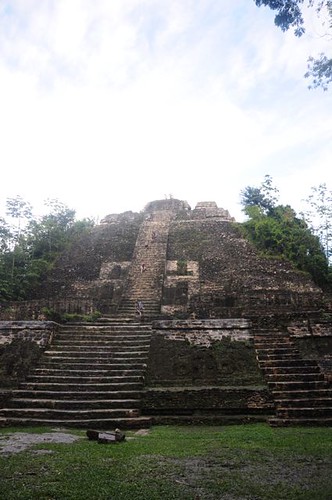 I’m not someone who can lie around a beach for too long. After a few days, I need to get out and explore the country. I’m a veteran of a few Belizean jungle trips. They are never exactly easy or comfortable, but you can’t leave the country without doing it. So I signed myself up with Searious Adventures for a day trip to the Mayan ruins at Lamanai, notable as the only Mayan city state that was still in operation when the Spanish showed up, probably due to its strategic location on a navigable freshwater river. Of course, the Spanish immediately built a church here, which the Maya burned, then forcing the padres to watch a mock Eucharist using corn tortillas, after which they roughed them up and sent them packing. Disease later devastated even these Maya, the British chased out the remaining groups in order to clear for sugar cane and Lamanai was taken over by jungle. That’s largely how you’ll see it now. Unlike Tikal, which has been extensively cleared and gives you a good idea how a Maya city originally looked, Lamanai is mostly overgrown. You travel from excavated building to building through narrow jungle paths. Suddenly, you come out to a clearing and a temple. Since this is not the well traveled site that Tikal is, we were the only visitors save for a group of archeologists working on some of the giant stone heads. It was a dreamy, somewhat eery Indiana Jones sort of experience. We even had a surprise appearance by the elusive and endangered Gibnut, a terrier sized guinea pig. 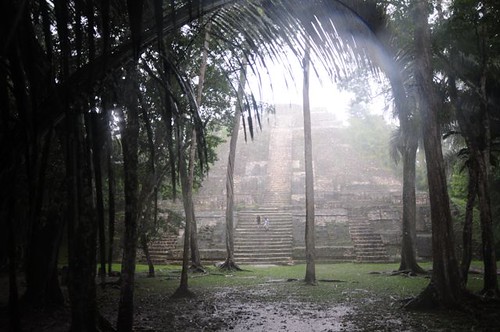 At overgrown Lamanai, you travel through narrow jungle passages between temples. We didn’t even know it was pouring until we came out from under the canopy. 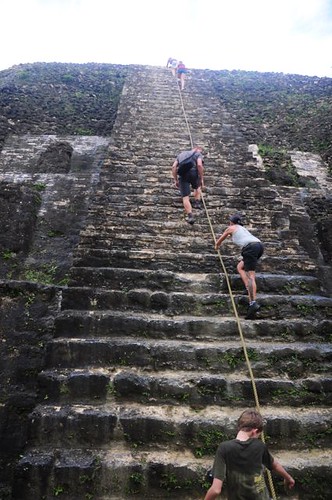 Braver souls than me climbed all the way to the top. A heavy camera bag and slick wet steps made me stop at halfway. 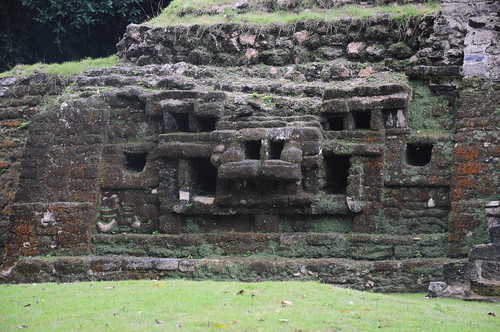 But getting there is half the adventure and takes you through the full spectrum of Belize topography and society — at least if you start from one of the Cayes. It helps to have a great tour operation. And we did. We started with two cute and personable Creoles, Andre and Wayne. The boat trip over to the mainland, Andre assured us, would be “Sixty Belize Minutes”, which I guess meant those sixty minutes would be stretched to however long we wanted it to be. We made it in about that time, even though Andre made sure to take us by every site of interest including Caye Caulker, which served as a boat yard from pirate times, but now is largely a reserve, to a privately-owned caye that boasts an airstrip and a full golf course. Their commentary included not just historical information, but often colorful descriptions of Belizean life (perhaps making this not a tour for young children.) 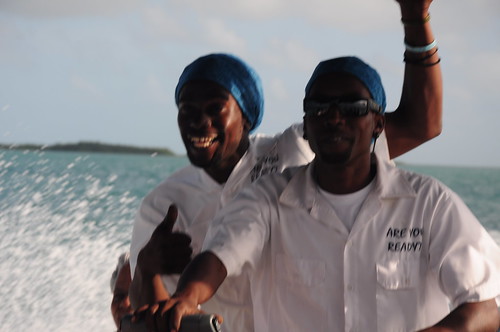 Wayne and Andre kept up a running and hilarious commentary for the whole trip. Loved their matching do-rags.

We entered the Belize River which is just north of the country’s biggest population center, Belize City. You’d never know it. Less than a half mile up the river, we were cruising through jungle and mangrove swamps, without a building, person or floating styrofoam container in sight. (In fact, unlike most of the Caribbean, Belize is remarkably clean and litter free. The Belizeans take great pride, and derive a lot of income from Eco-tourism, so they actively protect their environment.) 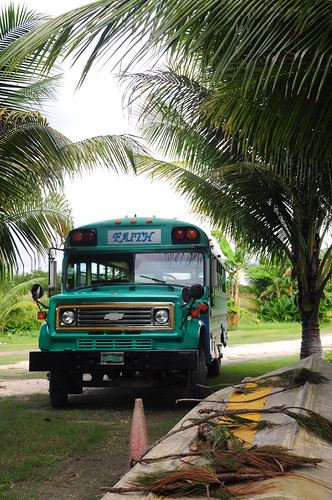 We traveled up the sugar cane highway Belizean style.

The next stage of the journey was a switch to a bus for a ride up the New Highway, which largely serves as a conduit for the sugar cane traffic. The part of the group that was going cave tubing and zip lining got into air conditioned minivans. Those of us heading for our Mayan adventure took more traditional transportation.

Far upcountry in sugar cane country, we switched to a small river skiff at The New River which is actually the ancient waterway the Maya used. Eddie, our pilot, is a part Maya mestizo who knew all the birds of Belize and could seemingly spot them from a hundred yards. We pulled up close to dozens of birds, iguanas, and even a troop of playful monkeys. 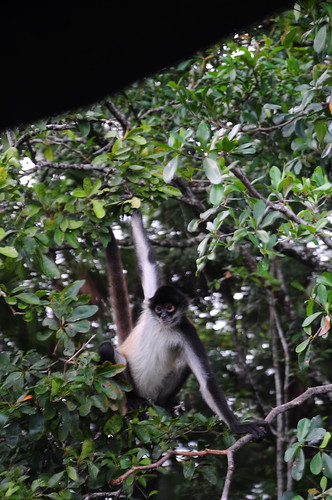 The boldest of a troop of monkeys we saw swinging from the trees. 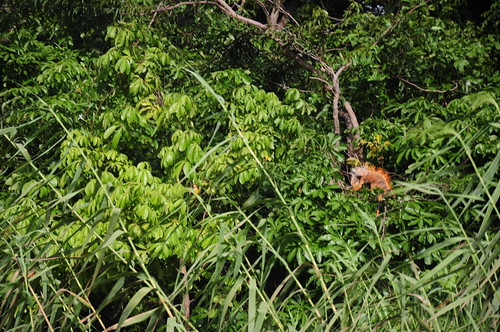 It’s iguana mating season when the males, like this one, turn bright red. The smaller green females are considered good eating and are called “bamboo chicken”.

As a veteran of several of these kinds of jungle trips, I have to warn that they aren’t always comfortable. But perhaps that’s half the charm of them. We had a few bucketing rain storms that lasted for a few minutes, then cleared. This became even more of a Belizean experience when the Bimini top on the boat snapped in the wind. This could have been a nightmare with a whiny group. But in the face of Wayne and Eddie’s enthusiasm, everyone got into the spirit of the thing. Besides, we really got a sense of what it was like to be a Maya paddling up the jungle river to Lamanai. 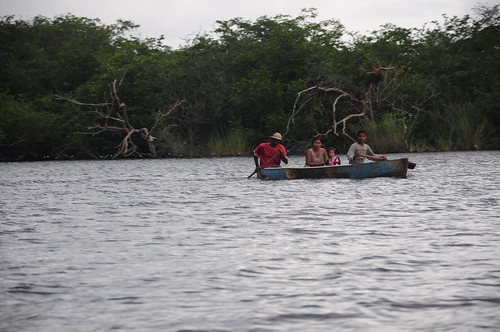 Every Belizean will remind you that the Maya never left. About 11% of Belizeans are full blooded Maya, many living traditionally. 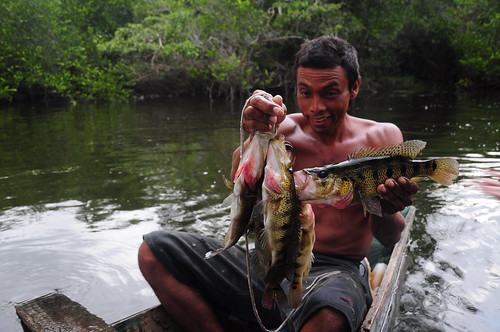 A Mayan fisherman shows us his catch which he got using just a string and a piece of bait.

The long journey back could have been boring, but was another kind of experience with Wayne mixing excellent (and very strong) rum punches on the boat and the bus. All while teaching us Criol phrases and keeping up a running commentary on Belize, local customs, politics and his love life — every sentence punctuated with “ya Mon”. Back at the Belize River, we joined the other group and Andre took the wheel, setting what must have been a new record for the Belize City to Ambergris run.

So all in all, a jungle and ruins trip is highly recommended, even if you are on a beach vacation. It’s probably not for the kids. You might want to take them to Altun Ha which is a closer shorter tour. But to really get a Mayan experience, you couldn’t do better than the excellent Searious Adventures. Did I mention the food? A Belizean breakfast and lunch are included and were some of the best meals I’ve had this vacation. But then again, Wayne was pouring those rum punches. Ya Mon!

More pictures of the trip here. However, they aren’t my best. Between bouncing around in boats and buses and shielding my camera from intermittent showers, I only took quick snaps. 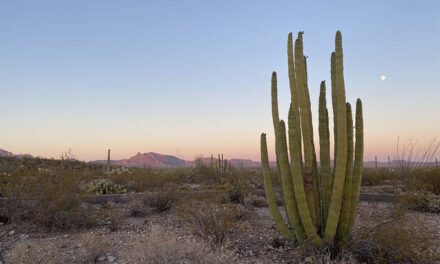 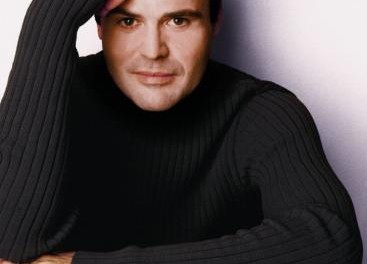 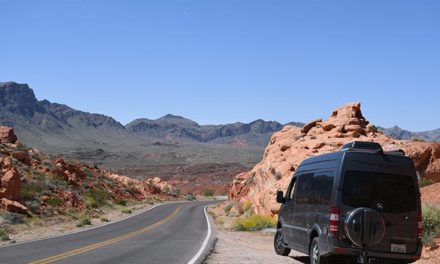 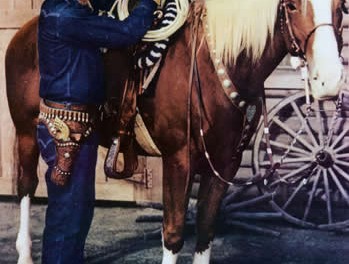