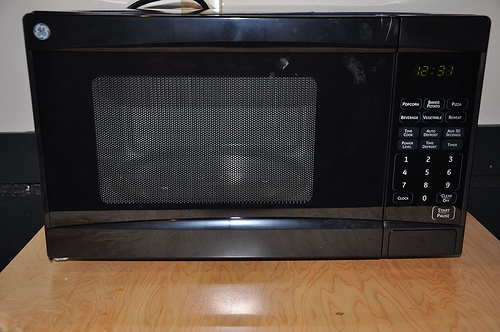 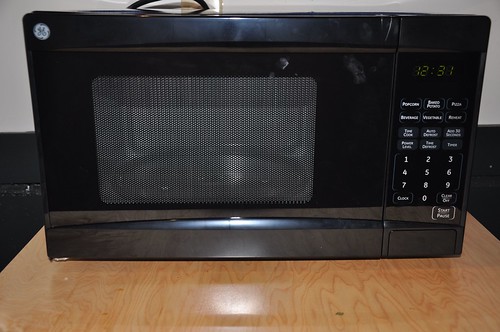 You might have caught the news about one of the world’s most ancient languages which just became extinct when the last native speaker died at 85. What went unreported was another event of at least the same cultural significance. Namely, the last household in the economically developed world without a microwave just succumbed. That would be my house. After decades of resisting one of the more evil forces of Westernization, I’ve purchased a microwave. It took the threat of imminent starvation to do it.

My problem with the microwave is not that I’m technology-averse. I’m an early adopter of all Apple products and I’m the Mechanical Gadget Queen: GPS devices, heart rate monitors, any number of MP3 players. I love ’em all. My problem with the microwave, and my position against buying one lo these many years, is that they are essentially useless technology. By that, I mean that a microwave can’t do anything that another device can’t do better. Except the few things that it can do which are really not particularly needed.

Want to make a great meal fast? The pressure cooker can make a from-scratch meal just as fast and make it three times better. Microwaves seem to alter the texture of foods. And not for the better. By contrast, the pressure cooker infuses everything it cooks with concentrated flavor. My verdict: the ecological niche of “fast cooking” is more than adequately filled. No need for a microwave. 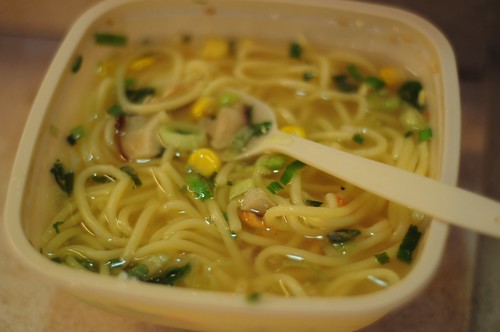 Microwave noodle meals. If they served this in Abu Graib, human rights groups would be screaming.

“But”, say the microwave groupies, “you can’t warm up last night’s left overs as well in a pressure cooker.” My retort, how about the barest minimum of preplanning. Is it really so onerous to turn on the stove or the toaster oven and warm something up? Especially when conventional cookers don’t change the food texture and, as a bonus, give you that nice brown crustiness on, say, a cheese topped meal? 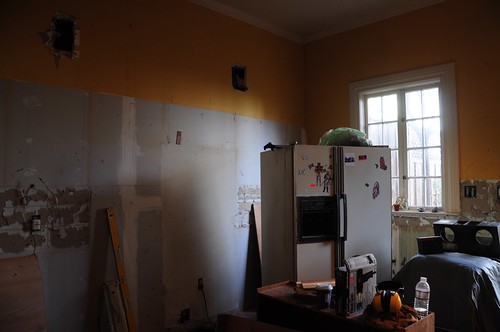 This is the disaster area that is now my kitchen. Except the large appliances have been trucked off to various charities.

And really, how much do you want to build your diet around “warming up leftovers”? It seems to me, the things microwave fans point to as “better warmed up in the microwave”, like spaghetti, are things that should never be served as leftovers in the first place. Do you think any self-respecting Italian is eating warmed up spaghetti? I think they cook the pasta they plan to serve ten minutes before they serve it. Maybe I have too much time on my hands, but when something as fast and easy as pasta is too much to squeeze into my schedule, well, time to think about better time management. Oh, and boiling water? The British would have two words for you: Atomic Teapot. Faster than a microwave, thank you.

Then our current kitchen remodel left us with no refrigerator, sink, stove or dishwasher. Andy warned me that we’d have to get a microwave. Especially since now the only area with a sink, counter and refrigerator is the mini-bar in our bedroom. Somehow, the idea of cookery in the bedroom, including washing dishes there and trucking the garbage down the stairs, has not been appealing. Nope, the kind of cookery you want to do in these situations involves grabbing something shelf-stable, that can be eaten in what it’s cooked in — preferably something that can be chucked in the garbage immediately after consumption. Hello Microwave. 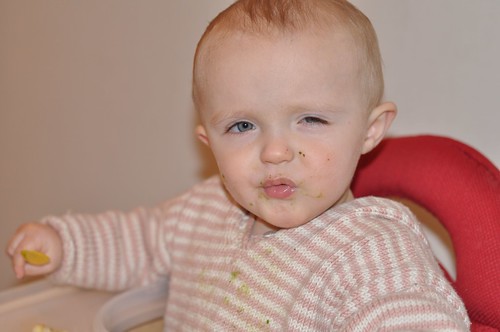 My Goddaughter demonstrates the face I make when eating microwaved foods. Come to think of it, commercial baby food is pretty shelf-stable. Hmmm.

Still, I didn’t go without a fight. But one week of subsisting on yogurt, fruit, trail mix and Whole Foods’ salad bar had me desperate for alternatives. I cadged a meal from friends, but with weeks more of kitchen remodel ahead of me, I’m not sure how much I can count on that option.

So now I have a microwave. I got a black one to reflect its Satanic properties. I haven’t gotten much beyond oatmeal. Which is as unevenly heated as I expected. And Annie Chun microwave soups meals. Which are as horrible and faux food as I knew they would be. I may microwave a sweet potato. I’m sure the texture will be strangely mealy and not as beautifully caramelized as if it were cooked in a proper oven. I probably won’t get beyond that. I can’t bear to. And when this remodel is done, some shelter in San Francisco may be recipient of an only slightly used microwave. 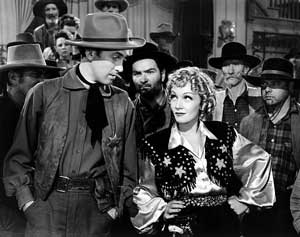