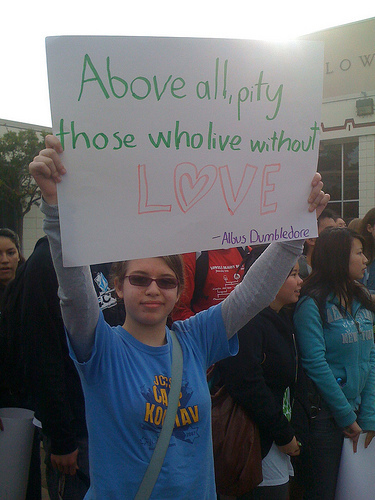 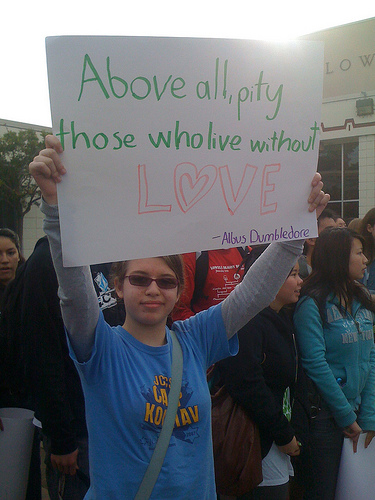 I’m only a part time San Francisco resident these days. But I’ve still — as Tony Bennett would say — left my heart there. Lately the far Right  likes to demonize all things San Francisco, as if this isn’t one of the most beautiful, special places in America. You want to find the best in “American Values” — those values of tolerance and freedom so many of us only pay lip service to — you’ll find them here. Here’s a shining example:

A few weeks ago, the infamous Fred Phelps of Kansas’ Westboro Baptist Church decided to target Bay Area schools to protest their stated policies of tolerance to religions, sexual orientation and other *sneer* Liberal Values. Phelps, you’ll remember, is the minister who thinks being a Christian is about showing up at the funeral for a dead US Marine and screaming “Thank God for Dead Soldiers” at the grieving family as they lay their son to rest. (Phelps contends that God is killing our soldiers because we tolerate Gays, or some such twisted thing.)

Apparently two schools at two ends of the Bay Area were targeted by Reverend Phelps for his brand of “Christian Love”. He was incensed, among other things, at the schools stated policies of tolerance. Phelps especially wanted to spew his invective on Jews and Gays.

In both areas, a community decision was made to give as little publicity to the event as possible, which is probably why you haven’t heard about it and these videos are just now available. But the kids in both schools felt such hatred couldn’t go remarked upon. Instead of meeting hatred with hatred, the kids of Gunn High School in Palo Alto organized a sing-in where they organized peacefully to sing Spirituals, old protest songs, and wear T-shirts with slogans of acceptance. They were joined by teachers and parents who were equally non-violent, in a show of support for all people who would be targeted by Phelps’ hate:

Up in San Francisco, perhaps inspired by a certain group’s love of old Hollywood musicals, the students at Lowell High School, staged a “Dance Away Hate”. Again, parents and teachers showed up in full support:

Folks, that’s how we do it in San Francisco and the Bay Area. We may not all be Christians, but this, my friends, is how Christian Love is done. Tea Baggers are welcomed to take notice. 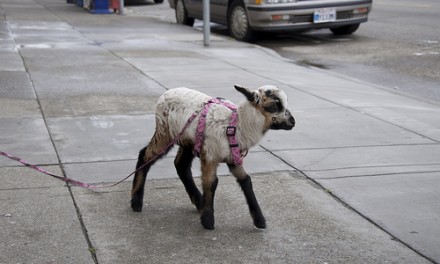 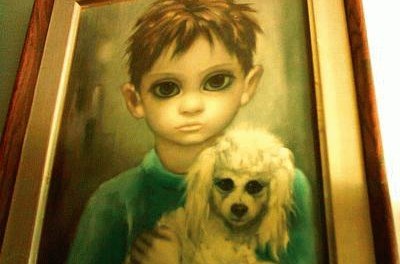