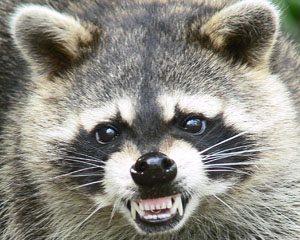 People ask me if I’m ever afraid living part time in Sonoma surrounded by wildlife. “Ha!”, I say, “the dangerous animals are in the City!” Yes, we had another raccoon stand-off. Yes, it again involved Oscar, our youngest terrier. And this time it took Andy, our carpenter friend Dino, San Francisco Animal Control, and assorted power tools to bring everyone safely home.

Our backyard in San Francisco is completely covered with decking and butted up to our neighbors’ fencing and houses. Which means that anything that manages to get into the crawl space under the decking — oh, say raccoons, skunks, terriers –is completely inaccessible to the anxious owners and annoyed neighbors above. We can only pace overhead and listen to the snarls, barks, and scary scuffling sounds. After the last time Oscar chased a raccoon under the decking, we brought in a team of carpenters to completely seal off all access — at least from our side — for anything larger than a city mouse.

Apparently, we forgot that hundreds of years of genetic selection have gone into the breeding of a Smooth Fox Terrier — breeding that predisposes them to wriggle through the tiniest opening after furry critters, corner them and never back down until one of them has lost most of his blood volume. In the past, if a Smooth Fox Terrier even hesitated when the fox was biting his face off, well, that’s a dog that didn’t get bred for the hunt. Very impressive in a fox hunt or a war zone. Not so good for a pet in the city. 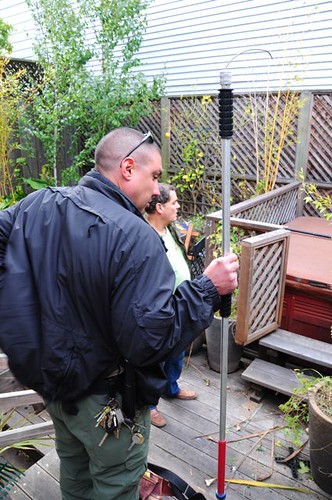 Animal Control didn't contribute much but this Critter Extraction Lasso. It was enough.

So back to that sealed off decking. For a terrier, no big deal. Here’s what took about 5 seconds: dog let out into the backyard, dog starts high-pitched yapping, owner realizes an animal is under the decking, dog rips out part of the wooden barrier with his teeth and dives into the crawlspace under the deck. The snarls and terrier shrieks were truly terrifying, so we wasted no time bringing out the big ammo.

Andy started trying to pry up planks. I called our carpenter friend Dino who has the truly impressive power tools and a call was made to Animal Control. You ever get up close and personal with a raccoon? These ain’t no sweet little Disney characters. A good sized raccoon could rip your face off. Unfortunately our Animal Control Officer was keenly aware of this fact. When he arrived, at about the time we’d pulled down half the fence and realized there were actually two raccoons under the deck, he just handed his critter lasso to Dino. It was clear his policy was: “Hey lady, they just don’t pay me enough.” 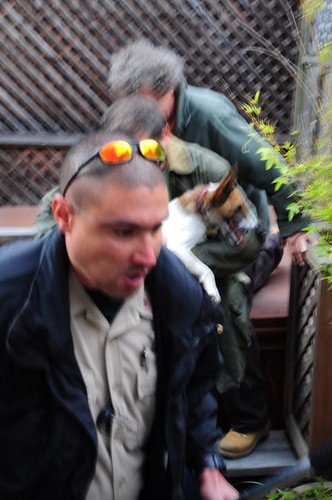 We're all pretty shaky after the Great Dog Extraction. (Can you see how relieved the Animal Control Officer is that he didn't have to fight raccoons?)

Long story short, dog extracted, humans beat a hasty retreat back indoors leaving raccoons (we hope) to go away on their own. Dog inspected and found to be intact with no bites. All repair to our downstairs bar. Much vodka needed and consumed. Dog comes off his adrenalin high and crashes into deep sleep.

Next project: we’re sealing up that deck like Fort Knox. Maybe with two by fours. Maybe with sheet metal. I’m still not betting against the terrier breaking through should another set of varmints show up. 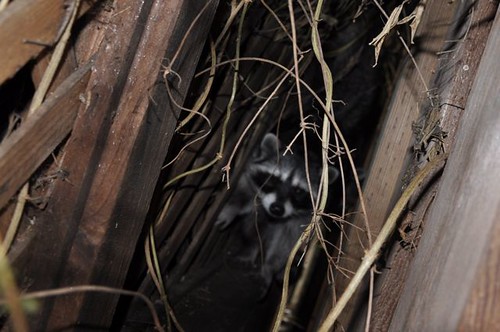 We leave those scary raccoons alone to find their own way out of our destroyed fence. 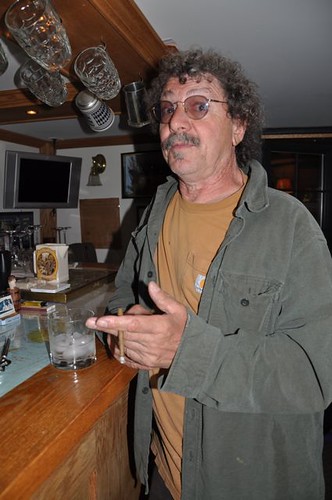 And repair to the bar for a much-needed vodka. (Shown Carpenter Dino who handled the actual Terrier Extraction.) 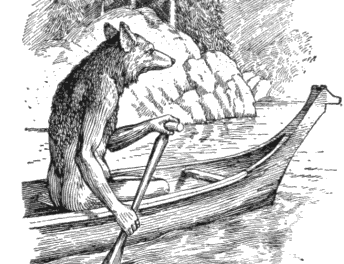