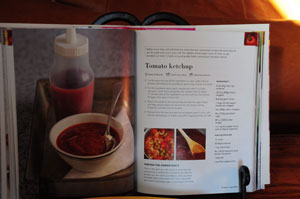 I’ve been meaning to make home-made ketchup ever since it became obvious that I was going to have a bumper crop of tomatoes. That resolution became stronger when I realized I’d been the victim of a tomato bait and switch and my tomatoes, though prolific, were going to be very uninteresting eaten raw. For this adventure, I started with a British cookbook, Jellies, Jams & Chutneys by Thane Prince. First of all, I think you have to go with the British when you are talking about ketchup. They are absolutely mad for ketchup. They’ll put it on anything. That may be because so much British food is tasteless otherwise. But that doesn’t account for the British friend I have who puts ketchup on his pizza. In any case, the British are closely tied to ketchup which started as a Chinese concoction of pickled fish and spices called ke-tsiap. It migrated to the Malay peninsula, where the British got hold of it. At some point in the late 1800s, Americans added in the tomato base and the rest was history. Reviewing a couple of recipes, I liked the more exotic blend of spices offered in the British cookbook. Besides I had a Brit to please, so the British version was it.

First step was finding 6.5 pounds of tomatoes. Not a problem, even after I gave a huge bag of them to John and Louis. 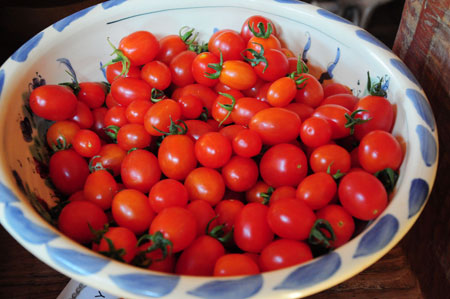 I got almost all I needed off my plants. There are bushels more still on the vine ripening! 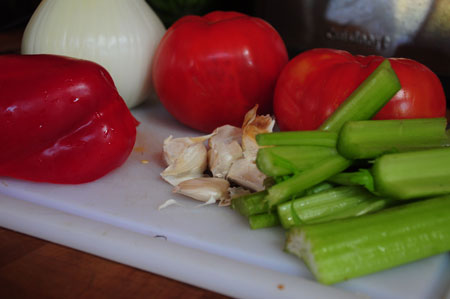 Here’s where I should have questioned the recipe more closely. What kind of tomatoes? The book didn’t specify, but I assume you’d want something meaty and pulpy instead of watery. And the recipe just said to put the ingredients in a large pot and “cook for about 15 minutes until very soft.” Well, how soft? And it’s going to take a lot more than 15 minutes to get everything softened up enough for the next step which was passing the mixture through a fine sieve or food mill. Luckily, I had the presence of mind to chop everything up finely in the food processor before I put it in the pot. And it took a heck of a lot longer to get this boiled down to where it appeared to have any possibility of eventually being thick enough to be ketchup. 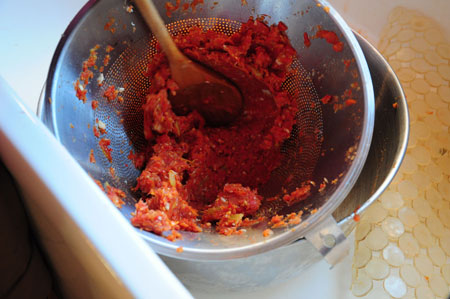 So passing it through the sieve gets out the seeds and the skins. But it takes a strong hand and you really have to press. 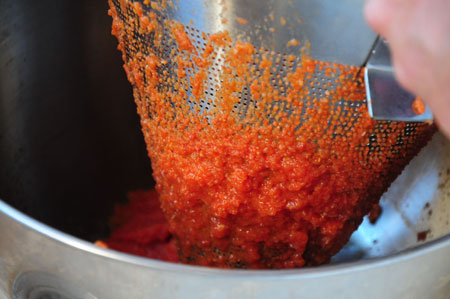 I’m assuming you’d want a lot of this pulp for ketchup making. My tomatoes didn’t have much. That left a very watery liquid, like tomato water.

At this point, the recipe asked me to “return the purée to the pot, add 8 oz. of sugar, 8 oz of cider vinegar and the spice mix. Then simmer for 20 minutes until the mixture thickens.” Here’s the problem, there was no way 20 minutes would see any thickening. And I hadn’t even started with anything that approached a purée. If I were rewriting this recipe, I’d specify a meaty tomato and I’d recommend really liquefying all the ingredients BEFORE putting them in the pot.

But then there is the spice mixture, and that’s really why I’d chosen the recipe. Some recipes didn’t call for anything more exotic than celery seed. Even worse, some relied on sugar, corn syrup and tons of salt. Take a look at what Thane Prince asks for: 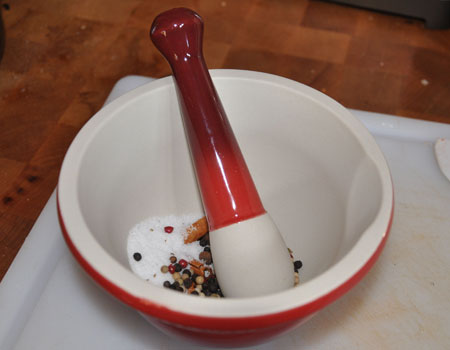 I ground it up to a powder with a mortar and pestle.

The minute I started grinding the spices, I knew this would be the deciding factor. The other was the vinegar I used. 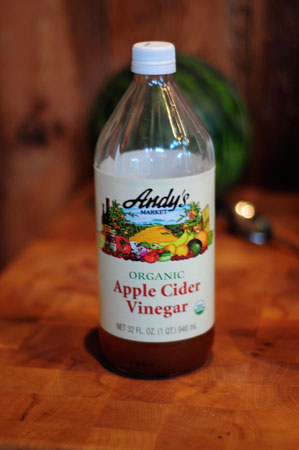 If you are up Sebastapol way, you must stop at Andy’s Market for this most excellent Apple Cider Vinegar. Organic and made from local apples.

The last differential would be using muscovado sugar instead of white sugar. It was a substitution recommended by Prince and added a smokier, deeper flavor rather than a cloying sweetness.

So I can’t tell you how long I boiled this, but considerably longer than the recipe said. 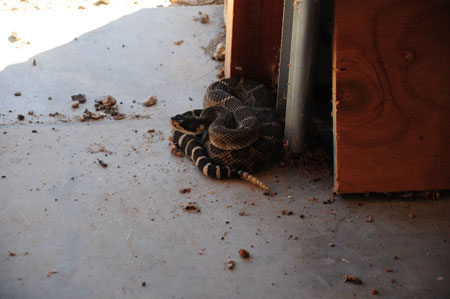 Especially since I had to leave my ketchup making to help Andy chase a 2-1/2 foot rattler out of the garage! But pay no attention to that serpent. He has nothing to do with ketchup.

I just kept a light boil until it thickened up and looked a bit ketchupy. At this point, Andy was panicking and said I had to take it off the stove, even though I thought it could have stood some more thickening. 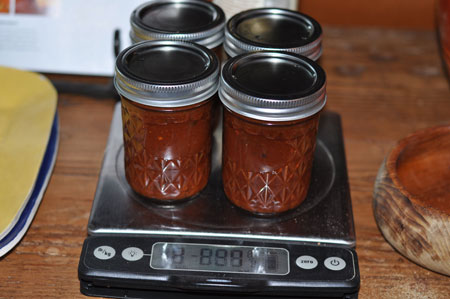 I ended up getting 2 lbs. of ketchup when the recipe said it should yield 5 lbs! 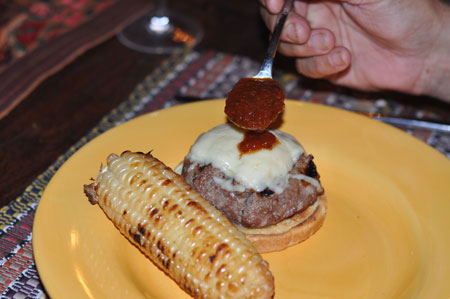 The taste test came on homemade burgers from local beef served with our own corn. MMM. It was smokey, spicy and delicious. 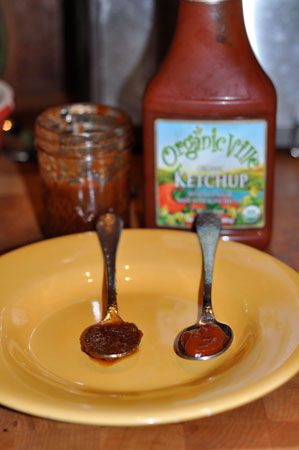 Then I had Andy taste test it against a local organic brand.

Andy declared mine the winner, saying it was more like a complexly spiced chutney than a ketchup. But then he’d have to say mine was better, wouldn’t he? I’ll have to make this again, get a higher yield and broaden my tasting panel to include more Brits. 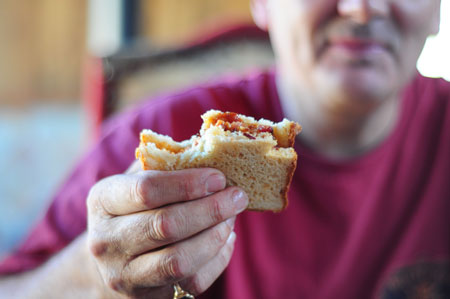 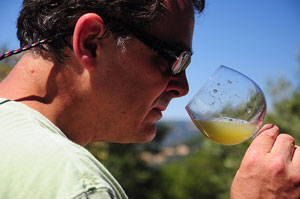