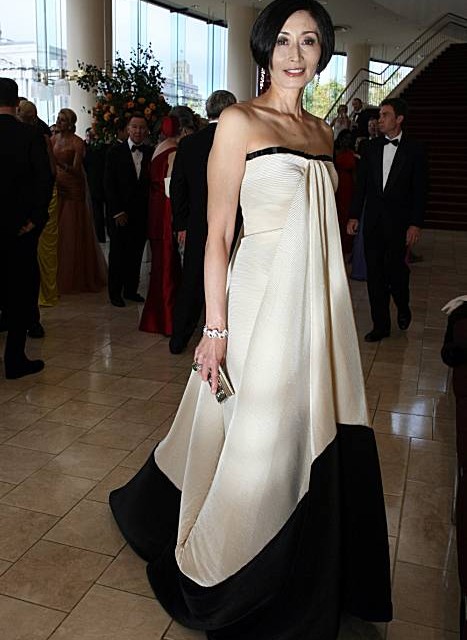 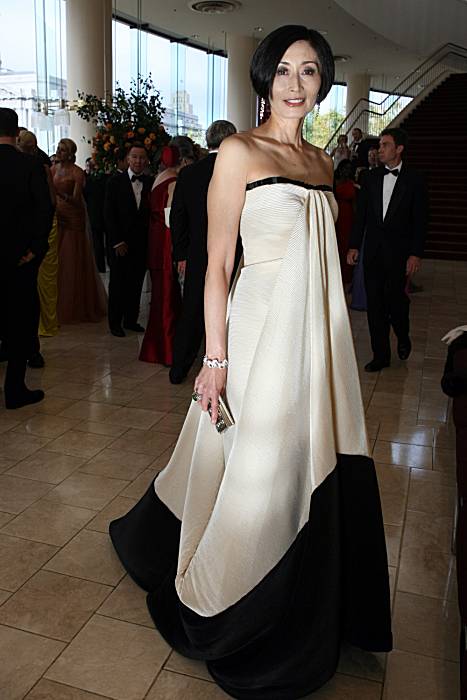 Photo by Erin Lubin, Special to The San Francisco Chronicle

Okay, actually that never happened. I was elevated beyond the buffet line and invited to the sit-down Patrons dinner where I dined with Nancy Pelosi (more on her later), Mayor Gavin Newsome and former Mayor and Speaker of the House Willie Brown. Okay, you caught me again. They weren’t exactly at my table, but we were in the same tent.

So, yes, back to the beginning. We were invited by a friend at KPMG whose company is a major sponsor of the San Francisco Symphony. Which meant we got to do the whole Magilla, from the Promenade where the Ladies Who Lunch display their designer gowns, to the Gala Patrons Dinner where everyone who is anyone in San Francisco has a seat. Not that we are anyone. As was made abundantly clear with the first hurdle of the evening — walking the red carpet (which was actually teal) past the phalanx of press and paparazzi into Davies Symphony Hall for the Promenade. I’ve done the gown thing before for the Opera, and this time I opted for comfort. Besides, I’d just come down from planting autumn crops in Sonoma and needed to spend most of my prep time washing dirt from under my fingernails. There was no time to fuss with a gown and hair. So simple cocktail dress, kitten heels and a pashmina. Andy, of course, was the style in this duo with a tuxedo adorned with a scarlet ascot. It must have been the ascot that got at least two photographers to lift their cameras as we walked up. But they each took a look at me and instantly put them down. The strappy heels were showing off my farmer’s tan from my Tevas. Clearly my picture was not worth the pixels.

Not that I expected to get my picture in the social pages. We were there for the people watching — and what a sight it was. You’ve never seen so much Botox, so much dermabrasion and so many face-lifts in one place since Joan Rivers did her last one-woman show (bada boom). What surprised me was that women, who clearly had the resources to spend that much on their faces, would neglect the rest of their bodies. After watching three dozen women whose faces looked roughly my age but were on bodies that looked to be my mother’s age, it struck me what the problem was. These are women who tanned deeply at Saint Tropez or Cannes every year of their youth, so, although most were in their sixties, the skin on their bodies was the equivalent of an 80-year-old, while their faces had been manipulated back to about 49 and holding. The fact that most of them felt the need to sport gowns with plunging necklines and backs wasn’t helping matters. 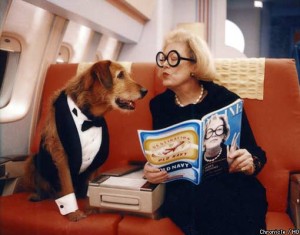 Best style at the Gala: the 80 and 90 year olds who were rockin' Mr. Magoo glasses and comfortable shoes. They were working that Carrie Donovan look.

Then there were the actual 80-year-olds and they, by contrast, were FABULOUS. Remember the style maven Carrie Donovan with the big glasses who, coincidentally, used to intone “FABULOUS!” in those Old Navy commericals? Well, her sisters in shades were at the Gala in force. These were great older women wearing comfortable heels, age-appropriate gowns with stylish jacket tops, and sporting HUGE Mr. Magoo glasses. The look said, “F*ck it. I’m old but I want to see everything, have a good time and not get bunions. Now hand me a glass of champagne or get out of my way.” They were truly the best dressed and were clearly having the last laugh.

Now to Nancy Pelosi, who I saw really up-close and personal at the dinner tent. (Sorry Nancy for bumping into you as you glided to your table.) I have to say, this is a woman who should sue every news photographer who has ever taken her picture. She is absolutely radiant, a fact that none of her photographs seems to bring out. If she’s had facelifts, as many snipers want to claim, I saw no evidence of it. (And again, I was close enough to spill her champagne. Again, sorry Nancy.) In fact, she has luminous, lovely skin, very sexy laugh lines around her eyes, and a lovely smile. I think she’s a woman who was once told “When someone is photographing you, open your eyes REALLY, REALLY wide and give the biggest smile possible.” Nancy, bad advice. Next time a photographer shows up, give them your Symphony Dinner Tent smile. The one you reserve for constituents who jostle your champagne glass but are graciously forgiven. Trust me on this.

Did I forget to mention that there was music? I don’t need to say more than Jessye Norman, Duke Ellington, San Francisco Symphony under Michael Tilson-Thomas. That was some kind of harmonic convergence.

And now a final word about that buffet which was served at the after party. In spite of the designer gowns and the fancy foods, you put out an all-you-can-eat spread and people go into a feeding frenzy. It might as well have been Applebee’s. Although there is a certain caché to being elbowed away from the shrimp cocktails by a woman in couture with a jeweled baguette handbag.

Addendum: So now it can be revealed that the picture above is NOT me, nor is it Mrs. Getty. But for my money this arts patron, Yurie Pascarella had the best dress of the evening, a vintage Gianfranco Ferre. All she’ll need for accessories in about 30 years are some rockin’ Mr. Magoo glasses.