While I love themed travels such as this one, I always have a hard time staying focused while on the road. In San Luis Obsipo, I found myself swinging by the kitschy Madonna Inn and taking a detour to Bubble Gum Alley (you may not want to know about this one). I got to thinking I could do a whole theme trip just on cheesy roadside attractions. I quickly refocussed on my Mission Mission, but now that I’ve ticked off the last one on my list, I’m not promising that I won’t break for The World’s Biggest Artichoke in Castroville or The World’s Largest Garlic Braid in Gilroy. But as this is a pilgrimage of sorts, and as I’ve now seen all the missions in California except for two, it seems allowable to worship at shrines of a different sort.

The British have a term “Busman’s Holiday” for a vacation during which one engages in activity that is similar to one’s usual work. So, by rights, I should be staying as far away from wineries as possible. Yes, there was the detour to Fess Parker’s Los Olivos winery, but I swear I was really out there to look at the scenery. Stopping at Tablas Creek Vineyard in Paso Robles is a whole different matter. If you’ve been reading here awhile, you know we are making mostly Rhône style wines. Our vine cuttings are originally from Tablas Creek. But, wait, there’s more. Tablas Creek is jointly owned by the Perrin family, the fifth generation owners of one of the most famed estates in the Rhône, Chateau de Beaucastel. Tablas Creek’s vine cuttings originally came from Beaucastel. So that must make Two Terrier Vineyards an honorary Rhône vineyard twice removed! In any case, they were kind enough to answer my archane winemaking questions, comp me a tasting and send me away with a free glass. 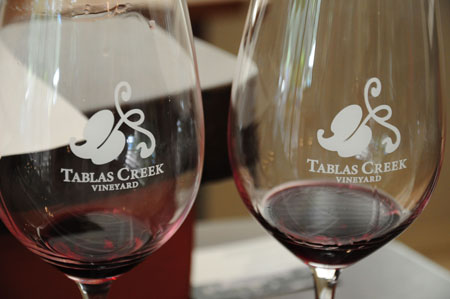 Or perhaps they were just placating me as you do the crazy cousin who shows up uninvited to the family reunion.

I could have wandered around Paso Robles’s winding golden hills and canyons all day, but I did have one final mission to hit. And a wonderful one it was — a perfect ending to this section of the Mission Mission. When I first started visiting missions way back when we first moved out here, the inside of the churches were whitewashed and ascetic. But the original missions would have been brightly painted, sometimes with faux marbling techniques that would have pleased the padres, but also with Native American motifs — especially since Native American neophytes were doing most of the painting. Mission San Miguel is unique in that it is the only mission with all of its original paintings. It is completely without snark that I dub the painter, a Salinan Indian named Esteban Munras, the Michelangelo of the Salinas Valley. 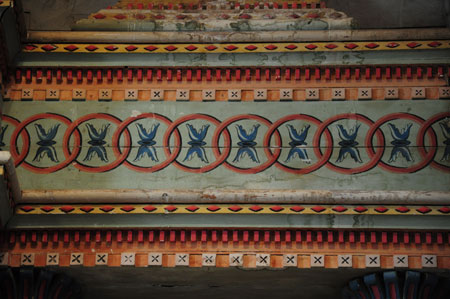 Like Michelangelo, Munras painted every inch of wall, ceiling and beam along with a band of Native apprentices that he trained. 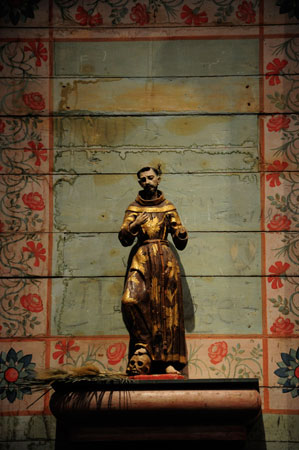 There is a bit of faux marbling and some painted columns, but much of the artwork involves lovingly rendered local flowers and birds. 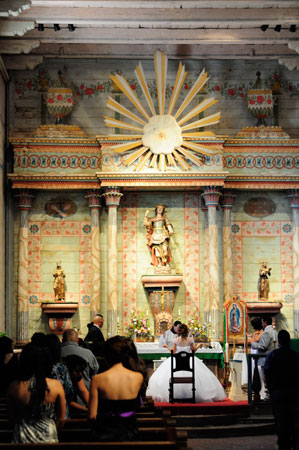 My visit was made even more special with an authentic Quinceañera blessing in progress -- with the Mass conducted in Spanish.

Apparently, San Miguel is a very vital community center. The Franciscan monks are back in residence, there was a wedding set for the hour after the Quinceañera finished and a community fundraising barbecue was getting set up on the grounds. If you are down that way on September 25, two dozen Paso Robles wineries will be pouring tastings in the monks’ private gardens, the first time they’ve been open to the public. 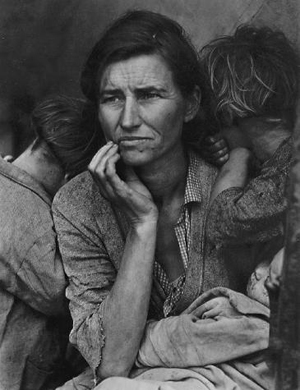 Driving through Nipomo near Lompoc got me thinking about Steinbeck and the Dust Bowl. Nipomo is where Dorothea Lange took this iconic photo.

So that brings me to my second side pilgrimage. Well, how can you drive through California’s coastal agricultural belt and the great Salinas Valley and not pay homage to John Steinbeck?  In addition, he has to be placed in the Pantheon of Roadtrip Authors. Of course, Grapes of Wrath was as grueling a journey in its way as The Odyssey, but Steinbeck surely must be awarded extra points in my book for giving us a more light-hearted roadtrip adventure with his dog in Travels With Charley. So you’ll find me tomorrow at the National Steinbeck Center.

Then it’s off to find that giant artichoke.

Addendum: Probably inspired by San Miguel, most of the other missions have begun repainting their mission interiors with reproductions of what would have been their original designs. Luckily, the padres kept good records and there are often original sketches still to go by. (You can browse through my pictures as I took lots of photos of the paintings.) 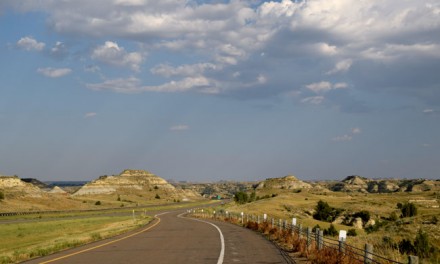 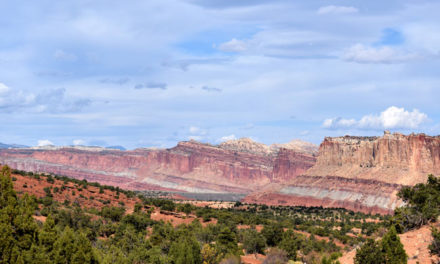