The thing about winemaking — which is about 90% grape farming — is that you have to be on your toes and on top of everything constantly. Even after two harvests, we made the classic novice mistake of thinking we could schedule things by the calendar instead of by Mother Nature’s timeline. Granted, it’s been a weird year — an incredibly cold, wet Spring that lasted well into June. Then in September, a series of several weeks of over 100 degree days. So we thought we could plot when the grapes would ripen and got lax about testing the BRIX level. (Roughly, Brix is the measure of the sugar content of an acqueous solution. And with grapes, the more sugar, the more alcohol you eventually get.) The Napa/Sonoma standard is to harvest at 25 Brix. The French typically harvest at 23 or 24 Brix. The former results in a 14% alcohol wine, the latter a wine that is more around the 12% or 13% alcohol. The great debate is: when does the alcohol overwhelm the fruit? The big bold Cabernets of California can often get harvested at 27 or 28 Brix. Some very influential palates, such as Robert Parker’s, are big fans of the results.

However, we wanted to strive for something closer to the Rhone wines, which are lower in alcohol. Not this year, apparently. We took our eyes off the ball for about a week — a week when the average temperature was over 100 degrees — and the Brix level went shooting up past the 23 at which we’d planned to pick.

So tomorrow, we pick the Grenache — which is reading at 28 BRIX, a reading I can’t believe is right. The Cinsault is right at 25. Our Mourvedre is 23. We’re hoping that holds steady with our predicted cooler temperatures.

Much of tomorrow’s Grenache will be chilled with a glycol chiller, fermented with a white wine yeast and used for Rosé — which we had a great success with last year. Of course, last year’s Rosé was a blend, which we created as a field blend. This year, we’ll ferment the Grenache and Mourvedre separately and then mix them together which is a more traditional method. If the Grenache is indeed through the roof in Brix, the Mourvedre may bring it down. If not, looks like we’ll be making Thunderbird and we’ll have to remarket to winos on Skid Rows around the nation.

In the meantime, there is one bright spot. We’ve discovered we have the world’s only grape harvesting terrier. As I was combing the rows pulling off “berries” to test for Brix, Oscar was picking up the discarded bunches that our crews had pruned from the vines last week. 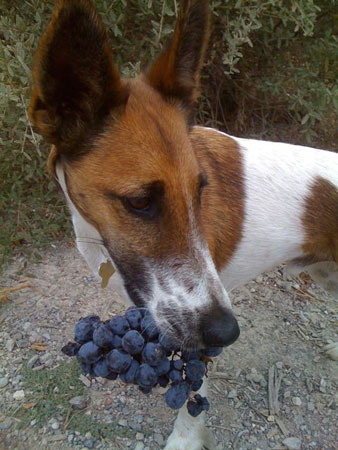 If only Oscar could speak Spanish. He could be tomorrow's harvest boss. 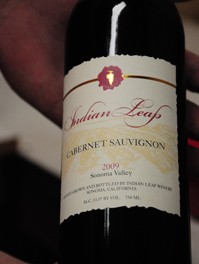