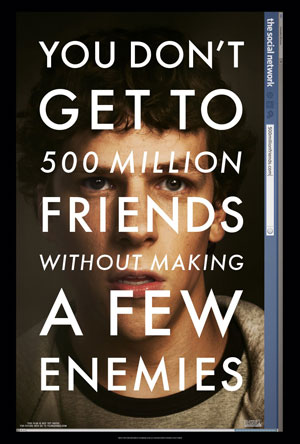 Just watched the movie about the founding of Facebook, The Social Network. It’s easily the smartest, best written, most thought-provoking movie of the year. Written by Aaron Sorkin, the script is a torrent of words that many of the actors deliver at rapid fire speed. It’s a movie you could see a dozen times and still not pick up all the zingers. In an amazing performance, Jesse Eisenberg, plays founder Mark Zuckerberg as a brilliant but socially stunted Harvard student, who, in most of his interactions, is completely tone-deaf to the nuances of social interaction. He comes across as a classic Asperger’s Syndrome case with a touch of Tourette’s. If he were a Shakespearean character, his tragic flaw would be that he has just enough understanding of human interaction to realize he doesn’t fit in, but not enough social skill to figure out why. In reaction, he keeps wielding his brilliance like a bludgeon, but is only dimly aware that, even though he CAN do something, he shouldn’t — like blogging vitriol about a girl who stormed out when he insulted her. Or screwing over the only friend he ever had. It won’t be giving away anything to say he ends up having “shown everyone”. But is now utterly alone.

The movie took on even more depth to me as I was involved in an ugly Facebook exchange that same day. The juxtaposition made me wonder if Mark Zuckerberg’s greatest accomplishment is that he’s created something we’ve all been sucked into that is rendering all of us more like him. We suddenly find ourselves interacting in a space where we can’t pick up the signals — facial expression, tone of voice, pacing of delivery — that usually give us the subtext of what people are feeling and thinking regardless of what they are saying. Sure, this is a fault of the Internet, not just Facebook. But it becomes especially pronounced in a setting that is aimed at mimicking the kind of interaction we used to engage in not that many years ago.

I’m not naive about the Internet. I know how it fosters rudeness, the digital equivalent of screaming, and a weirdly unconstricted form of interaction. No one can see you, they may not even know your real name, so many people take that lack of boundaries as an excuse to throw all social conventions out the window. Yes, I know that. That’s why my Internet interaction experience is pretty regulated. I only do Facebook. I only friend people, with very few exceptions, that I actually know in real life. I’ll pick you up if you are someone a real friend has recommended — not with that automatic Facebook recommendation thing, but with a real email or suggestion that we friend. I’ll friend you if I see you frequently in my friend’s threads and I’m amused, interested or awed at your wit and intelligence. I don’t friend you just because I once knew someone you knew in high school. I don’t friend you because we bumped into each other a few times at the dry cleaners. And I’m not obsessed with building up an impressive number of Facebook friends.

So far this has worked extremely well. I fire up Facebook and I see information about people I really care about. I post something and the reactions are the same as if I spouted it at a party. Some people agree, some people disagree and some people say my terriers know more than I do. But they say it with love.

I have one college friend, an incredibly articulate former journalist, who has a knack for gathering interesting people and sparking thought-provoking “conversations” on Facebook. Her thread always has some sort of lively debate with articulate adults who read widely and debate with facts and passion, not insults and the latest talking points from their favorite pundit.

One such debate started with voter apathy then moved on to the subject of whether Obama was right to spend so much of his political capital on health care reform. The thread was moving along as you might imagine, until two people got heated and crossed that line into name-calling. A few of us tried to lighten the tone with some humor. My contribution was:

I should note that the “Okay, have a nice day” is how Clarence Thomas’s wife ended her late night call to Anita Hill demanding that she apologize. Those of us who frequent this person’s thread use it often as a sort of jokey code. It means, “Awkward situation, but I’ll try to smooth it over.”

Well, it didn’t work in this case. The main mudslinger just upped her arsenal and started accusing people on the thread — and mostly me — of being narrow-minded, shouting her down, and attempting to trash her “like NPR did to Juan Williams.” Okay, a bit of an extreme reaction in my book, but I’ve learned that a quick apology — whether or not you think the subject really deserves one — is a good way to defuse a situation.

But that wasn’t enough, after a few more diatribes about “closed-minded Liberals”, the woman followed me to my In Box, through Facebook messaging, and proceeded to accuse me of practically stripping her of her Constitutional right to free speech. And saying that my call for civility was “being presumptuous enough to force [her] to change who she was to suit [me]”. 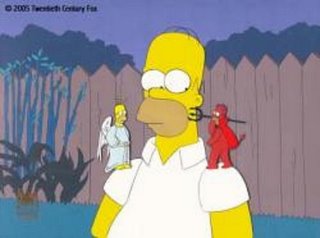 This was clearly a situation to bring in that Little Angel and Little Devil.

The Little Devil on my left shoulder prodded me to fire back that demanding that she turn Liberal was “forcing her to change”, asking her to do the Internet equivalent of removing her muddy shoes before tramping into the living room was just a call for good manners.

The Little Angel on my right shoulder won out:  “Just apologize for everything, soothe ruffled feathers, diffuse the anger by making the rager feel validated in their opinion.” I suppose apologizing as a tactic when you don’t really feel you owe one is doing the right thing for the wrong reason. But it so often works. It didn’t in this case. I assured her that we were all interested in her take on the issue and that she had some very well thought-out points to make, but I was afraid she was losing some people with the insults. I begged her to rejoin the discussion and share her perspective.

It was not to be. After a few more emailed insults she flounced out of my In Box with the parting zinger that she was going to “de-friend” the owner of the thread (who had done nothing). Okay, maybe “de-friending” happens every day. I don’t happen to know how to do it. And I’m still new enough to this that it sounds as dire as throwing gasoline on someone’s porch and lighting a match. Well, Hyperbole Alert. Maybe it’s more like tee-peeing the front lawn. In any case, not a good thing no matter how you look at it.

But my point wasn’t who was right or wrong in the argument. What’s shocking is that this woman was not some old Fox Network Screamer. She is a woman, judging from her profile, who is very accomplished and educated with a Masters in Public Policy from a prestigious university and participation in a number of honors societies and well-thought-of political and networking groups. Would she have ever reacted this way to me had we been having this discussion face to face? I tend not to think so. But Facebook had turned her into Mark Zuckerberg — flashing her brilliance yet unable to understand why the way she was doing it wasn’t winning friends and influencing people.

I’m not sure what the conclusion is. Be nice? Be careful out there? Friends don’t let friends do Facebook?

All I can say is the two parties you have to bring together are the Little Devil on your left shoulder and the Little Angel on your right.

Do the right thing, apologize, smooth ruffled feathers, be bigger than the other person. Then sit back smugly knowing that, in the best outcome — provided your opponent isn’t too advanced in Zuckerberg Syndrome — you probably made the other person feel just that tiny inkling of embarrassment for their actions.

See there are many ways you can embrace your Inner Zuckerberg. 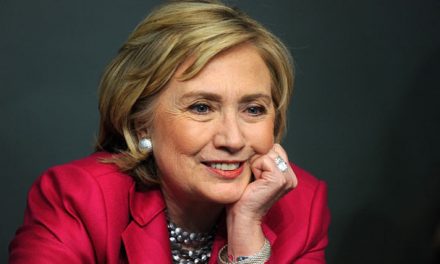 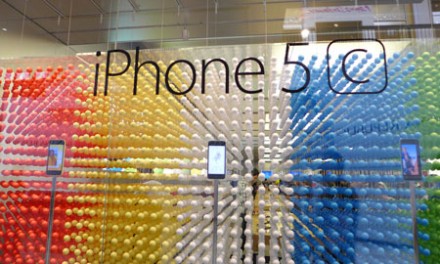 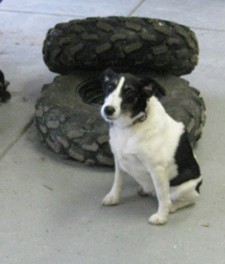