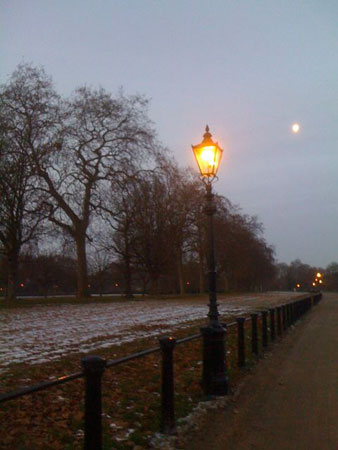 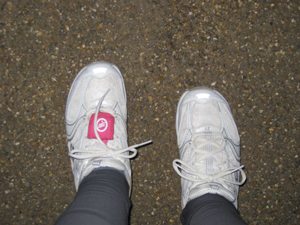 So I had this idea for actually making a New Year’s resolution stick. Of course, it was the same old boring one — get in shape, exercise more, lose weight. But I thought: if I start my power walking in London where it’s snowy and in the middle of a record cold snap, then when I get back to California, it will be a breeze to keep it up. This is an extension of the “it feels so good when you stop” school of exercise. So I allocated more room in my bag for exercise shoes and clothes than I did for regular clothes and electronics — which further committed me to go through with this plan. Surprisingly, I have.  Although not without a hitch.

The first full day in London, I had the hotel give me a wake up call at 6AM. Because I wanted to get out and into Hyde Park in time to see the sun rise. That was the first mistake, I walked and walked and it was dark and dark and dark. Finally after a good hour and a half, I gave up and went back to the hotel thinking that our recent lunar eclipse had somehow morphed into a day long solar eclipse. Why didn’t anyone warn me that, in winter, the sun doesn’t come up in England until well after 8AM!

Turns out, it wasn’t that bad that the sun didn’t come up while I was out. I’d chosen the boring way around Hyde Park. The next day, after a slightly later wake-up call, I went around the other way which was much more interesting. Here’s the route:

I walked down from our hotel, which is behind Harrods, to the Albert Gate by the Kuwait Embassy. That put me right into the park near Speaker’s Corner and what has been known as “Rotten Row” since King William III set it up in 1690 with 300 oil lamps, making it the first lighted “highway” in England. Good King Billy wanted a safe path to drive to his new palace in Kensington, but it quickly became the place for upper class swells to take out their horses, see and be seen, and pick up high-class courtesans. The name comes from the original name, Route de le Roi (Route of the King) and the British bloody-mindedness about purposely mispronouncing anything French.

I'm sorry to say, that at 6:20 AM, there were no dandies, no horses and no courtesans present.

Let me backtrack a bit to say that trying to cross into the park can be tricky — when you aren’t quite awake and you are trying to figure out which direction the traffic is coming from. 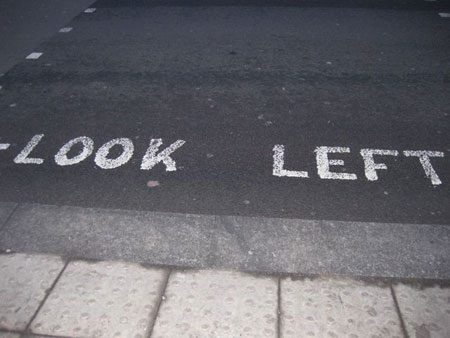 Luckily, the British seem very interested in keeping foreigners from being killed on the streets. 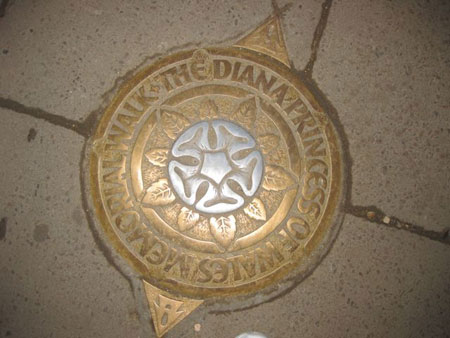 Once you are in the Park, just follow any sign that mentions Princess Diana. That will get you going toward Kensington Palace and always leads to something interesting. 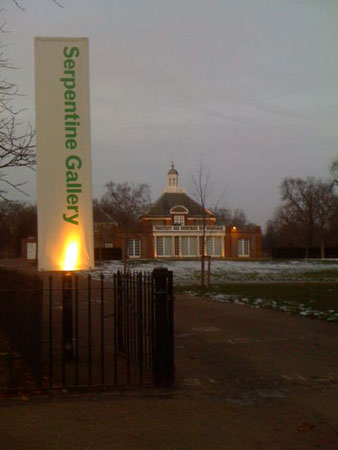 So I snaked my way (and I mean the pun) over toward the Serpentine Gallery.

Then I was further enticed with signs that promised The Princess Diana Memorial Fountains and the statue of Peter Pan. Unfortunately, in the dark, I didn’t find either. I did later realize they had the Diana Fountains turned off, so I hadn’t recognized them. But I never did find that damned Peter Pan statue. 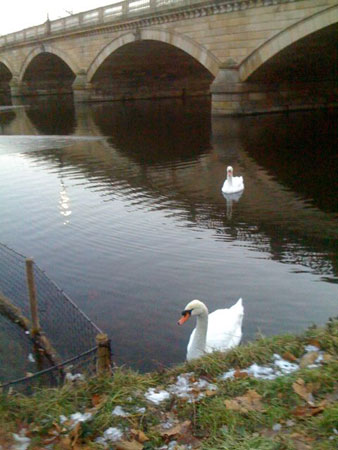 The signs pointed me down all sorts of blind alleys and passageways, until I came to this bridge and saw swans.

A little known fact: since the Middle Ages, the monarch owns all unmarked swans in open waters in England. So if I were to allow one of my terriers to jump in the water and harass a swan, I would technically be committing an offense against the Queen. (By the way, Andy has always insisted that the Queen dines on Swan Sandwiches and makes her version of Steak and Kidney Pie with swan, but I’m not believing this.) 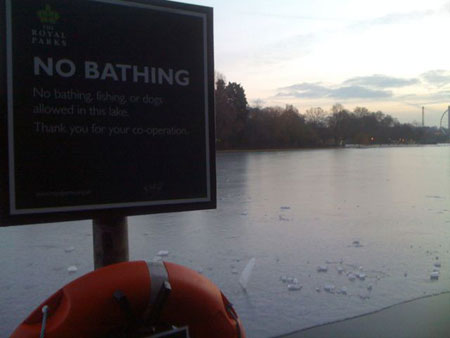 Another little known fact: you can not chip the ice off the Serpentine and dive in. And I was so tempted.

By this time I was getting colder, so I power walked toward any large interesting looking thing I could see. 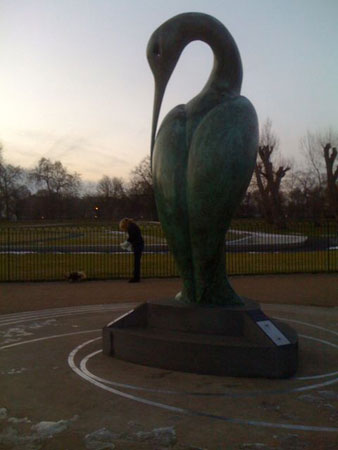 I spent too much time wondering what this giant bird was and only later realized those Diana Fountains (turned off) were right behind it. 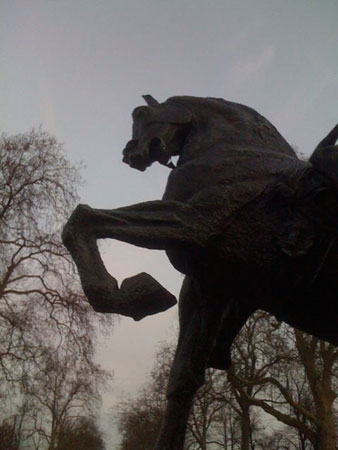 I turned left at a statue of a horse, which, disappointingly, did not have an upper class swell on it hailing a courtesan.

My goal was to get down to the Albert Memorial, which commemorates Queen Victoria’s Prince Consort. I am an unashamed fan of Prince Albert, a hugely energetic man who had his hands in everything during the 1800s. He influenced politics, the arts, sciences, diplomacy. Some say, he pretty much ran the country for his doting wife. Pretty good for a little known Prince from an obscure and impoverished part of Germany. Oh art snobs deride Albert as having more enthusiasm than taste, but I sort of like his approach. He seemed to master or, at least, inspired the “Throw Everything At It and See What Sticks” School of Art and Architecture. 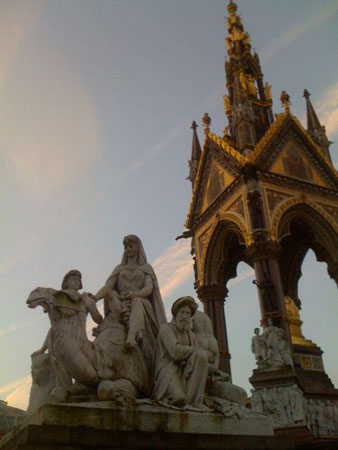 You've got to love a monument that mixes Byzantine style mosaics with early Renaissance inspired stained glass and tops it off with camels and sphinxes.

In fact, while studying in England, I once had to do a paper on the art motifs of the Albert Memorial. I think I counted up every major art trend since the Babylonians were building the Gardens. Of course, Albert was long dead by the time this was built. It was erected by his grieving wife as a tribute to him. 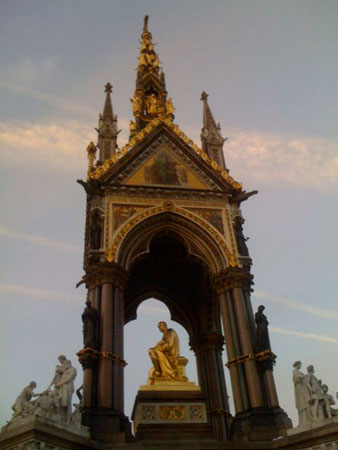 But you just know Victoria built what she was sure Albert would have loved. Then enshrined him in the middle of it. 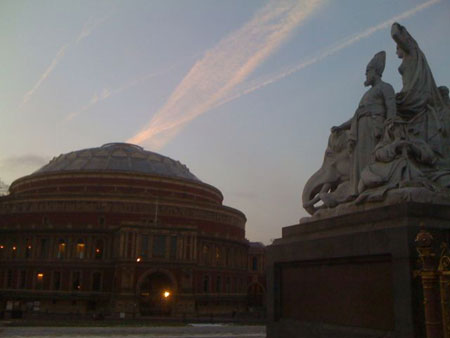 And it all overlooks the Albert Hall. What are the odds of that?

So that’s my Hyde Park walk. I’d highly recommend it — even if it’s freezing and dark and slick with ice. I saw things that I might have missed or not seen as clearly once the crowds had gathered and more traffic was on the streets. In fact, with my two routes, I think I saw the whole park. Except for that elusive Peter Pan statue that I never have managed to find in all my trips to London.

Until I realized that Harrods was featuring a whole series of “Peter Pan in Bondage” window displays. 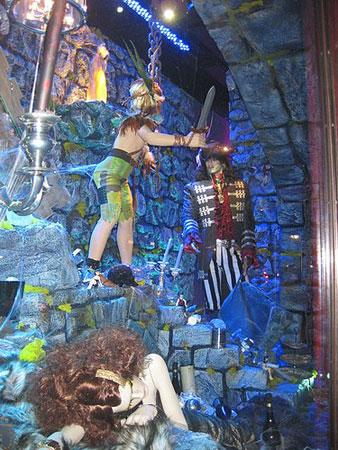 The windows also had a very "Johnny Deppish" Captain Hook. So probably it all worked out much better than shivering before some statue in a cold corner of a park. 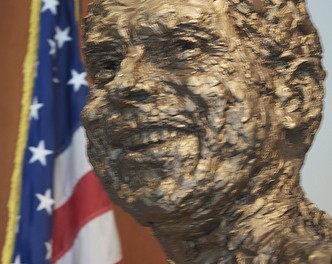 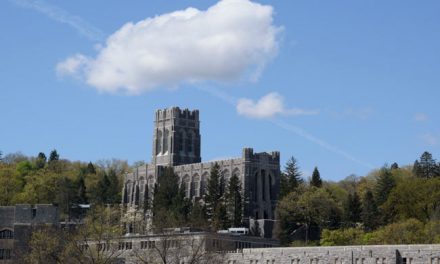 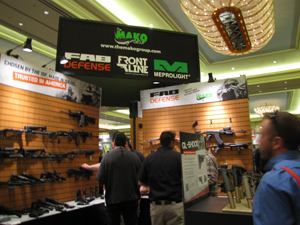