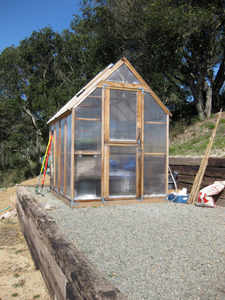 Anyone who remembers when we built the greenhouse at Flying Terrier Farms last summer has probably been wondering when we were going to use it. Well, we built it in the summer — and if you’ve ever spent a summer in Sonoma — you’d know that a greenhouse at that time would be more akin to an Indian sweat lodge. In other words, we had to wait until the weather cooled enough so that the thermal properties of a greenhouse were needed. Otherwise, we’d incinerate anything we put in it.

And — don’t laugh if you already know this — but I had to learn that you shouldn’t actually grow anything in a greenhouse far in advance of when you need to put it in the ground. In other words, it does no good to start tomatoes in November when they can’t safely go in the outdoor bed until late April. First of all, you’ll get some massive tomatoes that will be past the time they can easily be transplanted. That is, if you get tomatoes at all, because apparently plants don’t just react to warmth, but to the length of daylight to do their thing. So tomatoes in winter = not a good idea. Or at least that’s the science as I understand it.

So I’ve been champing at the bit to put something in the greenhouse, even though my go-to authorities, Sonoma Mission Gardens, have been telling me to hold off on tomatoes and peppers and all the things I want to plant until at least March.

Sorry, I can’t wait. You see I’m dying to grow my very own crops from seeds. And maybe even enjoy some modicum of success at it. 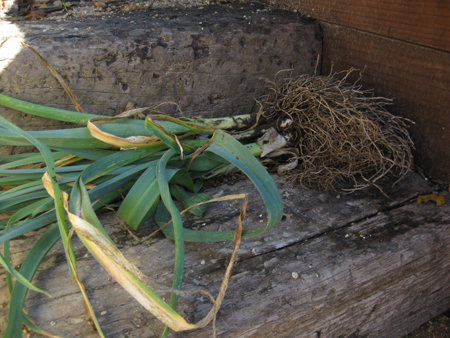 No matter how well and far I space my seeds, they all end up clumped and intertwined.

“But wait”, you say, “I seem to remember several posts where you had bumper crops, including so many tomatoes that you were canning gallons of marmalade, ketchup, chutney and the like. Haven’t you had success?”

No, I’ve had Cheater’s Success. Which is to say, I’ve always used “starts” not seeds. Well, I have planted seeds, but they’ve never really worked out. No matter how carefully I plant them and space them, they all end up in one corner or pocket of the raised bed all growing together in a clump. So I grew bushels of leeks, but they all grew in one mass with roots so intertwined that we had only one massive leek meal out of the whole enterprise. I don’t know if our torrential rains washed all my carefully planted seeds into one pool. Or if a particularly naughty terrier is digging up my beds and redistributing seeds. So, no, seeds have never really worked for me.

With the greenhouse came hope. I would grow my own starts from seed.

Patience is a virtue for gardeners. I have none. So on the last sunny weekend before our projected two weeks of storms, I decided to start my tomatoes in the greenhouse — at least two weeks before I was advised to. But, nothing planted, nothing gained. Besides, the wonderful thing about seeds — even organic ones — is that they are cheap compared to organic starts, which cost roughly their weight in platinum. So these don’t work out? I’ll just plant more. 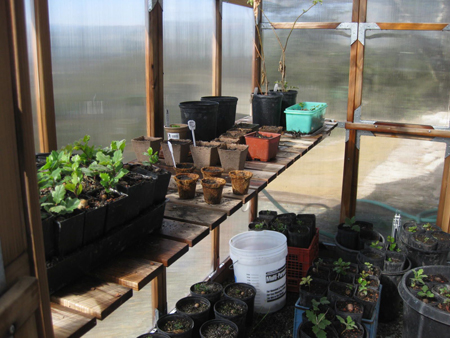 John the Baptist has made the greenhouse one of the larger oak baby nurseries in the county.

The first hurdle was jockeying for some room in the greenhouse, which John the Baptist has taken over as a Native Oak incubator. John’s wife has a native plant nursery, so John’s been gathering acorns from several of our five kinds of native oaks and getting them started in the greenhouse. Some of these will be replanted on our land. Some may find themselves out on the open market. (I toyed with suggesting to John that he could pull a Monsanto, figure out a way to splice terrier genes into these seeds and patent a new kind of oak. But John doesn’t go for that FrankenPlant stuff.) 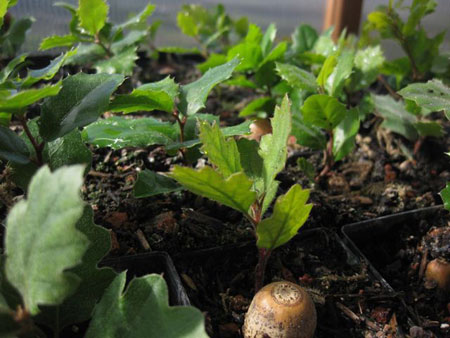 From tiny acorns, mighty oaks will grow. At least, if John the Baptist is doing the planting.

So for now, my tomato and bell pepper seeds are in some pretty rough and ready company. I imagine the conversation in the greenhouse is proceeding as it might if a couple of elegant San Francisco interior decorators stumbled into an Oregon lumberjacks’ bar. But then Monty Python taught us that lumberjacks can have a softer, more creative side. So maybe John’s tough native oaks will be teaching my tomatoes woodland skills. And perhaps my tomatoes will introduce John’s oaks to the joys of Romatic poetry, Broadway shows and a well-appointed room.

I think it’s going to be a wonderful exchange program. Watch this space and I’ll keep you posted on this cultural experiment.

And since it was referenced, and you can’t have TOO much Monty Python, I give you The Lumberjack Song: 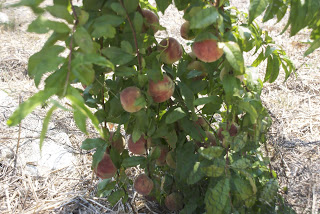