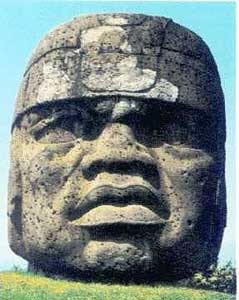 You’ve got to hand it to the Olmecs. Not only do archeologists and historians call them The Mother Culture of the Americas, but I think they can stand up admirably against any other ancient civilization. For instance, in 1500 BC, they had a written language, government, cities, art, culture, sophisticated astronomy and advanced mathematics that included the concept of zero (something the Greeks never figured out). Sure, you might counter, the Near East, India, China and the Greeks had most of the same and maybe even more, but I’m grading on the curve and giving the Olmecs extra credit.

Some historian, I can’t remember who but I think it was Jared Diamond of Guns, Germs and Steel fame, posited that Europe and the Mediterranean had an unfair advantage in development over almost all the rest of the world. Because of geography, Europe, especially Mediterranean Europe including North Africa and the Middle East, had the advantage of being part of a long horizontal strip of land thousands of miles long if you measure it from the Atlantic edge of Portugal to the Black Sea in the Crimea — but most importantly with the same climate and topography. What that means is that, anywhere along that parallel, an ancient man could migrate with his cache of seeds, his tools and his knowledge of native animals and plants and pretty comfortably know what he was in for. That makes the spread and interchange of ideas, language and technology fairly easy since you don’t have a huge learning curve in adapting to a new climate, new environment, new growing seasons, new plants, etc. And with all these ancient tribes walking all over the place, the available pool of knowledge grows pretty exponentially. In short, the ancient Iberian starts wandering through France and he brings and exchanges his knowledge for that of the locals. Those tribes then move through Italy, Greece and the Balkans and, well, you can see how this goes. It’s a transcontinental study group. 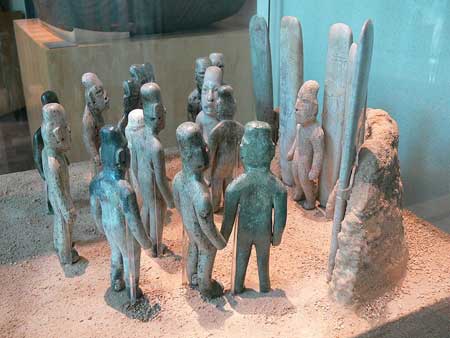 The colossal works aren't the only feature in the show. The miniatures such as this group of worshippers, displayed as they were found, are just as fascinating.

Now contrast that with continents like Africa and certainly North and South America which are very vertical. For a native in Alaska with specialized knowledge to get down to the Anasazi  empire in Arizona to share, he’d have to walk through multiple climate zones, relearning how to survive every step of the way. I think we can extrapolate that there wasn’t nearly the ancient tourism rate up and down the Americas that there was across Europe. That means the great civilizations of the Americas — the Maya, the Incas, the Anasazi, the Mississippian culture of Cahokia — largely developed on their own without the benefit of ambassadors from other great city states dropping in to swap technology. 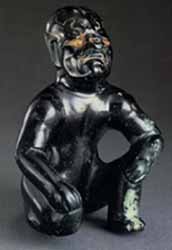 One of the sad omissions in the show were the statues of shamen in acrobatic poses. The Olmecs believed their shamen could transform into jaguars in the midst of these acrobatics.

But before any of them came the Olmecs. On the Southern end of Mexico, roughly around the cities of Oaxaca and San Lorenzo, the Olmec civilization sprang up and flourished between 1500 and 900 B.C. They developed all the things we usually attribute to the later Maya and Aztecs: pyramids, cities, massive sculpture, sophisticated carving and artwork, a hieroglyphic written language, calendars, astronomy, mathematics and ball games. They even had the wheel, although they used it only on nonfunctional objects such as toys, preferring human porters and water networks to fulfill transportation needs. The amazing thing is that, squeezed into the narrowest part of the Mexican isthmus, they seemed to have developed all these things on their own.

I think I briefly mentioned the other day that, before I was sidetracked by the  Bouquets to Art exhibit, I was on my way to view the De Young’s Colossal Masterworks of Ancient Mexico. Well, I did see it and was suitable impressed, although it only touches on the highlights of Olmec artwork. Don’t get me wrong, what is included is impressive. As this is the first significant exhibition of Olmec artwork in the United States in over 15 years, you should definitely get yourselves to San Francisco to see it before it ends in early May.

What is so striking about Olmec art, as contrasted to Mayan and Aztec (which heavily borrow from it) is how personal it is. Instead of stylized artwork, many of the pieces are actual portrait pieces showing individual features of specific rulers. And in contrast to the fierce and bloodthirsty nature of Aztec art, a lot of the forms are rounded and beautiful rather than awe inspiring — in the true sense of the word which means “striking fear”. 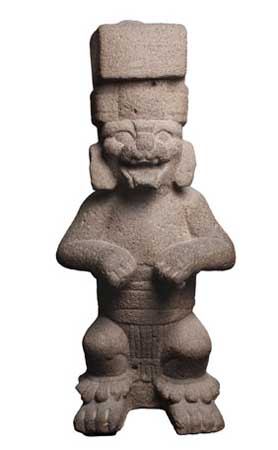 For me, this was the most striking piece, a dancing were-jaguar. The photo hardly does it justice, but no photography was allowed, so I'm confined to what I can find on the Internet.

What the exhibit focussed on mainly was the monumental. What I missed was the supernatural component. Maybe I’ve been reading too many Sookie Stackhouse novels, but what I love about the Olmec culture is that they seemed to embrace the idea of were-animals, especially were-Jaguar. Many Olmec pieces feature statues of priests holding were-Jaguar babies. Even more impressive are the shamen doing complicated acrobatics. It was believed, in Olmec cosmology, that shamen could transform into were-Jaguars in the middle of a complicated back flip. Sadly none of the carvings that illustrate this are included in the De Young exhibit.

But I encourage anyone within 100 miles of the De Young to get down to this show. You probably won’t see this many Olmec sculptures and artwork gathered in one place, even if you journey to Mexico. And if you are planning to explore Olmec art further, this is a great introduction. (Spring for the audio tour. The commentary by one of the top archeologists and specialists in Olmec art is well worth the price.)

And while you are admiring the fruits of their culture, remember that comparing the Olmecs to the European/Middle Eastern civilizations such as the Egyptians is like comparing Ginger Rogers to Fred Astaire. The former did everything the latter did — backwards and in high heels.