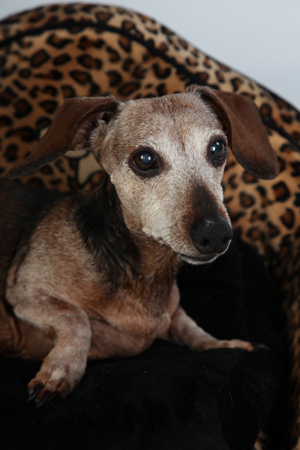 If you’ve spent any time on this blog, you know dogs are front and center here. Not just any dogs, but terriers. And not just any terriers, but Smooth Fox Terriers, arguably (at least it will be argued on these cyber pages) the BEST DOGS IN THE WORLD. However, lately another dog has been easing its way into this Terrier Zone: The Dachshund. At first I was alarmed. Lord knows there are few enough places where Smooth Fox Terriers are given their rightful due, what with Hollywood’s alarming habit of substituting the inferior Jack Russell even into stories that famously feature Smoothies (You, director of My Dog Skip, I’m talking to you.) But upon closer research into Dachshunds, I’m softening my stance. In fact, I’m now of the mind that Dachshunds should be positively embraced on a Smooth Fox Terrier site.

Oh, yes. I originally dismissed Dachshunds, as so many do, as just little hounds. Hounds! Hounds are those floppy dogs that lie around on the porches of people named Cletus. That is when they aren’t in packs hunting down Sidney Poitier, Tony Curtis and other escapees from Southern chain gangs. Nope, not our style of dog at all. But apparently there is great controversy about that classification. Some think the Dachshund was thrown into the Hound group because of the hund in their name, which simply means “dog” in German. While they do have those powerful sniffers, they also go to ground like terriers. In fact, Dachshunds are the only non-terriers allowed in the exclusive terrier realm of the Earth Dog trials. There are even factions that are agitating for the reclassification of Dachshunds into the Terrier Group. I wholeheartedly agree! 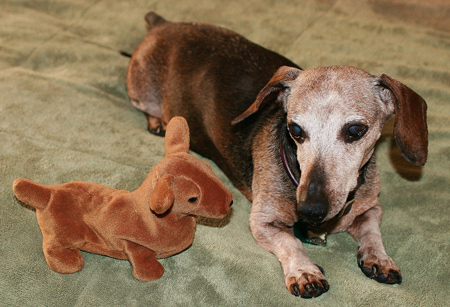 If you have Friended HRH Ansel and/or his staff, get on Facebook to give him a big birthday shout-out. Because for the next few days, it's all about him. He's 17 years young -- 119 in People Years.

What has changed my mind is “meeting” Dachshunds in cyberspace. Particularly Dachshund royalty in the person of HRH King Ansel who —  on Friday, August 18th — is celebrating his 17th birthday. Seventeen! That’s 119 in People Years! He doesn’t have many teeth left, his eyes are covered with cataracts and his once brown fur has turned almost completely grey. But apparently he is still ruling his kingdom and his household with an iron paw. His “staff”, Judy, has recently had to move off EST (Eastern Standard Time) to DFT (Dachshund Feeding Time), which occurs when and however often Ansel demands it. Ansel still walks with what Judy calls “his Richard Gere strut”, but he also demands frequent rides in the car with his head hanging out the window and his ears blowing in the wind. His other vehicles of choice are a Tundra truck, a power boat and a Porsche (German styling for a German dog!) And he’s still prepared to bark ferociously to defend his turf and send larger dogs scuttling into submission.

There’s only one word for this sort of behavior and style, my friends. TERRIERTUDE. Ansel, and it seems many Dachshunds, have it in spades.

So, we salute HRH Ansel on the occasion of his birthday and extend our welcome of him and his Cyber Pack of Dachshund Facebook buddies into the exclusive folds of Terrierdom. We are ready to admit that Dachshunds have what it takes to be Honorary Terriers in every sense of the word. In fact, our next act will be a missive to the American Kennel Club to petition for a reclassification of Dachshunds. Forthwith, we demand that they be included as full members of the Terrier Group.

And their new name shall be SMOOTH DACHS TERRIERS.

In honor of the Royal Birthday, a sampling of official Ansel portraits. (Queue the bagpipes and the Home Guard for the Royal Salute.) 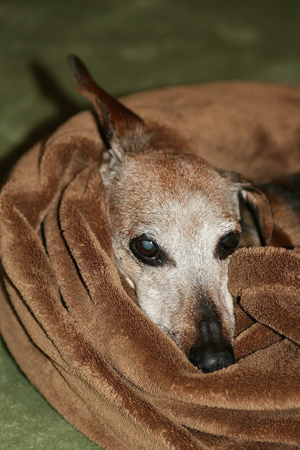 His Majesty is a bit hard of hearing, so let's have those birthday greetings loud and proud, either here or on Facebook. 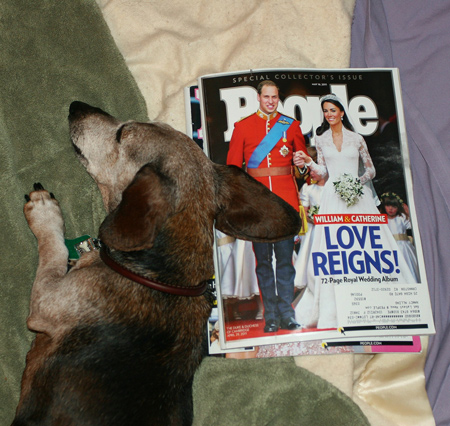 HRH Ansel couldn't fit the Royal Wedding into his schedule, but he did have Sovereign to Future Sovereign advice for young Wills. 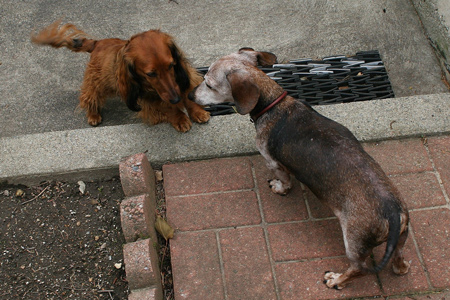 HRH Ansel greets one of his loyal subjects. Note that the King's head must always be higher.

And speaking of HRH Ansel’s subjects, here’s a small sampling of His Majesty’s CyberPack of Facebook Dachshunds, all of whom have letters of recommendation from Lucy and Oscar for reclassification as Smooth Dachs Terriers. 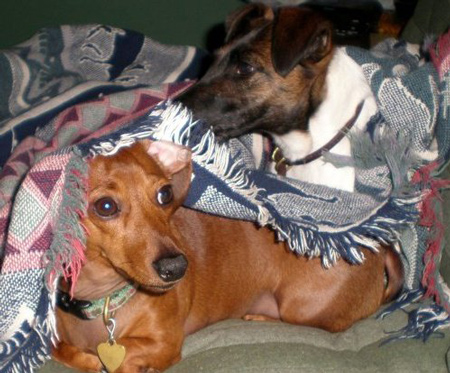 Britta, proprietress of Dachshund Downs in Memphis, has already been terrierfied by Nutmeg, the Smooth Fox Terrier. 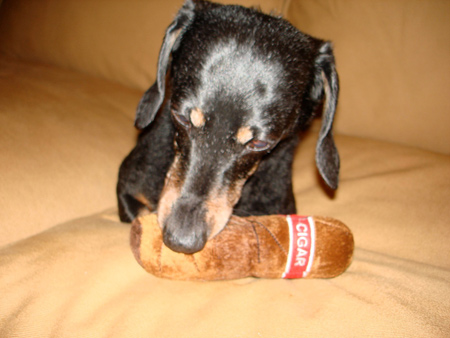 Augie from Tampa, in his 13th year, has taken up cigars. His staff, Pam, says he's "The George Burns of Dachshunds". 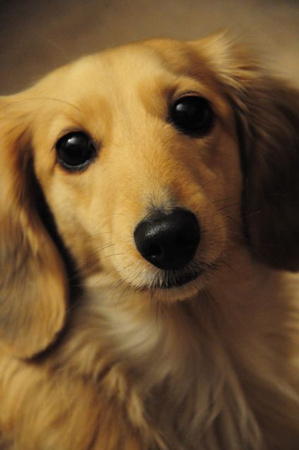 And now it can be admitted: Oscar and Lucy have a Dachshund cousin in England. Meet Roxie. She's a Dachshund Supermodel.

So clearly the barrier has been breached. If you are a Dachshund and want Honorary Terrier Status, have your people send cards and letters. I think the CyberPack and Virtual Playgroup are going to be regular features around here. 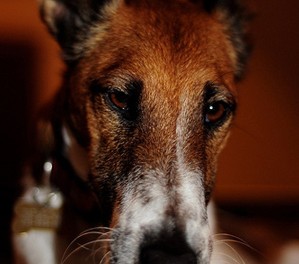