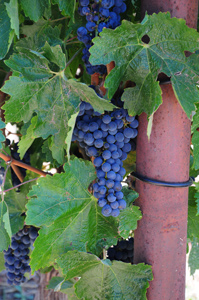 Normally, I can wring several months worth of posts out of the harvest and crush season. Not this year! Our unseasonably cool, wet Spring lasted forever in a year when summer never really came and we had rain (RAIN!) right through September. Then the temperatures spiked and the grapes went crazy making up for lost time. Suddenly, all across Napa and Sonoma, everyone’s grapes were getting near ripeness.

I can’t emphasize how bizarre this is. Different grape varieties usually have vastly different ripening schedules, which is why harvest usually starts in late August with the more delicate grapes such as Pinot and Chardonnay, continues through mid October with heartier, longer ripening reds such as Cabernet, finally ending with the late harvest Zinfandels sometime in November. Instead everything was delayed, then spiked so you had Chardonnay ripening late while Cabernet ripened early and both were reaching the BRIX point where they needed to be picked simultaneously. Add to that phenomenon, last week’s prediction of a major rainstorm due to sweep in early next week. Of course, rain on ripening grapes is a potential disaster. Best case, vines suck up too much water too late in the game and the juice is diluted. Worst case, mold and other nasty stuff develops. The result: mass panic across the valleys as everyone decided to pick all but the heartiest Cabs and Zinfandels, which can stand a little rain and hang on later in the year to dry out.

Which is how we found ourselves working like crazy with our planned reconfiguring and upgrading of our crushpad, then joining the rest of the valleys with a panic harvest. Most of the grapes were close enough to being ready that we just went for it and picked and processed all the Grenache, Cabernet and Cinsault. In one marathon two day session we processed a harvest that, in a normal year, would extend over  two months.

I’m here to say that, thanks to our new equipment — and, of course, the always much appreciated help of Cousin John — we survived and we think we are set to make our best vintages ever. 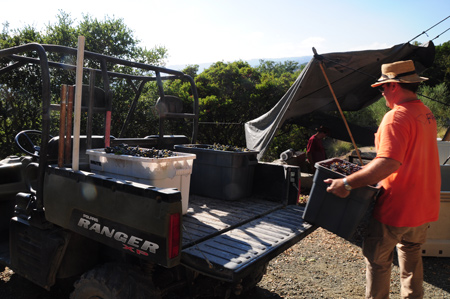 Our new crushpad system has eliminated tons -- literally tons! -- of lifting. But lugging bins of grapes is still part of the equation.

We are all the more grateful and astounded by our success because it was not always assured that Cousin John would be on board with upgraded technology given his stance on traditional winemaking. I’ve mentioned before that Cousin John is so Old Skool in his agricultural philosophy that he prefers a time before there were schools. For years, he has declared that he will use no winemaking technique that was not depicted in a 15th Century Burgundian tapestry he once saw in a museum in Paris. Andy, of course, is all about the high-tech equipment and methods. If he had his way — and we had the money — we’d have something akin to the astounding set-up we viewed at Opus One, the joint project of the late Monsieur Mondavi and the Good Baron Phillipe de Rothschild. 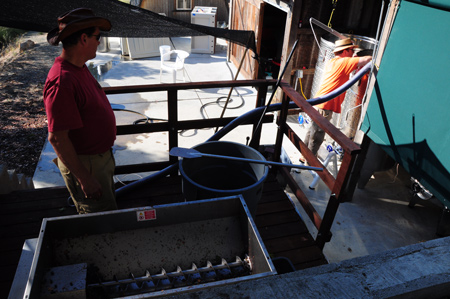 Our new crushpad system allows large hoses and pumps to do a lot of the grape transfer work. 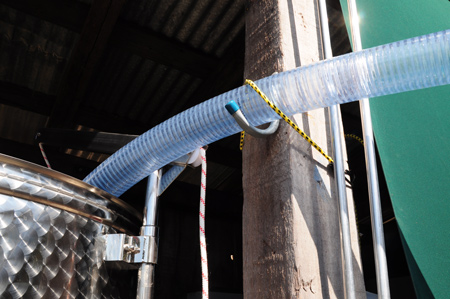 It may seem very high-tech, but the real secret is a large number of bungee cords.

Of course, we are nowhere near Mondavi/Rothschild territory, but this year marked the planned debut of our new crusher/destemmer, new steel tanks for primary fermentation and our retooled, revamped crush pad. Just by moving up from plastic, open fermentation vats, we’ve gone from the Stone Age of winemaking to something recognizable as a recent century. This is not a direction with which Cousin John is necessarily comfortable. In fact, shortly before harvest, he sent me a long article about a newly discovered archeological dig that uncovered, in Ancient Armenia, what may be the world’s oldest winemaking facility. I won’t go into detail, but it involved stomping grapes with the feet and allowing the juice to run over rocks and underground into buried clay vats. I was fully expecting Cousin John to start digging holes along the edges of the crushpad and hunting up some big-footed Armenians for crushing duty. 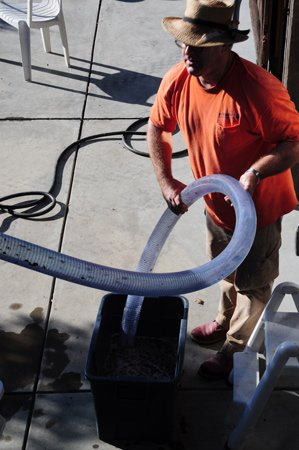 Of course, Cousin John, true to his traditional aesthetic, had to siphon off some juice for processing without sulfites or added yeasts.

Luckily, with our truncated emergency harvest and crush, John appreciated the relative ease and speed with which three people could process a large harvest with our new set-up. In past years, processing has been mostly about brute force and ignorance  — driving the ATV up to the vineyards where crews are picking, hoisting vats of grapes into the vehicle, racing down the hill, hauling the bins out, dropping grapes bunch by bunch into the crusher/destemmer, then dumping the crushed grapes, bin by bin, into the primary fermentation vat. The end result was that, if two tons of grapes were picked by the harvest crew, Cousin John, Andy and I would lift those two tons of grapes at least two more times, vat by vat, until we got them into their final resting place.

But now, our new set-up includes a large hose that siphons the crushed grapes out of the crusher/destemmer and directly into a tank. Hey Presto! One whole round of grape lifting eliminated.  Since we processed 2 1/2 tons, that means one whole series of relifting those grapes GONE. That’s huge — as my back will tell you. Secondly, we’ve built a platform that lifts the crusher destemmer up closer to the top of the crushpad, so we can simply tip each bin right into the machine — rather than crouching over and dropping them, bunch by bunch, into the destemmer. That’s yet another lifting of 2 1/2 tons eliminated. Cousin John and I were fairly levitating at the ease of the operation. And, for Andy, somehow his work effort had been reduced to the use of his index finger — to turn the crusher/destemmer button on and then off. It seems like an uneven distribution of labor, but, as Andy explains, he’s Management.

At some point, perhaps when we get the last grapes in this year, I’ll sit down and make a diagram of our new workflow. For now, Cousin John and I are just thrilled that the harvest hasn’t crippled us for days after. Sure we didn’t do it the Ancient Armenian way. And we’d need to spend about $50 million more dollars to even approach the Mondavi/Rothschild method. But Cousin John was able to assert an important bit of retro chic into our operation. 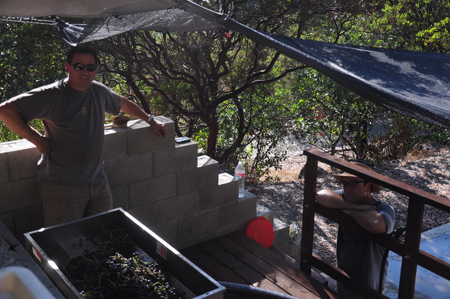 Did I mention that Cousin John has spent time on archaeological digs in Israel? He helped us rig up an archeology-style canopy system for the crushpad. We felt distinctly Armenian! 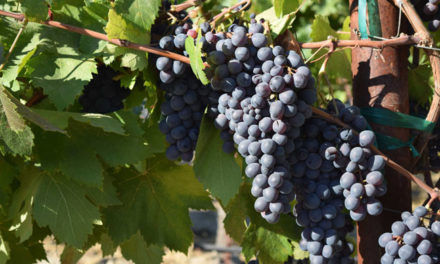