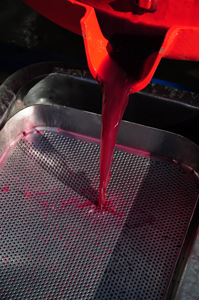 Every year since we’ve been making wine, I’ve been toying with this idea. With this year’s crazy, accelerated, compressed schedule, the life of a winemaker has finally driven me OFF drink.

In case you missed the backstory, in the past two years Wine Country has endured unseasonably cool and wet growing seasons that played havoc with winemaking. This year especially, when Spring and Summer never really came except as one or two sporadic weeks of heat between rainstorms, the harvest was completely upside down. Typically, in Sonoma and Napa, the more delicate and White grapes are harvested first, as early as August for Chardonnay. Then the heartier varietals — say Cabernet or Zinfandel — can hang on ripening until close to Thanksgiving. But between ripening that never happened, threatened deluges close to harvest and other weather factors, the Valleys were seeing Chardonnay harvested alongside Cabernet. In addition, BRIX levels became secondary as everyone panic harvested whenever a late season rainfall was predicted — whether the grapes were technically ready for it or not.

For us, this shook out as three varietals being harvested and processed all together instead of a week to two weeks apart for each. Then the fourth varietal, Cabernet, followed close on their heels. The good news is that our harvest — which can stretch from early September (Cinsault ripens first) through October and November as Grenache, Mourvedre and finally Cabernet ripen — was fast and compressed. That meant just one month, rather than three of harvesting, crushing, and primary fermentation which requires two or three punchdowns and several readings per day. 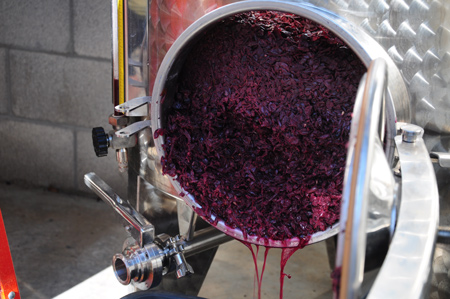 Winemaking. It all sounds romantic. Until someone has to clean out the skin and yeast sludge from the bottom of a couple of 500 gallon tanks!

The bad news was that it was an intense scary one month. We only have enough tanks and vats for one, maybe two harvests at a time. In a typical year, we can shuffle a varietal from primary to secondary fermentation vats just in time for the next grape to need the vat. This season was a like a game of musical chairs — played by jumbo jets circling O’Hare and running low on fuel. But we managed it. Now every varietal is pressed and into secondary fermentation. And I never want to see another glass of red wine. Ever. Or at least for a month.

So I’m declaring November a Wine-Free Month for me — with the possible exception of our annual Thanksgiving blow-out where we gather friends and Andy opens all the aged Bordeaux. Now there is that little matter that I will have to go up weekly to test the progress of the wine. That includes tasting. But I can always spit it out. If not inhaling doesn’t count as smoking, not swallowing wine doesn’t count as drinking. Besides, I just need it to wash over my taste buds to see if flavors are developing correctly. 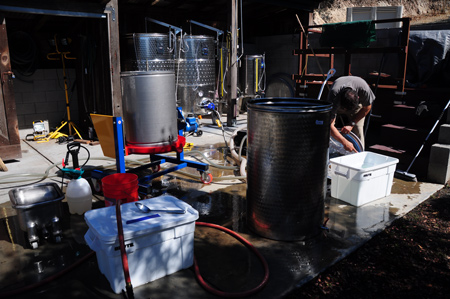 We've streamlined and upgraded our crushpad and workflow with lots more hoses and pumps. But there's still a helluva lot of cleanup and everyone and everything gets covered with wine.

So yes, after an intense month to six weeks of picking grapes, punching down grapes, being covered by grape juice in various states of fermentation, hauling soggy pressed grape skins up to compost piles and just living, breathing and sleeping in grape fumes, I’m done. Again, for a month. I’m sure I’ll be back about the time this year’s wine goes into barrels and last year’s wine goes into bottles.

But for now, line up those Pellegrino bottles. I’ve seen Ken Burns’ Prohibition and I’ve taken the pledge.

Come to think of it, I’ve also been up to my armpits in a bumper late season harvest of tomatoes. I’ve canned, jammed and sauced the weight of three toddlers in tomatoes.

(As you’ll notice, I’ve also taken the NaBloPoMo Pledge — which means blogging every single day during National Blog Posting Month. How will I do it? With all that spare time I’ll accumulate from not drinking wine and not eating or canning tomatoes!)