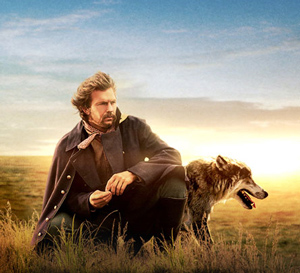 Oh, I kid Kevin Costner, but now I’ll do it with love.

When last we spoke, I told you of my shocking discovery that most of the middle school kids I tutor had no idea what a buffalo was. This was in the middle of a lesson on the Buffalo Soldiers, so it led to quite a bit of explaining. Then the realization that I needed to come up with a complete lesson on buffalo. But how do you structure a lesson on an animal that carries so much mythic, political, ethnic and iconographic importance? The buffalo stands for so many things that are American — beyond the fact that it is unique to this continent. Its history is so tied to the First Americans. Its near extinction is more than metaphorical for the genocide of those indigenous people and our government’s long history of economics over ecology, and the reminder of the things we sacrificed to build a country. Yet, even as we were taking a species that was once the single most numerous wild animal on Earth and reducing it to only a few hundred animals, Americans continued to embrace the buffalo as a potent symbol of our country. Or at least the country of our myths that we imagined we still lived in.

How do you convey all that to students, most of whom are recent immigrants from Central America, and who, have so much more on their plates than understanding the nuances of America’s mythology? Surprisingly, in all their TV viewing, they had never run across an image of a buffalo. They live in a city that actually has a small herd of buffalo out in Golden Gate Park, decendants of the few animals that were captured and bred to get buffalo up from a few hundred to their present number of about half a million. But even if I could get the kids out of school to see the Golden Gate herd, those few docile animals weren’t going to convey a fraction of the romance of the buffalo. No, I needed to spice up the lesson with exciting examples of what the buffalo once were. Much as I tried to avoid it, all roads led back to Dances with Wolves. 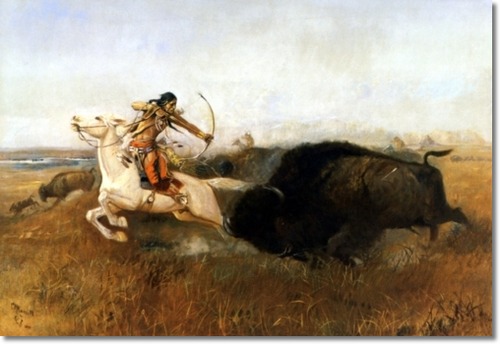 Let me just say that I didn’t have anything specific against Dances with Wolves. There is much I love about the movie: the cinematography, the score, the use of real Native Americans to play Native Americans… In fact I actually loved every part of the movie except Kevin Costner, who I always thought was the stiffest, least expressive actor in this American generation. With his monotone delivery and exactly two facial expressions, I thought he was out of place in an epic, especially when he donned that particularly bad hair weave. But as I prepared my lesson and watched the iconic buffalo hunt scene from the movie over and over, I began to have an appreciation for Kevin Costner. Maybe he was the perfect casting choice. Maybe his low-key persona lets what’s really spectacular shine through: the Native actors, the spectacle and, of course, the buffalo. Who could upstage them? And an actor who tried would quickly just become annoying.

My new-found Costner appreciation was elevated substantially when I fortuitously ran into a Making of Dances with Wolves documentary as I was channel flipping. Damn! The man had a vision and he let nothing stand in his way. (I won’t elaborate, but some of these trivia items from the Internet Movie Database will give you an idea.) Let me just pass along one tidbit: Dances with Wolves was filmed long before extensive CGI. While matte backgrounds were used to “extend” the cinematic scope of the herd, Kevin made this movie with a real herd of 2000 buffalo. And he, the cast and the extras rode actual horses into the swirling mass of 1000 pound plus animals for every take. So the scene may stand as the closest modern viewers will ever get to what a buffalo herd and a buffalo hunt was like.

I’m here to tell you: the myth of the buffalo, as presented by Kevin Costner, is still as potent as ever. After I had the kids practice their reading with a short lesson I’d written on the history of the buffalo, I turned on Dances with Wolves cued to the buffalo hunt scene. Even on the small screen of my laptop, the kids were on the edge of their seats. Luckily, we were in the little isolated classroom where I often hold my tutoring sessions. Because they were whooping and hollering by the time Kevin drops a bull buffalo just before it can gore Smiles A Lot (played by the wonderfully named Nathan Lee Chasing His Horse.) 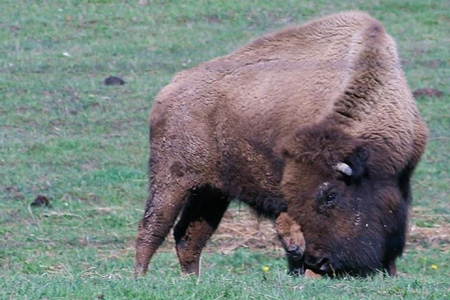 In a wonderful bit of synchronicity, a college friend sent me these pictures from a friend of hers at Randolph Farm in Casanovia, NY. One of the buffalo she owns has just given birth. The little calf is almost hidden underneath its massive mother.

Of any lesson I’ve taught, this one brought the most discussion and enthusiasm. And in a fortuitous twist — which I attribute to the psychic influence of Kevin Costner — the Internet, which is usually blocked or partially blocked at the school, gave me unrestricted access. So, while we talked about how aggressive and dangerous buffalo are, I was able to fire up YouTube videos of clueless tourists having their cars gored by buffalo in Yellowstone Park. Call it the frosting on the cake.

Now that I’ve got my act together, I’m still taking it on the road. There are a few of my kids I haven’t yet seen, so I’ll be repeating the Buffalo Lesson for the next week. And I purchased Dances with Wolves which I’ll lend out to the kids to take home and view.

So I urge you, go rent or buy Dances with Wolves. It’s out in a newly remastered Blu-Ray edition that is supposed to be fabulous. Kevin must be praised, praised I tell you, for recreating a part of the American story and mythology that resonates powerfully — even for non-American kids, even for kids who barely speak English and even when presented on a creaky old laptop.

Kevin, thank you! And I’m looking forward to your new project, a History Channel miniseries on the Hatfields and the McCoys. When I teach a lesson on hillbillies, you’re gonna be my go-to guy.