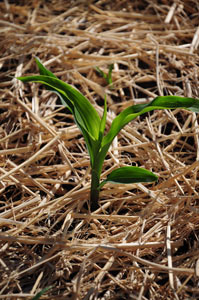 Hmmm. The answer is: it does and it doesn’t. But by far the largest crop around here seems to be snakes. First, the vegetables. Anyone who followed my tomato explosion and subsequent canning frenzy of last year knows that I have a terrible inability to thin my crops. I go all Rick Santorum in the garden and every seed is sacred. If I plant it and it comes up — and most of my seeds seem to sprout — I nurture each one until I have a veritable Cambodian landscape of vegetables. Knowing I was never going to change my ways, I hit on a good plan. I would carefully plant my starts in pots in the green house. Then I could plant just two or three seeds per pot. Since I use those brilliant Cow Pots — made of 100% compostable cow manure — I just plant the whole pot when the starts are large enough. This method also solves the second of my garden problems: our heavier rains and maybe the wind tend to swirl all my direct sown seeds into several piles. That leaves me beds with clumps of vegetables and large bare spots instead of neat rows.

So far, so good. We had another bizarre spring — heat waves, followed by hard freeze and torrential rains late in the season, then, overnight, back to blistering summer. But my seeds, snug in the greenhouse, sprouted and flourished. I had corn, three kinds of tomatoes, okra, squash, watermelon, peppers, eggplant and lemon cucumbers. Yesterday was the day I had set aside to plant them out in the beds — after not being able to get up to Sonoma for the past week.

As I walked up to Flying Terrier Farms, I met John the Baptist who looked as if he had a terrible secret to tell me. He did. One of the workmen up at the site of some construction we’re doing had unhooked the hose that feeds the greenhouse sprinklers and never rehooked it once he was done. My nascent crops had baked in 90 degree temperatures (probably much more than that in the greenhouse) for several days before John discovered something was wrong. It was too late. My crops were beyond wilted, they were more than fried, they had dried so thoroughly some of them were actually powder. 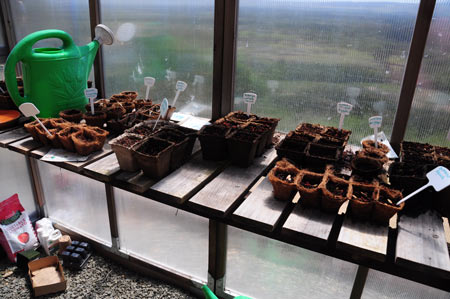 You would never know some of these sprouts were several inches high. The heat literally turned them to dust. 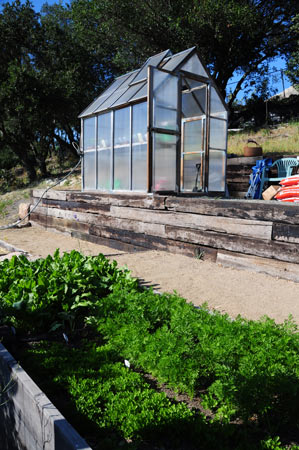 Outside was a better story, but our sudden onslaught of summer might not bode well for these carrots, beets and celery. 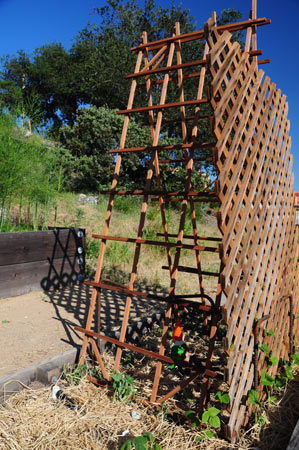 Likewise the peas and beans. But this elegant Pea Contraption that John the Baptist built me is way cool.

Luckily, I’d direct sown most of my corn. The plants in the greenhouse were to supplement rows and replace any sprouts that didn’t make it. I didn’t have such luck at the gardening store. Starts are pretty much over in Sonoma. So I’m faced with sowing seeds again and having all my crops about a month or more behind where they should be.

Still, as I mentioned before, we do have one bumper crop. Snakes! Mostly rattlers. Which is adding a whole level of complexity to the work of John and his crew. We have a No-Kill policy toward rattlesnakes around here. Which may seem foolish until you find out that, while much of Sonoma was overrun with moles and mice after last year’s record rains, our population was under complete control — with no effort on our part. We’ve read that Northern California rattlers are not as aggressive as their southern cousins. And that makes sense. Wouldn’t Northern California snakes be just as mellow as…well…Northern Californians? Which isn’t to say that we don’t give them healthy respect and snakeproof all the traveled areas with high weed mowing and homemade snake repellant. 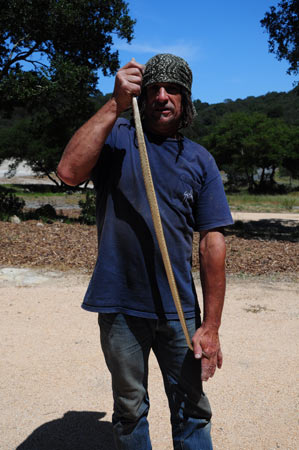 Then there is this guy. A gopher snake. As modeled by John the Baptist.

I’ve seen several large ones around lately, which is good. These guys are also voracious eaters of moles and mice. But, despite their disturbing habit of flattening their heads, assuming strike posture and rattling their tails, they are not poisonous. They usually don’t even bite. They are known for bumping their heads against things they want to scare away and constricting things they want to eat. I could use a guy like this around the three garden beds I have near the barn. So I had John release him there. 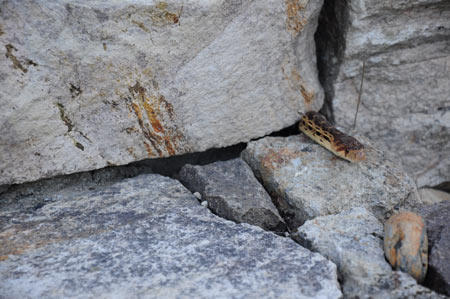 He quickly found the perfect hidey place near the bottom of the stone steps to the barn. 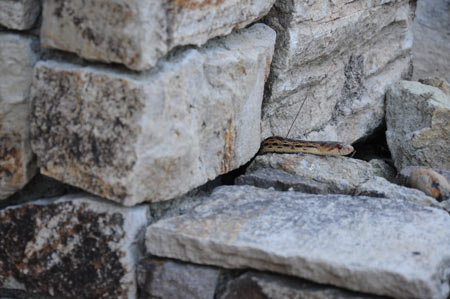 Where he spent the rest of the afternoon slithering in and out of his hole to alternately bask and hide.

If you remember your Tom T. Hall, you’ll know why we’re calling him Sneaky Snake. And why we’re keeping a close eye on all our root beer. 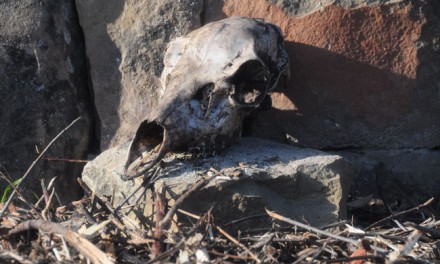