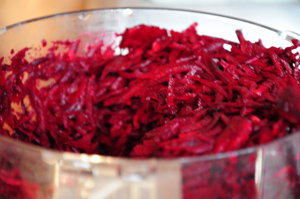 Since my beets are proving so delicious — and I’m not sure when they will suddenly turn fibrous and icky — I decided to make my first canning foray of the season. The chosen recipe was Beet and Orange Relish from what is becoming my go-to book on preserves, the excellent Jellies, Jams and Chutneys by Thane Prince. You’ll recall this is where I got my authentic Tomato Ketchup recipe, which is the product I’m sure will eventually win me the blue ribbon at the Sonoma County Fair. But today, was all about beets. I needed 2-1/2 lbs for this recipe, so I dutifully picked a mess of them. Then I weighed them and ended up short. And mine were so small, I couldn’t imagine peeling all of them as the recipe directed. So, sue me. I brought in stunt beets from Sonoma Market. Because, what if I end up not liking Beet and Orange Relish and I’d wasted 2-1/2 pounds of my little sweet beets? Anyway, to the left is what Thane Prince says you’ll need.

A quick wash with plain soap removed all the red, no problem!

First step: peel the beets and grate them coarsely. Thane had a lot of warnings about how this would be messy and stain everything. But I’d done my research on beets and learned that the molecules of beet juice are too big to bind with anything. People have been trying to “fix” beet color as dyes for centuries and nobody’s had any luck. So I boldly rejected all her cautions about rubber gloves, protective cloths and paper. But I will caution you not to even attempt this step without a food processor with a grating attachment.

Next step: grate the zest from the oranges. Having gone through this process for marmalade — which requires long thin, uniform strips of zest — I was dreading this step. But all you need here is the shredded zest. 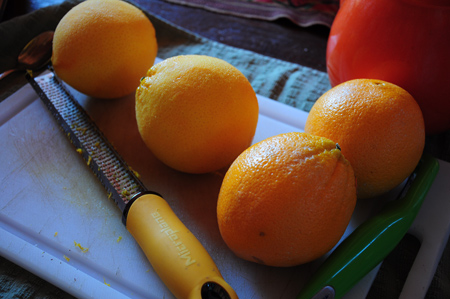 Using a handy tool called a Microplane makes this process a snap.

After that, peel the oranges, removing all the pith and cut the fruit into small dice, removing seeds and excess coarse membrane. Or if you use a food processor and seedless oranges, it’s that much easier. Now the spice mix. Finely grind the cloves cinnamon, allspice berries and coriander seeds. 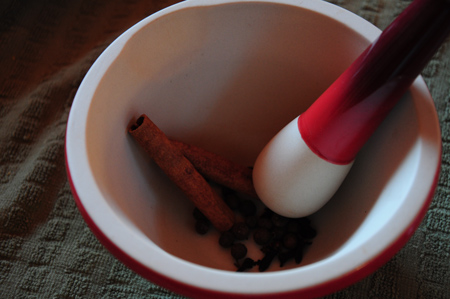 I find a mortar and pestle immensely satisfying, but you can use a coffee grinder.

Now here’s where I need to diverge into discussions of chimps and terriers. I was expecting the beet peeling, orange zesting and spice grinding to take a lot more time than it actually did. So I cued up a downloaded movie. I chose the documentary Project Nim. I wish I hadn’t. Within the first five minutes, I knew it was a story that was going to go horribly wrong. In brief, Project Nim is about a chimp and a succession of clueless hippyish researchers — surprisingly mostly from Columbia, but, in retrospect, I suppose you can still go to Columbia and be clueless. Anyway, one professor gets the idea to raise a chimp as a human and teach it to communicate through American Sign Language. So he goes to a research station that raises chimps, gets one ripped from its mother’s arms at two days old and gives it to a hippy dippy former student and her eccentric wealthy blended family in New York. I’m not sure why this family was chosen, except for the fact that the professor had once had an affair with the student. Because this woman has no clue about animals, let alone chimpanzees — which strike me as animals you’d better be pretty well up on if you are going to bring one into your New York brownstone with your seven kids and your skeptical husband. In the following years, the chimp, now called Nim Chimpsky, is raised as an indulged and spoiled child in the midst of power struggles and sexual tensions between the researchers. And through it all, no one catches a clue when this cute little ape starts growing bigger, incredibly strong, goes through puberty and gets more and more aggressive and, well, more chimp-like.

Listen, I’m the last person who should be throwing stones at people who indulge their pets. But most of the time I am aware that pets are ANIMALS. I had a sharp reminder of that the other day when Oscar went into the red zone while trying to catch a squirrel that had run under the terrier-proof fence that keeps terriers from getting under the wine processing laboratory we call Dr. Frankenwine’s Lab. I’d foolishly let him run around the building, barking and getting himself more and more worked up. Usually, I know not to let him get to this stage and usually I remember that I have to give him a lot of harsh commands before I attempt to touch him in this state. Instead, I grabbed him by the collar. And got a sharp nip. It’s amazing that he didn’t even break the skin, but the force of those jaws left a good bruise. Of course, he immediately flattened down into submissive posture and was very sorry and ashamed of himself. But this is an 18 pound terrier. Imagine a chimp that is getting to be five foot tall with the strength of a weightlifting adult man. The lesson being: take care with anything baring sharp teeth that has animal instincts. 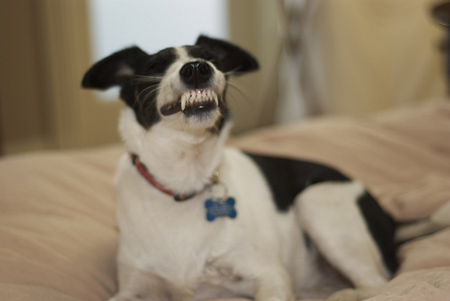 No matter how cute and furry your pet, respect the teeth!

I think you can guess how this all ends. Nim starts attacking people when he doesn’t get his way, sometimes quite severely. The professor decides to end the “experiment” and ships Nim back to the facility where he got him. So overnight, Nim goes from indulged child to living in a cage. It gets worse from there, although the professor, in interviews, never seems to understand the great wrong he’s done this animal. As one of the former grad students says, “We didn’t do right by that soul.”

So that was a bit of a sour note which I’m hoping doesn’t transfer to the taste of my relish. Word to the wise, when you chose a movie to watch during rote canning tasks, make it a RomCom.

So where was I? Ah yes, next step: put all ingredients — the beets, the orange and zest, spices, onions, ginger, garlic, sugar and red wine vinegar into a non-reactive pot. Bring to a boil, stirring until the sugar dissolves. Reduce heat. Simmer for up to 1-1/2hours until the relish thickens.

Now, Thane just has you ladle your relish into hot sterilized jars and seal them with vinegar-proof lids. I prefer not to have my hobbies kill my friends with botulism, so I routinely pressure can everything, even if, in this case, it’s probably acidic enough to be canned in a hot water bath. I just hate to take chances. 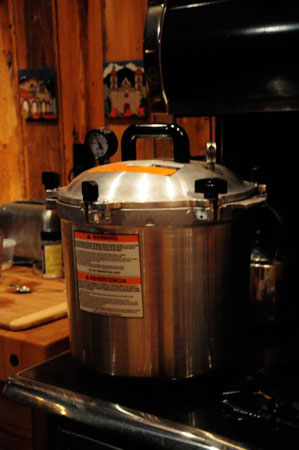 Oh, and I also took Thane’s suggestion to use muscovado instead of white sugar for a deeper flavor. At least as I sampled it in the pot, it had a sweet but not cloying flavor.

But I still couldn’t get the sour taste out of my mouth about poor Nim Chimpsky. 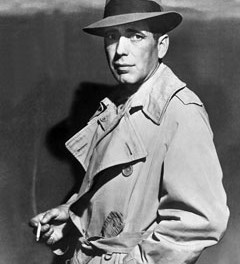 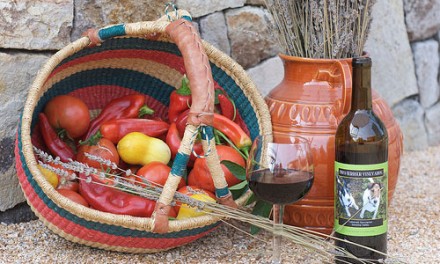 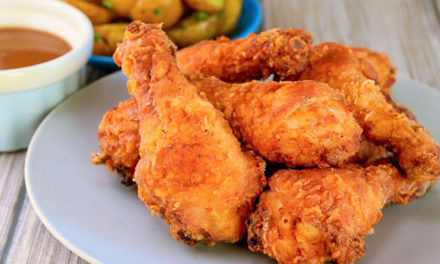