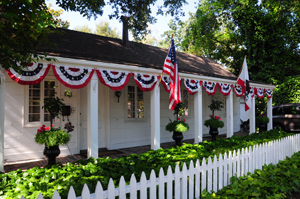 I have long and loudly proclaimed that Sonoma does the best small town Fourth of July festivities anywhere. Bar none. No matter what your small town does for our nation’s birthday, Sonoma does it better. Well, this year, Sonoma upped its game. What Sonoma knows that other places don’t is that there are certain inviolable rules to a proper Fourth of July, many of them involving a parade. But you can’t just have any parade. Your parade must be aggressively local and feature, in roughly this order: Veterans or floats saluting veterans, a nod to the key history and culture of your town, at least one local band playing Sousa tunes and marching, scouts and youth groups, classic cars, fire trucks, horses and humorous marchers and floats.

Now some don’t completely share my belief in Sonoma’s Fourth of July superiority. Andy and our friend Rob (both English) are somewhat skeptical of the Fourth of July, which they deem “an anti-British holiday”. A few years ago, they were complaining about how some Sonoma businesses were launching floats and marchers who showed little spirit other than commercial. I will not mention a local car dealer whose “float” was four of the cars from his lot, only one with an American flag on it, and a group of his sales people handing out business cards. I was willing to overlook this blatant commercialization because so much about the parade was right. Andy and Rob were insisting that I needed to get myself on the parade committee and enact strict rules for parade participation. 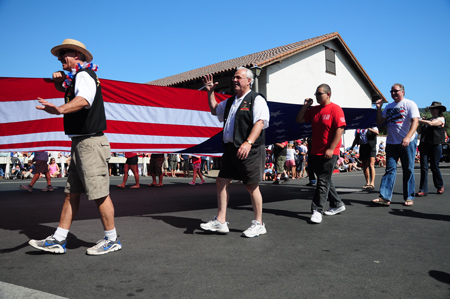 A Sonoma parade always features the Sons of the Golden West and their giant flag marching past the old Spanish barracks.

Turns out I didn’t need to. The excellent Sonoma Community Center did and got everyone lined up with a proper historical theme. If you didn’t follow the theme, it looked as if you were kept to strict application of town spirit in your entry. It was one of the best Sonoma Fourths ever.

The theme was absolutely perfect: a salute to Count Agoston Haraszthy on the occasion of the 200th anniversary of his birth. Visionary, pioneer and possible con man, Haraszthy is known as the “Father of Modern California Winemaking”. Sure, the Franciscan Padres were making wine long before Haraszthy showed up in Sonoma, but that was just barely drinkable sacramental wine made from local grapes. Haraszthy was the first to successfully bring cuttings from the best vineyards of France and other European countries and attempt to make wines that would rival the great vintages of the Continent. He was said to have introduced more than 300 grape varieties to California — many of which he smuggled in against strict French export laws. He also had the vision, upon arriving in Sonoma, to realize that the soil and climate were absolutely perfect for so many of those varietals. And he had the great good sense to get two of his sons married off to the daughters of General Vallejo, the governor of Sonoma whose personal land grant originally included most of Sonoma County. That immediately allowed Haraszthy to purchase a large parcel of prime Sonoma land for himself and get two more choice tracts brought to his sons as doweries. On this land he built two of the first modern wineries in California. And a footnote to history: our land butts up on both these tracts of land and may, in fact, have once been part of those original grants (although our land must have been deemed not worth bothering with, as it was never developed or planted on.)  But back to Harazsthy: he spent the rest of his years making wine, writing about wine, getting involved in lawsuits and bankruptcies, and eventually trying to develop land in Nicaragua where it is believed he was eaten by alligators. (Read more about Haraszthy here.)

So clearly Haraszthy is a rich subject for a Fourth of July tribute. In a deft move, the good organizers managed to round up some of his descendants to serve as Grand Marshals. 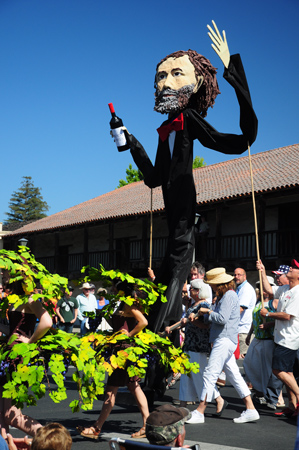 The parade kicked off with an 18 foot tall Haraszthy puppet surrounded by comely girls dressed as dancing grapevines. 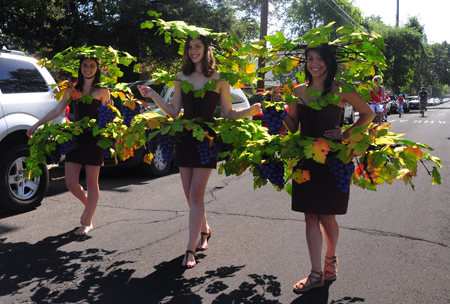 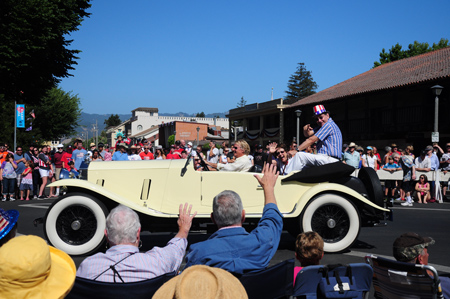 That means everyone can wave to someone in the parade that they know personally. 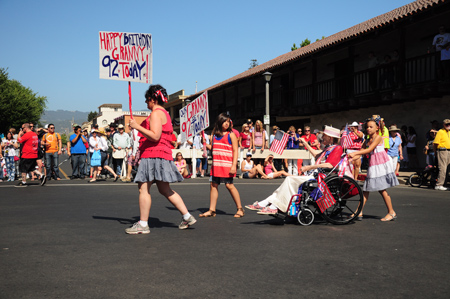 Sonoma also works to get at least one of its older citizens featured in the parade. 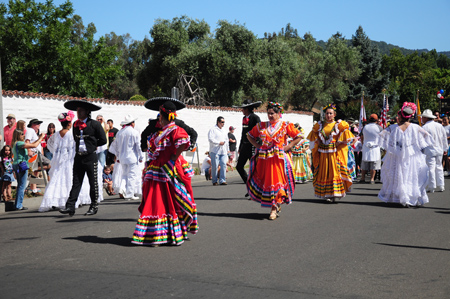 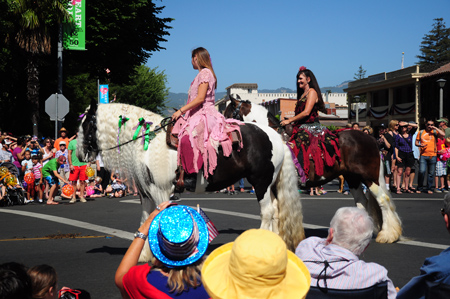 I mentioned that you must have a lot of horses in your parade. I wasn’t sure about these. They weren’t particularly historical or patriotic. 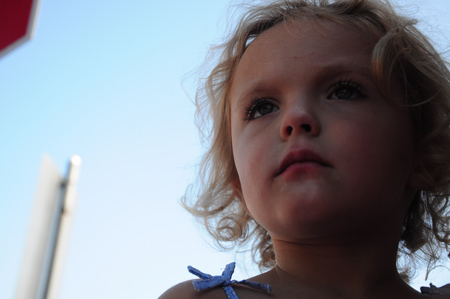 But our youngest critic, The World’s Most Beautiful Toddler, explained that they were PRINCESSES and they were THE BEST.

The other great thing about the Sonoma parade — which went on for two hours — was that if you got bored, you could wander into the Plaza, which our youngest critic gives an enthusiastic thumbs up. 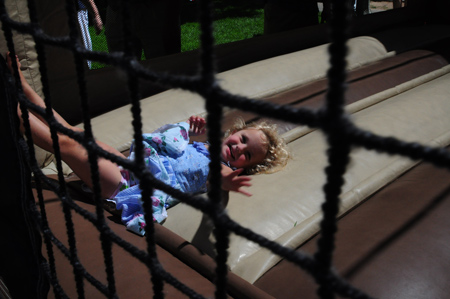 The local Mommie Group was sponsoring FOUR bouncy houses. You could bounce ’til you dropped (if you were below the height and weight limit). 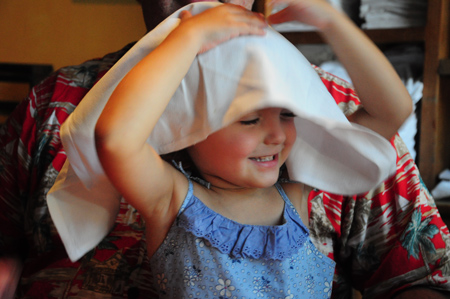 You are only steps from Maya Restaurant where the extra large napkins are perfect for making silly hats. 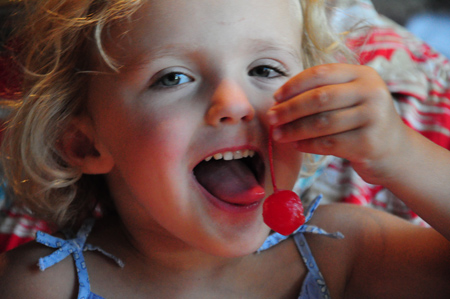 Also, the adults will order cocktails and you can take the maraschino cherries.

All in all, the critics, even the three year old ones, agree with me. Sonoma’s Fourth of July is the fourthiest!

(Addendum: Please don’t call Child Protective Services. I’m sure there wasn’t enough alcohol in those cherries to cause Amelia May to fail a breathalizer test.) 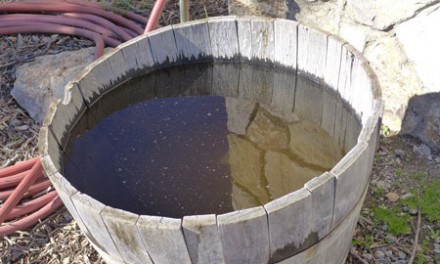 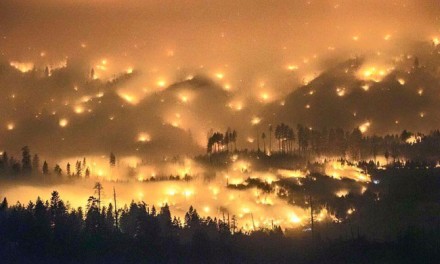 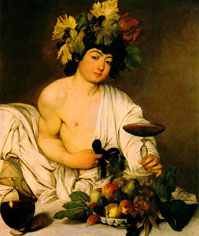 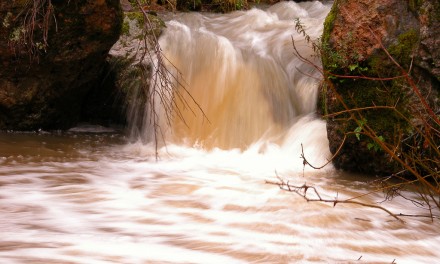