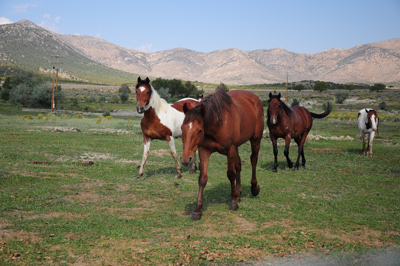 The point of this roadtrip has been to drive some lesser traveled roads in the West. So even though I did plan a few stops for sightseeing, the main point was the drive. But sometimes when you are just driving — especially on the older highways of America — you run across the most wonderful things. I found one of those things on old US 93, my second long haul drive through Nevada. I’d gotten an early start and was hoping to encounter at least some of the antelope and free range cattle all the road signs are warning me about. As I drove through endless empty miles of sagebrush and bunchgrass, I was thinking that this area must have been teeming with herds of animals at one time. They would have been able to run for miles on the plains then retreat back to the foothills all around when the sun got too hot. So why haven’t I seen anything other than a few specks off in the distance which could have been anything — antelope, cattle or just rocks.

Suddenly I saw a whole lot of larger specks moving in a such a big group that they were kicking up huge clouds of dust. Convinced I was seeing some sort of migration, I searched for a pullout so I could get out my telephoto lens to view them. Then I saw this: 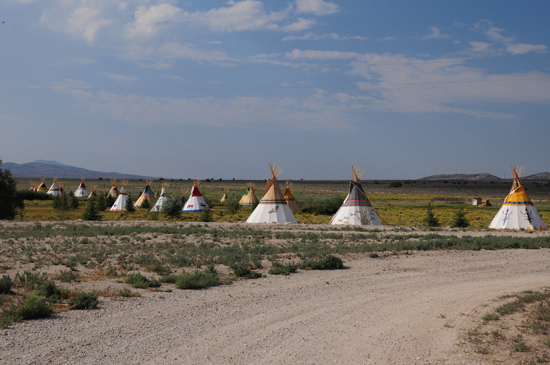 Mark Twain thought getting scalped might be the highlight of his Westward adventure. But I didn’t think there was much danger of that for me unless I was crashing an invitation-only powwow.

And as I started taking pictures, sure enough, out from the lodge behind me came an Indian. A Seminole-Cherokee named Travis Jackson, who is the caretaker for the property. Turns out, this is the Mustang Monument, a wild horse sanctuary started by the wife of T. Boone Pickens. Seems Madeleine Pickens has bought this 550,000 acre tract of land right up to Spruce Mountain and is fighting to save America’s Mustangs. Travis offered to give Lucy and me the full tour, so we hopped in the ATV and took off. 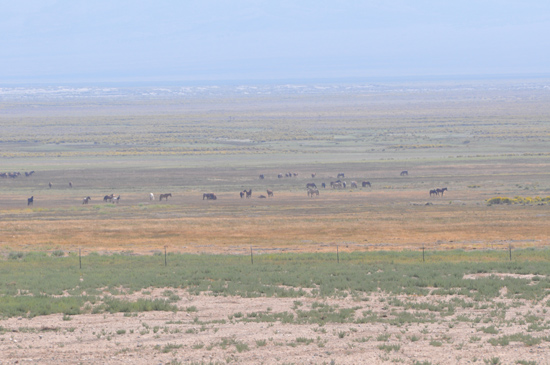 The wild herd we viewed at a safe distance because they are really, truly wild. Many of these horses were saved from BLM roundups and certain slaughter. 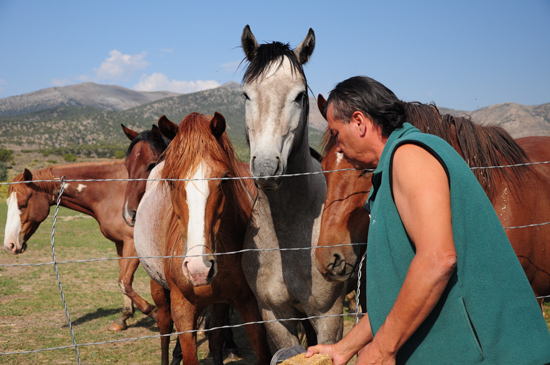 This small group is being trained as trail horses. They’re happy to eat grain out of Travis’s hand.

Which brings me to those teepees. They are actually eco-friendly lodging which will be a later phase of the Mustang Monument and offer the public a chance to get up close and personal with Mustangs. The website tells all about it. But Travis says this phase of the project is further down the road. The goal now is to save as many Mustangs as possible. But let’s just peek into those teepees. Because they are pretty tricked out. 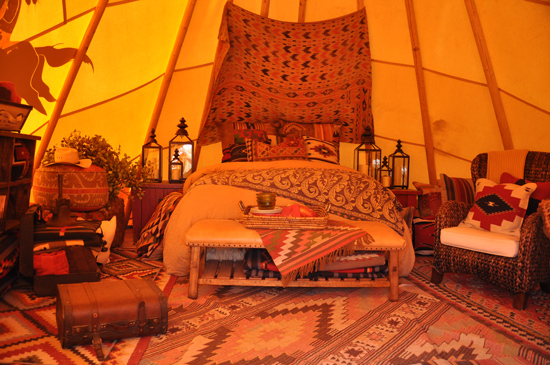 The floor is a raised wooden platform. Each exterior is painted with motifs from different Native tribes. The effect on the interior when the sun shines through is wonderful. 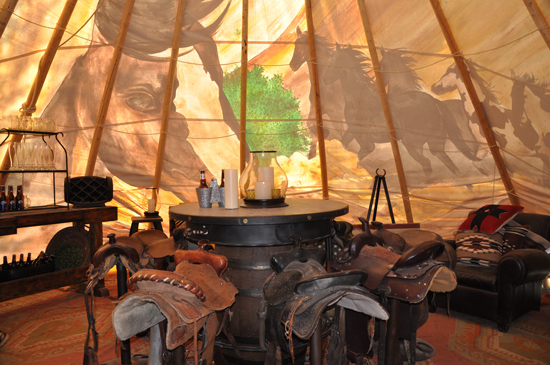 This teepee will be a “common room”. With a full bar, you’ll note.

I should ‘fess up that it was in this teepee that Lucy discovered a rawhide chew owned by Madeleine Pickens’ Dachshund. And she stole it! Sorry Madeleine. Sorry Dachshund Pickens. 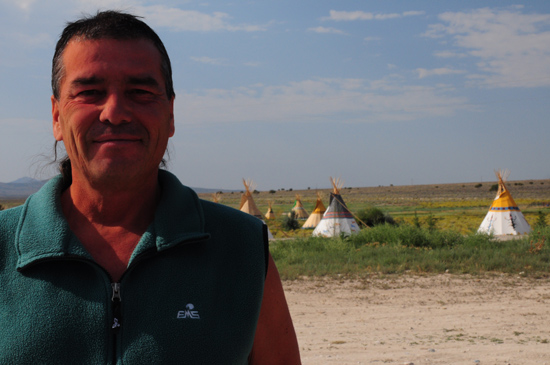 And it turns out Travis is like our John the Baptist — a master of all trades. He tends to the horses, keeps up the property, and  makes Native artwork and costumes for when the trained horses appear in parades. Thanks for the tour, Travis!

From Mustang habitat, we raced onward toward the moon. More specifically, the Craters of the Moon National Monument. These three lava fields in Idaho were created by a 52 mile long tear in the earth’s crust known as the Great Rift . The lava eruptions started 15,000 years ago with the most recent occurring 2000 years ago and geologists say it could erupt again. So lunar is the lava-created landscape that the early Apollo astronauts were brought here to train for their moonwalk. It was eerie to read — in the one nanosecond that I was able to get cell and Internet service since I left Elko — that Neil Armstrong had just died.

Even eerier, the smoke from the massive wildfires that are burning all through the West was being blown in on hot dry cinder-smelling winds. It made for a strange ambiance, but for extremely bad pictures. Everything looks over exposed due to the haze that kept visibility to about two miles. 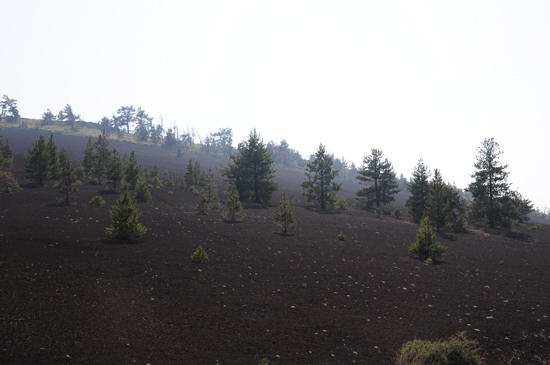 This cinderfield has long cooled — as evidenced by the trees growing out of it — but the smoke from the wildfires made it seem as if it had just come out of a volcano. 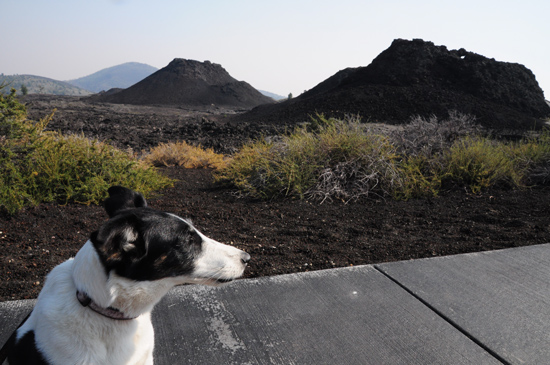 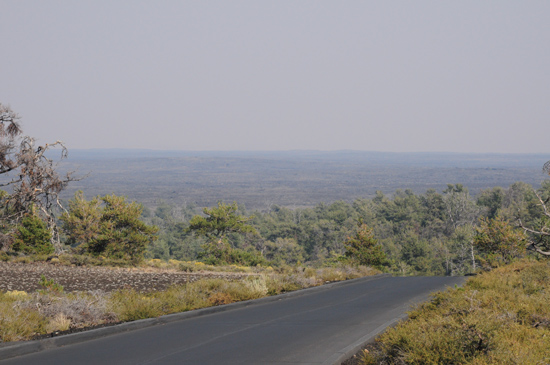 You could see eerie lunar landscapes for miles. Except that you could barely see a mile with all the wildfire smoke.

It should be noted that Lucy and I have two more odd connections with the park. One of the first to chart the Craters of the Moon was an amateur explorer who took his terrier along with him. After three days, he realized his mistake as the dog’s feet were worn and bleeding. Luckily, the park now features great paths — many of them wheelchair accessible — that take you to the best sights and protect the fragile cinders. Oh, and my distant relative, Calvin Coolidge, was the President who designated the area a National Monument with a backhanded compliment calling it “a weird and scenic landscape peculiar to itself”.

Maybe that’s why Craters of the Moon is one of the least visited National Monuments. When I asked for directions from the desk clerk at our motel, she admitted she’s lived here, an hour away from it, and has never been. And she questioned whether I should make the drive: “You know you can only get there on an old highway. It’s just two lane blacktop all the way.”

Honey, you have no idea…

Catch up with posts on the pre-planning here and here and Day One, Day Two, Day Three. 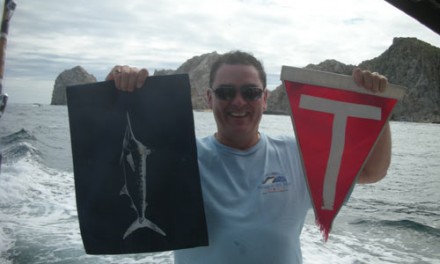