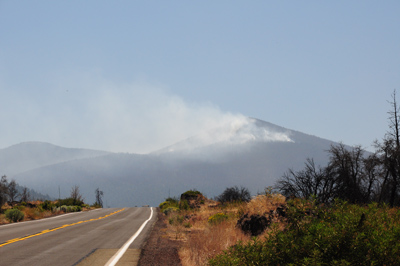 Cue the Marshall Tucker Band, because there are fires on several mountains. And since I took off on my Road Less Traveled roadtrip a week ago, I’ve been driving in wildfire smoke. Not constantly, mind you, as the vagaries of the inversion layer and prevailing winds have had me breathing Idaho smoke in Nevada, Oregon smoke in Idaho and California smoke in Oregon. But now I’m in Northern California where the greatest number of wildfires are still raging, and I think it’s all California smoke now. It’s the worst it’s been since the trip began. Which is ironic, because the wildfires that were blazing in some of the parks I wanted to visit have all been contained. But no sooner have crews gotten one fire under control than it seems two more spring up. The biggest of these are now the two fires in Mendocino County south of the county I’m now in.

Today, I was off to see evidence of when this area was really on fire. With the last great eruption in these parts — which surprisingly was only just in 1914. So I headed to Lassen Volcanic National Park, another one of the country’s least visited National Parks. I can see why it doesn’t usually get a lot of visitors. It’s way way out there. And most people get up to Shasta Lake and the Shasta-Trinity Range, hang out there to do their “recreating” and never venture further. But if you are a geology buff and especially a fan of volcanoes, Lassen Volcanic National Park is the place for you. 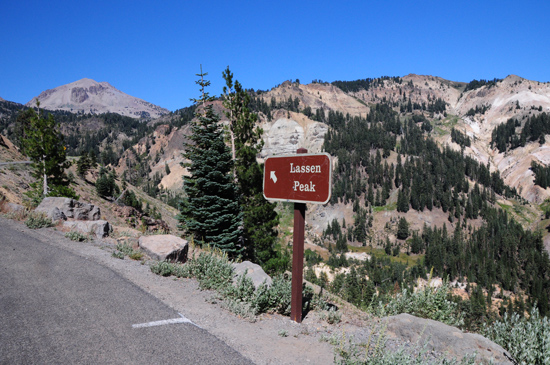 And that’s about all I can tell you. One issue with traveling with a terrier is that they are severely restricted in National Parks. Which means you also can’t take them into the museum where you find out all this stuff. So when you travel with a terrier, you just go to marvel at the view and the sites, then you look up the geology trivia later. You’ll also find that a terrier will restrict you from seeing some really neat things. At Lassen it was Bumpass Hell — a large collection of hydrothermal features including bubbling mudpots, thermal pools, fumerols and steam jets. (Don’t try to read anything into the name. It references a local explorer and guide who was severely burned after falling into one of the pools.) Dogs are not allowed on that trail — or on any trail. Since the temperatures up at 8,000 feet are only 53 degrees, I thought of leaving Lucy in the car. But the trail is three miles with a steep incline. At that altitude, I’d be moving slowly and I thought more than an hour was too long to leave her crated and in the car. 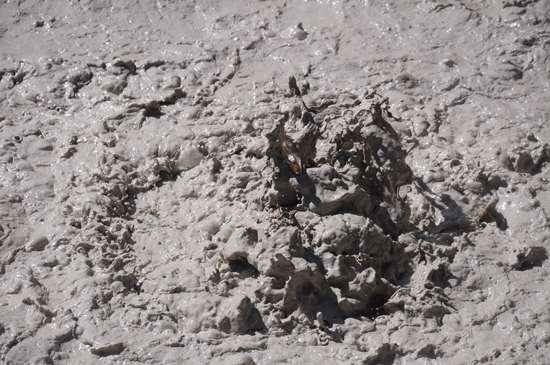 We had to content ourselves with looking at what bubbling mudpots we could see from the side of the road.

But terriers are useful in other ways. For instance, “the terrier” is, I believe, an international unit of measurement. So posing a terrier in front of something instantly gives a recognized scale. 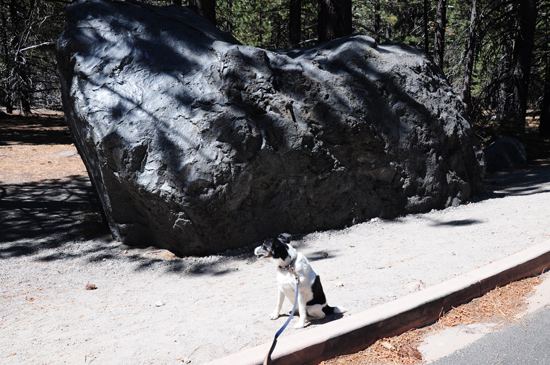 Here Lucy poses in front of “The Hot Rock”, a 300 ton rock that was thrown 4.5 miles when Lassen exploded in 1914. A photographer who documented the aftermath months later  noted that the rock was still hot.

Anyway, even without the educational benefits of the museum, we tried to concentrate on volcanoes. But the current wildfires kept intruding. First of all, the largest campground had been turned into a command post for the firefighting efforts that just extinguished the fires that had been burning in the park until just a few days ago. You never realize what a military operation firefighting is until you see all the mobile kitchen units and communication trailers, porta-potties and transportation vehicles it all takes. 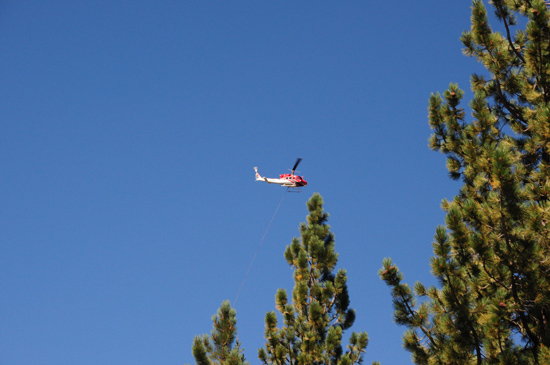 Not to mention all the firefighting helicopters that were pulling water out of the various lakes in the park and transporting to various fires. (You can probably just see the cable that holds the water bag.) 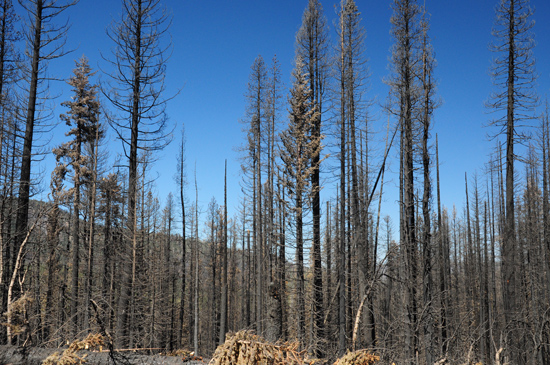 Not to mention the many swaths of burned forest from recent fires within the park.

But when we took the scenic park drive that winds you up and around Lassen Peak to nearly 10,000 feet that the extent of California’s burning really hit home. 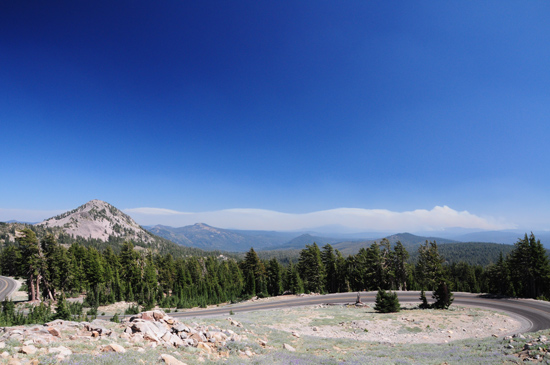 To the right are the two fires burning in Mendocino National Forest. And stretching to the left are the massive amounts of smoke they are generating.

But if Lassen Volcanic Park teaches us anything, it’s the resiliency of the Earth. For instance, little more than a hundred years ago, the top blew off the mountain and tons of rocks came roaring down the hill at 100 miles an hour. 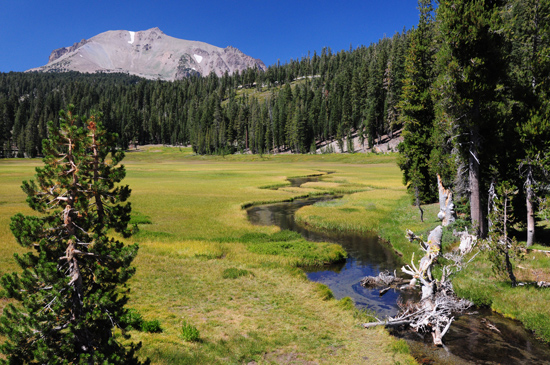 And look at it now!

Catch up with posts on the pre-planning here and here and Day One, Day Two, Day Three, Day Four, Day Five and Day Six. 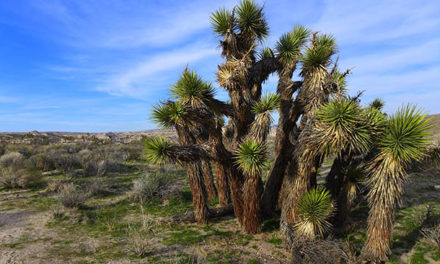 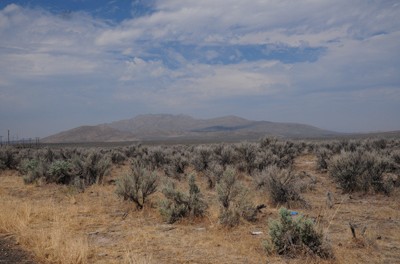