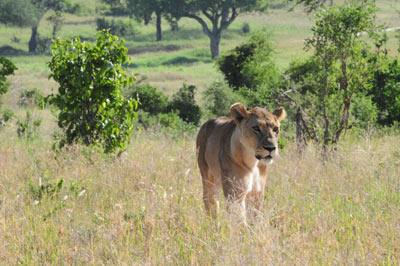 Having almost our fill of elephants, we headed out of Tarangire National Park to Ngorongoro Crater, Earth’s largest unbroken caldera and an area reputed to have the world’s highest density of carnivores. We were all hoping for lions, but we didn’t have to go far to find them. In fact, we hadn’t gotten out of Tarangire before we came upon two of them. They were both females, one of them was pregnant, one of them appeared to be a nursing mother and both of them were extremely emaciated. Our guide, Allen, said they were in big trouble and needed to find food fast. This was ironic, because on the other side of the park, we’d seen a huge troop of baboons feasting with a large herd of impala — both of which are preferred lion food. The poor lionesses really seemed tired and sick as they walked across the road mere feet from our cars and clicking cameras. They seemed too hot and stressed to think about the strange square animal in their path and all the clicking noises. But as oblivious and worn out as they seemed, you could still sense that they had the power to spring on anything that looked like food. Don’t mess with lions.

Here are some pictures of our lions: 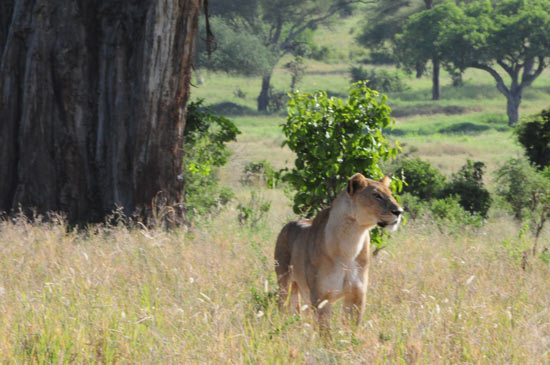 This lion appeared to be a nursing mother. 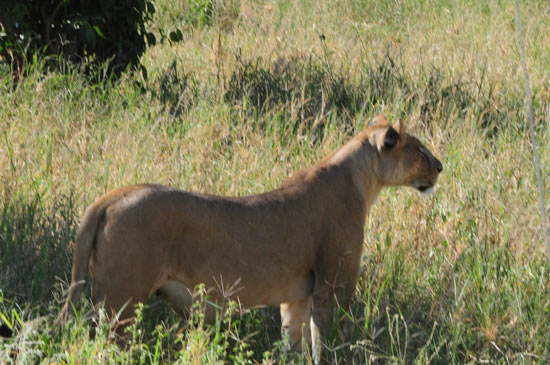 This lion was clearly pregnant. 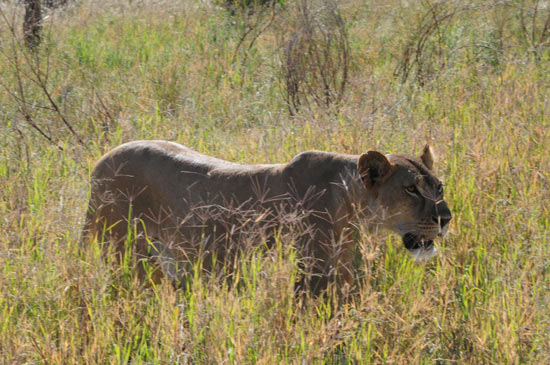 They were both shockingly thin and exhausted looking. 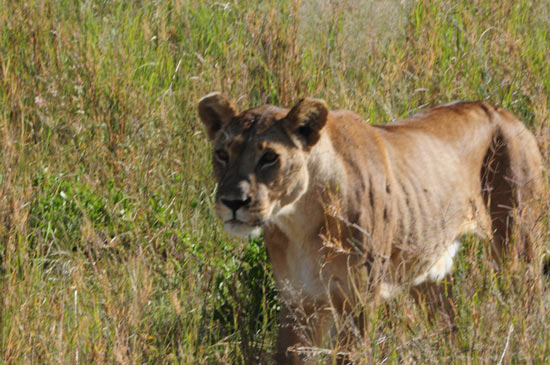 We had another odd lion-type encounter later in the day when we stopped at a village. We were immediately swarmed by a group of extremely aggressive panhandlers and trinket merchants. They were not supposed to be on the grounds of the village, but they saw my mother coming a mile away as an easy mark. They were grabbing at her and even when Allan, our guide pushed them away and hustled her on the Land Rover, they continued pounding on the window and scaring her. I should note that Allan is a full-blooded Maasai, although he doesn’t have that long lean look that the more traditional tribesmen have. (He says it’s town living and too many burgers.) But there must be some latent Maasai warrior genes still in him. Because he suddenly leaped out of the Land Rover with tire iron in hand and chased the beggers away yelling what sounded like Maasai war whoops.

I guess you can take the Maasai off the veldt, but you can’t take the warrior out of the Maasai. These are a warrior tribe who traditionally used to have to kill a lion with a spear to be initiated into manhood. I suspect Allan could have gotten his with that tire iron. So don’t mess with the Maasai. Or with lions.

The Maasai have no traditional religion.

The Maasai tradition is that all the cows in the world belong to them. They used to steal cattle from other tribes, which they didn’t see as stealing but reclaiming what was rightfully theirs.

The Maasai wear unique sandals that have no difference between toe and heel. This is to confuse pursuers and make them hard to track when they are out taking back those cows. 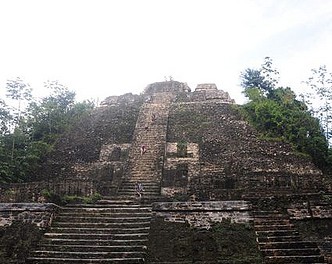