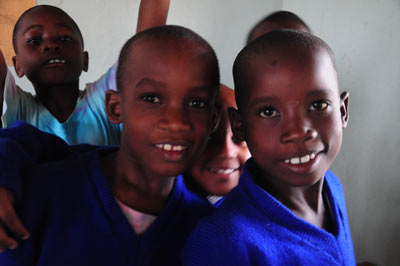 One of the things this tour has attempted to do — other than shuttling us out on game drives and between luxury safari camps — has been to put us in touch with the Tanzanian people. Many people here are still uncomfortable having their pictures taken or have started demanding “one click, one dollar”. The goal of these “cultural visits” is to create situations where we can make a general compensation as a group for services such as a mini tour of a traditional village, with a byproduct that there is a more natural and respectful opportunity to talk, interact and photograph. The major motivation — by the Tanzanians who are organizing these programs — is to create situations where some of our tourist dollars go directly to people who really need them in a way that doesn’t foster negative behavior such as begging and “cash for pictures” scams on the side of the road (which often lure kids from their schools). This worked really well when we visited a Maasai village. Today was to offer two more of those opportunities.

After a morning game drive, we were to visit a school that serves several villages. We weren’t sure what the program entailed other than a tour. The night before our visit, our tour guide, Allan, informed us that the children would sing for us. AND that we needed to prepare two songs to sing to the children. We hastily convened our choir and our lyric cheat sheets and practiced God Bless America and Take Me Out to the Ball Game. 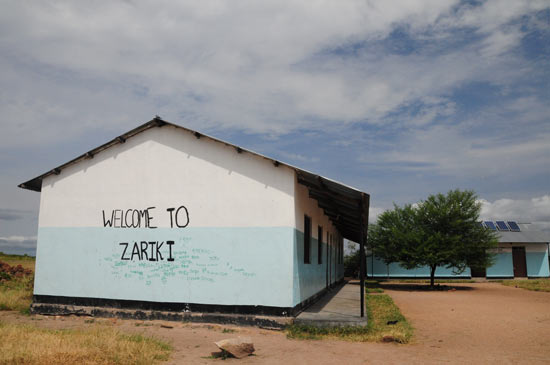 We arrived to find the Zariki School to be two buildings housing three classrooms, an administrative office and far across the playing fields, a row of outhouses.

It was spartan, but the staff was justifiably proud. In a country where parents must pay for primary and secondary education, this school is run as a cooperative. The villages pool their money for the school and all children who want to attend are welcome, regardless of whether they can pay. The school is also attempting to provide school uniforms for those who cannot afford them and breakfast and lunch for children who need it. Their teacher, Amos, then explained that the children are taught all subjects in English and also learn math, reading, sports and personal development. We walked into a classroom bare of anything but desks and a chalkboard and met a group of shy elementary school kids. Or perhaps they weren’t shy. Maybe they just had better classroom manners than I’m used to seeing. 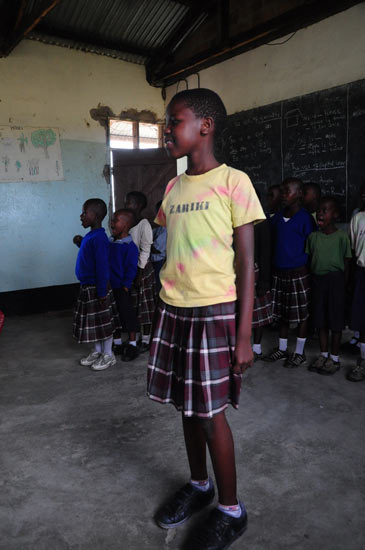 A bright little girl named Sabrina led her classmates to the front of the room and started the songs.

Now it was our turn. I was worried that God Bless America was too jingoistic. I would have preferred Woodie Guthrie’s This Land is Your Land. But we acquitted ourselves well and I think the kids probably didn’t catch too many words other than “America”. We really hit our stride with Take Me Out to the Ballgame. Especially when we began shouting “ONE. TWO. THREE STRIKES, YOU’RE OUT” complete with hand signals. Now it was time to mingle with the kids and ask them questions.

They still seemed shy, so I started taking pictures of the kids and showing them their likenesses in the view finder. This caused such hilarity that the kids begged me to let them make funny faces and take more pictures. Next I had them take pictures of me. By then the ice was completely broken. 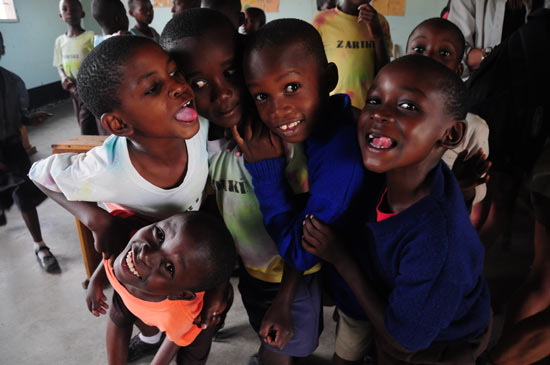 You can get a lot of funny faces in a viewfinder. 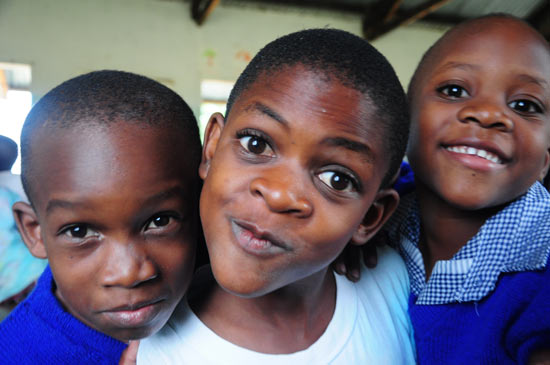 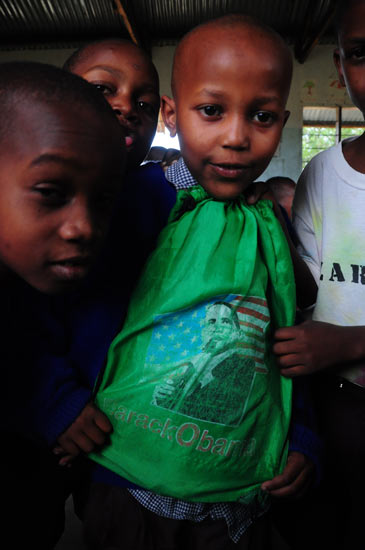 Amazingly, Tanzanian eight-year-olds had no problem identifying one of the few Democrats in the group. 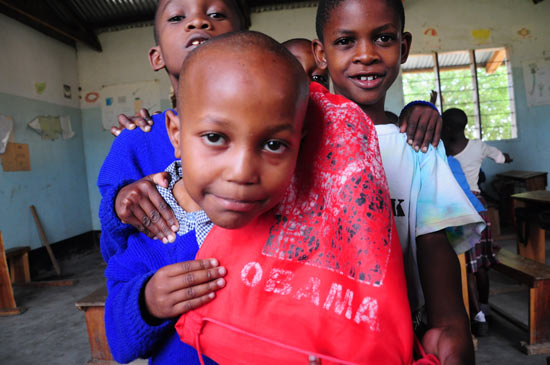 They knew I, of all their White visitors, would especially appreciate their Barack Obama satchels. 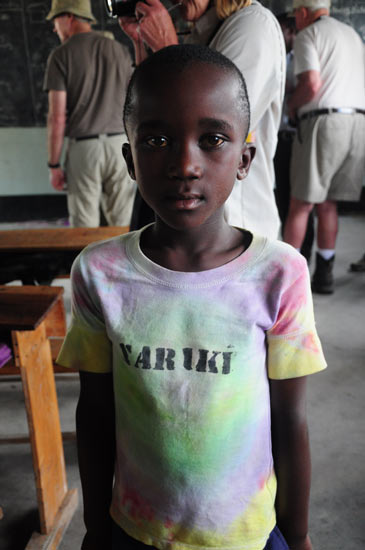 Although one solemn little boy asked for a “real” picture, then posed with the gravity he seemed to feel the occasion warranted.

We’d been told that, if we liked, we could bring some presents for the kids — things such as school supplies. We would be presenting those to the teachers who would use them throughout the year as motivational rewards for attendance and good grades. For weeks in San Francisco, I agonized over what to bring. I didn’t want to import cheap crap, so I tried to think of things made in America that would represent something positive about our culture. I finally visited my neighborhood gift shop and picked up colored pencils, erasers and sharpeners. I supplemented that with two sets of tiger eye marbles and a 100 blank cards, illustrated by a Native American artist featuring the animals and plants of the American West. At the last minute, I grabbed a dozen bandanas thinking they would be “Cowboy”. However, the pack included a rainbow of colors, so they were a little more Castro than Cowboy. Most of the other people on our tour thought along the same lines. As we moved to the administrative office and began giving our gifts to the teachers, Amos, the head teacher said with tears in his eyes, “This is so much. So much.”

Our next cultural exchange was to be a tour of a tribal fishing village. Local villagers would serve as guides and tell us about their work, region and their way of life. Our payment for the tour was supposed to go in a communal fund to help with village projects. From the moment we arrived, everything felt wrong. It wasn’t just that the village was desperately poor, but we only had one guide and the locals we could see fifty yards away tending their boats didn’t seem very excited to see us. After an introductory talk, our one guide led us straggling through the village not really keeping us together or having us focus on anything in particular. It also became clear as we got further into the village that these White strangers with our REI hats and expensive cameras weren’t particularly welcome. 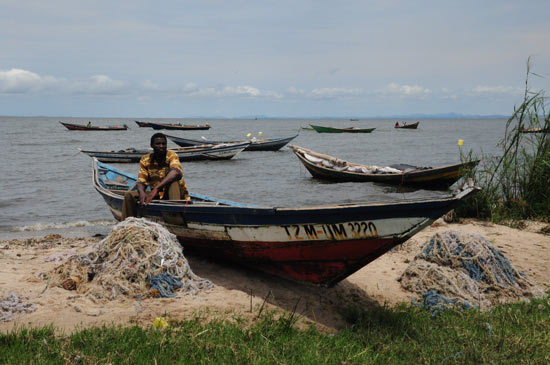 The fishing village was on the edge of Lake Victoria, the second largest fresh water lake in the world and the source of the Nile. 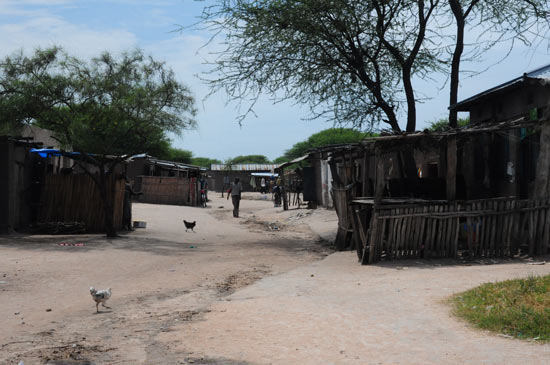 As we walked down the commercial strip of the village, locals faded back into their houses. 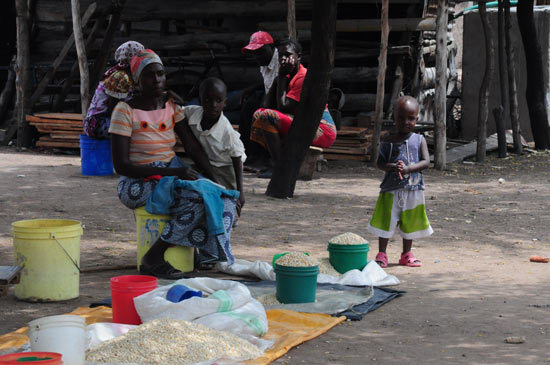 Or looked at us with hostility and signaled that we should not take their pictures.

We especially felt the anger and resentment from the younger men of the village. One of our party, who had ignored the suggestion of our tour director to dress modestly, was subjected to in your face anger from some village women. There was discomfort on both sides. We were left wondering if the whole village had agreed to this program or if any of the benefits of it reached just a few.

One of my favorite fellow group members turned to me, as we walked back to the Land Rovers through the stench of rotting fish and the sight of grinding poverty, and said, “My god, we forget we have so much.” So much. So much.

I’m not sure our visit to the fishing village brought much to the village. I hope it added to our own “personal development”. 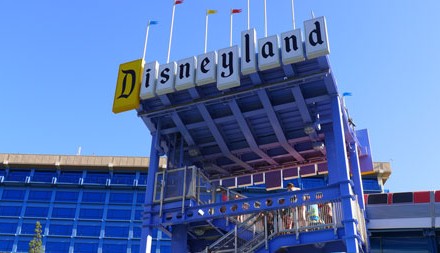 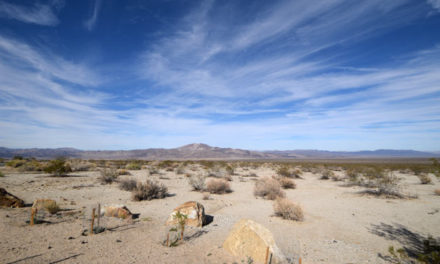