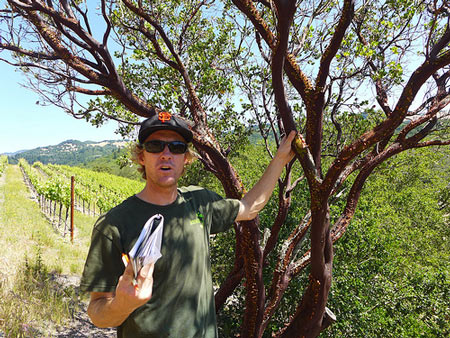 I don’t care when Arbor Day shows up on your calendar. In Sonoma, it’s some day right around Daylight Savings Time in Fall. Because Arbor Day here at Two Terrier Ranch is when we turn our attention to taking care of trees. Unfortunately, this year, we had a lot of trees to address due to the unfortunate actions of an employee who turned out to be on meth — and who needless to say, is no longer with us. (That, of course is a whole other story.) Apparently, during one week on what must have been an epic binge several months ago, Tweaky McTweakerson decided to trim trees. With a chainsaw. Very, very badly. Just to put in perspective the massive environmental damage large logging concerns can wreck on the environment, you should see what one fool-ass tweaker with a chain saw can do in just one week! To cut a long and unfortunate history short, now that we are on the cusp of what we hope is our rainy season, it was time to do some “Tree-Age” (pun intended) and see how much of McTweakerson’s damage we could reverse. 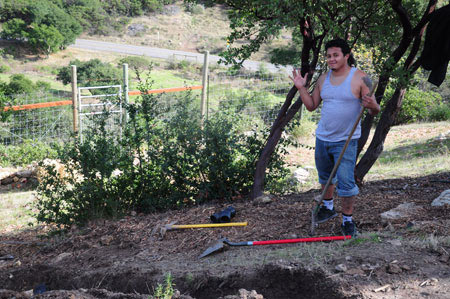 It’s always good form to have a Native American from a local tribe help out on projects that aid native plants. Thanks Pat!

We had two arborists set to lead the mission. To fortify their efforts, our Ranch Manager, Louis, brought in important reinforcements. Among them was Pat who happens to be a Pomo Indian and whose native name means Acorn. I thought that was a good omen for a tree mission, especially one aimed at helping some of our native oaks. I thought it also couldn’t hurt that one of our arborists (seen above) is named Deva after a superhuman being in traditional Buddhist cosmology. So with our Pomo, Buddhist, and ace crew mojo intact, we set out to save some trees. Much was accomplished in one day. Actually much more than I thought we’d get through. Some of the news was good. Some of the news was bad. But we learned a lot and I suppose that’s sometimes the best you can hope for. The prognosis was actually pretty good considering what we were up against — not just McTweakerson’s foolishness, but several years of drought which have exploded the oak moth population, the county-wide infestation of the olive fruit fly, and some collateral damage caused by large trucks attending to some construction we’re doing.

In the interest of sharing that knowledge, here are the main things we learned:

1. The arborists concluded that about ninety percent of what ailed our trees was the result of bad pruning. Apparently, this is not uncommon. So if you aren’t absolutely sure what you are doing, call in a professional arborist. And if you are a fool-ass tweaker, put down the chain saw and get the hell away from the trees.

2. Obviously, correct pruning is different for every tree species. But if you are dealing with native California oaks, do not under any circumstances, “limb up” the lower branches in an attempt to create a high crowned oak such as one you might find in England. California oaks grow in their distinctive bell shape for a reason. For one, the drooping branches protect the bark on the trunk from burning in the harsh California sun. And secondly, California oaks like to put out their strongest heaviest limbs close to the ground. So if you keep limbing off these lower branches, you’ll be left with a tree full of spindly branches on a scorched trunk. Just don’t do it. 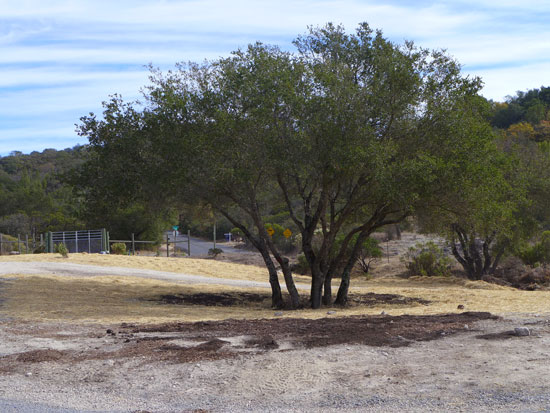 3. Sudden Oak Death Syndrome. It’s devastating whole great swaths of oaks to the south of here in Marin County. We were afraid one of our sickest oaks was falling victim. First Deva told us the bad news. SOD spores are everywhere. As he put it, “You’ve got them on you right now, I’ve got them on me, they are probably on every tree in the place.” Now the good news: just because the spores land on a tree doesn’t mean the tree has received a death sentence. In fact, the chances are good that the tree won’t even become infected. The disease can only take hold on a stressed tree. (So don’t stress your trees.) The spores also like moist conditions to really spread. So in our very hot section of Sonoma Valley, it’s a lot harder for SOD to take hold. So needless to say, keep it that way. And don’t, for any reason, irrigate on around or near a native California oak out of natural rainy season. If you do, you’ve just created a great SOD environment. (Luckily this was not one of our issues.)

4. Here’s how to give stressed trees a chance. Deva and the crews slightly fractured the soil around the trees roots (and very gently and carefully to avoid piercing a root.) Then they spread a nice “donut” of extra nutrient rich compost. Next we’ll cover that with mulch to hold it in place. And when Mother Nature sees fit to give us some rain, voilá, instant vitamin drip. And by the way, that’s why this work needs to be done on the cusp of the rainy season. If you do it out of season, the compost just dries up and blows away. Unless you wet it all down with a hose. And we’ve just talked about how that’s a no-no out of season. 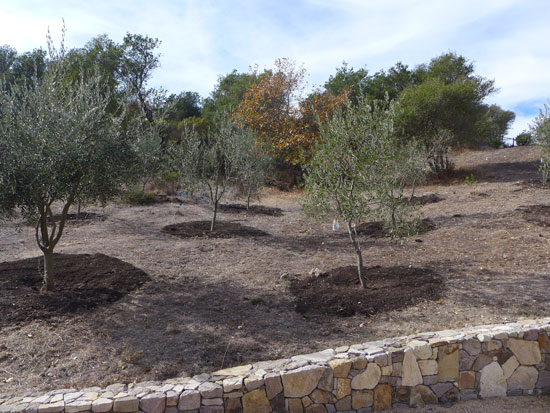 One of our olive groves where the trees have been judiciously trimmed, treated with compost, and the irrigation verified and repaired. Ready to THRIVE.

5. Olive trees are tough as old boots. Native California oaks are delicate divas. So if you are going to abuse a tree, do it to an olive.

Deva has high hopes that our “tree-age” will have our olives springing back to health in no time despite the McTweakerson chain saw pruning they received. The poor oaks, not so much. Once the lower limbs have been taken off, well, they are gone. And our sickest oak, while it doesn’t seem to have SOD, doesn’t look like it’s going to make it. Apparently, when various areas were graded around it, for roads and driveways, its roots were compacted on three sides. Luckily we have our little oak nursery where we have been nurturing baby oaks.

Sometimes, unfortunately, all you can do is pin your hopes on the next generation. And keep tweakers away from your trees. Don’t worry, we won’t let that happen again. We’ve got a line of defense. 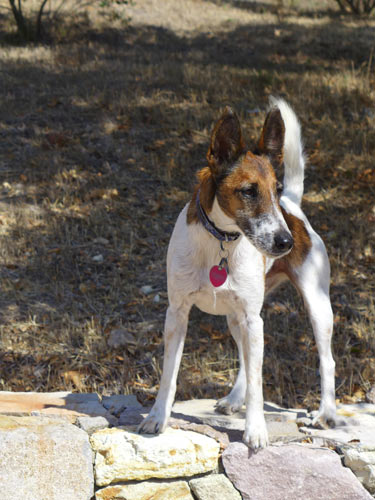 “You want me on that wall. YOU NEED ME ON THAT WALL!”

(And hey, I made through Day Two of NaBloPoMo!) 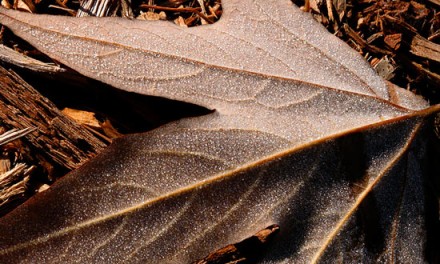