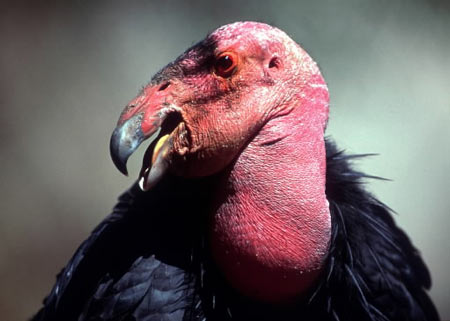 I’ve had pretty good success with my local San Jose Meetup.com hiking group. It’s gotten me out to all sorts of interesting hikes in the hills and mountains around the South Bay. Most importantly, it’s gotten me back safely — which is not something that has seemed likely any time I’ve tried to do a hike on my own. In both my solo forays — once on Mount Tam and once in the Coyote Hills — I got myself so hopelessly lost that it was only when the sun started setting, and I could orient myself east to west, that I was able to stumble back to my starting point. Resolution: since I have an abysmal sense of direction, I can never hike alone. Since Andy hates hiking, I have to find groups. So I was excited to find another Meetup.com group whose hikes were much further afield than my regular group. In fact, this group was going to a hike in a place I’ve always sped by on my way to Monterey and points south, but have never made the detour to visit. That place is the weird and wonderful Pinnacles National Park — home to one of the larger populations of the severely endangered California Condor. 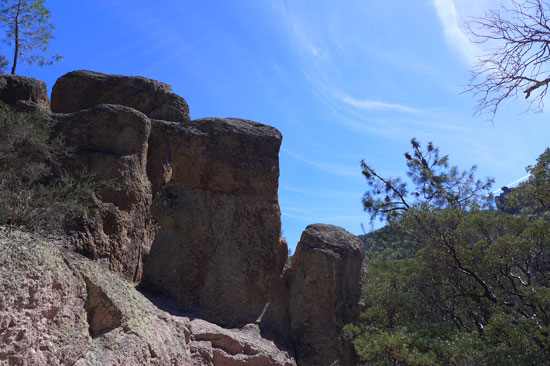 The Pinnacles is named for the weird rock formations that are formed from an extinct volcano and various earthquake actions.

As you can see from the picture at the top of the post, the California Condor is pretty hideous up close. But in the air, it’s magnificent. A condor’s wingspan approaches nine and a half feet, it can soar and glide at up to 55 miles per hour, and is sometimes mistaken for a small airplane. Besides eating dead things, the condor loves empty spaces with lots of thermals and abundant rocky crags to nest in. That makes The Pinnacles, with its weird and spiky rock formations, thrust up by volcanic and earthquake action, very attractive to them. Besides being North America’s largest land bird, the California Condor is one of the world’s rarest bird species. As of May 2013, population counts put the number of known condors at 435, including 237 living in the wild and 198 in captivity. There are 27 free flying condors in Pinnacles National Park. I was convinced I’d see one.

First though, I had to get to the hike, which is often as problematic for me as getting myself through a hike. I gave myself an extra hour to get down to the Pinnacles, which is surprisingly only an hour and a half from San Jose. It took me more than two hours to get there as my GPS seemed to think I really wanted to go to Soledad Prison, birthplace of the infamous Norteños gang. But I pulled into the meeting place just in time, only to realize, since I’d never hiked with this group, I had no idea who I was meeting. I ran to the nearest clumped group of people near the sketchily outlined meeting place of “near the Visitors’ Center”.

I ask a stoner looking dude, “Is this the Meetup group?”

So I followed the herd on to the park shuttle bus that took us to another area of the park. Once the bus unloaded, what I thought was a group quickly dispersed.

“Hey,” I said to Stoner Dude, “Are we the only ones showing up for the Meetup hike? You are in the Meetup.com group?”

Well, I was there and I was damn sure going to see a condor. However, not wanting to die trying, I popped into the Ranger Station to make sure they could direct me to a well marked trail where I wouldn’t eventually find myself becoming condor food. 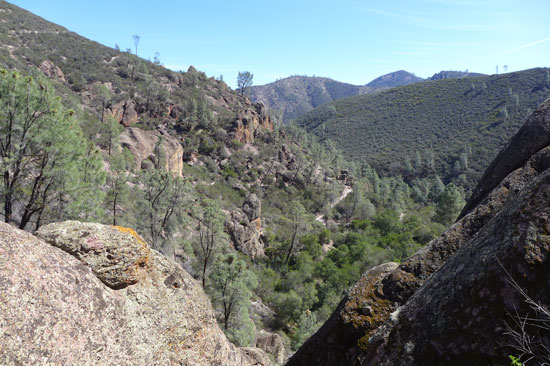 Here’s the view two miles up the trail and overlooking Condor Gulch. I was sure one of those suckers would fly up at any moment.

I chose the High Peaks trial that leads to the Condor Gulch Overlook. That sounded promising. What wasn’t promising was the fact that it was already near 2PM, the temperature had soared to 90 degrees, and the exposed trail went straight up. I trudged up the peak convinced, even though I could see the Bear Gulch Ranger Station from most points on the trail, that I was still in danger of becoming condor food. 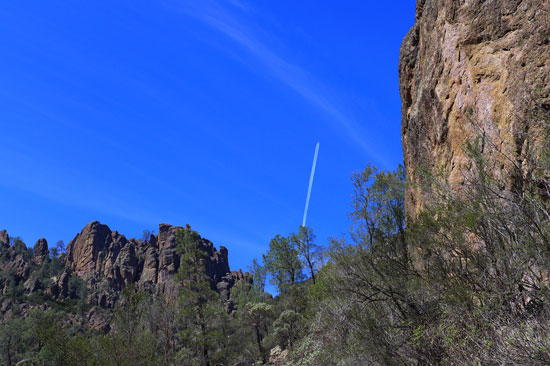 Oh oh! Is that one? Wait, note to self, condors don’t leave vapor trails.

Well, long story short: I made it up to the Condor Gulch Overlook, hung around scanning the skies for half an hour, then wended my way back down as my water gave out. No, I didn’t see a condor. But let’s not call Operation Condor a failure. Let’s relabel it a reconnaissance mission. I’ll be back to the Pinnacles — earlier, better prepared and ready to see those big birds. 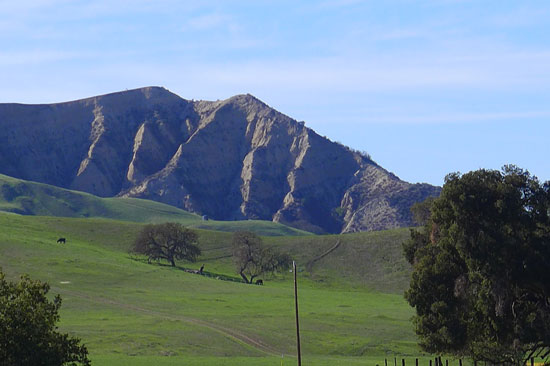 I should mention that most roads to Pinnacles are wonderfully scenic, with lots of cattle and foldy mountains.

If you see any of the friendly rangers giving rock talks at the shuttle stops, stop and have a listen. I found out that most of the rocks of the High Peaks are Rhyolitic breccia which is composed of lava sand, ash, and angular chunks of rock that were explosively ejected from the Pinnacles Volcano.

Although frequent readers know that I always brake for tourist traps, I found the many garlic-oriented places around Gilroy sadly substandard when measured against my usual standard for good roadside attractions. Sure they were stuffed with garlic products, in homage to Gilroy’s declared status as The Garlic Capitol of the World, there were very few locally made products and almost no fresh produce.