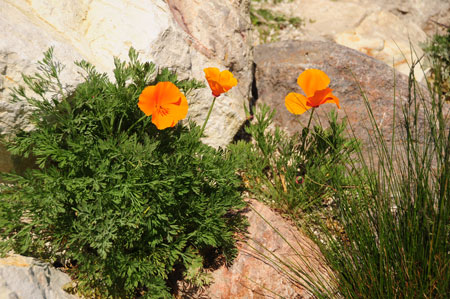 We were warned that our persistent drought was going to give us one of the worst wildflower blooms in years. But the little rain that we had late in the season, while not enough to make a dent in the drought, was enough to give us wildflowers. Not our usual spectacular bloom, but a respectable one considering. In my hikes around the San Jose area and up at Two Terrier Vineyards, the flowers are out. What we have especially are Poppies. But I’m beginning to think that, barring nuclear winter, Poppies are always going to come through. I do hope all my readers who live or have been to California are familiar with Eschscholzia californica. If you drive along California roadways any time between as early as February and as late as August, depending on the rains, you should have seen it. If you are the type who only looks at road signs, you’ll at least have seen an artist’s rendering of it on the signs for any scenic drive to commemorate that it is our state flower. Where you probably haven’t seen the California Poppy is in a garden. As near as I can figure, there are two reasons for this:

And I mean ALL landscape architects and garden designers — even the ones who claim they only landscape with California native plants. I base this on interviewing many of them, hiring two, and firing two. Every one of them, when I mentioned my belief that — when in California — you can’t have too many poppies, tried desperately to talk me out of them. One even told me the big, fat whopper that “California poppies are invasive”. Which is the biggest load of compost. Nothing native is invasive in its proper ecosystem — precisely because it is a natural part of that ecosystem. It has evolved with other flora and fauna that depend on it, feed it, feed on it and keep it in check. Sure, take Eschscholzia californica out of California and throw it somewhere without its usual cohort and it will go wild. (Apparently this is happening in parts of Australia.) But in California, Eschscholzia californica knows its place. In a very broad sense.

2. California Poppies play by their own rules.

I suspect this is what really drives landscape architects and garden designers crazy. California Poppies will figure out their place on their own, thank you very much, and it’s not necessarily where you want to put them. Carefully plant poppy seeds in a certain bed and they will come up ten yards from where you planted them. Spread them out in a wide circle and they’ll all come up in one tight clump somewhere off to the left of where you sowed them. Or they might not come up at all the year you plant them. But then, the next year, they’ll be all over the place. Except, of course, where you planted them.

If you can predict anything about California Poppies, it’s that they will come up in the least likely place, usually in the worst soil or on the side of a road that gets the worst spray of gravel and dirt. California Poppy don’t care. Here’s one amazing example: We were doing some construction in an area of the property that has suffered the most disturbance. It wasn’t an area that had much topsoil to begin with, especially after the previous land owner trucked off what little there was and sold it. Our construction further disturbed the soil, bringing up the middle alkaline layer that had virtually no vegetable matter in it. In addition, it was on the exposed South slope, which made it perfect for our solar panels, but also hot as a skillet. Our landscape gardener insisted, to my disbelief, that nothing would ever grow in that area. She brought in a soils expert whose analysis came back saying, basically, this was the most arid land on the face of the earth and unfit for life as we know it. I’m not entirely convinced that the two weren’t in cahoots, because the proposed solution was to truck in tons of expensive garden soil. My solution was to get rid of the landscape gardener and let Ranch Manager Louis effect his plan to spread handfuls of Poppy seeds like a native Johnny Appleseed. 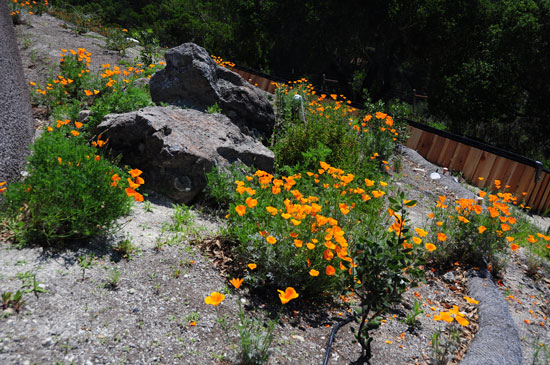 And look, Folks! Poppies! Loads and loads of healthy, happy Poppies. We never even watered this area.

Yes, we love California Poppies around here. And I’m always surprised to find that not everyone does. Seems most of the people who are outside The Poppy Appreciation Society are transplants from the East who still can’t get it through their thick skulls that California is NOT Kentucky. It does NOT rain in the summer, you should not have a Bluegrass lawn here, and, fergawdsake, keep your water-intensive non-Native flower gardens OUT OF HERE. When I go by some overly manicured, heavily watered garden filled with tropical flowers and big showy water-hogging blossoms, I can’t understand why everyone doesn’t see how very wrong it looks. An East Coast plant in a California setting looks like a big blowsy saloon girl with too much make-up and too many petticoats. By contrast, our native flowers, while no less colorful, are lean, tough, and full of ‘tude — like cowgirls. They don’t have to be big and showy. Contrasted with our golden grass in its summer dormancy, California wildflowers are small, intense spots of color.

I submit to you: 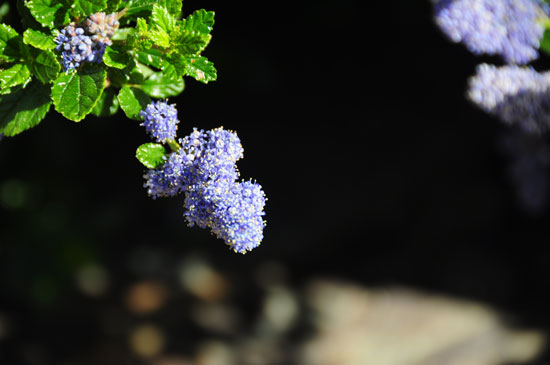 Ceanothus! These grow as tall, nearly tree-sized bushes, or small shrubs. They come in many colors but mostly this almost electric blue. 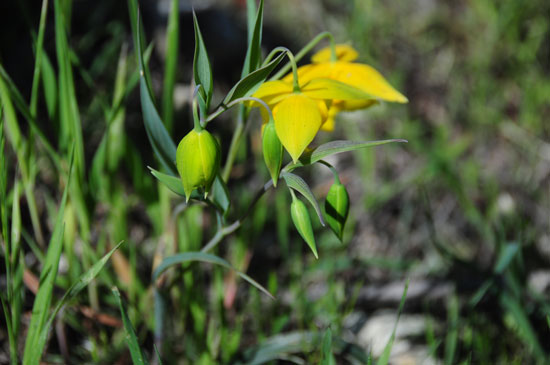 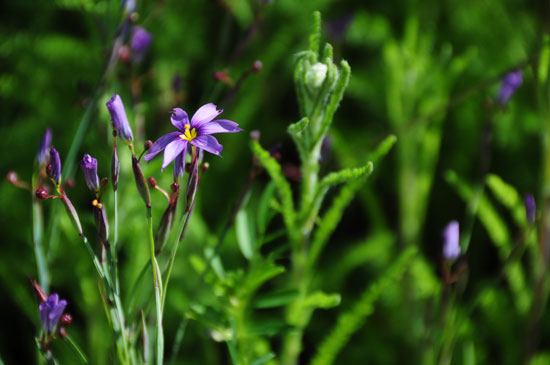 Blue Eyed Grass. These always look as if they are winking. 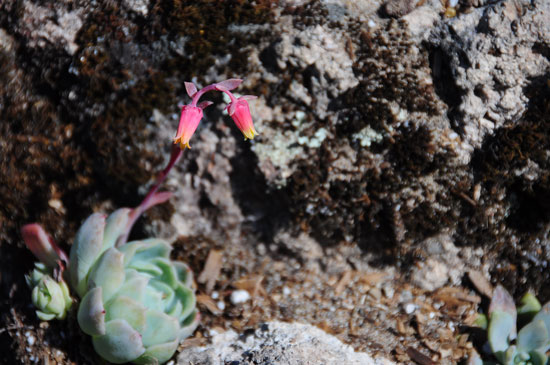 Succulent in the Agave family. Succulents on rocks and stairs have sort of become Ranch Manager Louis and DJ’s landscaping signature. 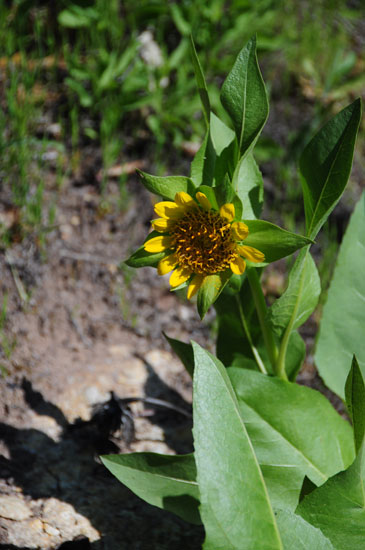 Mule Ears. These guys are especially tough. Even the deer leave them alone. 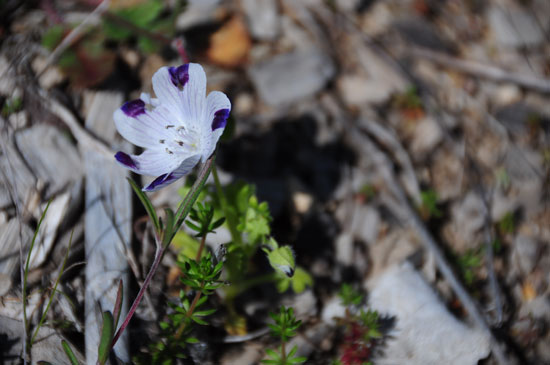 Five spot. This is one of the most delicate of the natives we have. But they are still coming up in bunches, unirrigated after three years of record drought. 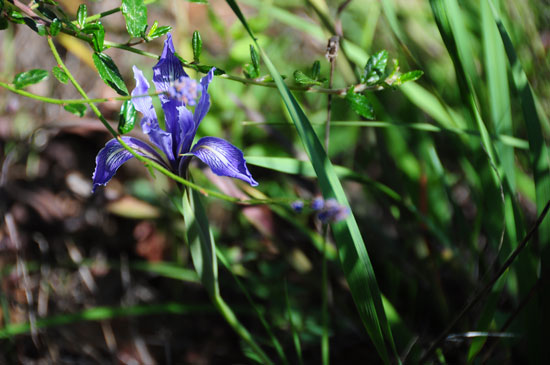 Native Iris. Another one that blooms in profusion at the end of the rainy season and before the full heat of summer.

Some of these flowers bloom just in the months after the rains, then put their heads down to wait out the long, hot summer. Some  of them — like Poppies — keep smiling through the blazing sun until almost fall. Others will come up later. Still more prefer to put out color in the winter. In fact, California is one of the few places that has year round native blooms. Now who would trade these gunslingers for insipid Pansies? And, you know what? We even have green. A green more intense than any landscape I’ve seen except in Ireland. It’s called Winter or rainy season here.

The great novelist, essayist and conservationist, Wallace Stegner, felt similarly. In his essay, “Thoughts in a Dry Land” he warned people to let The West be The West:

What I think Momaday is saying is that you can only appreciate and love the beauty of The West when you stop looking at it through the lens of places with more rain and less grandeur. Many people, especially many garden designers and landscape architects, just can’t make that leap. This is the Wild West, Honey, and Western plants can’t be shoehorned into beds and “designed”. Western natives do what they please. Well, they do listen to Ranch Manager Louis, maybe because he lets them do their thing. He broadcasts seeds and he plants native shrubs. The shrubs generally stay where they are put — although when not irrigated, they grow on their own schedule. In dry years, they stay small, then a wet year comes and they throw out three years of growth in one season. Louis is okay with that. But try to water native shrubs, especially out of season and they go all leggy and weak and flop over. Louis never does this. He throws out seeds and, at least for him, the wildflowers come up in that general area — but in unexpected patterns. And to my eyes, in this landscape, they look so much more beautiful than a boring straight row of Petunias. It’s landscaping by nature and the random swaths of flowers are part of the design. Accept that you will not be the designer. 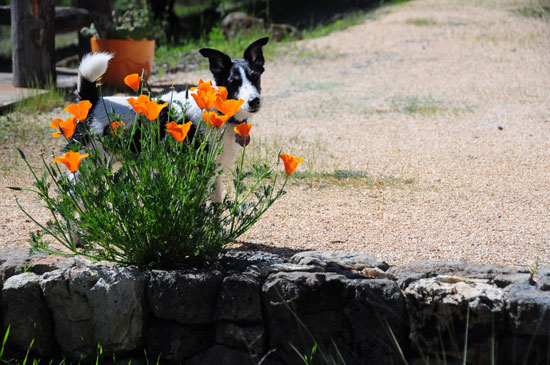 Yup. Out here, we’re letting the West be as wild as it wants to be. And we are planting as many Poppies as we can. And they will come up where they damn well please. 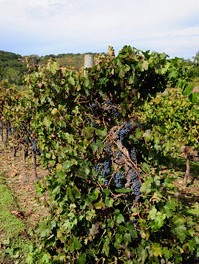