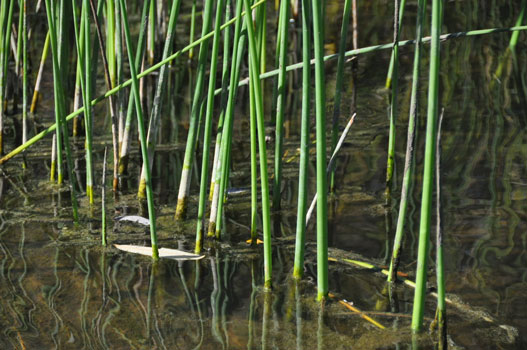 Habitat restoration is tough. It’s basically playing at being Mother Nature. Except it’s very hard to do it as well as Mother Nature. Plantings made with the best intentions can have unintended consequences. Take our pond, the one we named after our late lamented founding terrier, Charlie. Lake Charles is a man-made pond with a recirculating waterfall that we built into a natural depression on the barn side of the property. The goal, in this semi-arid climate, was to duplicate the role of a waterhole on the Serengeti. When all other water sources dry to a trickle, our little pond would become a meeting place for thirsty animals. And, it’s worked beautifully. Deer, birds, insects, even our Mountain Lion and the coyotes show up for a drink, especially just about this time of year when Sonoma is parched. 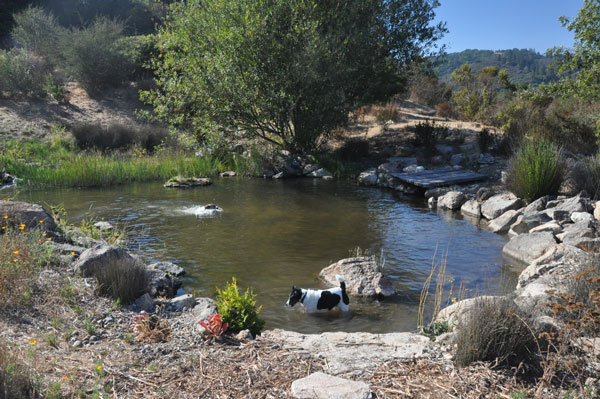 Our local animals don’t even seem to mind the presence of not-exactly-native terriers splashing and barking in Lake Charles.

I was also hoping the pond would serve another purpose. So many lakes, ponds and streams in California have been invaded by non-native plants and animals that are crowding out and even our killing our native flora and fauna. I wanted Lake Charles to be a safe haven for native species. That plan was first derailed when a landscaper, who I no longer employ for reasons that will become painfully obvious, planted a load of Water Hyacinth in the pond. In case you don’t know, Water Hyacinth is one of the most rapidly invasive and destructive aquatic plants around. It will multiply and choke out a waterway almost within a year. Napa County spent millions eradicating it from the Napa River where it was slowing the river flow and strangling the native plants. If there were a Ten Most Wanted List for invasive, destructive plants, Water Hyacinth would be Public Enemy Number One. This South American native is such a problem in China that the government is rounding up whole villages and redirecting them to choked-out waterways to haul out the nasty plant (which the thrifty Chinese are now recycling as pig fodder). Surprisingly, Water Hyacinth is widely available in garden stores for people to put in their ornamental ponds. DON’T DO IT! Especially if your pond is anywhere near a native waterway. You could let loose an agent of destruction.

It was a long and dirty job, but the guys finally pulled out all that Water Hyacinth. Next thing you know, the native plants started moving in, along with some threatened California animals like the Chorus Frog and our Western Pond Turtles. So far, so good. But we just couldn’t resist tinkering. Near one end of the pond is a natural seep which keeps the bank soggy. One of the guys had the brainstorm to plant something that is known as a “land builder”, that is a plant that, because of the way it grows in marshy areas, holds in dirt and builds up banks. The plant chosen was a native variety of Scirpus californicus. This reedlike plant is a sedge, also called the California Bullrush or Tule Plant. Native Americans in California used it for food and for weaving baskets, homes, and hats. What’s not to like?

Well, apparently, this particular Scirpus is usually found in more brackish areas. So when it was put in our little freshwater pond, it went nuts. Although it’s supposed to be tasty to many different animals, the deer didn’t seem to be eating much of it. They preferred to wait until Ranch Manager Louis did his plantings, then they’d chomp on those. (Which is why he refers to them as “asshole deer”.) Anyway, before we knew it, we had Scirpus marching up our waterfall and choking it down to a trickle. Back in that marshy area, the Scirpus was doing just what we wanted it to, building up soil. But it was building up too much land in other areas, making our pond smaller and smaller.

So a valuable lesson: Just because something is a native doesn’t mean it will necessarily behave itself in every situation. Or I should say, it was a valuable lesson to me. Ranch Manager Louis said he had reservations about Scirpus from the beginning but was overruled. In the end, Jesus and Frederico were deployed to pull out the Scirpus from everywhere but the marshy bank where it’s doing its job. 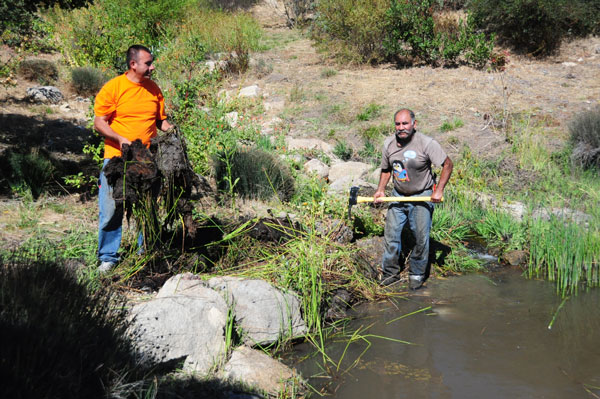 If you don’t understand what I mean by a “land builder plant” just look at the root clods on the Scirpus Jesus is holding! 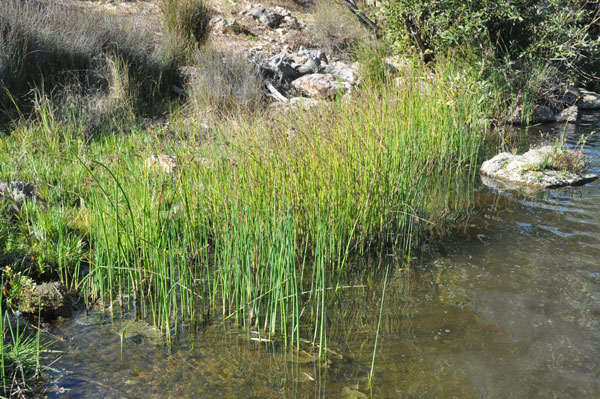 We’ll keep the Scirpus in this section of the pond, where we can see it’s a good safe hiding place for small fish and frogs.

I guess we’ll just have to keep an eye on this stuff to make sure it doesn’t overspread again. So what are we putting in its place? Because one thing that’s important at water holes is to make sure small animals and birds don’t have to come out into the open to drink, where they might get picked off by predators. After all, Lake Charles is supposed to be a sanctuary. The answer is native Monkey Flower. It’s tall and leafy enough to offer protection, but it isn’t a land builder. 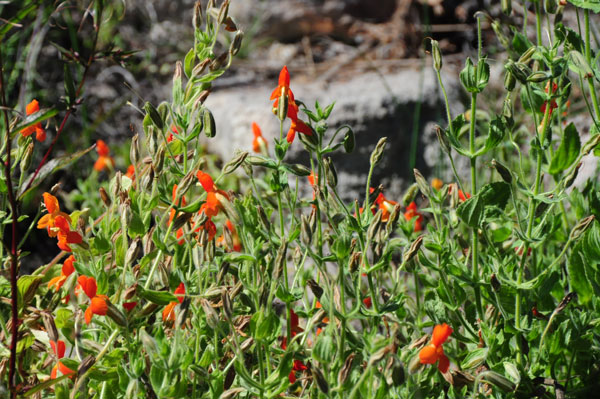 It also gives us a lot of brightly colored flowers all summer long. 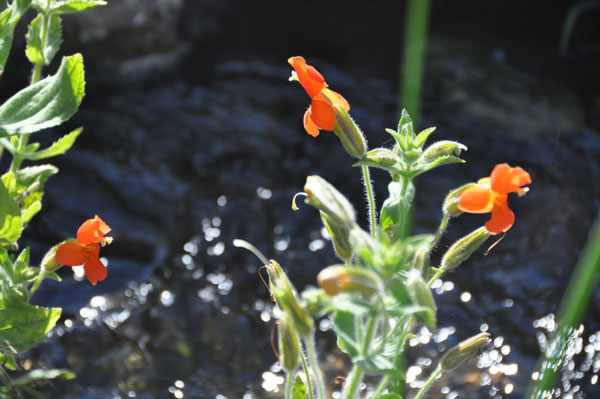 We’ll put up with a lot of plant spreading if we get flowers.

The moral of the story: always plant natives. But be sure you are planting them where they should go. Keep an eye on them and make sure they play nicely with everything else. Mother Nature will keep the balance. But if you start to take on her role, you need to be mindful of that balance as well. 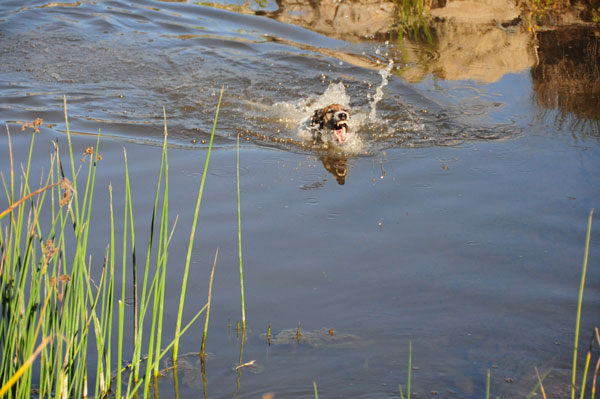 If we could only harness terrier power to control Scirpus. 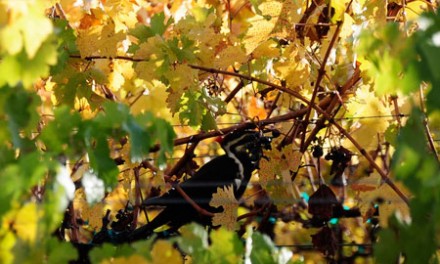 The 12 Days of Two Terrier Christmas