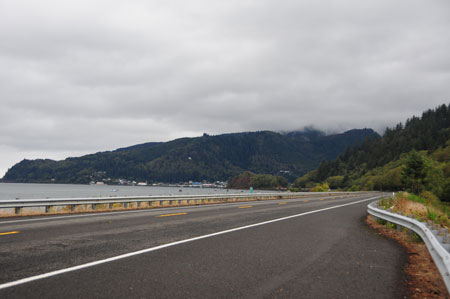 If you’ve been following along, you’ll know I’m on another themed road trip with Lucy the terrier. This one we’re calling The Lost Coast Then Just Lost. Yesterday was mostly about Redwoods as we traversed California’s Lost Coast and headed into Oregon. Meandering along and braking for every Redwood grove, we made it about halfway up the Oregon coast to Yachats. Today, there would be no meandering. The weather report was warning of a huge storm system due to slam into the area. So that meant trying to get up the coast and off this windy narrow road as soon as possible. That actually wasn’t too much of a change of plans. Some may condemn me for motoring past key sights. But the purpose of my road trips is often just to get out and drive through some place. Especially since I’m traveling with a terrier, I don’t tend to stop at museums, indulge in fine dining, or discover quaint little inns. It’s Best Westerns whenever we can (a universal pet-friendly policy) and just motoring along. Perhaps not quite as frenetically as Dean Moriarty, but we keep on truckin’. This was an especially effective technique up the Oregon coast.

Here’s the thing: when I travel, I usually brake for every roadside attraction and historical marker, I take tons of pictures, and I post every step of the way on Facebook. But since I left Mendocino, I’ve had little to no cell reception. In fact, I’ve had no radio reception, sporadic GPS coverage and not much satellite radio. Even in the motels, the wi-fi has been unreliable and I’ve been lucky to get the three original networks on the TV. The Lost Coast indeed! (Although technically that name just refers to the upper part of California’s coast.) In addition, as I mentioned yesterday, traveling UP from California is exactly the opposite of what the guidebooks tell you to do. All the historical markers and vista points are on the left side of the road, which means you have to cross over the other lane on a windy road where you can’t see what’s coming around the bend. And what’s usually coming around the bend is a large semi loaded with Redwood logs, or a massive RV. In a Prius, that’s a scary proposition. So for this leg of the trip, I just drove and looked and experienced. I didn’t listen to music, I didn’t stop and take pictures, I didn’t post to Facebook. I just drove and enjoyed the scenery, only occasionally stopping for a terrier potty break. 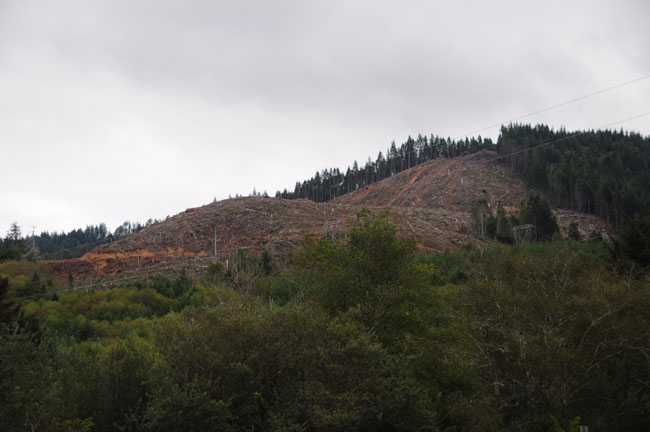 The ugly side of the drive is glancing up at the hills and seeing how poorly timber companies are managing their harvesting. Many hilltops are just denuded.

Turns out driving through unplugged is probably the best way to do the Oregon coast. There are a lot of little towns on your way up the coast, but, on a cuteness factor, they don’t match the kind of villages you see in Vermont or parts of New York. And you won’t find charming towns full of artists and farm-to-table restaurants as you would in, say, Sebastapol, Mendocino or Sonoma. Instead think sort of rough and ready logging towns, turned jumping off points for hikers, bikers, kayakers and fishermen. Many towns are vaguely Victorian frontier, but more 1940s hunting camp with lots of neon, RV parking and propane stores. Not that they are without charm. Except for Crescent City and Brookings which bracket the California/Oregon border, I saw no chain stores and no fast food, just diners, saloons and bait shops. But it’s really all about the coast, which doesn’t disappoint.

Even in limited visibility with rain threatening, the views were astounding. 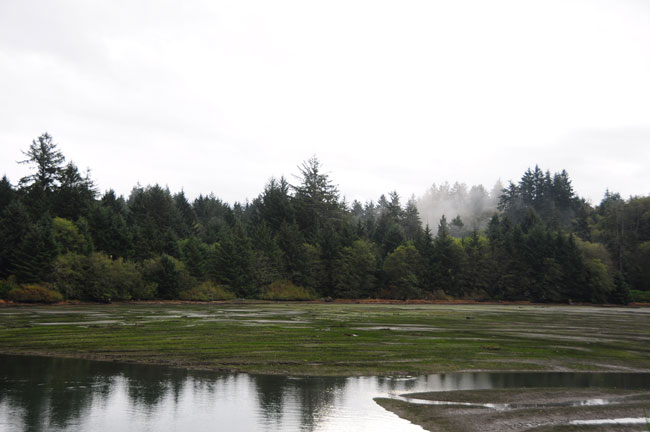 On the non-coast side of the road are lagoons and forests and mountains.

So here, in no particular order, are some of my impressions.

1) There seem to be two Oregon coasts, roughly defined as below the little town of Yachats and above it. Below Yachats, it feels more like California’s Del Norte and Humboldt Counties. That is rough and ready, kind of Wild West and very focussed on  servicing the RV and camping tourists. It’s also the world capital of chain saw sculptures. If you want one, buy it here. Above Yachats, the coast becomes more about fishing fleets, and the towns are quainter and with more typical tourist amenities. Somewhere around Tillamook and above, it’s all dairy country.

2) Contrary to the stereotype I had of Oregon as coffee heaven, I couldn’t get a good cup of coffee below Yachats. Actually, I couldn’t get any cup of coffee. Perhaps because it’s past tourist season, what few diners I stumbled across were closed or just not observing regular posted opening times. Above Yachats, coffee was everywhere. And not at Starbucks which was nowhere in evidence. Instead every town, even the smallest, had at least half a dozen independent, family owned coffee shops — often in quaint little shacks offering drive-through service. Needless to say, every shack claimed to roast their own.

3) Curry County felt the most Wild West, but maybe because I have a personal connection there. A friend of mine is the decedent of a pioneer woman who was kidnapped, along with her daughter, and her family massacred by Rogue River Indians during their uprising. She and the daughter were rescued, but decades later, she was murdered by a man who became the last man hung in Curry County.  With place names like Pistol River, Humbug Mountain, and Wild Rogue Wilderness, it even still sounds Wild Westy. By the way, you can picnic at the Geisel Monument site where my friend’s relative and her massacred family are buried.

4) Oregon has some of the best cast concrete bridges — many of them circa early 1900s.  The Klamath River Bridge has two golden bears on each end. Nice touch.

6) I can’t stress how nearly completely free the Oregon Coast is from chain stores and fast food. Which makes places like Crescent City and Brookings extremely jarring as they have miles and miles of every kind of fast food — especially the nasty chains like A&W, Kentucky Fried and Taco Bell. That said, Brookings does have a nice little harbor once you get through the crap. And some interesting history. It was the site of the only mainland bombing during WWII. A Japanese pilot managed to drop bombs in a nearby forest which he hoped to burn. He was unsuccessful, but years later, came back to Brookings to offer the town his family’s 400 year old Samurai sword. 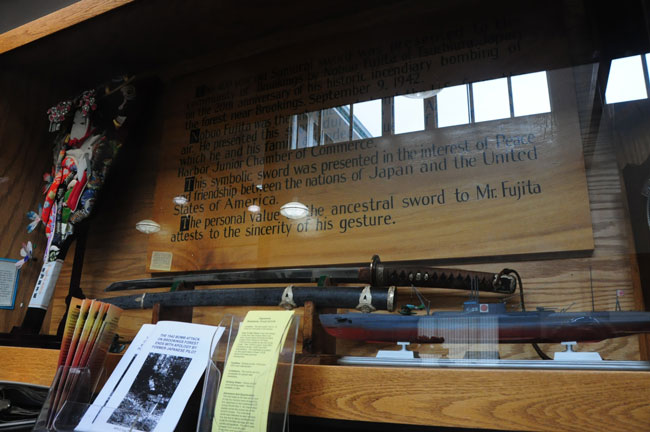 You can see it at the Chetco Public Library, which, by the way, is one of the nicest and most extensive small town libraries I’ve ever seen.

Once we finished with the coast route, we turned inland toward Astoria to end our trail appropriately by seeing where Lewis and Clark ended their Voyage of Discovery. 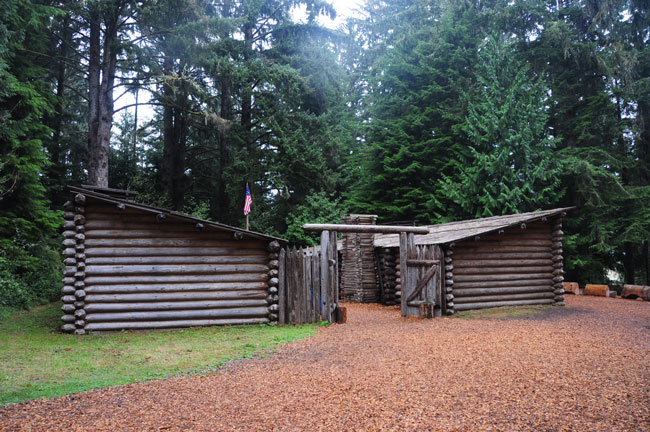 I highly recommend visiting Fort Klatsop outside Astoria where Lewis and Clark’s band spent the winter after finally reaching the Pacific. There is also an excellent museum that recounts the whole journey and a garden of plants catalogued by the explorers. 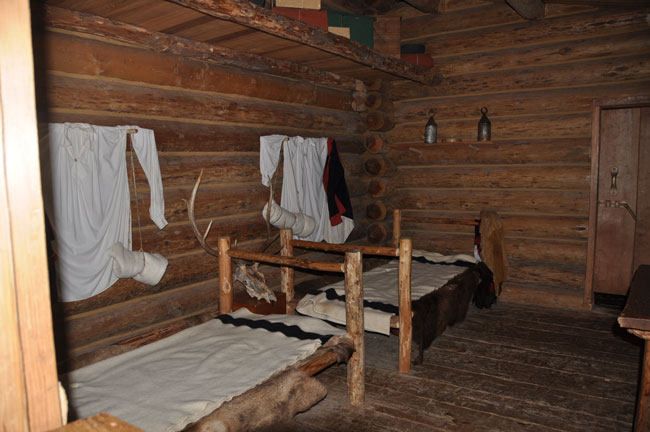 Biographies always say that winter in Astoria was miserable, but the recreated fort looks kind of cosy.

By the way, since I’d made such good time, I pressed on after Astoria along the Lewis and Clark trail, then veered up into Washington. I had two goals, to dip into one of the few states I’ve never visited and to see the Mount St. Helens explosion site. By this time, the rainstorm was really threatening and I questioned if I wanted to drive up a mountain in a Prius ahead of a weather front. I braved it and got most of the way up Spirit Lake Highway toward the Johnson Observatory. There isn’t a clear view of the volcano, mainly because the road almost winds up the side of it. There is even less of a view when the clouds descend. 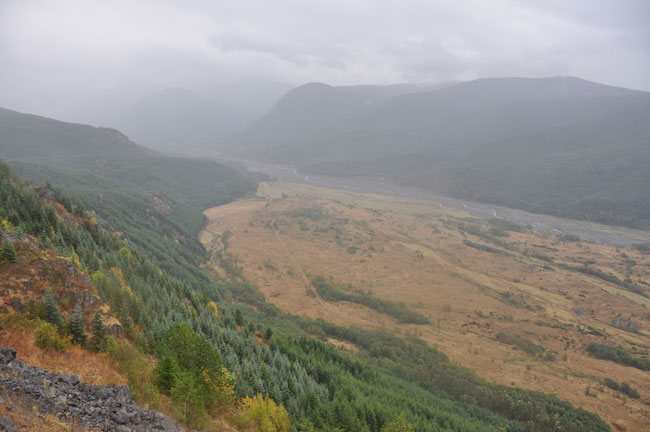 Here’s a view into part of the caldera — and the remains of the largest mudslide in human history.

Back at the motel, I opted to explore another phenomenon I’d seen all the way up the coast. There are an amazing number of classic Chinese American restaurants — of the type that feature signage in fake Chinese letters, serve Chow Mein and offer a full cocktail lounge. 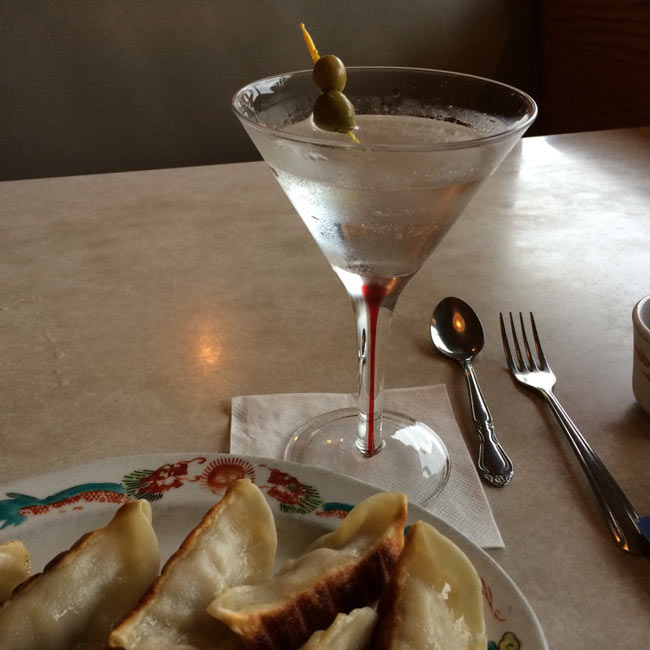 A Martini and pot stickers seemed like just the thing. 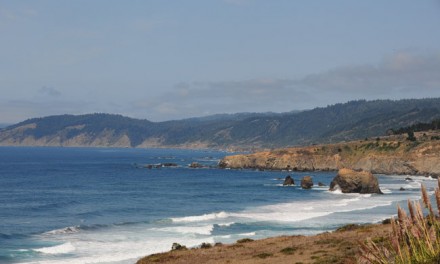 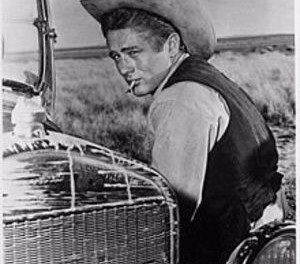