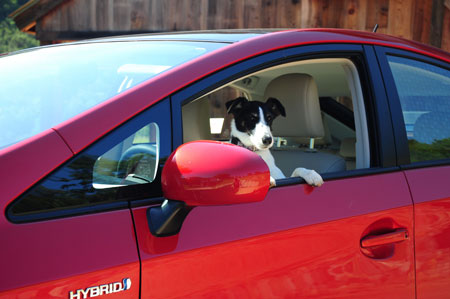 By now, most people know I’m on Team Prius. I’ve had three so far, starting from when they first rolled out in the U.S. in the Year 2000. I’m always looking for ways to be more eco-friendly, but the big impetus was the election of George W. Bush. I was so furious and so concerned that this would set us back environmentally that I went out looking for an electric car. They were just being pulled off the market, so I went for the next best thing and got one of the first Priuses. You know, the little tin cans that had no trunk space and a backseat for two friends — if your friends happened to be midgets or toddlers. That was back when Toyota figured no one but off-the-grid hippies would drive a Prius, so there were no amenities. Everything was manual and the seats were cloth. The air conditioning, I suspect, was really just an air vent with some knobs to make you feel there might be a unit in there. Didn’t matter. I loved that Prius and named it Old Paint. I might be driving it still but for two factors: 1) I got terriers, necessitating enough room to carry dog crates and 2) Prius finally came out with a model that had a few amenities that might be recognizable from cars built after the 70s. So I traded up happily, especially because with all the rebates the State gave me, the resale on my first Prius was more than I’d paid for it. That middle Prius, Old Roany, sustained me through a lot of miles and a lot of interesting roadtrips including this one. Again, I’d probably still be driving Old Roany, except that Andy has this impenetrable formula that alerts him at the exact moment when any car has reached its peak resale value and starts the inevitable decline. He called it on Old Roany and said I should trade it in and get another car. That’s how I came to be driving Rainbow Dash. With her pearl blue color, she didn’t seem to evoke any old West horse name, so I picked one from the My Little Pony series. There is a certain five year old who applauds that. 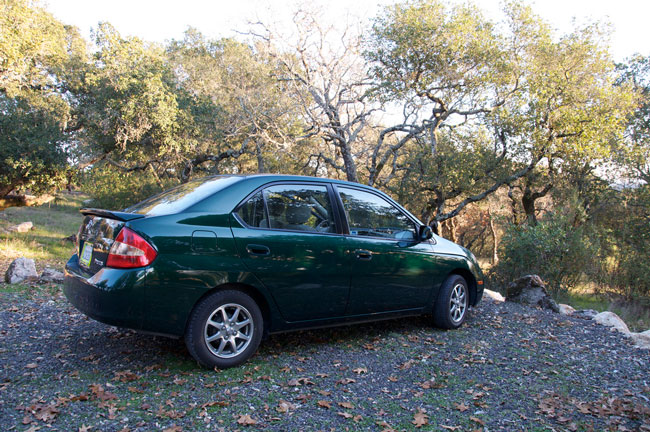 Old Paint, my original Prius. It was a sardine can on a skateboard, but that didn’t stop me from pushing its limits.

My ranch guys have always joked that I’m the only person who uses a Prius like a pick up truck. I haul dogs and firewood and multiple bags of chicken manure and compost in it. I’d hitch it up to the trailer but, you know, it’s a Prius. It probably couldn’t tow a child’s tricycle. And herein lies my problem. We have The Beast, our diesel-powered, 4 x 4, rip-snorting, fence moving, boulder carrying Chevy Silverado, which is the all purpose ranch vehicle. Even my guys, with their pick up trucks, can’t go down and get the largest wood shredder. The rental place will only approve The Beast to tow it. When we get horses, this is the rig we’ll use to tow a horse trailer containing thousands of pounds of horseflesh. So for all other purposes, Rainbow Dash should last me for years and years, right?

Unfortunately not. Mainly because the whole equation has changed with our recent move from San Francisco to San Jose. Whereas the Prius used to be perfectly fine for the usually slow traffic on Highway 101 then sleepy Route 37 up to Sonoma, now I’m doing the two hour plus drive up north on what must be the scariest freeway in Northern California. I start out on a quick spur of the 880 which local cops call Blood Alley because of all the accidents. Then I switch to the 680 where I seem to have a life-flashing-before-my-eyes event on every run. The problem is the huge number of trucks and tractor trailers on this road. Which means I, in my little fiberglass sardine can, am sharing road space with massive eight tired rigs at least ten times my size. In the Prius’s defense, let me say that it has fabulous visibility with a large windshield, super large (for its size) rear view mirrors and almost a 180 degree view to the rear through a large rear hatchback window and side windows. Let me tell you, you need that visibility. Because NOBODY can see a Prius. Even Subaru station wagons can’t see the Prius. So if you can’t get out of harm’s way, no one else is going to prevent that accident. And how bad would that accident be? Well, judging from the damage done at low speeds on my recent roadtrip, I don’t even want to contemplate what that car would look like after a 65-70 MPH impact. Although I’m all about the great gas mileage, I’m starting to wonder how much that will matter to me after I’m splattered on a concrete shoulder by a merging big rig. 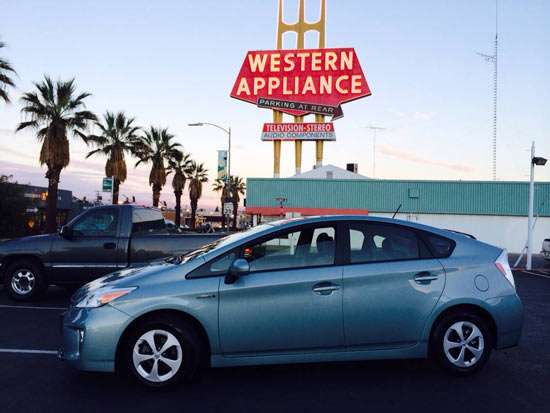 But here’s the thing that’s really concerning me: I’ve always done one epic roadtrip every year or so. Now I’ve got a bucket list so long, I’m thinking I’m going to step that up to two a year. And when I say “roadtrip” I always mean seldom traveled roads. On my last two roadtrips, I found I got myself out in the middle of nowhere Nevada or Eastern Oregon where there was a historical site or interesting geological formation to see. But I couldn’t see it. The last mile or so was inaccessible to a Prius. On a couple of occasions, I parked the car and hiked in to what I wanted to see. But lately, I’ve realized, you don’t have to get further than 1 yard off-road to be off-roading. On the Columbia River Gorge scenic route especially, all the turn-offs were around blind corners that required accelerating from a dirt turnoff into the two lane blacktop. Anyone who knows the low, low profile and clearance of the Prius, knows that there is no accelerating over anything but completely level ground. In fact, “accelerating” has to be graded on a curve with the Prius.

Yup. It’s pretty clear that, if I want to continue with my current new driving patterns — and I want to live or see anything — I need to rethink the vehicle situation. Which brings me to the intensive round of review reading and showroom visiting that I’ve been engaged in. I’m not a good car shopper. Especially since I’ve spent more than a decade in Priusland. I’m nearly fainting at the gas mileage that the average car gets. Are you people really driving around thinking 30 or 35 MPH is good gas mileage?

After all my research, I’m pretty sure my dream car doesn’t exist. Because here’s what I want, and most of it is mutually exclusive:

1) A high-profile so that I’m visible to all those big rigs. And good visibility all around, in case they aren’t paying attention. Plus a sturdier build with a lot more protection in case it all goes horribly wrong.

2) Enough room to put two terrier crates side by side — with enough room to have airflow around them. And maybe enough room to include some luggage other than a small purse. Surprisingly, the Prius was pretty good on this point. The back seats folded down completely flat (which a shocking number of SUV and station wagon don’t!) And while we’re at it, on some of my roadtrips, motels were few and far between, but I did pass campgrounds. I’d like the ability to put an air mattress in the back should I need to make an emergency KOA stop.

3) The ability to go off-road. Not necessarily climb Mount Rushmore or ford raging streams, but run down some of the ranger roads that are allowable for 4x4s in places like Joshua Tree, Anza Borrego and Death Valley. At the very least, I want to get from a place like Route 50 in Nevada to the Singing Sands which were 1 mile down a deeply rutted road. When I was there, I ended up walking under the broiling sun since I was pretty sure that, if I got my Prius down that road, I wasn’t getting back.

So far, here’s what seems to fit my criteria:

I never before thought about the JEEP, but as I cruised down Steven’s Creek Boulevard — where every car dealer known to roadways is represented — the new JEEP Wrangler Unlimited caught my eye. I pulled into the lot, sat in one and I was in love. It’s irrational and probably tied up with remembering rides in my Army officer Dad’s real JEEP when he was staging war games at West Point and in Germany. But this feels like my car. I’m wincing at the gas mileage, but Andy tells me that when you look at a car like this, you don’t even discuss gas mileage. Suddenly I had visions of myself out in Utah, driving off road, discovering ancient ruins, fording sudden flash flood filled arroyos. Of course the question is — relatively speaking, how much of my driving time will be off-road in Moab and how much will be driving up the East Bay on freeways. Then there’s that abysmal gas mileage. Andy, the master of buying impractical cars, says you just don’t ask those questions when you are looking at a car that will be fun to drive.

But again, I’m coming out of Priusland. So something that just barely breaks 20 MPG is a hard pill to swallow. So there is this: 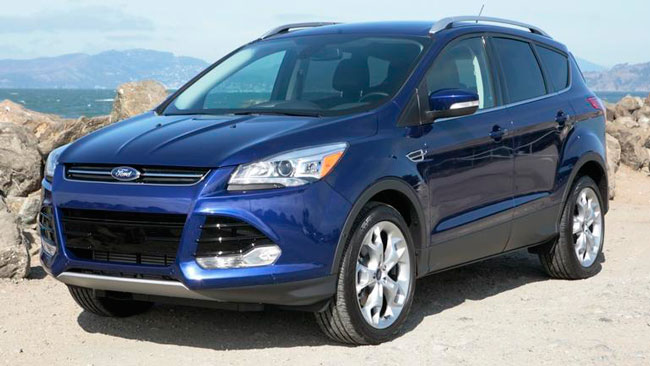 The Ford Escape Titanium. It’s not quite as pod-like as your average SUV. But then again, it’s not the JEEP.

So here I sit weighing the pros and cons. There is a good little angel on one shoulder saying, “The Ford has all the highway safety features, plus 35 MPG on the highway.” The bad little devil on the other shoulder is saying, “Be freeeeeee. Get the JEEP. You know you want the JEEP.”

I have no idea who will win out. I’ll test drive in the next few days.

In the meantime, the little devils are yelling loudly for that JEEP. 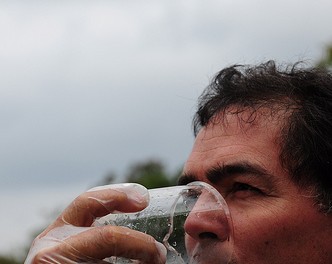 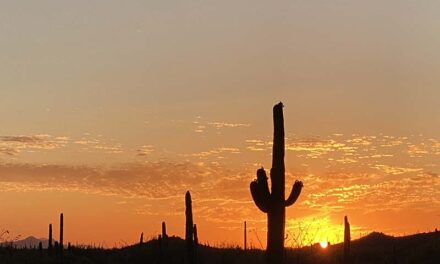