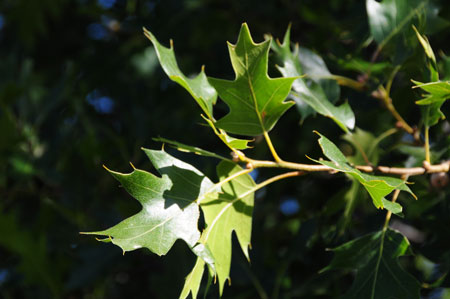 Our construction project for our eventual home in Sonoma continues apace. What? You thought we were going to continue to live in a loft above the barn or out in the tent cabin? No, we are working on an actual house, although it’s taking a long, long time. One of the issues is that we may or may not be on a ridge line. After some ill-advised monster homes were built, Sonoma County got serious about preserving the natural look of the ridgelines which is part of the beauty of the area. That means no more building on the ridge. However, there was enough dispute over whether our little mountain constitutes an actual ridgeline, that we were finally given permission to build with some serious restrictions. I should note that all of these restrictions are things we completely agree with — making the height of the house low profile, and shielding most of it from the Valley with a screen of trees and shrubs. So I’ve been happily planting baby oak trees and Ceanothus (California Lilac) around the site to provide an eventual screen.

“Eventual” is the sticking point. While the oaks will take years to fill in, the Ceanothus we are using are fairly fast growers for California Natives. In five years, we’ll have a pretty thick screen. But “eventual” isn’t enough for the County. Seems people have, in the past, bought small (and inexpensive) trees, planted them, gotten their permits, then ripped them out to restore their full view. So now, nobody believes a homeowner who swears she’s committed to proper screening. Now the County is mandating that a fully sized mature tree be planted in front of the house. I’m sure the thought is that, if you have to go to the great expense of planting a mature tree, you won’t rip it up. Unfortunately, planting a mature tree — even one that is drought-tolerant — requires up to three years of extensive watering to help it re-establish. Contrast that with growing a native such as Ceanothus from a small size. It can be planted on the cusp of the rainy season with only fill-in water if that season has below average rainfall. Then it thrives on its own with no additional water. Nope, we have to go with a mature, water-guzzling tree. I don’t blame the County. I blame the bad actors who ruin it for the rest of us. 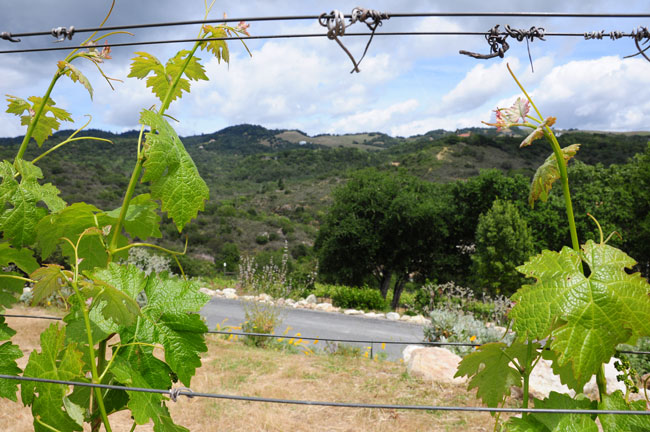 If you look closely through our vines, you can see the large homes that are further up the ridgeline that have clearly NOT screened their homes from view.

So that brings us to getting that mature tree in place, which is a logistical hurdle of the approximate complexity of invading a small country. There’s the guy who sources the tree. But he only brings it to your place. Then there is the guy who cranes that 7000 lb. tree into place. But he’ll only do the heavy lifting. Now you need a guy to tease out the roots and do the proper planting of the tree. Then you have the tree itself, which is increasingly unhappy the longer the interval between when it is dug out of the ground and when it is put back in. Clearly, all the moving parts and all the teams have to be tightly in synch to organize this operation.

Sadly, that did not happen.

First, we had the flakey tree guy. I understand that olive trees of this age and size are not just sitting around in nurseries. Our particular one came from an old farmstead in Fresno. But since, the tree guys were just delivering the trees, they weren’t particularly interested in dealing with any of my emails, even though I was insistent that I had to know the exact weight of the tree, so I could order the right sized crane. And that I was concerned that they understand, beforehand, the logistics of our steep road so they brought the tree on a truck that could negotiate the path to the house site. I am here to tell you that no matter how many dozens of emails you send to people who only feel they need to accomplish part of a job, they will not read anything beyond what they deem their tiny piece of the puzzle. Construction and heavy equipment guys will also, as a rule, not listen to women. I was obsessive. I sent the tree people the exact grade of the hill, the curve of the road, the width of the gate. I think they only bothered to read the email with the delivery address. Of course, this poor tree showed up on a truck that was unable to negotiate the road. 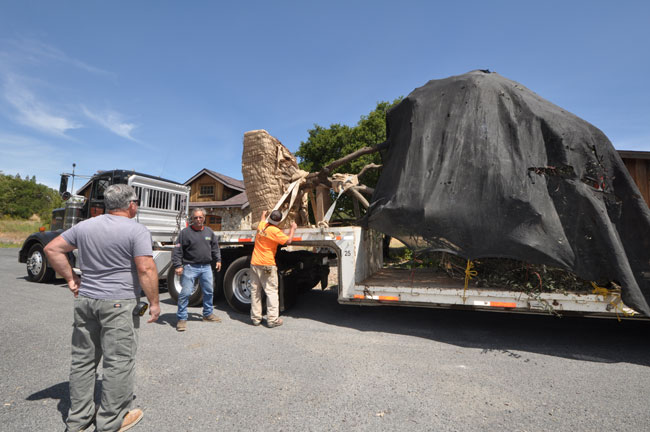 The first tiny inkling that something will go terribly wrong. A big fricken tree on a big fricken truck. Not gonna make it up a steep dirt road.

Luckily, Ranch Manager Louis, who wasn’t supposed to step in until the tree needed planting, came up with a quick Plan B. Rent a trailer, hitch it to the farm truck we call The Beast, and get the crane guy to hoist the tree onto that improvised rig. Success!

No. The crane guy, who also had been sent dozens of emails detailing the logistics of the job, had also completely ignored all the salient points. In this case, it was overconfidence. This is a company and an operator who have been to our site at least three times to hoist various things like large rocks and a section of the roof into place. Or maybe, nobody ever forwarded my emails. As I was communicating through the contractor and assuming he was passing the details on to the Crane Guy. But the contractor was giving his version of “Don’t worry your tiny head, let a man handle this.” And as late as half an hour before the tree needed to go up the hill, as I was talking to Crane Guy and saying, “Are you sure you are completely sure of the logistics here? Are you sure this crane is strong enough and big enough to hoist this tree completely over the roof of the house and into the planting hole”, I was getting the standard construction guy’s answer of “Don’t you worry your tiny head, little lady. I’ve been to this property, I know exactly what I’m doing, I could do it with both hands tied behind my back.” Finally, I demanded that the operator go up in the ATV with Louis to scout the site before he drove a 5000 lb. crane up there. He grumpily agreed because, damn it, he knew his business and he knew the property and knew exactly what he needed to do. Surprise, surprise. Crane Guy came back from that little excursion swearing that he had NO IDEA that he had to hoist the tree over the building. 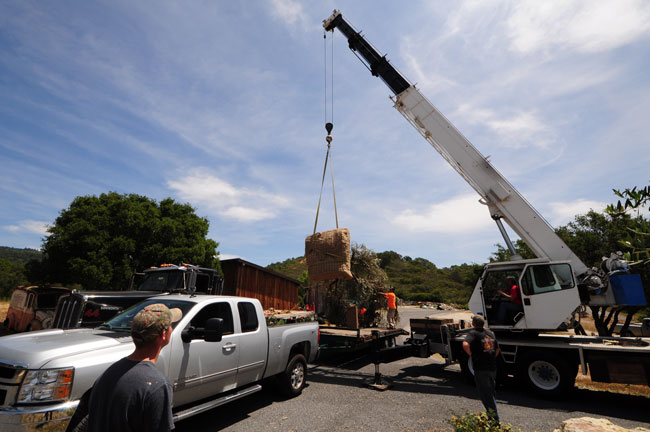 Craning the tree from the too big truck to the smaller truck.

Stale mate. And the poor olive tree is visibly wilting as the hot Sonoma sun beats down on it.

So here we have a situation where the crane brought to the job site is clearly inadequate for the job. In fact, according to the Crane Guy, if he tried to lift the tree and lever it over the roof of the house, the whole apparatus would crash into the house destroying it. Okay, not an option. What was his suggestion? Let’s take this 5000 pound crane down a narrow ATV access road on the side of the house, possibly crushing my two buried cisterns and then negotiate a narrow turn at the corner of the house. Since it’s a tight turn for the ATV, I immediately had visions of two possible scenarios: the crane makes it through that tight turn but can never back out of there. Because the only two possibilities for taking a huge crane down a ridge-side ATV path is that it will smash out the front corner of the house or it will plummet down the hill taking out my orchard as it goes. Naturally, I vetoed that idea in no uncertain terms. Which lead Crane Guy to call up his dispatcher and say, “This lady won’t let me bring the crane down her road.” Yeah Bud, I won’t let you completely wreck havoc on a home in progress. And when, after you told me the crane was completely inadequate for the job, did it become an option to just move the crane to a tighter, more impossible to maneuver space? How does that magically make this the right crane for the job? 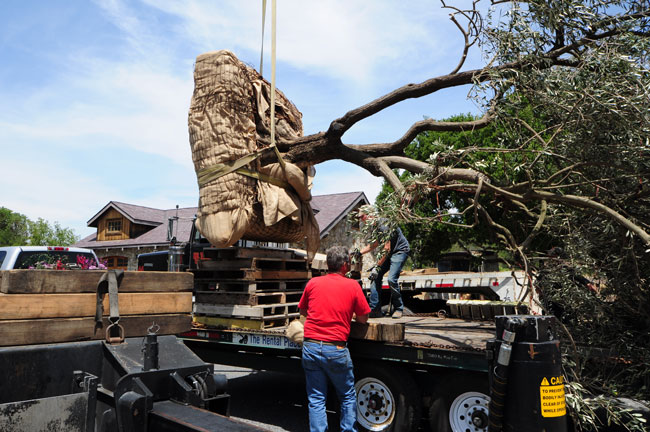 About the point where we realized we’d need a bigger crane.

At this point, accusations were flying thick and fast. Some people were pointing at me, but I had my email trails. Then they started pointing fingers at Louis, who was never supposed to be part of this equation until the tree was up the hill, over the roof and suspended over the hole. Discretion is the better part of valor and Louis and I retreated to let the screaming and finger-pointing happen without us present.

That brings us to tomorrow. When Louis will haul that tree up the hill. Hopefully, the right crane for the job will show up and hoist the tree over the roof (without falling through said roof), the poor tree will get into the earth at last and can be nursed back to health by my Ranch Guys.

Because, believe me, that poor tree is going to need some serious TLC after a three day weekend with rootball exposed to the Sonoma sun. We’re all hoping for the best. But if my super expensive, mature tree, which should never have to be subjected to this transplanting if the County would only let me plant water-wise small trees, dies because certain males couldn’t be bothered to take instructions from a female because — “Well, we know heavy equipment. You don’t”, they will feel my wrath. 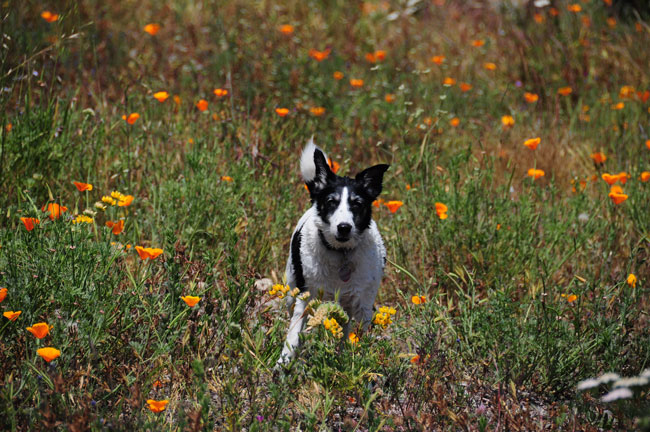 Terriers are on patrol. And ready to bite anyone who pulls that “Hey, little lady” shit again.

The moral of the story: the little lady doesn’t necessarily have to know big equipment. But if she is sending you complete information on the logistics of the job, pay attention! 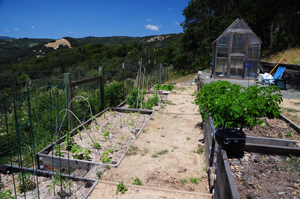 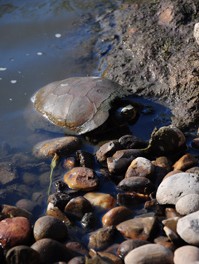