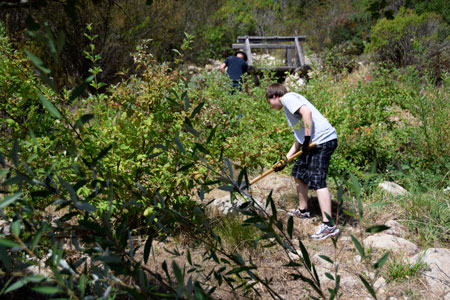 I mentioned earlier that I’m reviving Wine Camp at the request of an old friend. Being French by birth, this friend thought having his son and his son’s friend spend a week or ten days at a winery sounded like a great break between the end of summer and the start of college. Not being a winemaker, he was not aware of the fact that, in winemaking, there are only one maybe two guys who get to swan in, swirl wine around on their palates and pontificate as to how much extra Mourvedre or Grenache should be added to “brighten” the Rhone blend. Those two guys would be Andy and our winemaker. For the rest of us, “winemaking” consists of cleaning shit, reorganizing and hauling shit, and various backbreaking ranch/agricultural chores — usually performed in the broiling Sonoma sun. I tried to make my friend, Philippe, understand this. I stressed again and again how hard the work is — and how very little of it involves holding a glass of Cabernet up to the sky and exclaiming, “Ah zee wine! Eet is sunshine held togezzer by water.” Since we are weeks and weeks away from harvest, I impressed upon Philippe that we are right in prime brush clearing, bottle reorganizing and equipment inventory while very far from anything that is remotely romantic or even directly wine-oriented. He assured me that the kids completely understood what they were getting into and were still excited about it. Okay, then…

Three days into Wine Camp and Ranch Manager Louis and I have reason to believe that my realistic portrayal of a working vineyard did not exactly get conveyed to the extent I described it. Or maybe I didn’t adequately explain about Ranch Manager Louis. He’s run a lot of people on his crews. I don’t think he’s ever failed to take ten, twenty, even thirty pounds off a crew member depending on how long they are here at the Rancho. Not that I think that amount of weight would fall off these kids in less than two weeks, but when I finally saw them, I realized neither of them had even five pounds to spare. So when I asked Louis for a list of chores for these kids, I had to eliminate any that I thought might actually kill them. That resulted in a very short list. But there was one project that was vaguely wine-related, but could also be classified as “moving shit”. One thing I’ve learned in winemaking — or in my end of it which is the grunt work — is that, at several points in the year, you will have to haul a pallet or two of wine bottles from one place to another, usually box by box. Since we had several dozen boxes of empty bottles stashed in a couple of horse stalls that needed to be brought into the wine storage area, Louis thought that would be a perfect job for the kids, Noah and Hannah.

I still worried: “Louis, a box with twelve empty wine bottles in it is still heavy for someone not used to a lot of physical work. And there are a lot of boxes. Do you think they’ll be able to do this?”

Louis: “Well, let’s work’em and see. Time they toughened up.” 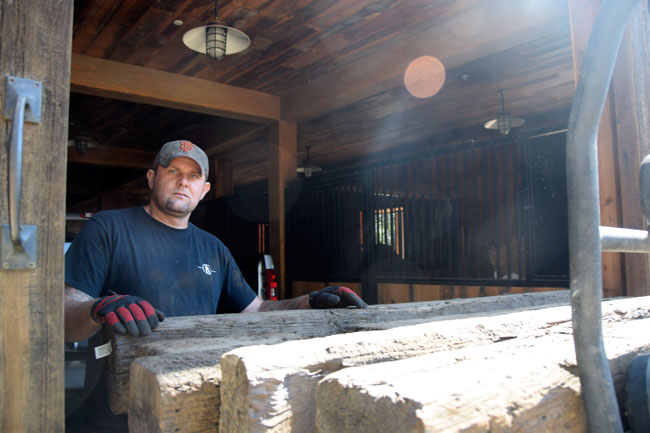 I should mention this exchange happened while Louis was hefting 150 pound railroad ties into the ATV. The man’s definition of tough may be a bit beyond ours. 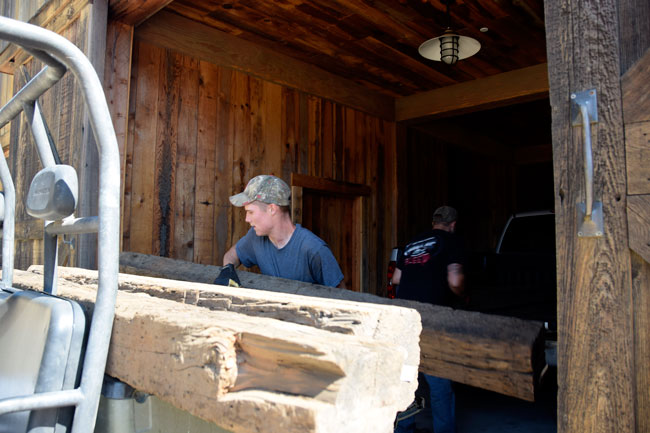 He pointed out that new Ranch Guy Johnny was hoisting railroad ties, too, and he’s about the same age as the kids and slim. Yes, but there are people who can easily benchpress twice their body weight and I suspect Johnny is one of those.

To spare Noah’s parents, I won’t show pictures of their son hauling boxes of wine bottles to storage and hoisting various pieces of wood and other stuff into the trailer for a dump run. 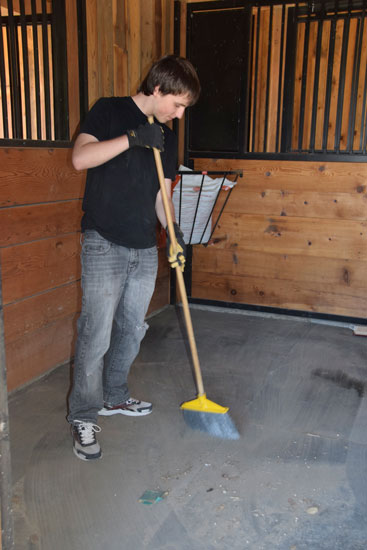 There was a little bit of Shock and Awe, but after a fluid break, the sweeping part of the task came a lot easier. 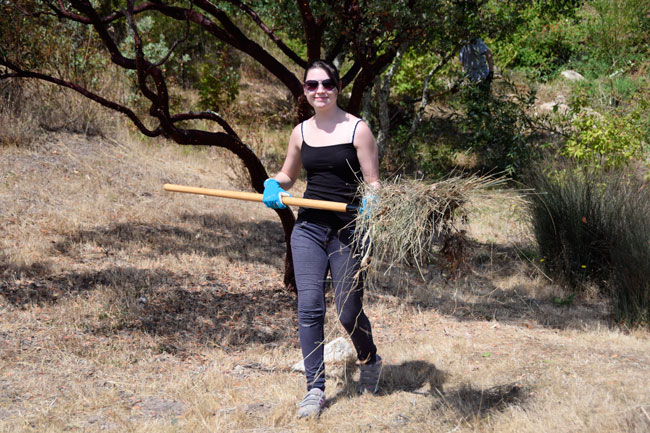 Did I mention there was also a lot of clearing of brush and weeds out from the pond area? And Hannah managed to maintain style while she did it in 95 degree heat.

Now I’m not going to give an opinion here, but Ranch Manager Louis and Johnny think Hannah is the one who could be made into a fine ranch hand. They like her aptitude and work ethic. They also noted that she was constantly telling Noah to “step it up”. The guys were musing whether teenage girls might be harder workers than teenage boys. Hey, I’m just the reporter here. I’m not saying a thing.

We did have one incident that nearly derailed Wine Camp, when Hannah told us that she is so allergic to bee stings that she once had to be rushed to the hospital barely able to breathe. I think this was casually mentioned as I was showing the kids the 25 or so bee hives a local beekeeper puts down in our lower pasture. Unfortunately, Hannah doesn’t travel with an Epi-Pen — which it seems you need a prescription to get. Several panicked phone calls to local doctors and finally to Noah’s parents and we managed to get a prescription from Hannah’s doctor called in to the local pharmacy. Ironically, this was the day after little Oscie had gotten his nose stung by a wasp or a bee, necessitating an emergency vet visit. 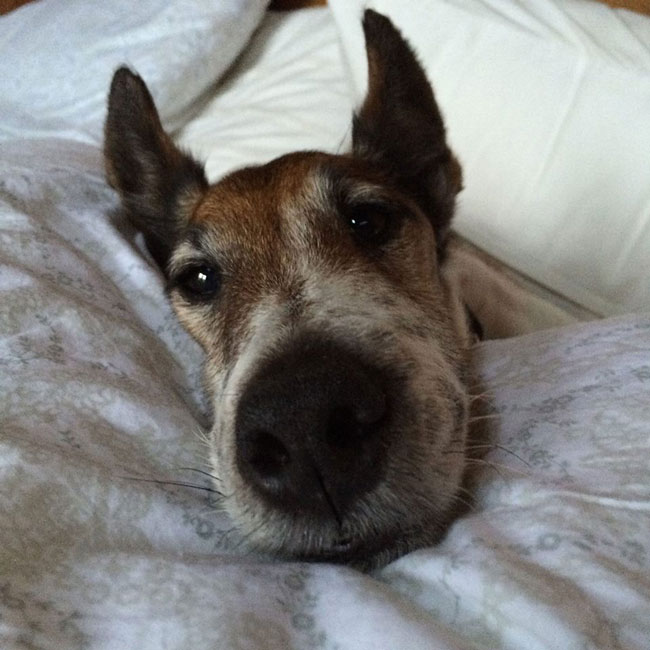 Clearly, I’m all stocked up on Doggie Benadryl for future bee emergencies, but I wasn’t sure what the dosage would be for a teen girl. Better to go with the Epi-Pen.

Meanwhile, back at Wine Camp, Ranch Manager Louis had come up with another chore. Let me pause and say that the first thing you learn coming from an office environment, as I did, into an arena of heavy manual labor is that there is very little mindless grunt work. Most manual labor, especially agricultural and ranch work takes a lot of experience and expertise. So dropping two suburban kids into the middle of it wouldn’t be easy even if each were built like the Incredible Hulk. Finding chores that they could do relatively unsupervised that didn’t involve machinery, plant knowledge and the science of lifting things correctly was a real challenge. Finally, we came up with one that we’d been putting off for a while because it is somewhat mindless and there are so many jobs ahead in the queue that need doing. I was watching Ranch Manager Louis closely to see if he wasn’t having a little too much fun with this exercise. But Louis has one of the best poker faces around. Still, I would guess he did get a little bit of a kick out of the fact that this particular job, besides being easy for a novice, is also pretty nasty in terms of the gag factor. Since I’m also somewhat in the category of not being experienced and knowledgeable enough to do REAL ranch work, I do a lot of this kind of work which usually comes under the category of pulling mice out of vats of grapes or cleaning up fox poo. 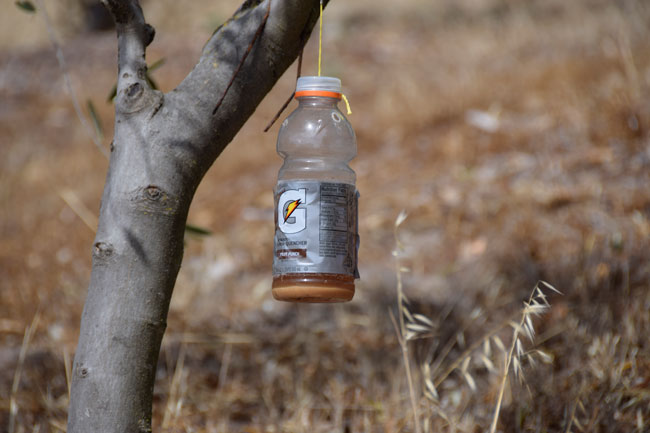 Anyone who’s visited the Rancho may have wondered at what we call our “White Trash Christmas Ornaments” hanging from every olive tree.

This is our innovative, totally natural, non-chemical way to combat the Mediterranean Olive Fruit Fly which is devastating olive crops in Napa and Sonoma. We punch holes in empty Gatorade bottle and half fill them with a mixture of water and Torula Yeast. Torula Yeast is a particularly nasty food additive, commonly found in very bargain basement dog foods and fast food entrees that purport to be meat based. If you’ve ever had a 7-11 microwave burrito, you’ve eaten it. Torula has an extremely strong meaty flavor — if by meaty, you mean something sort of cooked that has lain around on a counter for a few days. Unlike most of us, the Mediterranean Olive Fruit Fly finds it irresistable. They crawl into the Gatorade bottle and drown in the water. We’ve reduced an 80% infestation to near zero in less than a season. However, the hot Sonoma sun had evaporated most of the solution, so someone needed to haul a bucket of foul-smelling Torula Yeast mixture to the various orchards and refill the bottles. Ranch Manager Louis, without a hint of sadistic pleasure, decided that would be Hannah and Noah. 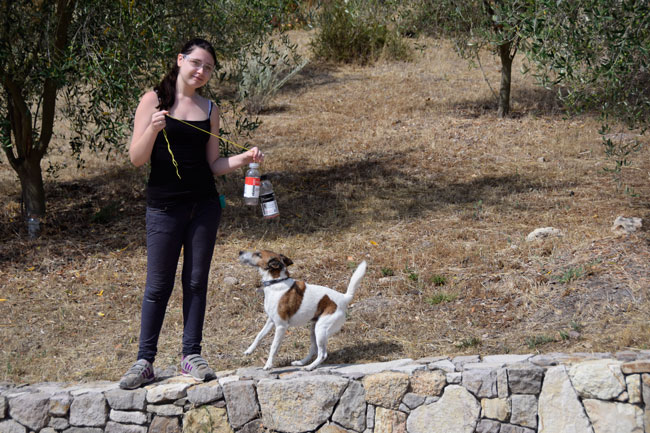 Suffice it to say neither Hannah nor Noah is going to be craving any gas station burritos for probably the rest of their lives. And notice how the yeast is already attracting a different kind of pest.

So yes, we’ve been having a grand old time at Wine Camp. And we’re only two and half days in! Hannah and Noah almost got to sort and chip brush until a fire started in the chipper. That’s ranch work. It’s all fun and games until something bursts into flame.

At this point, I was envisioning desperate texts, emails and calls back home begging to be rescued. However, the week did end on two high notes. Cousin John, whom long-term readers know and love as my radically organic winemaking buddy. You’ll remember that Cousin John is a purist of the first order. Once in the Louvre, John came across a series of 15th Century Burgundian tapestries depicting winemaking. Now he vows to use no winemaking technique that is not pictured on those tapestries. Truth be told, he’s still trying to convince me to make wine the ancient Babylonian way in sunken earthen pots. The kids did get to hear about twenty minutes of Cousin John’s impassioned plea for wild yeasts versus UC Davis yeasts. It’s an argument we’ve been having for years. 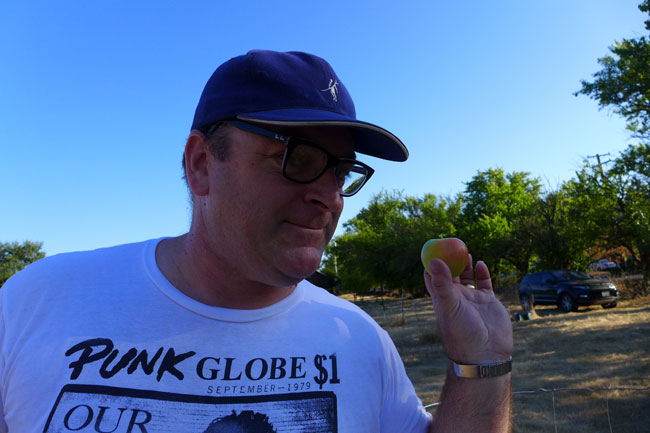 Cousin John brings the same purist passion to his fruit growing and we were able to sample some of his lovely Pink Lady Apples.

The final highlight was dinner at Sonoma’s famous Mary’s Pizza Shack. More than fifty years ago, with $700 dollars, a treasure trove of family recipes and a large family to support as a single mother, Mary Fazio built one of the most beloved chains in Northern California, with the flagship restaurant on Sonoma’s Plaza. 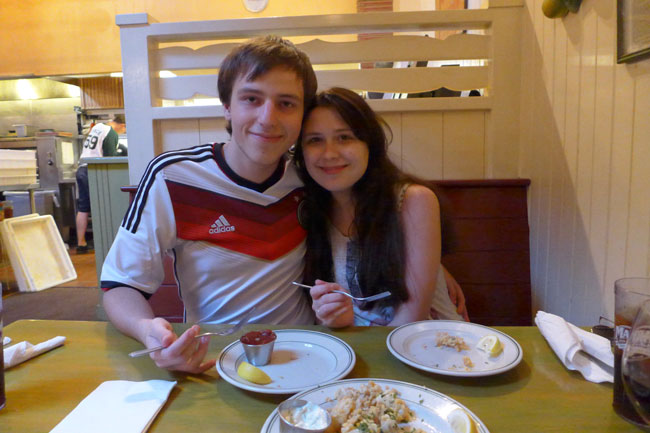 Even though Mary is no longer with us, her calamari and pizza can still put a smile on faces. Even after days of ranch work.