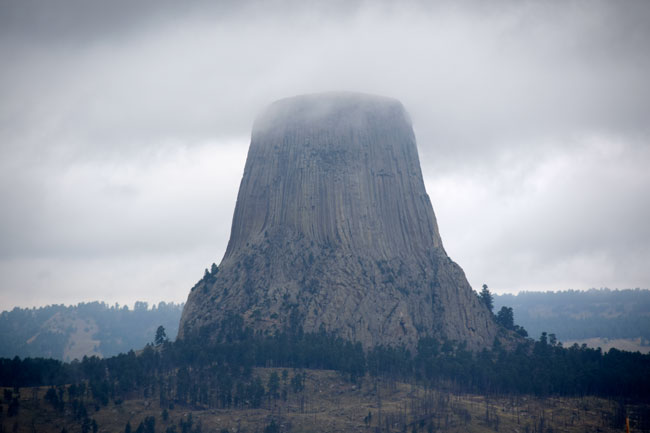 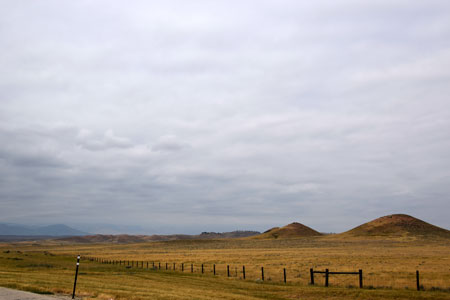 If there is one state that says The West, it’s got to be Wyoming. And today, I got myself out of the deeply weird town of Deadwood as fast as I could and headed for that border. As I’ve noticed in other state to state transitions, as soon as I hit that Welcome to Wyoming sign, the scenery changed dramatically. Suddenly, there were golden fields of nearly open range grasslands extending toward dramatic buttes and far away mountains. I was entering the land of Custer, Sitting Bull, Butch Cassidy and the Sundance Kid, Tom Horn and assorted cowboys, Indians, rustlers and legends. Much of it still looks as it must have — except it seemed strangely empty. I didn’t expect buffalo herds, but I thought I’d see cattle. There were very few of those. How magnificent these plains must have been filled with buffalo, pronghorn and antelope. I swung through Sundance, the town where the Sundance Kid earned his name by stealing a horse, a saddle and a gun. I just bought a low-fat mocha. Shortly after, I rounded a turn and down below me was one of the most spectacular natural sights I’ve seen. 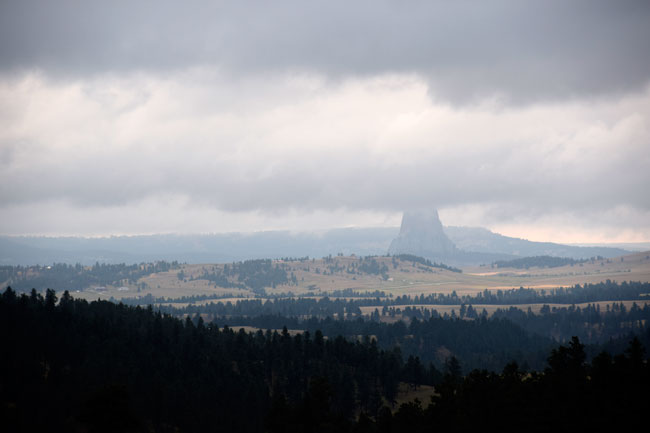 Shooting up from the plain was Devils Tower. Wreathed with fog, it looked like it was spewing smoke.

At the Visitors’ Center, I started to read about the geological reasons for the formation. But I was more fascinated by the various Native American legends surrounding it, most of which involve a giant bear. In fact, the various Native names for the formation are Bear’s Tipi, Bear Lodge, Where the Bears Live. Many tribes resent the name Devils Tower as being negative toward a place that they consider sacred. My favorite creation story concerns seven sister who were playing when a giant bear came after them. They jumped on a stump and begged the tree to save them. It shot up into the air, as the bear scored it with his giant claws. The stump threw the girls up into Heaven where they became the Pleiades or The Seven Sisters.

So if you want the geological explanation, you’ll have to Google it. I’m going with the bear.

I have to say, there was one horrible interlude where I entered the Gillette area which bills itself as one of the nation’s largest areas for “surface coal extraction”. If you think that sounds like strip mining, you are correct. I passed  shaved off hills and gaping coal seams, and choked on the overwhelming petroleum stench until I made it through to Johnson County. Back to the Real West and on to my destination of Buffalo.

Originally a stop on the Bozeman Trail, what put Buffalo on the map was the Johnson County War. You can get a highly fictionalized account by seeing Heaven’s Gate. You’ll get the real scoop at the Jim Gatchell Memorial Museum which I made my first stop in Buffalo. Jim Gatchell was an amazing man, a frontier pharmacist who was childhood friends with the Lakota and learned their language. As a result, he received numerous gifts from them and began a lifelong habit of collecting anything and everything to do with Johnson County history.  His excellent museum covers everything from geology and human migration in the Ice Age through the Fetterman Massacre, the Johnson County War and into the service in various wars by local notables. The museum straddles that wonderful divide between history and personal collection. Many of the Indian artifacts are considered sacred and you aren’t supposed to photograph them, however, I couldn’t resist taking a quick shot of Adolphe Metzger’s battered bugle. I just read this excellent biography of Red Cloud, who lead the greatest defeat of the U.S. Cavalry until the Little Big Horn just up the highway. 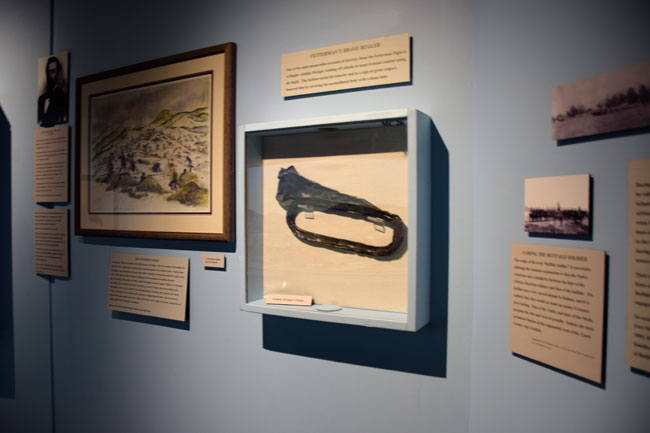 The legend goes that the young bugler ran out of ammo and continued to fight using his bugle. The Lakota were so impressed that they covered his body with a buffalo robe and didn’t desecrate it.

So good was the museum that I felt no need to rush off to the sight of the Fetterman Massacre or to the KC Ranch where Nate Champion held out against the hired guns brought in by the big cattle barons to terrorize the homesteaders in the Johnson County War. Which was just as well. All I really wanted to do was hang out at the excellent and historic Occidental Hotel, where anyone who was anyone — from Butch Cassidy to Calamity Jane to Teddy Roosevelt to Tom Horn and Buffalo Bill — rented rooms and downed Whiskey in the Saloon. Most exciting for me, the Occidental Hotel was where Eastern dude Owen Wister parked himself, observed local cowboys and wrote the world’s first literary Western, The Virginian: The Horseman of the Plains. 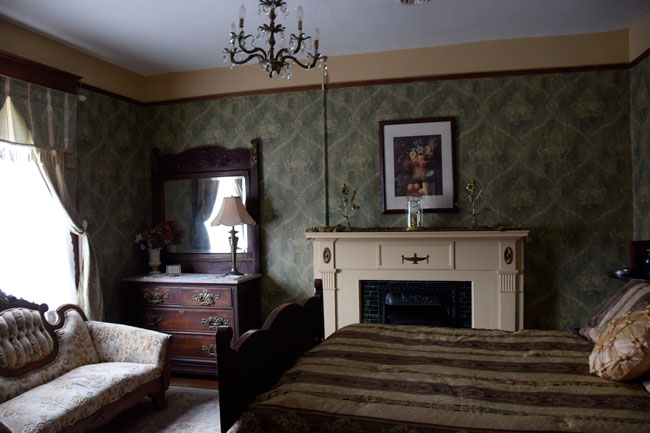 Best of all, I’d booked myself into the Owen Wister Suite, the exact set of rooms where he first sketched his outline for The Virginian. 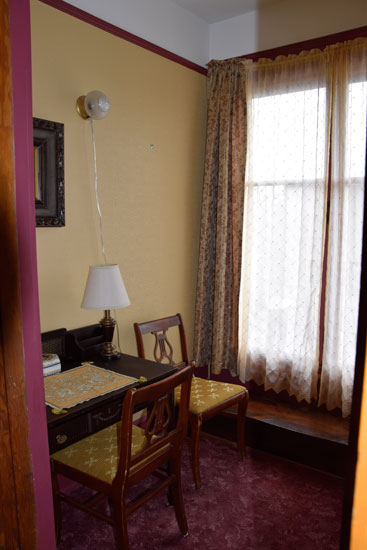 In fact, adjacent to the bedroom is a little writing alcove with the desk he used. How do we know he used it? Because the owner was a packrat and never threw anything away, simply labeled it and put it in the attic when she “redecorated”.

Take a look at the top strip of this post and you’ll see the balcony off this writing alcove. That must have been where Owen gazed down on Main Street where he staged the first literary instance of a walk-down shoot-out at high noon where The Virginian got that no good sidewindin’ varmint Trampas. Yes, that sounds like a cliché, as well as the novel’s other elements: the noble cowboy hero, the pretty school marm. But remember that Owen Wister invented those conventions. Every other Western writer from Zane Grey to Louis L’Amour just copied him. 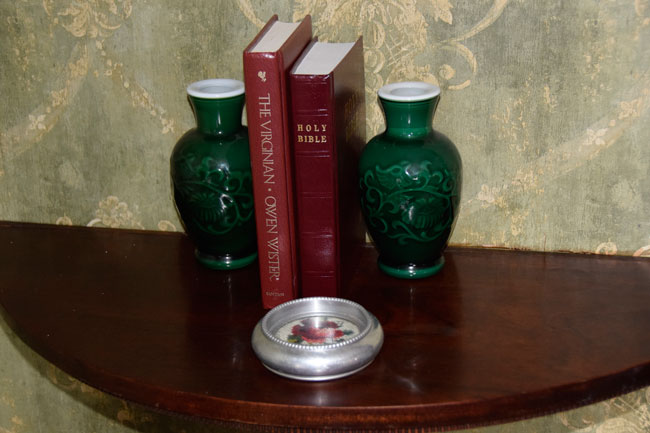 In fact, the suite includes what are probably the only two books you need in these parts. 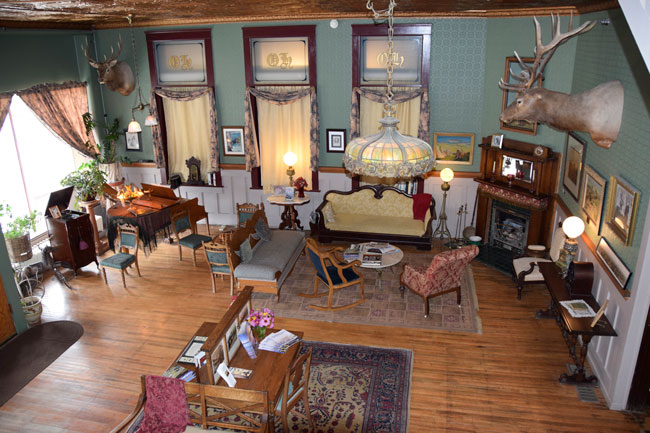 I spent the rest of the afternoon waiting out a driving rainstorm in the elegant front lobby and lounge — probably the original Ladies area where Trampas would have insulted The Virginian’s school marm intensifying their rivalry. 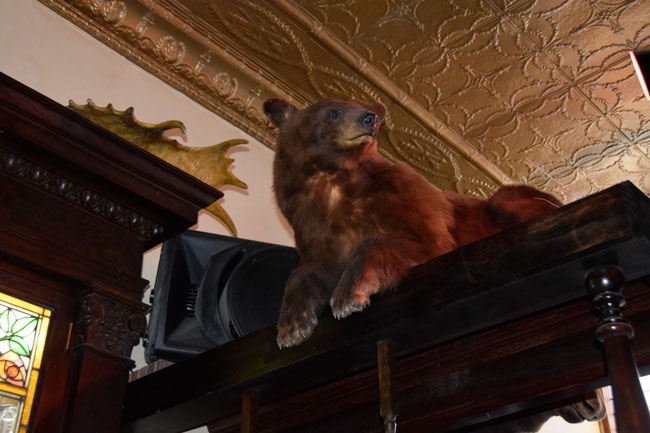 Then I moseyed into the Saloon and took a seat under the watchful eyes of dozens of stuffed local animals. Including this fella. 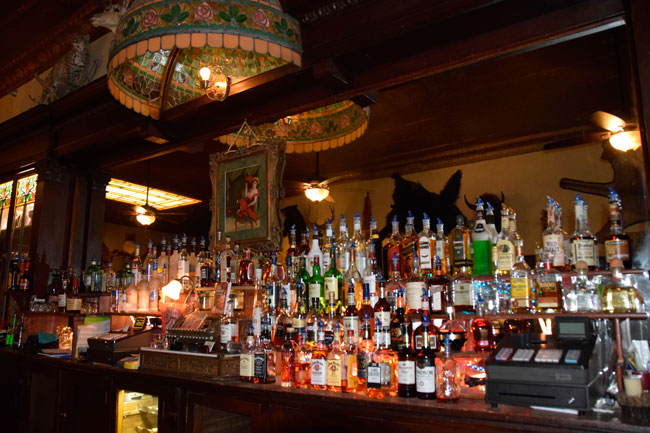 I probably should have ordered a Sarsaparilla or maybe a Whisky. They had lots of Whiskies. But I think you need to have the barkeep leave the bottle on the bar. I opted for a glass of wine. 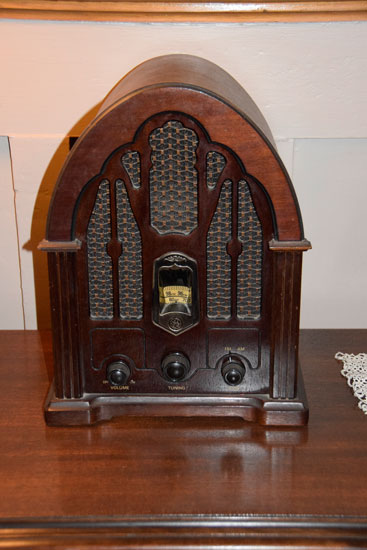 By the way, the hotel is filled with vintage radios, most of which work!

All in all, a satisfying day in the Old West. Tomorrow should only get better as I route myself to the Buffalo Bill Center of the West on my way to Yellowstone. 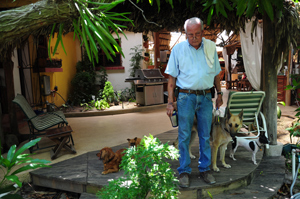 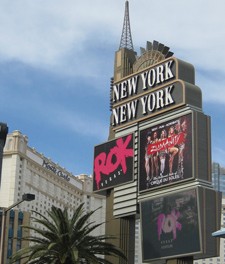