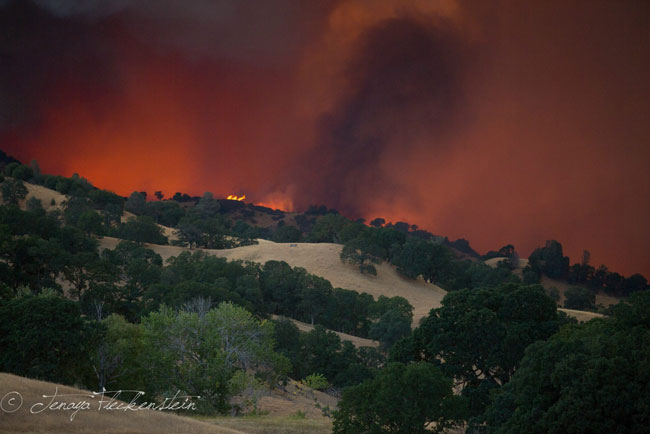 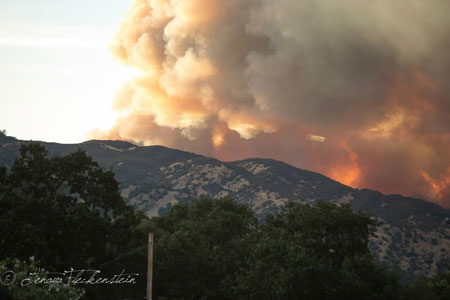 If you follow me on Facebook, you know that for the last several days, I’ve been dealing with the evacuation of my mother from one of the Ground Zero communities in the fast-moving Valley Fire, which fire professionals are calling one of the worst California wildfires in decades. Among the factors making this fire so dangerous: more than four years of a historic drought which has left forests and grasslands tinder dry, coupled with strong hot wind gusts of up to 30 MPH that were driving flames in all kinds of directions. The fire was literally explosive, flaring up within the space of an hour to thousands of acres, leaping across roads, and sometimes moving faster than cars could outrun it. Residents of my mother’s community saw the flames on a hillside and within minutes watched it scream down into Middletown and Hidden Valley Lake. In many cases, residents had five minutes to evacuate.

Before I tell you her experience, let me give you some background, because the media coverage of this fire has been abysmal, and the further away the media outlet, the more misinformation is being put out. First of all, a lot of out-of-state media are talking about this as Napa or Sonoma. While tongues of the fire are reaching into the furthest, little populated reaches of those counties, the bulk of this fire is in lower Lake County. And Lake County is a very different kind of place. First of all, this fire is not racing through vineyards — although parts of Lake County were traditional wine grape growing areas before Prohibition caused the collapse of the industry and farmers turned to fruit trees. (Historical note: Napa and Sonoma, with their large Catholic Italian and Italian-Swiss communities, secured contracts for sacramental wine, which helped them weather Prohibition.) However, the larger areas of Lake County are forested mountains or range land. Many people in Lake County live in small tightly-knit rural communities of feisty homesteaders, hardscrabble ranchers, Tribal Rancherias (Californian for Reservation), and a smattering of off-the-grid folks. Many people have lived here for generations, even back to the Gold Rush, and it’s not uncommon for residents to have most of their assets in livestock. This is also an area of few roads, most of them twisty, winding and mountainous. The largest highway in the fire area is the two lane blacktop of Route 29, which heads into Napa County to the south along a multiple hairpin 25 MPH road down Mount St. Helena, and goes North to Clear Lake which is the largest freshwater lake entirely in California. (Tahoe is bigger, but we share it with Nevada.) As you might guess, the logistics of moving large numbers of people is especially challenging. The fact that many people didn’t want to evacuate without their horses, cattle and goats added another level of complexity. 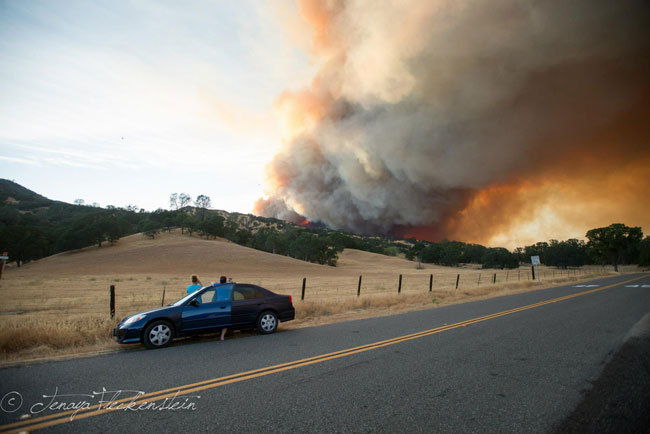 I can’t swear to it, but this looks like Route 29, the road Mom evacuated out on. Photo by Tenaya Fleckenstein. Find her page here and hire her –even for portraits without fire. She’s courageous as well as a great photographer.

So back to Mom. She has a support group of friends who had assured her, in case of any fires, they would evacuate her (and the community has been on alert with several previous fires that looked like they could be threatening.) But the Valley Fire exploded so fast and roared down the ridge so quickly, the Hidden Valley Lake community had less than five minutes to mobilize. Dozens of police and sheriff cars pulled into the gated community with megaphones blasting “Get out now. Get on 29 North.” To make matters more chaotic, those in Hidden Valley were evacuated north on Route 29, while people in Middletown, a few miles away, were evacuated south. So families, where some members were watching the High School game in Middletown, were evacuated in different directions from the rest of their families. It was controlled panic and my 85 year old mother, who is not supposed to drive outside her 10 MPH community and has some night blindness, got into her pick-up truck and joined a long convoy headed up a flaming highway into the night and down winding roads around Clear Lake. But after more than 50 years as an Army wife, this lady knows how to mobilize. I imagine it something like this. Only without the bar fights and the crashing through barricades. But with flames.


However, if I were writing the Hollywood script, I would cast Judi Dench, who could no doubt play older and sport a spot-on Vermont accent. I would add a scene where Mom puts large loud speakers with a boom box on the bales of horse feed in the back of her truck. She’d be blasting out “The Army Goes Rolling Along”. After decades of watching West Point parades as a cadet’s young fiancee, then as a West Point faculty wife and mother, and as a participant at decades of reunions, she knows how that song can get people moving.

Well, Mom reached the northern town of Clearlake where she is installed in a motel with a group of friends and being fed well by wonderful local organizations such as the local Moose Lodge. Tomorrow, Ranch Manager Louis and I launch Operation Extract Jackie by taking the long circuitous route way around the fire area and back around Clear Lake. I’m not entirely sure she’s ready to go. She and her new best friends are bonding into a support group. And again, the Moose and other great local community groups are feeding them great meals.

The only worry is her horse, Little Joe, who had to be left in the Hidden Valley Lakes stables. There is someone still there taking care of him and other horses, but desperately trying to get transport out for them. The police and fire roadblocks are not letting trucks in, only letting people out. But so far, the fire has swept in two fingers around most of the community and the CDF trenches and Route 29 are holding as fire breaks. Pray the winds don’t shift.

Another great photograph by brave photographer Tenaya Fleckenstein. See more of her pictures here. And hire her for your next portrait.

How You Can Help 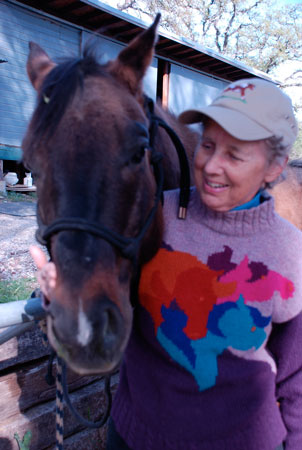 We are so lucky that Mom is safe and we believe her house is intact. We are worried about her horse, Little Joe, who is still at the Hidden Valley Stables. Someone is caring for him and other horses, but can’t get them evacuated out of there.

Now, for those of you who want to help, I can report that the Red Cross, which is running the main evac centers in Calistoga and up north in Kelseyville, is discouraging goods donations. I don’t want to disparage the Red Cross, they were doing a great job with early logistics when I ran up to the Calistoga evac center at the Napa County Fairgrounds. They seemed pleased with my trunkload of underwear and toiletries, but soon began asking for money donations instead of material. Again, not to denigrate the Red Cross, but they are known to use disasters as “fund raising opportunities” with monies going to fund their future efforts and not necessarily to the exact people you want to help. And given the nature of many Lake County residents, and the fact that many have lost homesteads that have been in families for generations, I think local efforts are going to be best, especially for rebuilding. Since so many evacuees had to turn livestock free to fend for themselves, it’s going to be as important to help restock as well as rebuild. Here are some groups who are local and tied to the community.

For long term help, I’m recommending this fund set up at the Redwood Credit Union, the largest local paper — the Press Democrat — and under the supervision of two of Lake County’s State Representatives. They are pledging that 100% of the money will go to victims, with a special emphasis on rehoming and rebuilding.

If you have food, supplies or clothes that you’d like to donate right now, the Loyal Order of Moose Chapter in Clearlake Oaks is doing a lot of heavy lifting running a shelter and feeding station. They have a registered charity here and are coordinating and happily accepting donations. Bookmark this Facebook page as they are making regular appeals.

Another shout-out has to go to the local chapters of E Clampus Vitus. This wonderful service and social group was originally established by Gold Rush miners back in 1849 and boasting Mark Twain as a member. These guys are always a hoot at Sonoma events, as they are dedicated to not taking themselves seriously. (They rally under the sign of the lifted petticoat.) And their “uniforms” are miners’ red long john shirts and medals made out of beaten tin cans. But when locals need help, these are some of the first guys to show up. They are feeding evacuees up where Mom relocated. I love the Clampers. Look up a Lake County chapter and I bet they are helping. And kiss a Clamper the next time you see one. 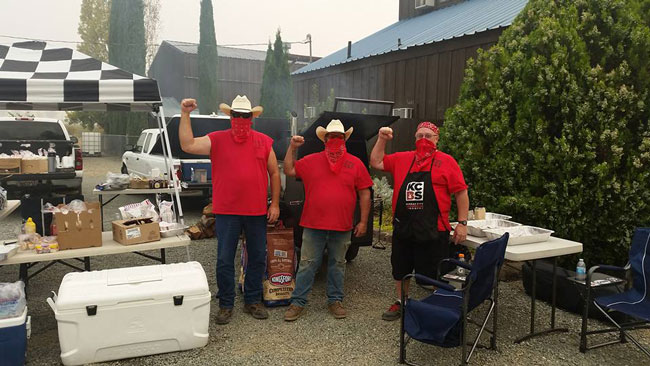 These Clampers serving at Sierra Ridge Winery posted this announcement: “Let James W Marshall Chapter 49 of E Clampus Vitus ( ECV ) humbly serve you and take your minds off of these trying times.”

Another need that will come up quickly, as soon as the roads are open again, is gathering and housing livestock and pets who had to be abandoned. There are several local groups mobilizing. I’ll pass those contacts along as the roads open.

There is also this Facebook Group which is an ad hoc collection of announcements, offers of help and appeals for help with missing pets and livestock.

But, in the meantime, you can’t go wrong checking in with local Moose Lodges and E Clampus Vitus Chapters. Both seem to be coordinating with local churches and other local organizations as well. It’s also interesting to note that Lake County has a large population of fire fighters, police and emergency personnel who work in Sonoma and Napa but were priced out of those counties. So many of these brave souls were helping save others’ houses while their own burned. Local police, fire and sheriffs departments may also be a good place to go, especially to get material and household goods donations directly to families who need them.

Note: Courageous Sonoma photographer Tenaya Fleckenstein (see her photography page here) has been taking some of the most stunning and harrowing photographs of the Valley Fire. Check out hundreds of pictures she’s taken of the Valley Fire on her Facebook page. Also she’s a great portrait photogarpher. If you need photography, hire her. 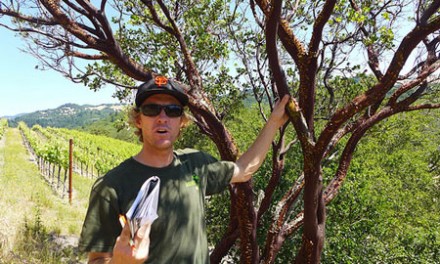 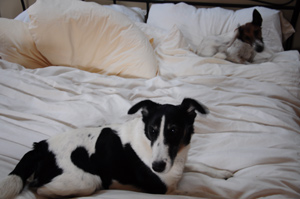