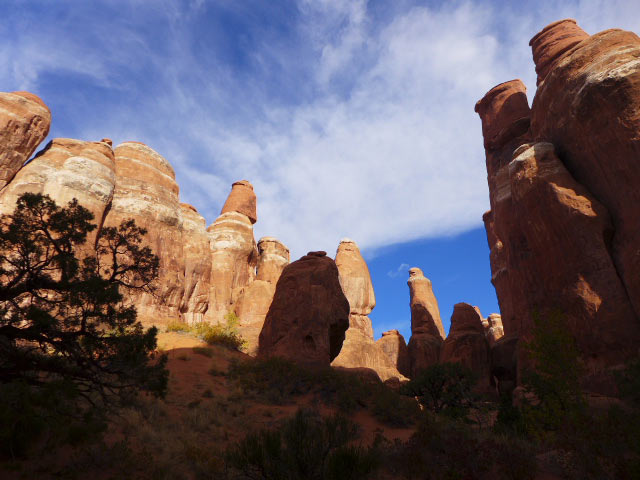 I’ve been in Moab for the last several days, famous as the gateway town to both Canyonlands National Park and Arches National Park. Except, each day here, I’ve done everything BUT visit those most famous arches. That’s where everyone goes, so I wanted to hit it during an off-peak time such as early in the morning. But I’ve had early morning calls on the last two days for guided hikes with the excellent outfit Hike Moab.

It was exactly the right call. Unlike a big outfit, Hike Moab is a collective of hiking and climbing enthusiasts, former park rangers, and amateur botanists and geologists. My first hike guide, Micah, explained that we needed to understand the concept of The Dirt Bag. That’s someone who lives to hike, pursues various schemes to fund that passion, and sees no shame in living out of a van parked down by the river. Micah noted that he actually owns a house, so he is Dirt Bag Fabulous. (He’s secured the domain name so watch this space.)

Micah’s hike was to lead us into the Fiery Furnace. This is an extensive maze of rock towers called “fins”. The Park Service only issues so many permits per day to visit it, and it used to be accessible only with a registered guide. They’ve opened that access up, so it’s possible to be a completely clueless and unprepared hiker, secure a permit and go in. BE YE NOT SO STUPID! After walking into the maze for five minutes, the eight of us in the group were already disoriented. Luckily, we had the excellent Micah to guide us. A veteran of hundreds of trips through the maze, Micah cheerfully pointed out all the wrong turns, dead-ends and dangerous slots we could walk into, except that he was steering us in the right paths. But even if you are so sure that you could find your way through, why go alone? Micah’s commentary — on everything from the geology to the biological soil crust (more on that later) to Everett Ruess to Edward Abbey to hair-raising stories about people who have recently died in the park — was more than worth the price of the hike. 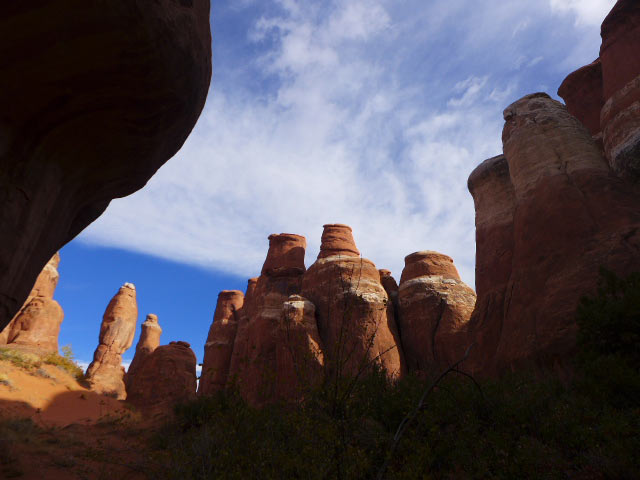 This may give you an idea of the many “fins” we walked through. You can almost imagine stone flames licking up to the sky. 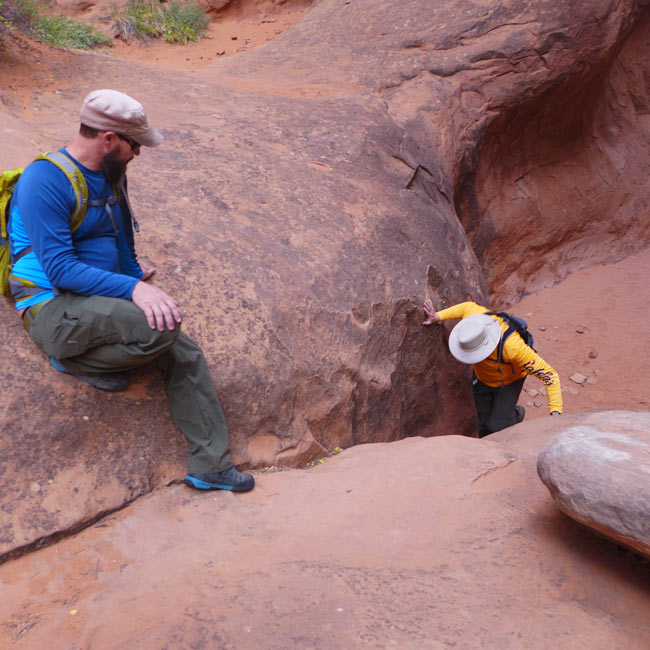 There was a lot of scrambling over boulders and crab walking over crevices. Here’s Micah talking us through the hand and footholds. 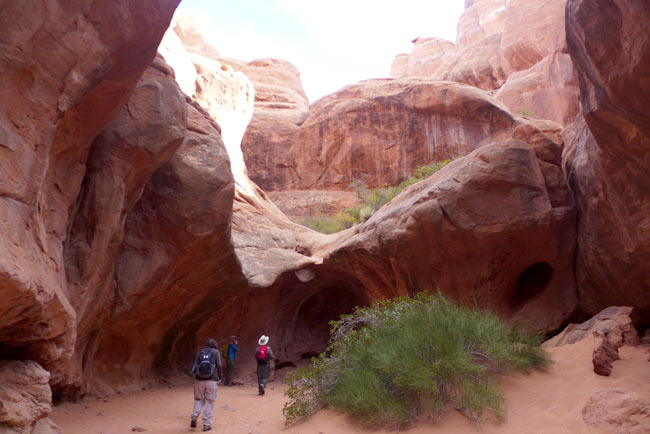 We walked under large rock formations. 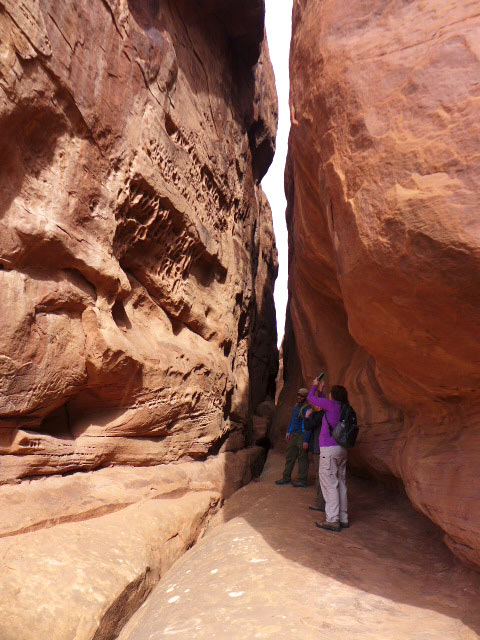 And squeezed through tight slots. At this point we were wondering who was going to cut an arm off if a boulder fell on us. (See Aaron Ralston.) 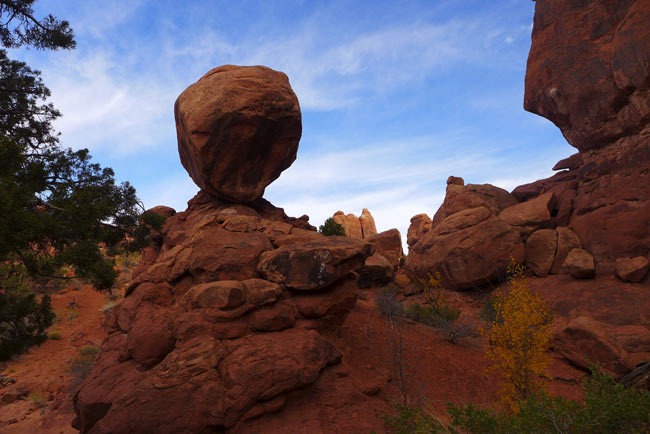 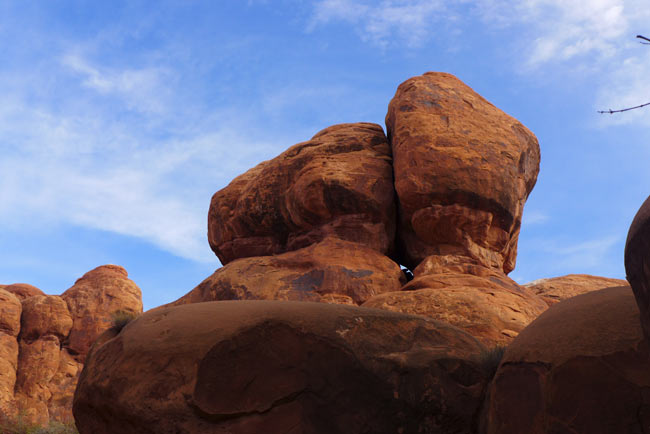 And fanciful formations. This is the Kissing Turtles. 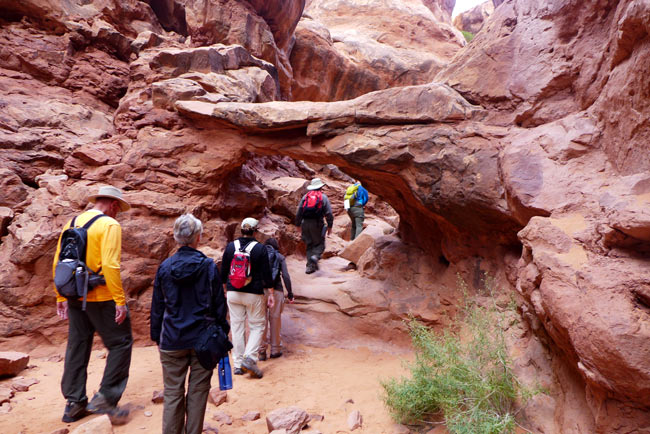 And we even passed under some arches!

Most importantly, Micah taught us about biological soil crust. These dense populations of cyanobacteria, mixed with lichens, mosses, green algae, microfungi and bacteria, are a crucial nutrient mass for desert plants. 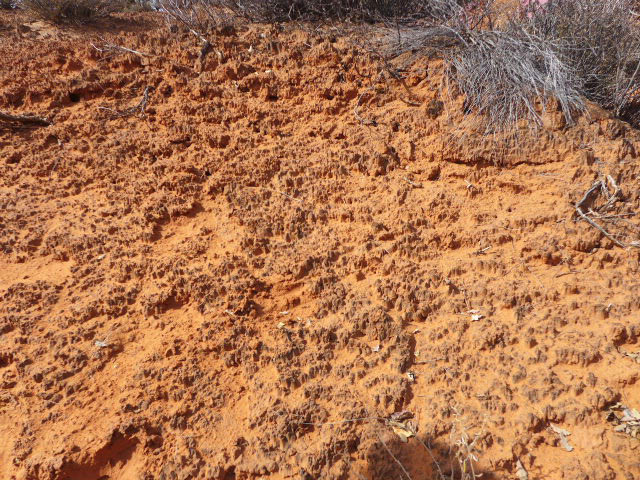 Think of it as a desert land-based coral reef. A mass like this could be hundreds of years old. Step on it and you can kill large swaths of it.

We ended our hike, enlightened, educated and entertained. Thanks, Micah!

The next day, I had another adventure planned with Hike Moab, this time to Canyonlands National Park. The manager gave me every opportunity to back out, explaining over and over that this particular hike was largely a driving tour with a few small hikes to viewpoints. I explained that I’ve been driving an RV for hundreds of miles. I would pay anything to have someone else drive me around. But, of course, the chauffeuring was the least of the value. 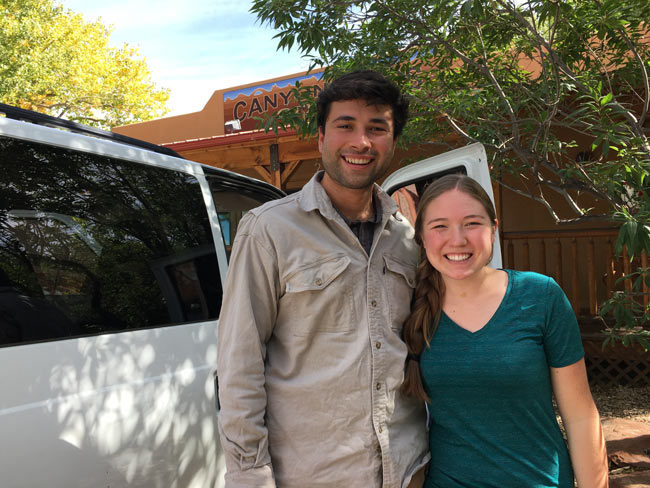 Today, my guide was another Micah — we’ll call him Young Micah — and his charming sister Kendra.

Micah is actually just starting his guiding career. In fact, I was his first client, so I pointed out to him that I was his BEST client. Kendra wants to be a guide so she tagged along. But she’s a veteran of an Outward Bound type program, so she can build a fire without matches, make a shelter and survive in the wild. Good to know even if the tour is just a driving one! Both are members of the local search and rescue volunteers, so I felt safe that I’d be taken care of if a boulder fell on me. 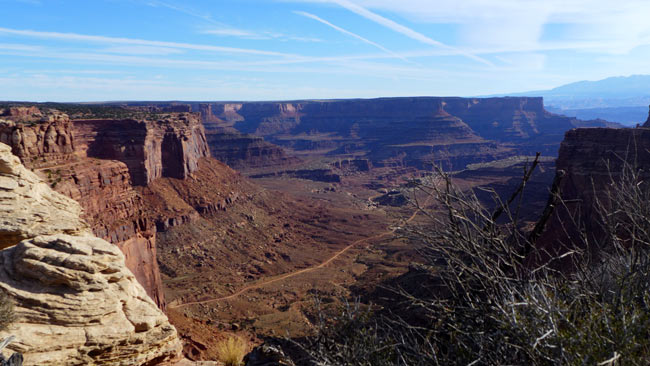 Turns out driving is a perfect way to see canyonlands. The views are all from the road and most of the trails you see at the bottom are actually for ATVs and bikes. 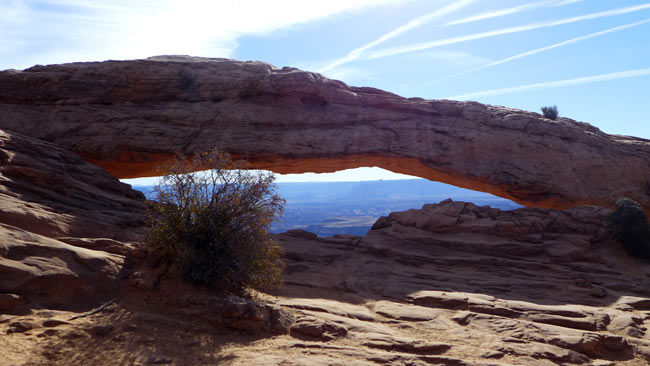 Hey, wait! An arch. I was saving that for tomorrow. 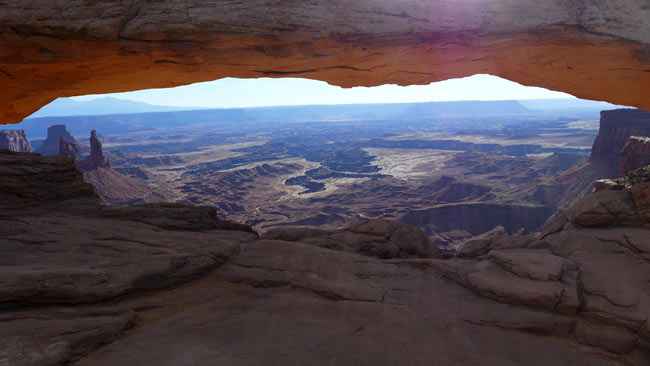 The view through this one was spectacular. 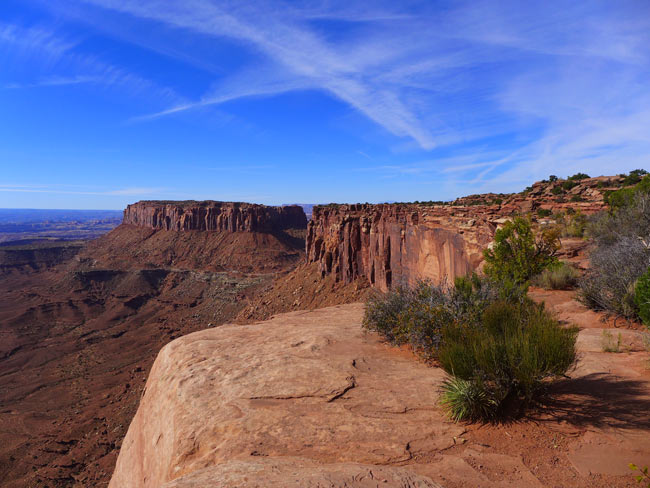 The area of the park we were in is called The Island in the Sky, because it’s a large mesa looking down into eroded craters and canyons. 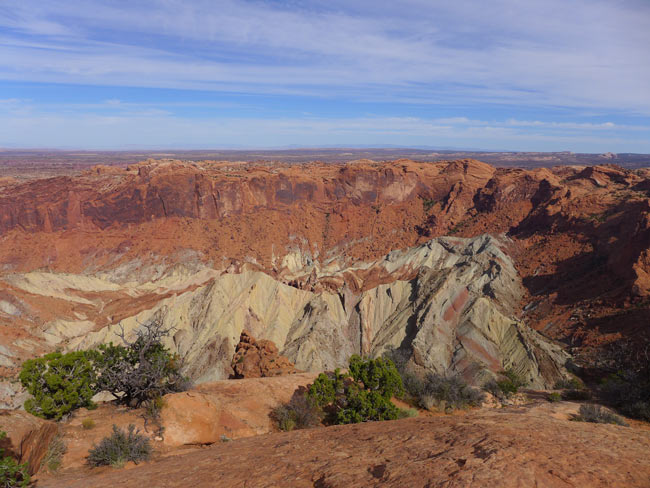 Speaking of craters, there is this one. How it formed is a mystery. Was it an asteroid that hit and vaporized? Or was there a thick layer of salt that eroded and caused a collapse? 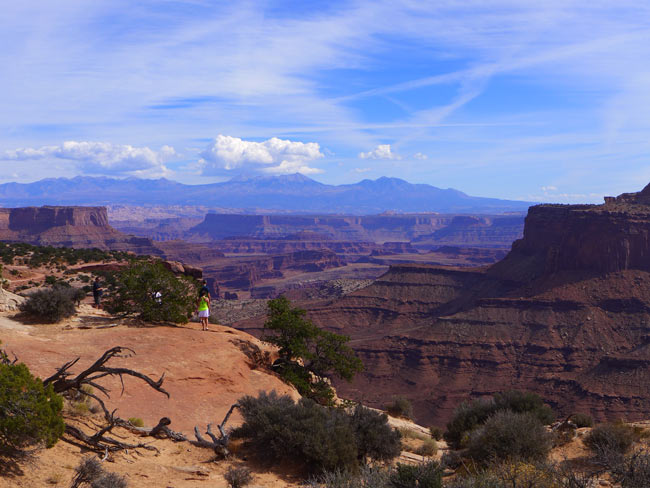 Young Micah patiently answered all my questions about Juniper trees, cacti and rock formations. And explained the weather patterns over the distant La Sal mountains.

All in all, a wonderful few days in Moab, mostly thanks to the excellent Hike Moab. If you come to Canyonlands or Arches, be sure to give them a call! And tomorrow, before I take off for Colorado, I’m going to go see those arches. 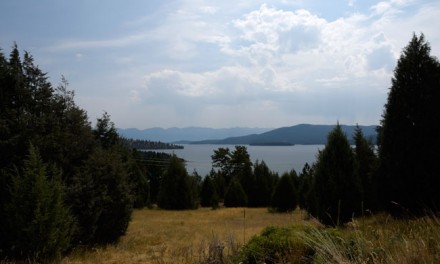