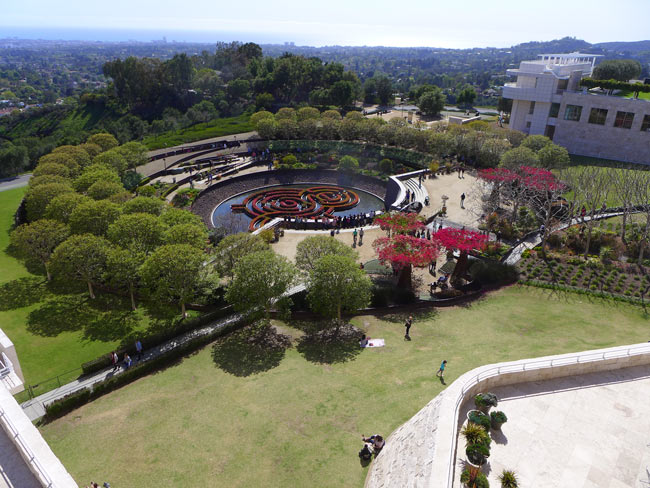 I haven’t talked enough about Ranch Manager Louis’s role in the ecosystem of Two Terrier Vineyards. His responsibilities are varied and far-reaching. Just in the matter of plants and terrain, he oversees erosion control, eradication of invasive species, and the replanting and nurturing of our Native California plants. In recent years — and after I had to fire three landscape designers, mostly because they just wouldn’t believe me when I said I ONLY wanted drought-tolerant California species — I promoted him to Landscape Designer. And we’ve never looked back. If it is possible, Louis is even more of an authoritarian on the California Natives Only Rule. He would tighten the rule to include only California plants that are native to this specific region. However that rule has been bending recently since we are discovering some little microclimate areas where Southern California natives are perfectly happy. Since the house has been under construction, Louis and I haven’t really let loose with our landscaping mojo. We’ve worked around the vineyards and edges of the house area that aren’t in the way of earthmoving equipment and construction crews. We managed to do a nice back garden area and a small terraced entrance desertscape with minimal casualties from construction guys stepping on them. But now construction is over and only fine work in the house is continuing, we’ve had an El Niño and we’re in the middle of another record wet year, so we are full speed ahead. 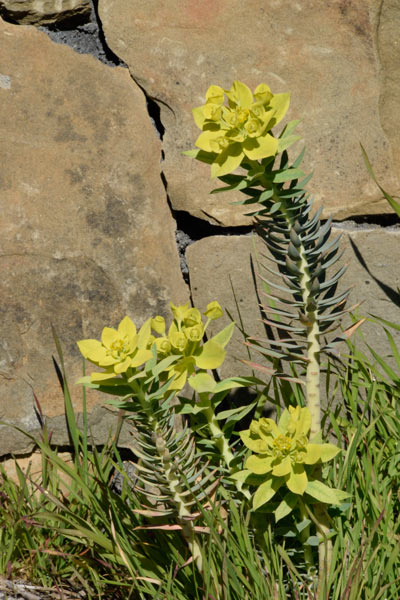 The “Louis Trademark” is interesting succulents framed against rocks.

Let me pause here to give you an idea of Louis’s particular aesthetic when he is wearing his Landscape Designer hat: 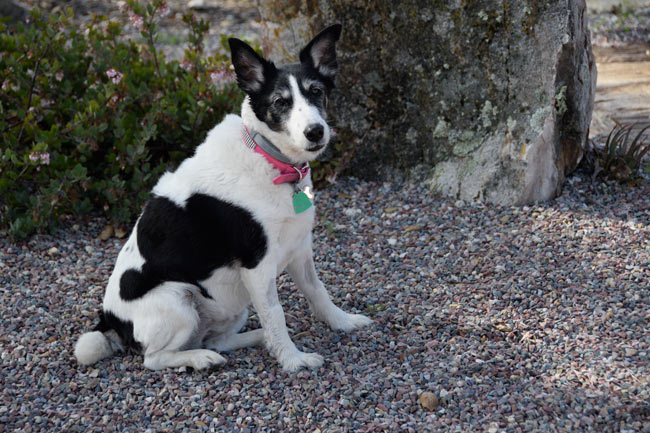 Louis carefully chooses rocks for their mineral veins and interesting lichen patterns as garden features. Then we accent with terriers.

If you are sensing that Louis is not afraid to push back, you are right. And that’s all to the good. I come to him with what I want. He tells me what I’ll get. Which is what Nature dictates. And the results have been fabulous. Even in the more formal parts nearest the house, the plantings look natural and each plant is showcased for what it is with its individual “plantness” on display rather than just being a cog in a landscaped mass of greenery. What I particularly like is that where the landscaped areas touch the wild areas of the property, the transition is gentle rather than the hard delineation you so often see around here where an overwatered Tuscan garden suddenly ends and a dry California oak and scrub landscape begins. 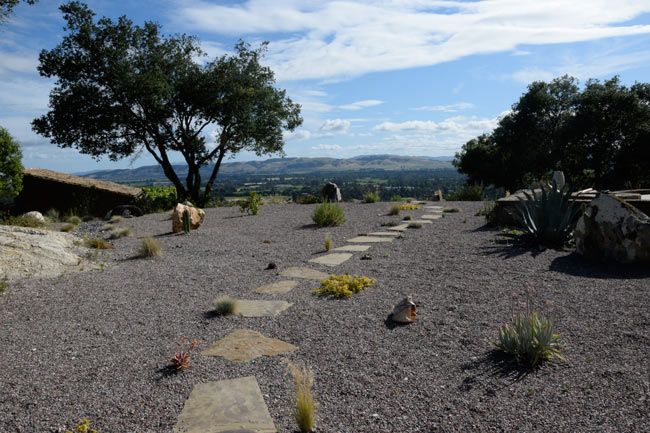 Our slightly more formal back garden is still a work in progress. Louis envisioned and created the “vanishing edge” into Sonoma Valley.

But back to Number 6 on Louis’s rules of aesthetics. I have been warning — pleading really — that I would kind of like maybe one thing that is a little more composed just in the courtyard of the house. Since it’s near the main entrance, and will be in proximity to a series of miniature citrus trees in pots. I thought we could get away with a little more formality and justify a little bit of irrigation, especially since irrigation lines will be running to the potted citrus.

I showed Louis some pictures of a succulent planting I particularly admired at the famed gardens of the Getty Museum. What I liked was a swirl of succulents, tightly massed and planted in a design pattern. We talked it through, we planned it out although Louis felt he had to warn me: “You know this is not a natural way that succulents grow. They will need more water and the plants won’t live as long massed this way. So we have to commit to the idea that we’ll be replacing things on a regular basis.”

Then Louis, who is famed for his colorful language, pronounced the plan “a clusterfuck of succulents”. But surprisingly, he got very excited about it. He started planning out loud how, instead of the Getty’s abstract design, he would make a faux arroyo out of contrasting masses of succulents, and create the whole planting on a slight incline so the pattern is visible from across the courtyard. Thus we decided on what I’m sure Louis will always refer to as my “Succulent Clusterfuck Gardens”. 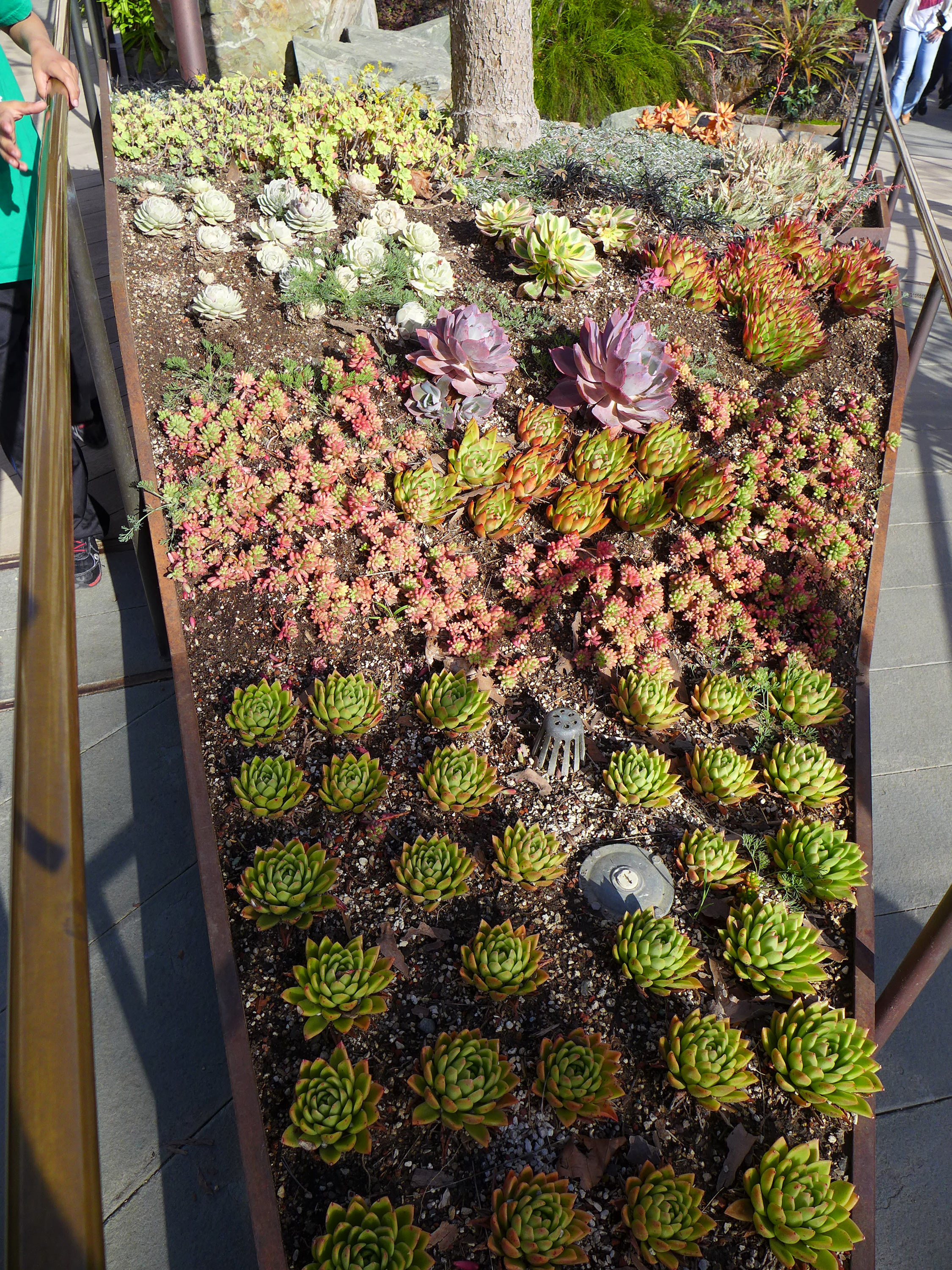 I had admired some of the small strips of succulent plantings the Getty had arranged in patterns.

Next step, Louis poured over my photos from the Getty, which unfortunately focused on the patterns but told Louis nothing of what he needed to know about how the plantings had been done. We got on Amazon and tried to find books that would cover the subject. While you can find books on how to keep a cactus alive in a pot on your kitchen counter or how to create a little potted succulent garden. There doesn’t appear to be even one book that seriously addresses how to create a clusterfuck of succulents. I joked that Louis would have to write that book and took off to San Jose. 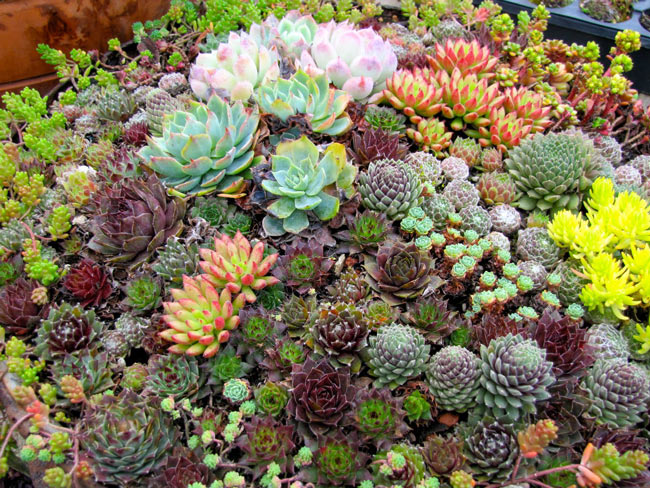 I mentioned I wouldn’t even mind something this massed. Louis calls it a “Succulent Clusterfuck”.

The next day, a storm blew in and Louis was unable to get to the Ranch with all the washed out roads. So he spent the day on the computer researching. But Louis is sometimes skeptical of what plant information he reads on the Internet. He likes to know he’s hearing the straight scoop from an expert.

So later the next day, he called to tell me: “I didn’t want to screw around here. I called the Getty and asked to speak to the Head Gardener.”

“Oh they connected me after I kept insisting that I only wanted to talk to the man in charge of everything. I lobbed a few tough plant questions at him just to see if he really knew his stuff. He did the same to me. We figured out pretty quickly that we were on the same level and we talked for about two hours. Nice guy. I ran all our plans by him and he told me some of the things to watch out for, some of the things he’s had trouble with over the years. We’ve got the whole Clusterfuck worked out.”

At this point, I’m doubled over and nearly on the floor. Because this is SO Louis. Of course — OF COURSE — he would never question that the man in charge of arguably the most famous and celebrated gardens in the United States would want to participate in our slightly more modest plans at Rancho Los Dos Terriers. You see Louis doesn’t care if you are a head of state or a hobo. He has two criteria (and I put this in Louis Language): 1. Do you know your shit? and 2. Can you talk about it without bullshitting? Apparently the head gardener at The Getty passed that test with flying colors. The Getty gardener must operate under the same criteria because, clearly, kindred spirits.

So there you have it. My landscaping, at least the Clusterfuck portion of it, is being co-designed by the man in charge of the Getty Gardens.

And there is a coda to this story that needs a little background. There has been some friction between Louis and our architect who is decidedly NOT a California native plant fan. The architect who, bless his heart, has a huge emotional investment in the property, foresaw a classic formal Tuscan garden surrounding what he considers his masterwork. Yeah, that wasn’t happening. Unfortunately, the architect did make public his opinion that what Louis and I were doing was “all wrong” for the house. So there is — shall we say — some tension between the two. A day after Louis met his new best friend at the Getty, I phoned him with an interesting tidbit I learned. Apparently, Richard Meier, the architect of the Getty Museum, and the Landscape Designer, Robert Irwin, had a famous and high-profile feud. Irwin thought the museum design was “pompous” and envisioned less formal gardens to counterpoint it. Meier was so furious and so opposed to the design, that even today when he stops at the Getty restaurant for lunch, he turns his chair away from the gardens so he doesn’t have to view them. From my reading, one of the few people who could act as go-between was Louis’s New Best Friend.

“Yeah, I know,” Louis said. “We talked about that. Fricken architects.” 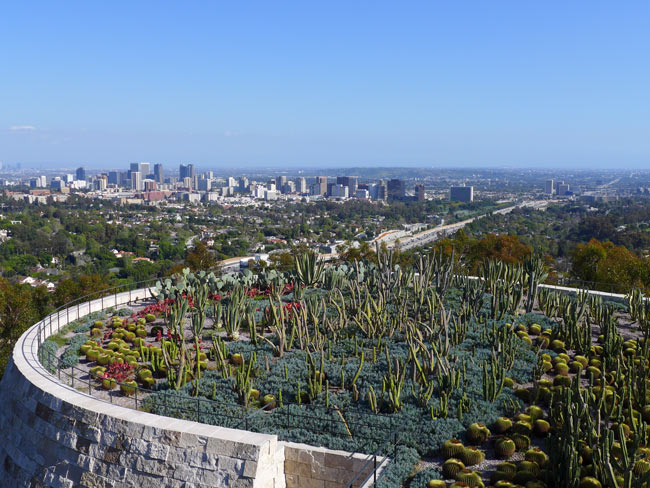 Now if Louis can only recreate the Getty’s floating cactus garden for me. 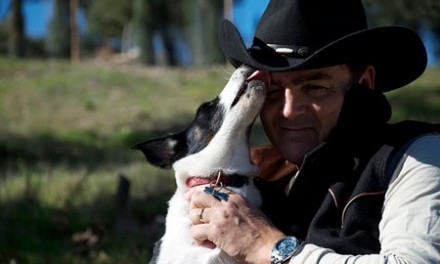