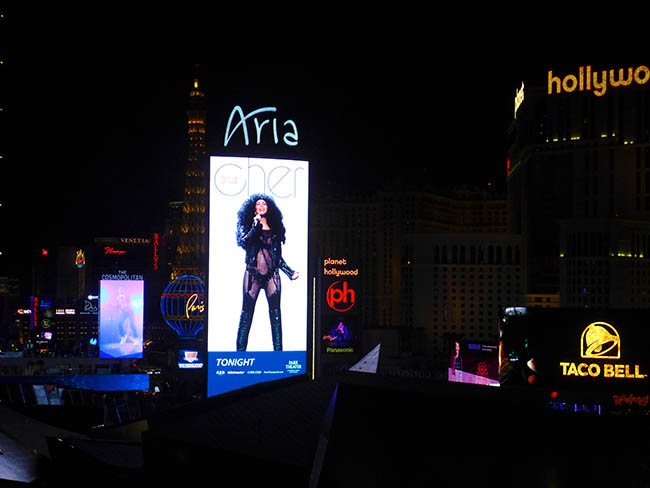 From standing by helplessly not knowing if everything we owned in Sonoma would burn to the ground, through the first rushed recovery efforts when we tried to shore up burned areas against erosion as the first rains loomed, to the horrendous clean up process that found me picking up burned creatures with piles of wet, oily, ashy leaves, it’s been an insane six weeks. I needed therapy. I needed Cher-apy! Cher is doing her latest farewell tour in Vegas. I live five minutes from the airport, it’s an hour’s flight to Vegas, so, for me, it’s like taking the bus to a concert. Besides, fire aside, I don’t want to think that I could leave this earth not having seen Cher live.

So here I am for a weekend in Vegas. Just me, myself and I doing the kinds of things no one else would want to do. Just me and Cher, that is.

My first splurge was the Mandarin Oriental. My first criteria was a nice hotel in walking distance from the Monte Carlo where Cher is performing. My second criteria was a place with no casino. The Mandarin fits that bill, even if I didn’t really bring the wardrobe I should have for the experience. This is definitely the upscale experience and here I am in my REI clothes. Well, I like comfort.

Here’s the thing about the Mandarin. It’s beautifully appointed for a solo traveler, but it might just be too much togetherness for a couple. One side of the room has a bathroom “cube” with translucent panels. So, when one person goes into the bathroom and turns on the lights, well, there’s your floor show. 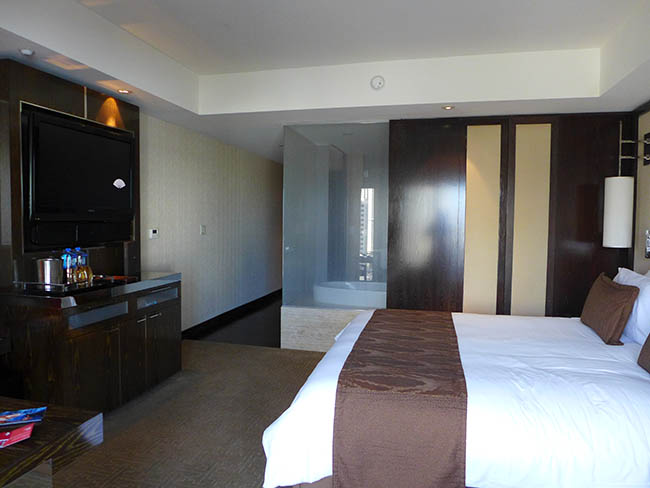 But for the single traveler, it’s convenient to be able to watch MSNBC while taking a bath. So 5 stars from me for the Mandarin. 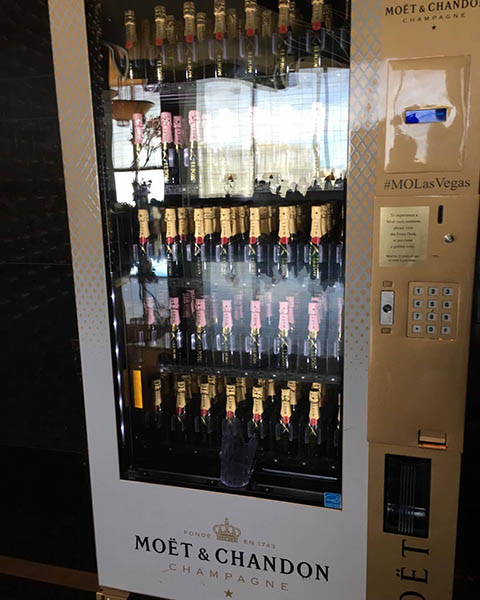 Did I mention that this is the vending machine in the lobby?

So my first adventure was something I’ve been trying to talk up to friends for a while now with no success: The Mob Museum. Let me just say, it’s fantastic. It’s housed in the old post office where some of the Estes Kefauver hearings on the mob were actually held. It’s chock full of interactive displays, delightfully wise-guyish videos and artifacts of the Mob (Bugsy Siegel’s lighter, menus and items from the original Flamingo, a real electric chair.) 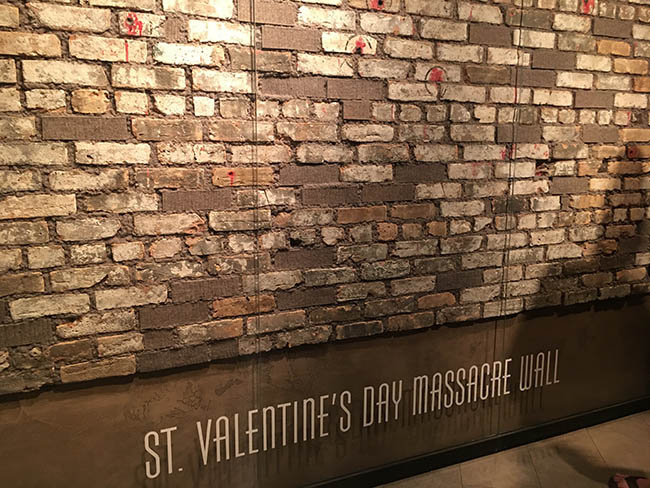 How about the actual wall against which the St. Valentines Massacre took place? Complete with bullet holes!

But that’s just the fun stuff. It’s actually a fascinating and comprehensive look at how organized crime — particularly the Mafia — took hold in America, how they ran their operations, and how their power was finally broken. I should note that there are docents on every floor who are perhaps just on the edge of being too enthusiastic with their gory tales of how various Mob members met their demise.

We had a moment of time-jumping synchronicity when a group of us went into one of the presentation rooms to see dramatically edited footage of Mob guys being forced to testify to the Kefauver investigation. The narrator said, “Many Mob figures developed a form of “amnesia” that was quickly dubbed “Kefauver-itis”. Cut to a montage of clips of various Mob figures saying, “I don’t remember. I don’t recall.” When the audience burst out laughing, I knew we were all referencing Jefferson Beauregard Session’s testimony. Ah, the more things change…

Here’s another fascinating thing I learned:

You had to have Sicilian blood to be a fully made man, so the Mafia was, by nature, segregated. So what? African Americans were some of the greatest Mob crime fighters around:

*Eunice Carter, the first African American woman to earn a law degree in New York, led the investigation that put Lucky Luciano in the slammer and broke his bootlegging empire.

*The Mob had long fixed sporting events. Mohammed Ali was the first heavy-weight champion NOT owned by the Mob.

*Junius Kellogg, Manhattan’s first African American scholarship student, had everything to lose and nothing to gain when he was approached to flip a game in what would be the largest betting scandal in basketball history. He refused, went to the Feds, wore a wire and helped put the Mob backed fixers in jail.

I spent hours at the Mob Museum. I could have spent more. Even if you don’t really care about the Mob, but you are fascinated by the ambiance of Mobbed up Vegas from the Rat Pack era, I should note that there are plenty of displays covering the look, feel, menus and ambiance Dino and Frankie would have enjoyed. In fact, in various places throughout the museum period Frank Sinatra and Dean Martin songs play over the loudspeaker. Definitely recommended.

The Mob Museum is way out in the downtown area near the Fremont Experience. So I was treated to a driving tour of much of Vegas thanks to an Uber driver who had a couple of pick ups to make in all four corners of the city and wasn’t exactly clear on the best routes to get there. Turns out one of my fellow passengers was a nice young gentleman who was treating himself to Vegas after several months of helping his mother clean up her Houston home after the hurricane and floods. So apparently Vegas is a good place for disaster recovery therapy.

Since I am here to chill, my only itinerary for the evening was strolling around my area of the strip and doing a fun dinner. I ended up at the Sage Restaurant in the Aria. I opted for the tasting menu, which is always fun. It usually takes the form of a six course meal with each course just being a bite or two of what the chef thinks is the best expression of the season’s bounty.

One big kudo I have to give the Sage: they treat single female diners beautifully and that’s not always a given. I manage to glom on to a lot of Andy’s business travel but that doesn’t include me at business dinners. So I’ve probably found myself dining out alone more than most women. If you are going to a more casual restaurant, a single woman will probably be seated at the bar. Which is usually fine. Bartenders are very good at catering to single customers. But restaurant experiences tend to be mixed. First, they often won’t give you a reservation and secondly, they tend to hide you near the kitchen as if the thought of a single woman dining is so depressing that it will put other diners off their food. 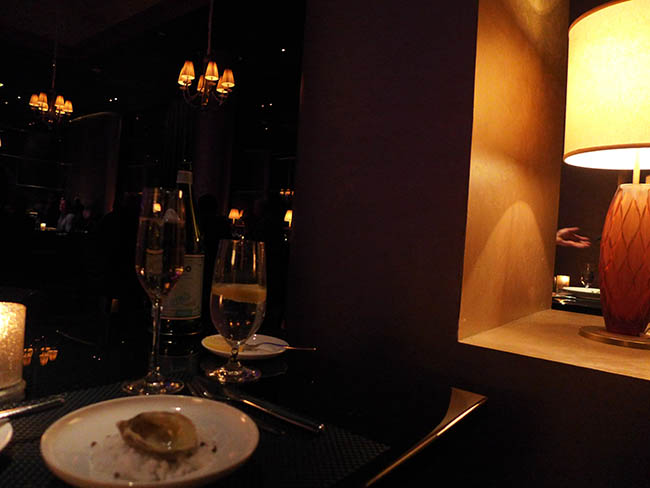 The Sage had a number of semi-private alcove dining spots with a commanding view of the restaurant. They sat me there. Take note all you single ladies.

There are other tricks I use when dining alone, especially since restaurants seem to want to rush single diners right out of there. And a tasting menu is not something you rush through. For instance, I always carry a Moleskin notebook into which I furiously scribble notes while I take pictures of every course. 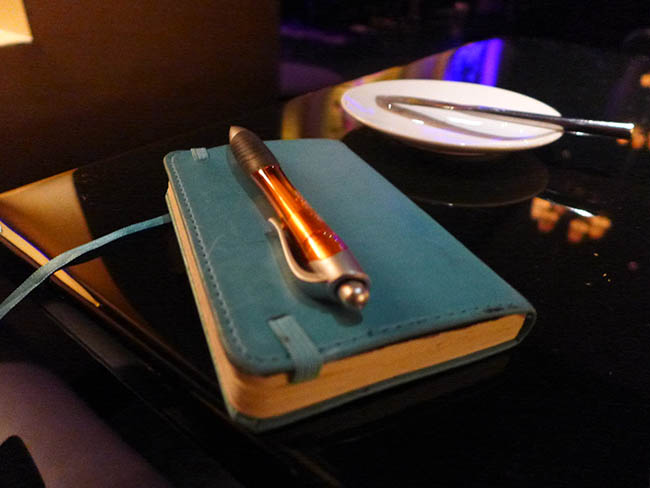 Whether they think I’m the second coming of Mimi Sheridan, at some point I find it improves the service.

I have to say, the Sage had stiff competition in the tasting menu department. Andy is a huge fan and — from London to Florence to Paris — he’s taken me to some excellent ones in fantastic restaurants. But the Sage’s certainly held up to scrutiny with beautiful presentation, earthy fall tastes and a nice balance of flavors. If I had a criticism, it might be that there was a tiny bit too much salt in some of the dishes. And the chef was still enamored of “foam” which was a culinary trend that I thought was blessedly behind us. I always thought it looked like spit on the plate. I will give the Sage chef points for expertly disguising his foam. 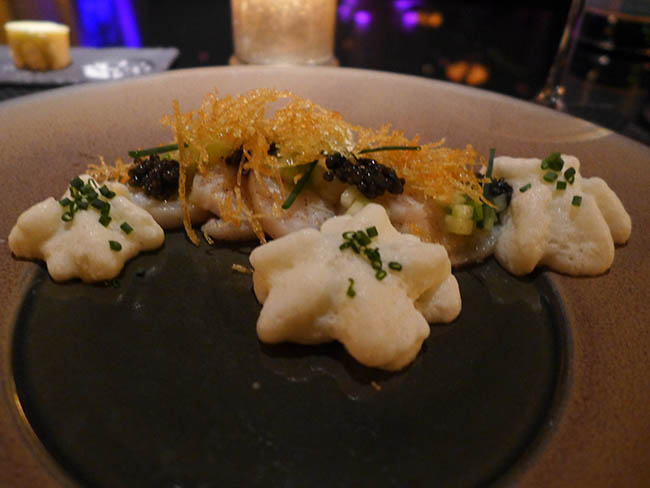 This was an appetizer of sturgeon, caviar and potatoes. I dug in thinking those star shapes would be potato. No, it was FOAM. Well, good fake-out.

Here’s the dinner in order: 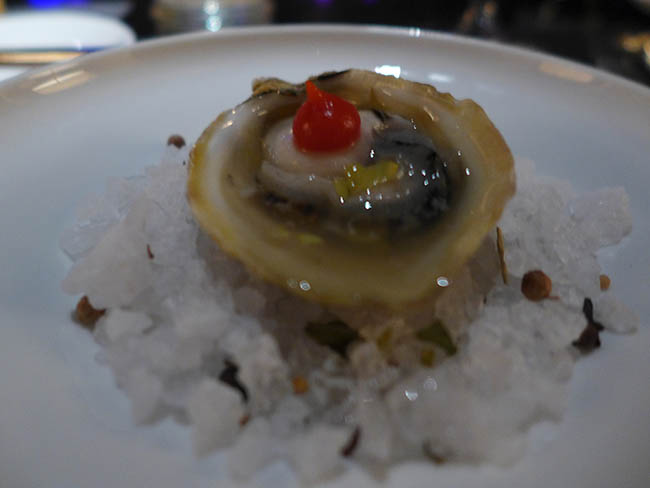 A single oyster in a twist on Rockefeller style. Followed by the sturgeon dish with the fake-out foam. 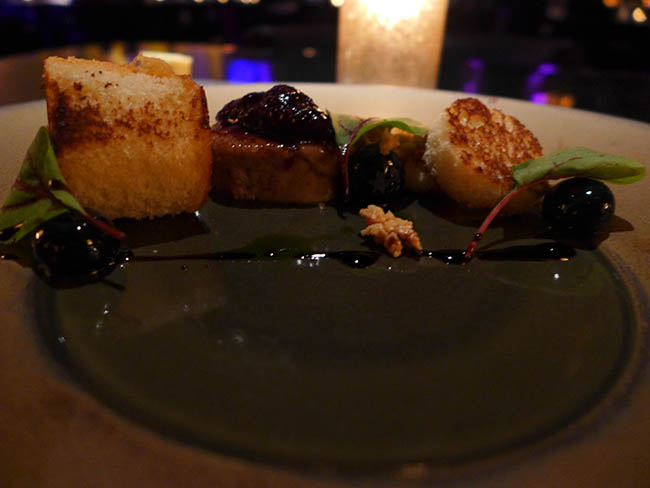 A tiny torchon of foie gras with blueberry compote, blueberries and soft croutons. 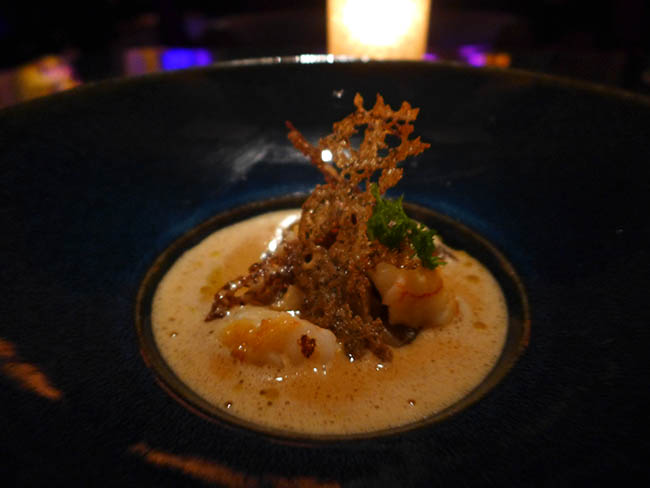 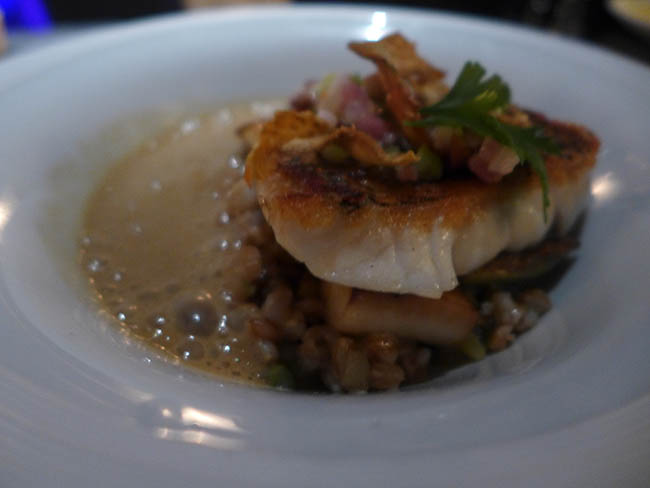 Two bites of perfectly done sea bass on an earthy bed of fall vegetables. Okay, the sauce was foamed, but was still great. 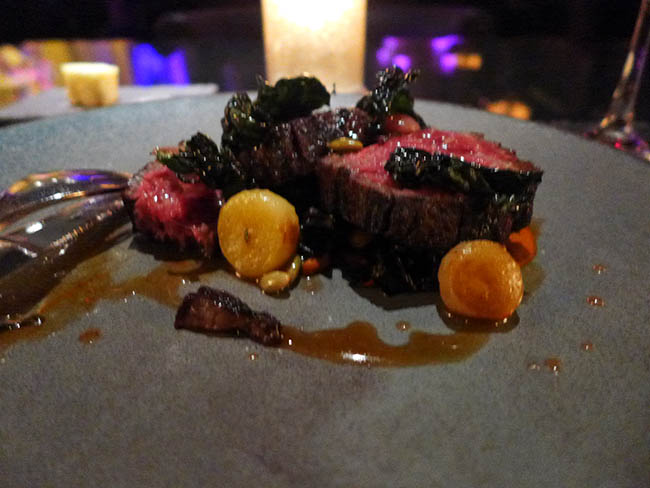 Three bites of seared but still rare Kobe beef. And I finally got my potatoes! 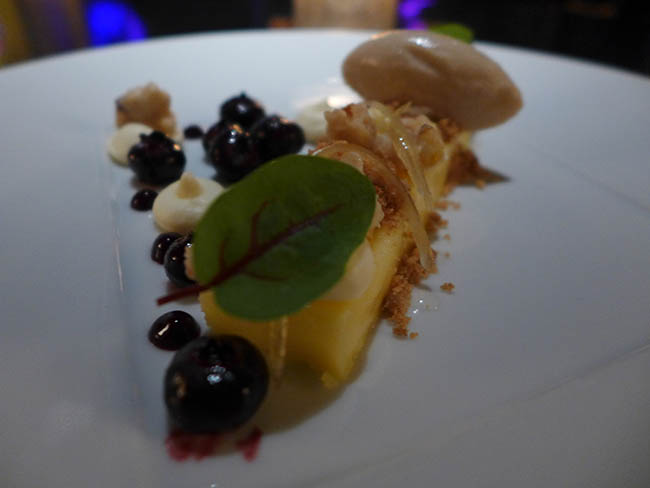 Finishing with a lovely sliver of very tart and lemony lemon tart.

So kudos to the chef at Sage — even in light of the foam. This dinner does seem to be the Full Mnuchin, but I reviewed a lot of restaurant menus and prices before I made my decision. Most high end restaurants in Vegas are very expensive. The Sage’s tasting menu priced out significantly less than would an appetizer, main and dessert at one of the celebrity run restaurants near me. So I counted this a bargain as well as a more fun experience than just ordering a la carte. For a splurge, it was definitely worth it. Even with the foam. 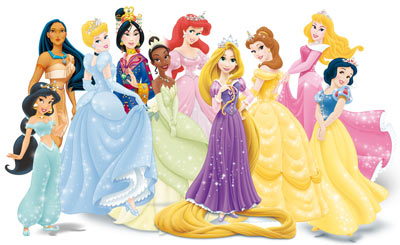 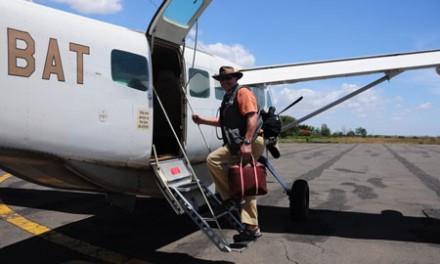